21 Ways To Never Get Bored of ETS2

Finding it tough to stay invested? Old areas bother you as ‘stock’ or ‘boring’? Don’t play this game anymore after spending countless hours on it in the past and you miss that spark this game gave you? If so, stick to this guide and I will take you on a little journey of how to spice ETS2 up!

I adore this game, I really do.

When I was younger, sometimes driving across Europe to see your family was still cheaper than flying. Taking ferries, driving long distances with sandwiches and drinks packed, and stopping at service stations to refuel, it was more than just a drive but more of a memorable adventure.

This ‘simulator’ (albeit in a truck) is the first real thing we have of properly simulating European driving. I’d hate for the community to suddenly die off one day! This won’t happen but there’s a story behind this guide.

There are discussions I see, on the internet and forums, that the game interest has dwindled. Except, even if that is true, the game developers are constantly surprising us with new free and paid content, and that isn’t likely to stop anytime soon. I find these kinds of discussions slightly irrational and dramatic that one day, we will have no new content. We might, but that day is far into the future!

So here are twenty-one tips to keep your experience fresh and juicy (pardon that last word, I entertain my own idiocy in these comprehensive guides).

Use some of the loans available at the start of the game for a quicker start, ideally the highest loan. Buy a truck you are most comfortable with, and level up to unlock all the customizations. Keep the loan and don’t pay it off – let it come out of your money every day.

Then, keep delivering, levelling up, and build up slow. Buy one garage, hire one driver, let him grow. Don’t fill the garage with drivers and don’t expand the garages just yet. Instead of hiring a dozen drivers and buying a lot of garages, start driving with one or two drivers. Their salaries can help you offset the loan faster.

You don’t want to own everything very quick, and build up a high balance, or the game might get boring. Build enough money to spend, and have some extra money in case your truck gets damaged.

For example, 500k in the bank can get you a small garage and a nice cab for one of your new drivers, whilst leaving funds for fuel, repairs and other costs. Aim to hire a driver with a more-than-basic truck for every 500k you have.

If you’ve played for many years, this may feel painful to do. Your spark for this game can be relit by simply creating a new profile. Of course, keep your old profile in case you want to come back to it.

A lot has changed since this game came out in 2012. Custom intro screens, rebuilt countries, new DLCs (perhaps you can start in a different country?), new trucks and trailer types, and even new garages. Sometimes its worth starting with a clean slate!

I keep a spreadsheet of my favourite routes. Columns include origin, destination, distance, sights on the way, reasons why I chose the route, and an estimated time the route should be driven at. For example, a night drive from the Carrara quarry took me past beautiful parts of Italia DLC, and into reworked Austria through Klagenfurt. Lovely little drive with oversized cargo! 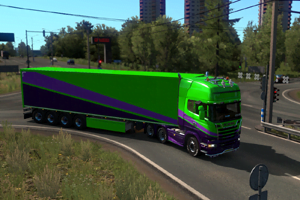 Buy some trucks and some owned trailers, and try designing a livery for different garages, to get a feel like you are managing multiple companies.

Have all drivers and trailers in one garage use a certain colour, and do the same for other garages with a different paintjob.

5. Drive in one area then use quick travel

Some players like to drive in a realistic manner – from point to point, and not teleporting. However, driving in the same area or driving long distance can become tiresome. A change of scenery can be of great help – its a good idea sometimes to do a lot of routes in one country / area, and then using quick travel to cut out the long delivery between Iberia and the Baltics for example.

6. Sell your truck or gift it

I like to sell my truck as soon as I pass 40000km or when I’m in a position to afford a high spec truck, and I do it just to spend money. Buying a new truck then gives you a feeling of “I just got this fresh truck from the dealer, look at me!”. You can either sell your truck, but I find giving it to a new driver works also. Then they have a higher spec truck available from the start, and don’t have to struggle dropping or not delivering cargo.

7. Spend a lot more time in the truck customization menu

Dating back to December 15th, 2015, developers left these two notes :
“Hired drivers are more efficient when equipped by good truck”

My advice – spend more time in the truck and trailer customization menus. There are so many options and mods can be installed to enhance the cabin interior. In turn, you can give each driver their own personality, and as a bonus, you can increase their profits by them having a higher spec truck to work with.

No, this is not a joke. This is genuine consumer advice!

I drove recently between Brasov into Kosice and was surprised at how well the game can be played when going on single-carriageway roads. I was surprised also at how much time it took me to drive between those two locations; more than double the time I’d spend on motorways.

And I found little details like a TV inside a house in Cluj-Napoca. No word of a lie, this wasn’t a texture on a window; the TV was inside! Small details like that make all the driving worthwhile.

9. Invent your own challenges and achievements 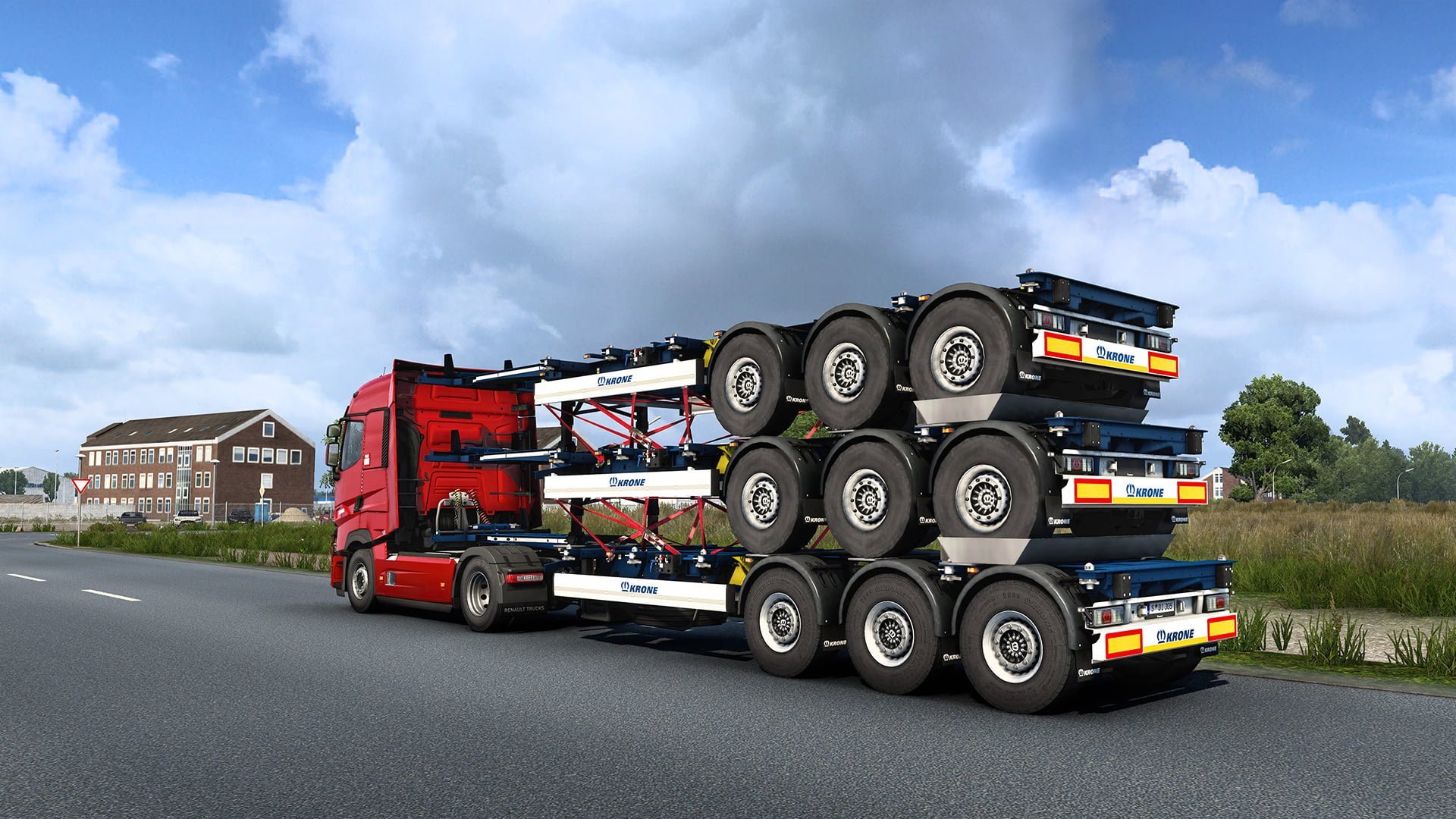 For example: make five deliveries of trailers from the Krone factory, go from Lisbon to Marseille in a single day at the speed limit or I don’t know … try and flip your truck 😀 (no don’t do that). But you get what I mean, right? So get creative!

Iberia DLC has introduced viewpoints into the game. Over 50 viewpoints can be visited in the game. Players can visit these, watch a cutscene, and take cinematic screenshots or snap short videos if they want to.

11. Upload to World of Trucks

Refresh your WoT screenshots more often. You have six slots you can use, and it is a good idea to show off your truck, your fleet and your photography skills.

12. Take pictures of the world

Every (or well, a very large majority, if not all) screenshot I see on WoT or on the Steam Community features a truck. For a game that is intended to showcase trucks, this shouldn’t turn heads.

I will be bold and say that ETS2’s world is simply outstanding, one of the better maps designed for any game on the market. You might have an argument if you for example say GTA V has an amazing world. Except it’s a different game style (open world, not driving), the map is fictional and limited to an island, and it’s sort of what we are used to seeing in every game.

Euro Truck Simulator 2’s world is varied, in vegetation and climates. Rolling hills, trees suited to each country, road markings, signage – all unique and worth documenting. I often see pictures of environment during development, but there isn’t many from players.

Coupled with the new lighting system introduced in 1.40, the game looks even better than before.

If you are a vanilla player, take note of this section – don’t skip it straight away.

You may decide you may want to mod your game, or leave it ‘vanilla’. Some of these mods can be essential.

In my humble opinion, ProMods[www.promods.net] is the highest quality map available for the game, adding unavailable countries in the base game such as Andorra, Georgia, Iceland and more. It also expands and reworks plenty of content, in a smart and realistic way, such as rural parts of United Kingdom – a rework that is highly requested for the base game.

I also recommend RusMap, however I think all others can be troublesome for the profile save and the performance. Especially when ProMods is updated regularly by a dedicated team, whilst all other mods don’t always have that luxury.

Self-explanatory – install TruckersMP and experience online play for Euro Truck Simulator 2. Use the guide above for full instructions.

The in-game radio player is very limited; it can only handle MP3 and OGG streams. Most European radio broadcasters have switched to more modern formats.

ETS2 Local Radio[github.com] mod by Koenvh alleviates this problem. No more having to update radio_streams.sii file! And, the bonus, the radio can auto-switch and play radios from the region you are in-game.

Install a custom voice for the GPS system. Or get a sound pack that adds little touches like closing and opening your cab’s door when refuelling at a gas station. Try rolling down your windows and hear the sound of the wind passing and entering your truck.

Virtual Speditor mod by Xyzan allows you to add your own jobs in the game. You can select various options when creating a job – origin, company at origin, destination, company at destination, load type and the load urgency. Once you are done, you can import those jobs into your savegame. The tool, whilst useful can be clunky so follow FAQs really well.

For example, when unpacking, it can throw errors. Make sure the directory IS NOT set to read-only using Windows options, and that Visual C++ Redistributable 2012 Libraries are installed on your system.

The Steam Workshop features plenty of liveries / paintjobs to keep you excited for trucks and trailers. These can vary so I recommend spending some time to find some of your favourites. Look for AI packs by Jazzycat around the internet if you want some nice looking AI traffic.

Take your truck to Scania’s test track in Södertälje to test its speed and handling, or just to have some fun. You can also explore Scania’s factory that is located right next to the test track.

This could be an advert for the Special Transport DLC, but we already all know its awesome. Not only does it provide oversized loads, it completely overhauls the game mechanics and adds pilot vehicles.

21. Design your own paintjob

If you want to learn how to make your own paintjob, watch this video from Carsmaniac.

Feedback and discussion is highly encouraged.

This list is designed to be definitive but in reality, nothing ever is. This list is mostly based on personal views, however, you should attempt to change my views. I’ll be as flexible as I can, and I can add new content into this guide, within reason. Your opinion and new ideas will help to guide this list in attempt to keep it fresh.

Last but not least even if this list is meant to be definitive, I still urge you to find new methods to enjoy Euro Truck Simulator 2. Report back, it’d be interesting to see how the game keeps you entertained and engaged.