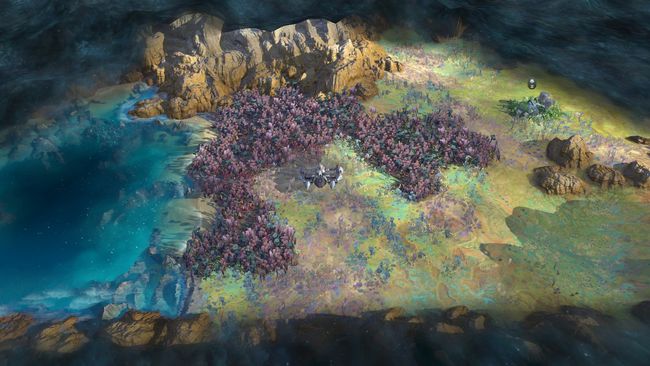 After all the discussion concerning the intricacies of PvP and PvE diplomacy, it might be good to know there is a monster faction that is ALWAYS hostile which you can kill without any grievances or consequences.

These unaffiliated monsters and brigands are called “Marauders” and will put pressure on the player throughout the game. Their mechanics have evolved since AoW3 and of course Planetfall has a new set of monsters.

Marauder spawners are sector dominant structures. This means you need to clear these sites before you can exploit a sector. The planet surface is populated with spawners at the start of the map but new spawners to appear, through NPC quests and player operations. Spawner Combat maps vary per creature type and may include environmental hazards.

Here are some of the units that have been specifically designed to be marauder units and as guardians of landmarks or as Quest Targets. Note that as in you might see brigands from other faction s appear as marauders too; often in mixed stacks.

These enormous alien grasshoppers are a common plague on many Star Union planets. They are the scourge of fledging colonies.

These insects are known for their corrosive acid attacks and their death rattles, which cover everyone adjacent to these in a thick corrosive substance.

Silicon based wildlife, the Quartzite are born of volcanoes and deep caves. Their physiology allows them spew flaming lava or electrocute all those who approach them. They are a match for any armored divion. Some say they are created by terraforming activities.

The Octowhales are scourge of the oceans. Their songs guide not only themselves but other creatures as well. The Chelus follow them into combat, knowing that the boats that threaten their waters can be used as food for their young.

These Androids used to be employed in the darker crevasses of the entertainment industry. After being set free, unspeakable memories haunted their synthetic minds. Many slipped into a life of violent crime.

There’s many more. Marauders, NPCs Factions, Hazard locationsl – you’ll be surprised how dangerous the worlds are in Planetfall.