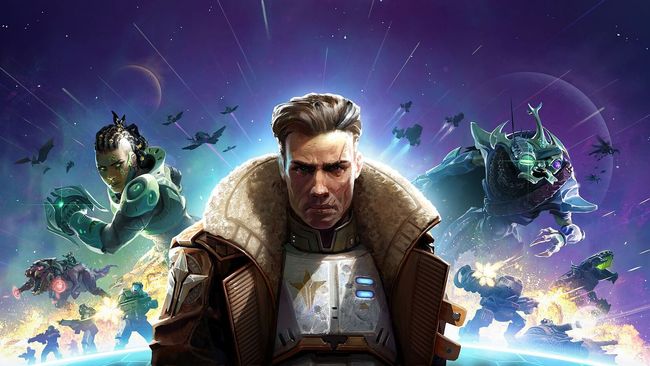 Just like in Age of Wonders 3, combat is a very important part of playing Planetfall and one of the biggest challenges we had was keeping the feel of AoW3 combat whilst developing a system that is more focused on ranged combat than melee combat.

One of the first things we decided was that we needed to bring hit chances back into the game, having ranged weapons always hit makes combat feel stale and predictable, while the chance of an attack failing adds a level of excitement and tension. It also allowed us to add more gameplay to the combat environments, long range attacks would have their accuracy reduced, as would attacks on units behind cover. The terrain now has different height levels, and shooting at a unit that’s lower than oneself grants a bonus to accuracy. Units can also deploy smoke screens to protect their units in areas without cover.

One issue is that many people really, really dislike missing attacks. To help fix this every attack has a chance to Graze a target instead of missing it. Grazing shots do half damage, and any special effects attached to the attack are either weakened or disabled entirely. The chance of a graze happening is up to 25% of the chance to miss, so:

This gives the player more of a sense of control, since if a shot is good enough it’s guaranteed to do something, only the most reckless and ill-advised attacks have a high chance of achieving nothing at all.

Overwatch was another feature that we decided early on to add. Units in overwatch guard an arc of hexes in front of them, and the first enemy unit to act or move in one of those hexes will get shot at. Melee units get a special type of multidirectional overwatch which they enter even if they attacked during their turn, giving them a free attack against any unit who tries to move past them or shoot them at point blank range.

In order to counter overwatch, we added the Impact system. High Impact attacks, such as explosives and melee attacks, can Stagger the units they hit, knocking them out of overwatch and allowing your own units to act safely. Staggering will also knock units out of guard mode, and reduce their action points, limiting their options in their next turn. Stagger a unit enough times, and it will not be able to act at all!

Will some races (such as space dwarves) be able to drop turrets and deploy them during battle?

The Vanguard specialize in drones and autonomous robots, their engineer unit can deploy a turret while their T4 specializes in launching various types of drones in combat to provide defensive and offensive support.

Will there be the possibility to burn battlefields down, effectively creating fire barriers?

The Promethean specialize in weapons that leave areas of the battlefield on fire, providing area denial abilities. They can also mod their units to be immune to this fire, or even gain buffs from it, allowing them to reshape the battlefield to their advantage.

Are there any insta-death abilities, like disintegrate in AoW3?

There are indeed! For example, the Plasma Disintegrator Module is an end game mod for laser weaponry, allowing attacks to strip armor and giving a chance to insta-kill tier 1 and 2 units.

What formula will be used to calculate damage?

AoW3’s damage formulas use flat damage reduction, which does not cope well with the wide range of damage values we need for this game, so we’re using a formula that reduces damage proportionally.

The formula also has diminishing returns; the first few points of resistance reduce damage by roughly 10% each, but as more is stacked, this decreases rapidly. The difference between 10 and 11 resistance is only 4%.