Despite the fact that it’s a side quest, you should complete it if you want to facilitate the process of conquering Megaris for the Spartan army. This quest is so important because killing fighters of the dominant nation is one of the main ways of destabilizing the situation in the selected region.

Chances are that you will complete this quest without paying much attention to it. All that you must do is kill 20 Athenian soldiers (captains and polemarches have the most influence on the stability of the region). They can be found in numerous camps and fortresses of Megaris.

Start your crusade against Athenians by dealing with Fort Geraneia. This is a big fort on the northern slope of Mount Geraneia, west of the captured Tripodiskos, where you will also have to complete two additional orders from Stentor.

Due to the abundance of enemies in this location, we recommend approaching the neutralization of enemy forces with caution. Do not be overly aggressive – half the fort will rush to the noise.

Decide for yourself how you want to start the stealth storming of the fort, but we advise you to start with eliminating a captain and a polemarch. They are the most dangerous enemies in the fort and you certainly don’t want to see any of them helping their colleagues in a fight. 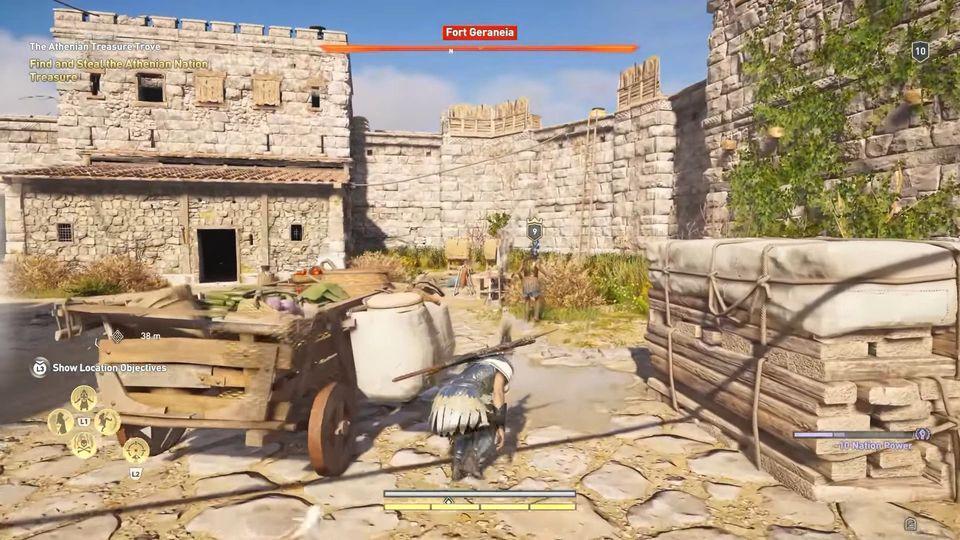 The captain guards the entrance to the fort. Theoretically, he can be lured out of the fort, but even if your sudden attack does not kill this elite enemy with one blow, no one should hear the noise of the battle unless you come too close to other guards. 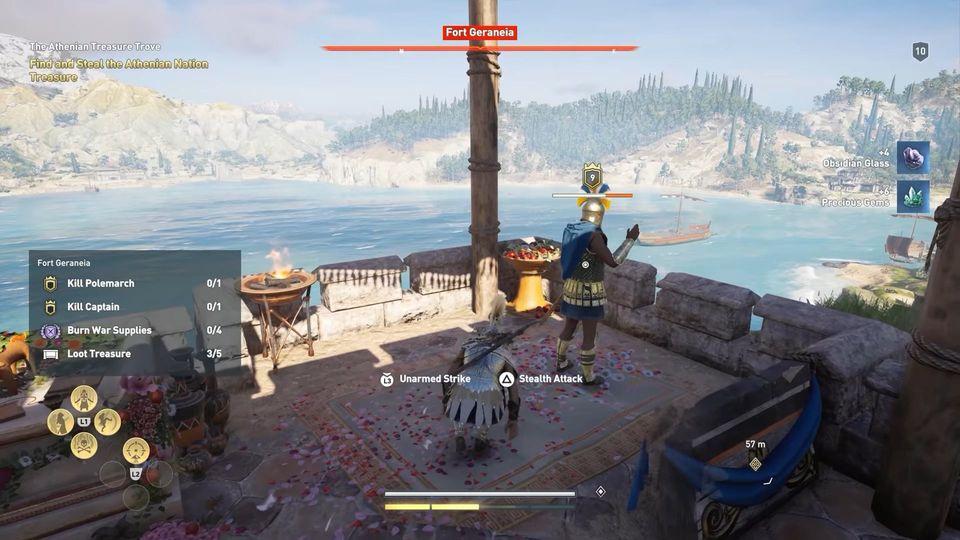 The polemarch is chilling out in the balcony on the north side of the region. It will be a bit harder to deal with him. First, he is located closer to his subordinates than the captain, so it is a good idea to clear the zone of the upcoming battle from Athenian soldiers.

Second, polemarch is much stronger and has more endurance compared to other guards, so the battle with him requires plenty of time. In this light, do not forget to buy the ability Second Wind, which restores at least 35% of maximum health when used.

Try to strike first by sneaking up from behind or use your bow to make a powerful shot – the skill Devastating Shot together with some exotic arrow will come in handy. After this, dodge and parry, parry, parry… (just press the appropriate button if you are not sure of timing).

Other guards won’t bring significant problems: use natural shelters (grass, bushes), whistle and use stealth abilities, like Shadow Assassin and Rush Assassination. The first one increases damage from stealth hits while the second one allows to chain them.

When there are no enemies in Fort Geraneia, complete the next two quests given by Stentor and then proceed to the next area populated by Athenian soldiers. For killing a sufficient number of fighters, you will get about 2000 experience points.