ATOM RPG – How to defeat the bandits in prologue

Simple guide on how to win against the group of bandits in prologue and keep your AK-47 at the start of the game. 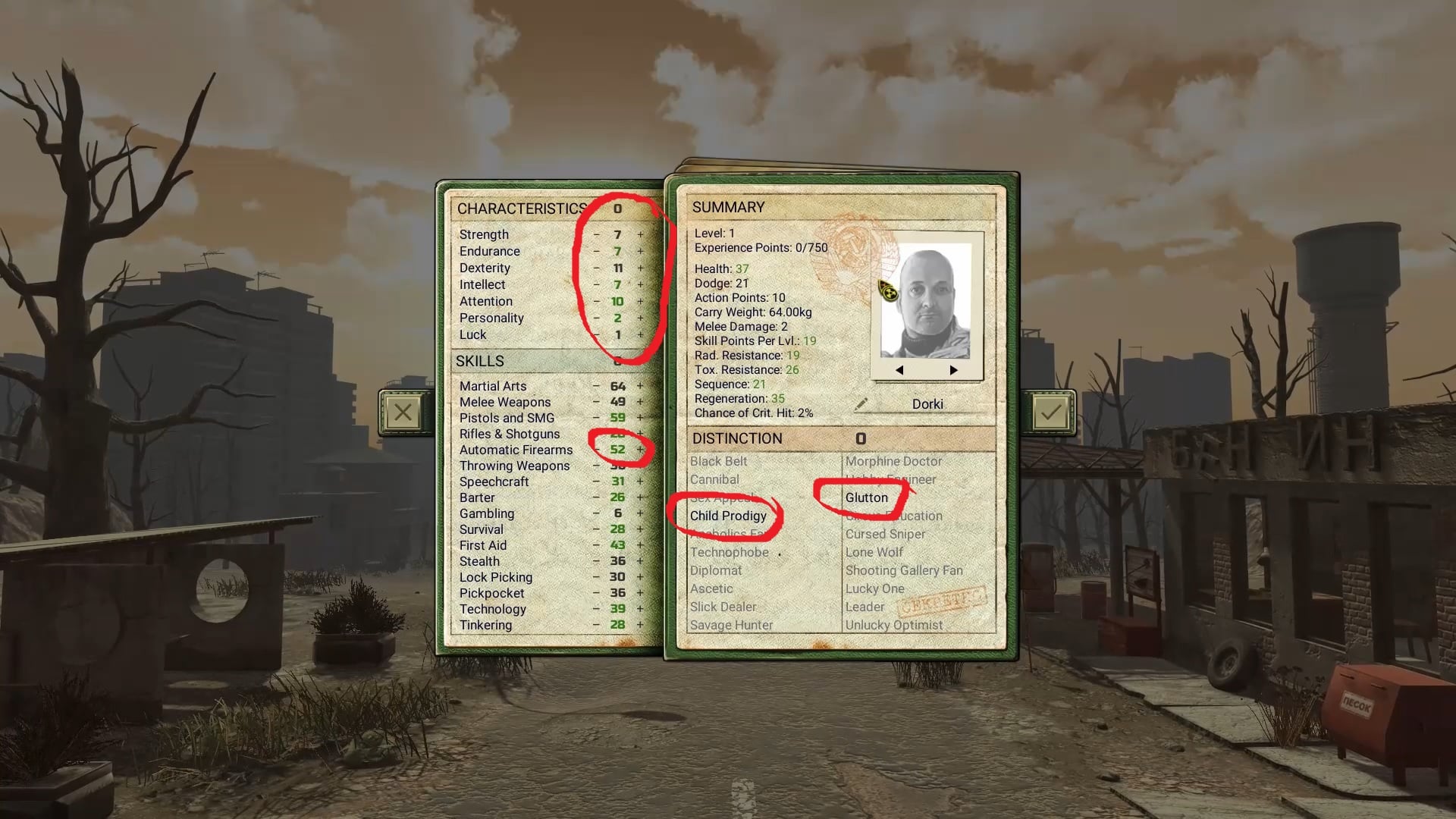 Why: to get enough characteristics points. However, you can pick something else as long as it allows you to put 10 points into attention and 10-11 points into dexterity. Although, at least somewhat decent endurance and strength is advised as well.

Strength and endurance give you more HP which makes it easier to survive the 3 hits from the bandits that you cannot avoid. Although, you have the opportunity to heal before the 3rd hit. Regardless, these attributes are usefull throughout the rest of the game too. Of course, you can move some points into other attributes if you wish so.

Dexterity gives you action points. This is a must at 10, having less action points than that makes the first fight impossible to win. The reason I have it set to 11 is that I kept getting knocked out fairly often with dexterity at 10. It took many attempts before I managed to get through the fight without getting knocked out. However, I ran through the whole fight 9 or 10 times with only one knockout with dexterity set to 11.

Intellect is important for skill/attribute checks later in game and so that you have decent skill point gain per level. It does not seem to play any role during the prologue fight.

Attention at 10 will let you have 99% accuracy with the AK-47 even when you set it to burst fire, at least in combination with the 50 ish automatic weapons skill. This is also a must, although could be doable at 8 or 9, I think.

Personality and luck could be useful later in game, but I had no points left.

Get your weapon and run away

When you get to choose your response in the conversation with bandit leader, pick strength based answer. This will give you the opportunity to go first when the fight starts. 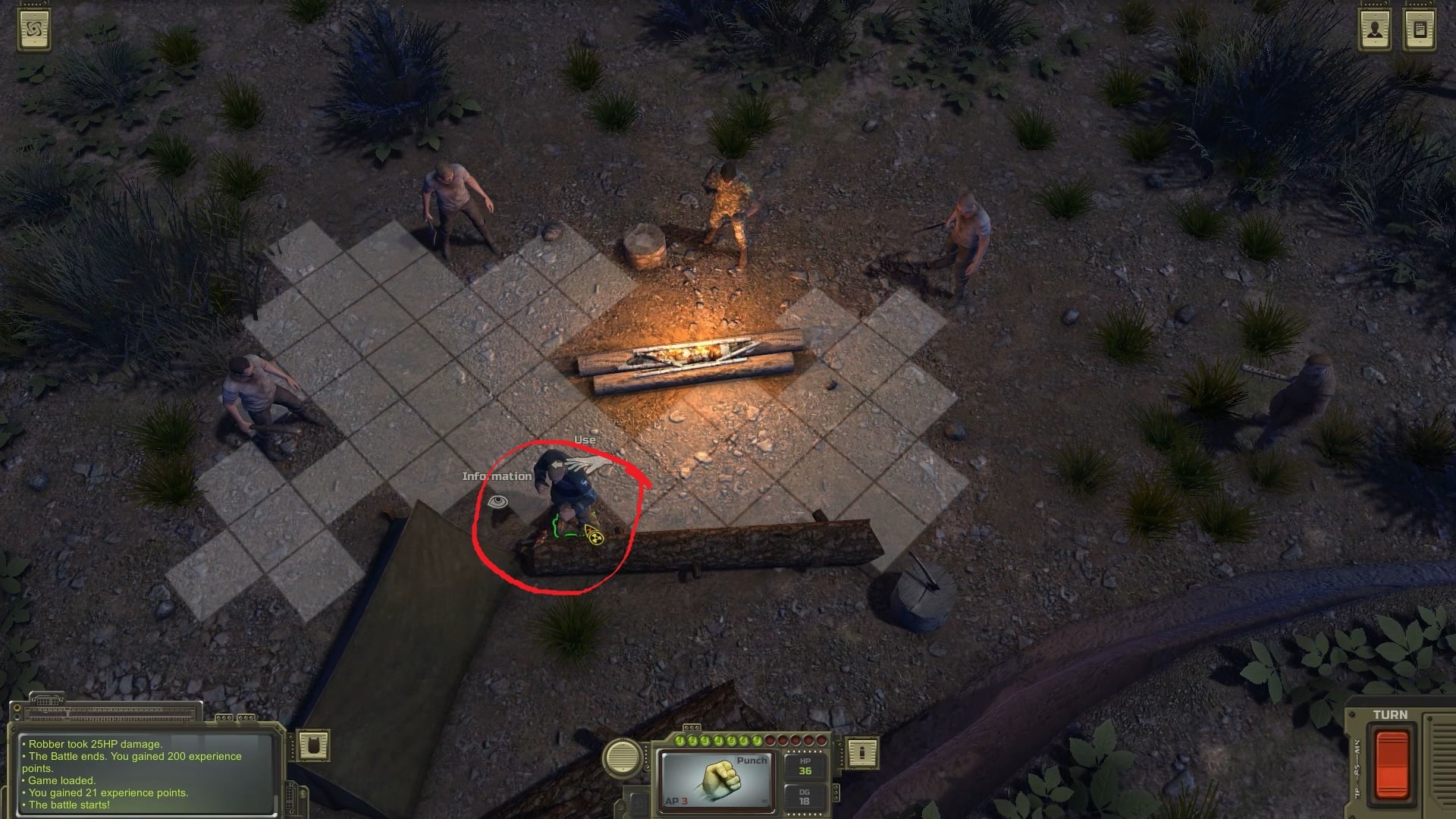 Move to the tile with the backpack on it. Loot the backpack for all it’s contents and pick up the AK-47. You will have 3 action points left. Ignore that fact and end your turn. You will only have to tank one hit from the bandit leader here. Other bandits won’t have enough action points left to attack on this turn. Also, if you stand on any other tile, you might find yourself completely surrounded by bandits with no escape route available. 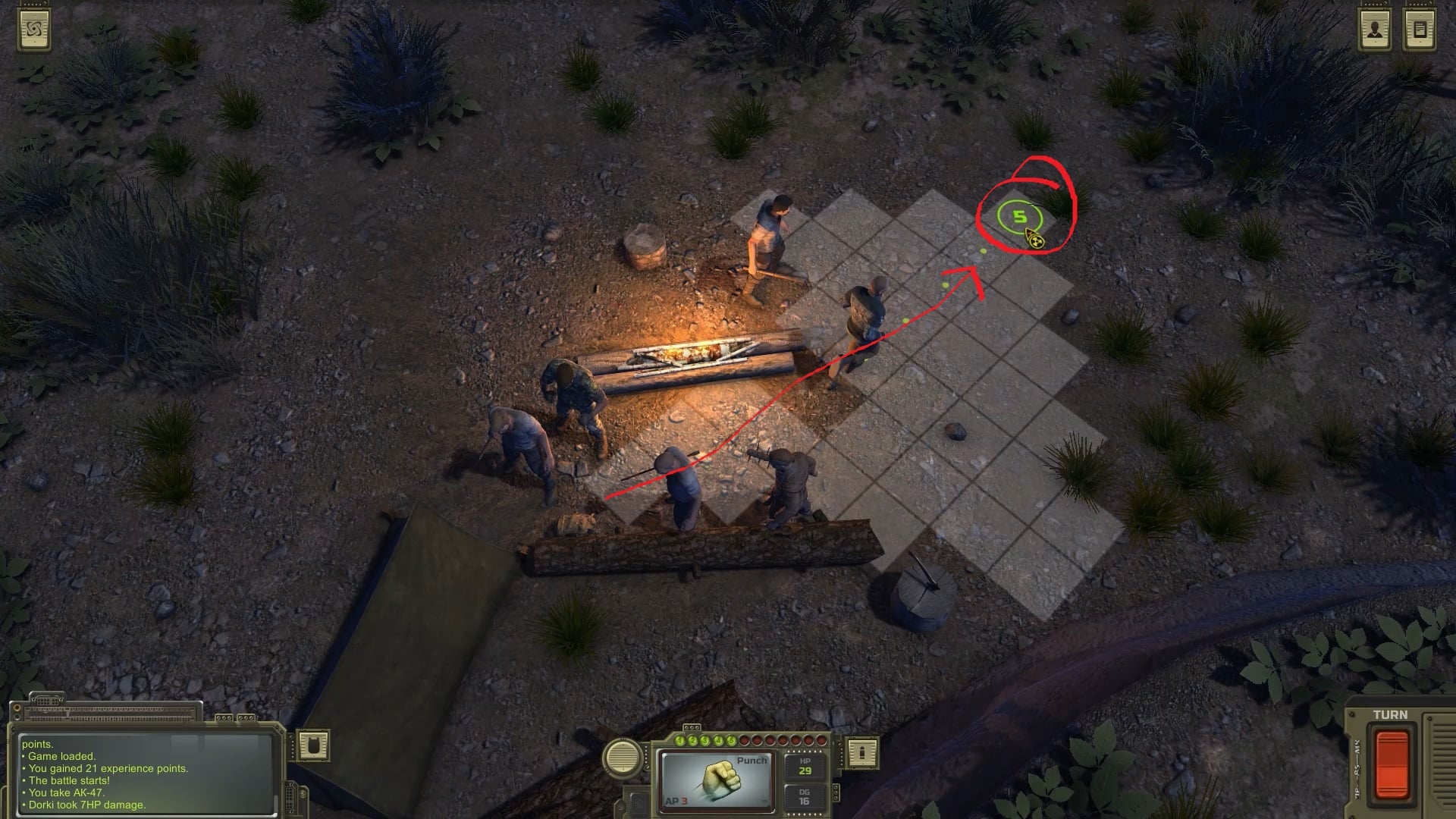 Run over to the highlighted tile. This is the spot where you have to survive the second hit that you cannot avoid. This time from a bandit holding spiked club. Afterwards, keep running away as seen in the screenshots bellow. 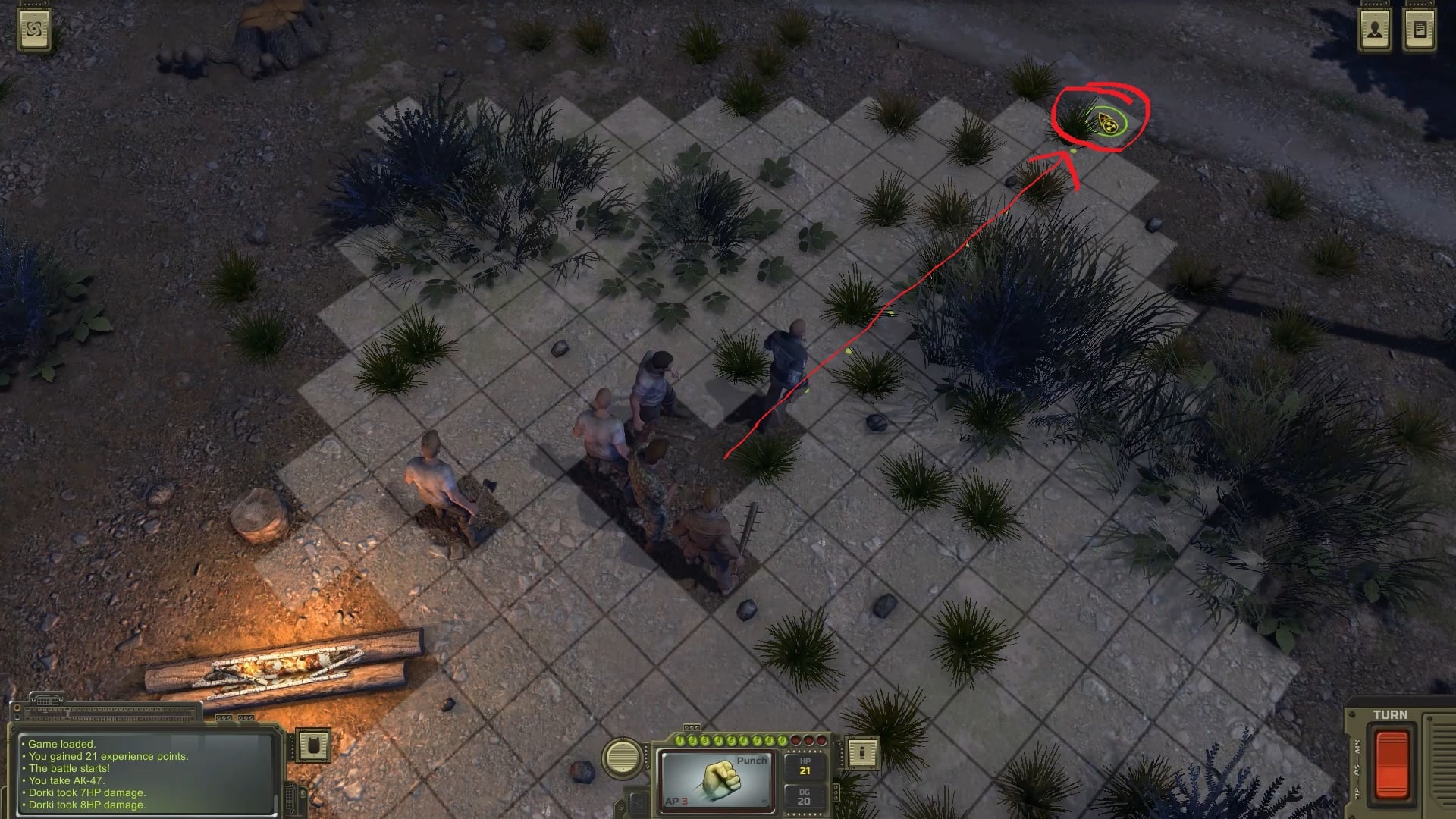 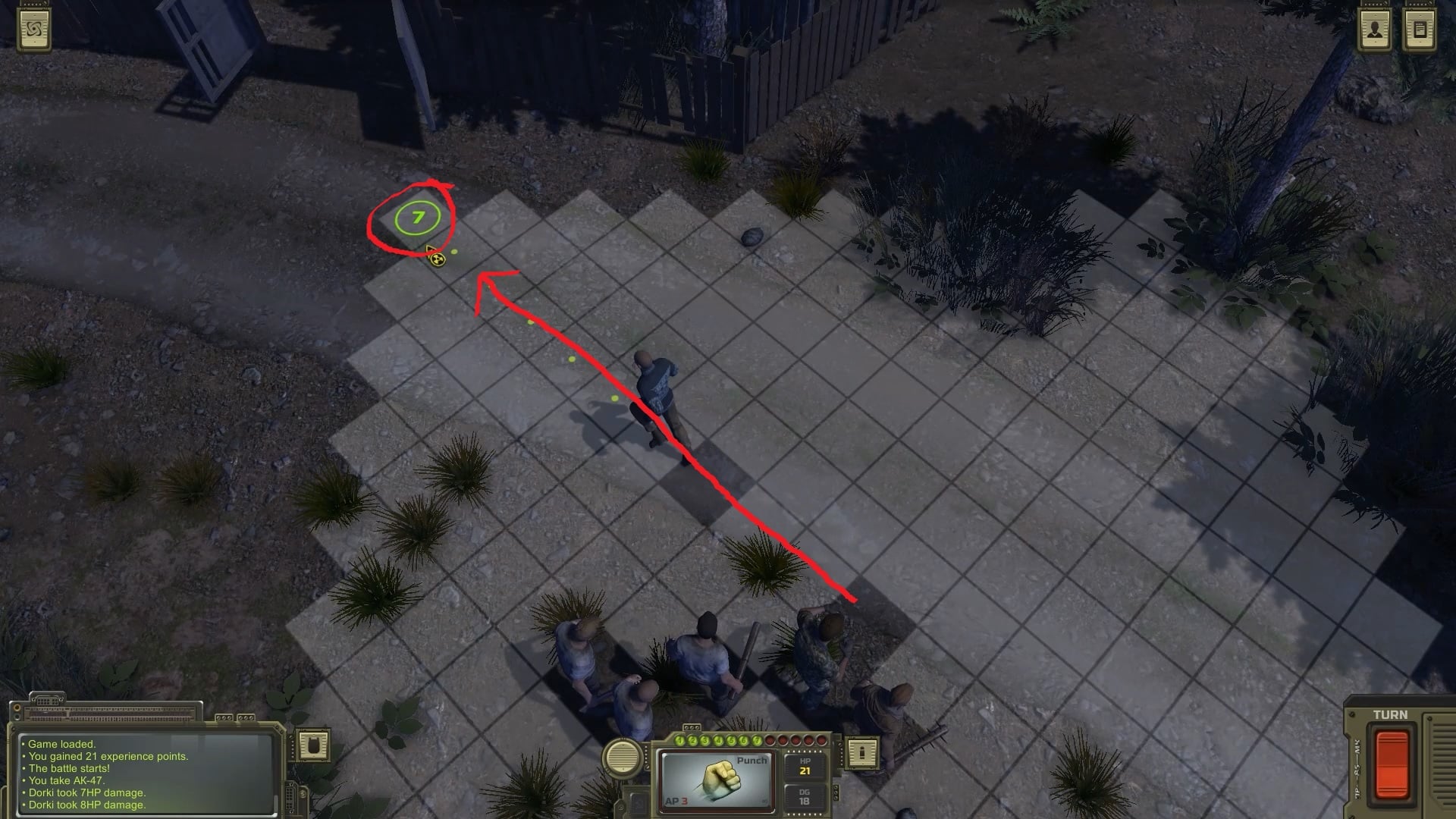 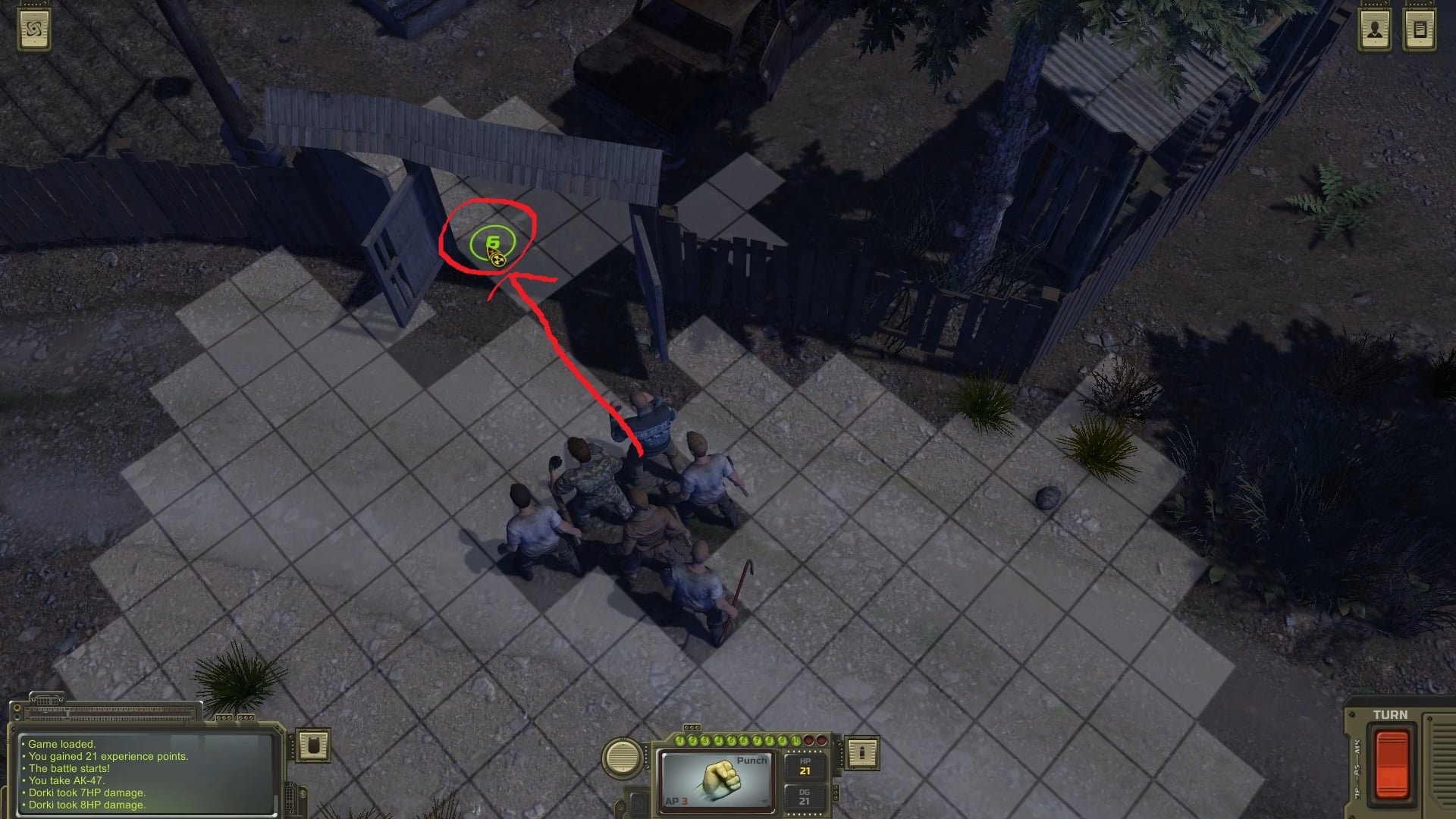 Move onto the highlighted tile behind the wooden gate. This is the place where you will make you stand. You have 4 action points left after moving over there. Make sure you have fists selected as your weapon. Then open up your inventory. This will consume your remaining 4 action points and your turns will end as soon as you close your inventory. 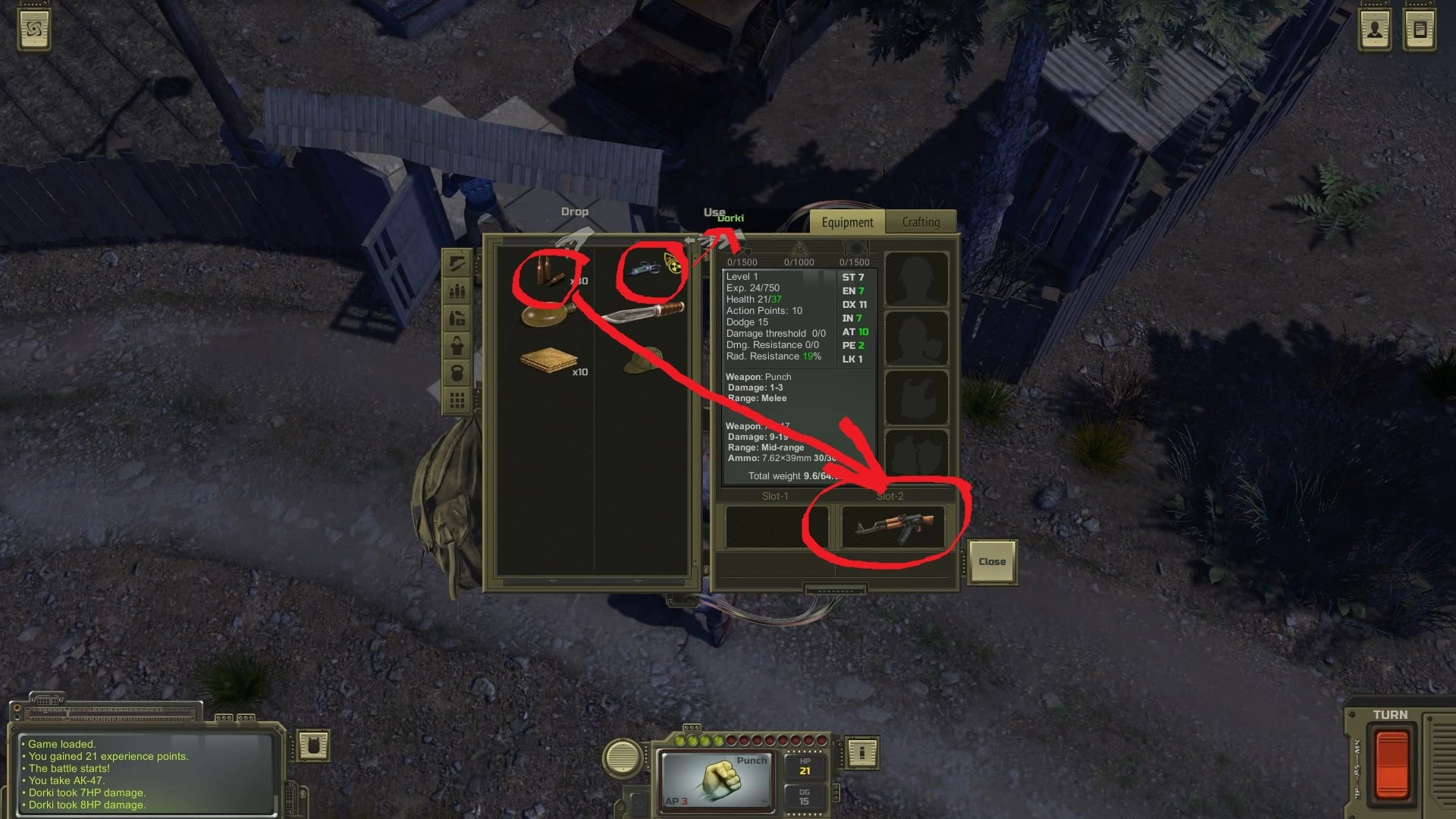 Drag the AK-47 into equipment slot number 2. This is very important, because if you equip the rifle in the slot you have currently selected as your weapon (should be slot 1-fists atm), the bandit leader will disarm you as soon as he hits you after you closed the inventory. That would likely be a game over for you at this point.

Do not forget to drag the bullets onto your AK-47 to load it while in inventory screen as well. You can also heal yourself at this point, if you took too much damage from the first 2 hits you received. Keep in mind you will have to tank one more hit from the bandit leader after you close the inventory screen. It is also possible that you will be unable to kill all bandits in the first shot which means potentially even more hits you have to survive.

Anyway, you can heal yourself in the inventory screen by left-clicking on the stimpack/injection looking item and choosing use. 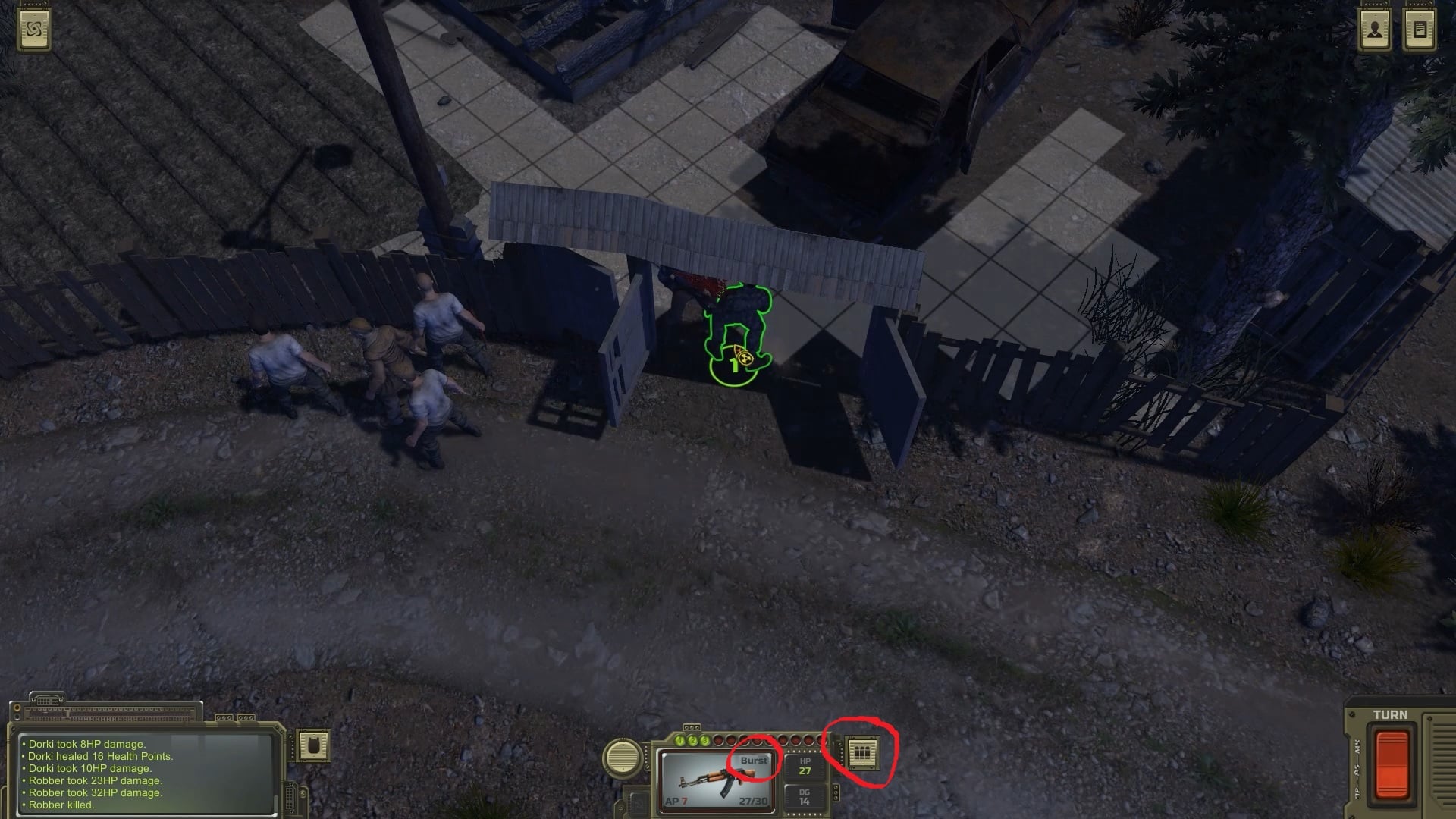 The bandit leader took his turn, his fellow ♥♥♥♥♥♥♥s ran off trying to circumnavigate the wooden fence. It is time to turn the tables on your attackers. Switch the weapon from fists to AK-47 and change the firing mode to burst. It seems you are more likely to kill the bandits in one attack in burst fire mode. It consumes 7 action points which leaves you time to switch back to fists afterwards. This is important in case you expect to get hit during the bandits’ turn as they will disarm your weapon every single time they hit you. Beware though, you have to re-set the firing mode every time you switch weapons! It will always change back to single shot after changing a weapon.

Anyway, keep killing the bandits and only move from the tile you are standing on if you have to. 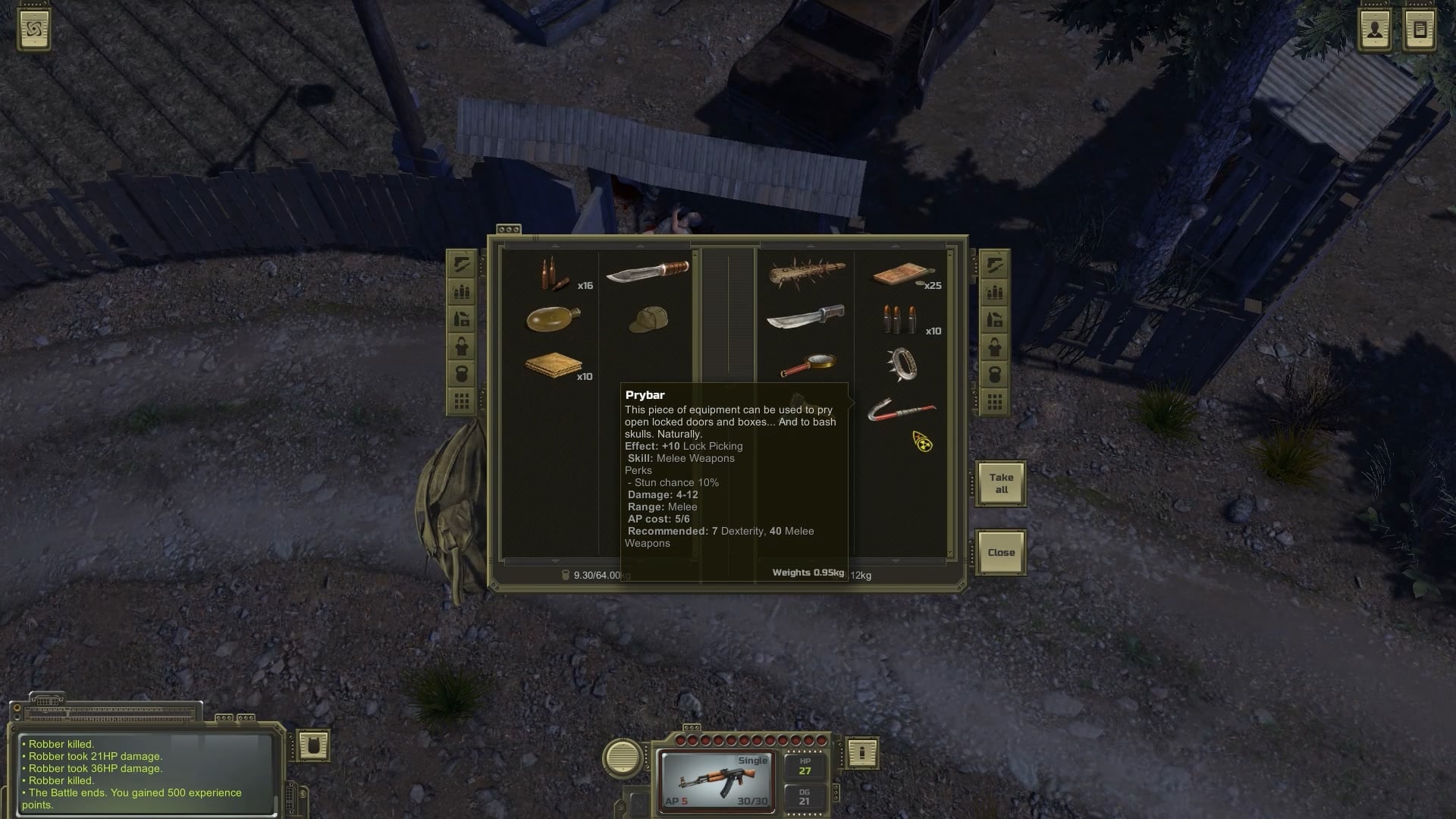 Congratulations, you have won the seemingly impossible fight! All the spoils of battle now belong to you. Loot the bandits and your campsite. There is an axe down there and your tent has some goodies as well. AK-47 and the Soviet army knife make your character rather OP in the early game.