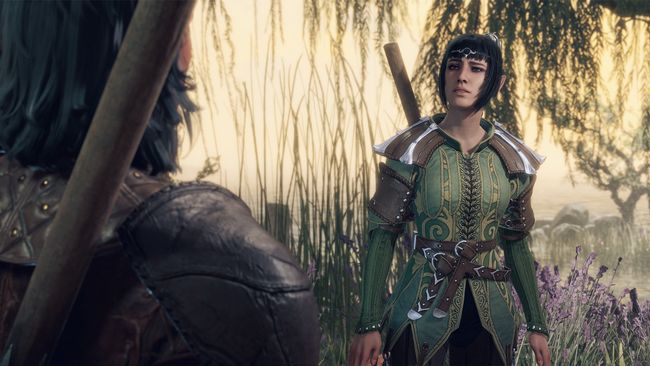 The spider is located right outside of the Blighted Village waypoint at the bottom of the well.

The single best piece of advice for the fight ahead is to save, and save often.

There’s one fight encounter before you are able to venture further into the caves where the spider matriarch is. Now, there are several factors which can help you in this fight.

First, obtaining an invisibility potion and stalking around destroying the egg clutches scattered across the area will prevent her from spawning her spider children which would then be unable to gnaw off your face.

If you don’t prevent these demon spider babies from coming alive then the fight becomes much more challenging in managing the many mobs but thankfully they can be easily dealt with by pushing them off the ledge after an attack (if you’re party doesn’t managed to get overwhelmed before that happening).

The spiders launch an AOE poison ranged attack which can be devastating to your adventures when they’re all grouped together much like a teenage influencer throwing a party during covid.

The other factor in this fight which makes it difficult is the spider’s ability to phase teleport to you, quickly closing the gap and debuffing your ranged adventurers due to their close proximity.

However, despite those disadvantages we do have a powerful tool in this fight. The spiders especially the matriarch likes to situate herself on top of the web bridges. Destroying these bridges with any 4+ damage attack will destroy them and deal a hefty amount of fall damage. One bridge in particular can be destroyed and the spider will fall down a chasm, losing the ability to loot her but winning the fight for you team.

Once defeated the boss drops the Poisoner’s Robe which grants Poison Trails, when the wearer casts a spell that deals poison damage it deals an additional 1d4 poison.

It’s end. I hope “Baldur’s Gate 3 Spider Matriarch Boss Guide” helps you. Feel free to contribute the topic. If you have also comments or suggestions, comment us.