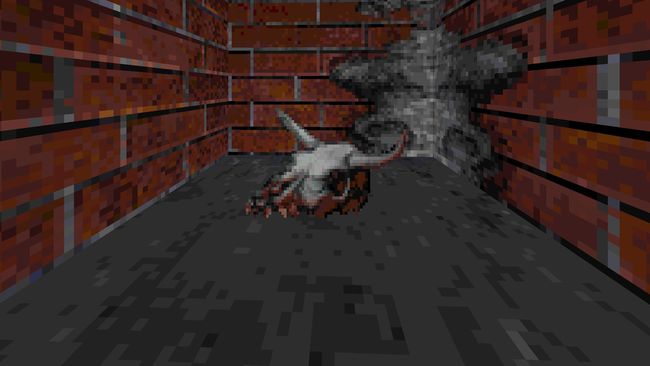 Battle an army of sycophantic cultists, zombies, gargoyles, hellhounds, and an insatiable host of horrors in your quest to defeat the evil Tchernobog. Squirm through 42 loathesome levels filled with more atmosphere than a Lovecraftian mausoleum.

How to get every achievement.

Beneath the Floor boards
Super secrets can be tough to find but one easy one is right before taking the exit to e1m1 jump back up to the ledge you came from and start jumping towards the wall in front of you a bit to the left is a fake wall with a Napalm launcher.

Priest, Beast, Deceased
Just beat the Post Mortem Expansion pack.
Side note to make things easier for yourself play this one on Lightly broiled-Extra crispy so you can get the Chosen-in-Regress achievement at the end of the episode.

Swallow this
To kill a choking hand i’d recommend shooting or blowing one up or you could try burning one. Side note if your wondering how to get them off your neck when they try to strangle you spam the use key which should be set to E by default.

I Die… Again
Okay I got 2 efficient ways to get this one.
1. get some TNT quick save light the TNT and never let go and repeat.
2. on the train level of Episode 1 there is a super secret that requires you to jump outside of the train you’ll probably kill yourself alot trying to find this one jump from the hole you blow up from the passenger cars towards the back of the train and try to land in front of a sign that says Phantom.

Watch out for pedestrians
Load e3m1 on Made to order and turn the monsters off.

Digestive irritant
E1M4
At the destroyed bridge where you jump in the water to get to the exit, look at the other side. Use the Napalm Launcher to blow open the crack, and jump from pillar to pillar until you get to the other side. Follow along the passage until you get to the stone pole with 3 buttons. The combination is Dagger, Eye, Moon–this will take you to the secret level. Contains: Life Seed, Super Armor.
Fun fact the combination is the same as the order in which you get the keys in this level.

Should have gone to the beach
E2M4
After you collect all 5 tomes, you can access the secret level from the magic circle in Moon key room.

Better left Buried
E3M4
At the chapel, there’s a button near the ceiling. It opens a way near the place where the ghosts came from. You’ll see the button clearly when you go to the altar and look back and up. Shoot it.

Shopping Spree!
E4M4
When you reach the exit, make your way through the spiders and blow up the secret wall located on the right. Contains: Exit to Secret Level.

The Legend…
The secret exit for Cryptic Passage is on Level 6 Graveyard
Near the end of the level before you climb up the stairs to push the switch that raises the staircase, turn around and jump into the fire. Follow the path. Contains: Exit to the Secret Level.

So forgotten that they’re still full of cultist
E6M6
Shoot the eye above Moon key door, and the entrance to the secret level opens up to your right.

Oh my god… You’re rabid!?
Get a Hell hound to follow you into some water they drown instantly
Fun fact this also works on gargoyles but it can be tricky to lead them to water and speaking of water if you trick a Gill man or a piranha to swim into a wall they bonk their heads and die instantly.

I’m not staying in this freaking house another second
Just follow this video and be sure to save before going to this level e2m5 so save your game at the end of e2m4 or e2m9.

Chosen-in-regress
Just follow this video and save at the end of the previous level e6m7.

I’d just like to thank the lovely chaps who put up video guides for the achievements that are easier to understand with visual aid. And December Man for putting up some lovely guides for finding all the secrets for the original version of Blood on steam.