Bloodstained Ritual of the Night: List of All Techniques (Weapons Unlock)

Bloodstained: Ritual of the Night is an exploration-focused, side-scroller action RPG by Koji Igarashi. Play as Miriam, an orphan scarred by an alchemist’s curse that slowly crystallizes her body. Battle through a demon-infested castle and defeat its master to save yourself, and all of humanity!

Other Bloodstained Ritual of the Night Guides:

Bloodstained Ritual of the Night List of All Techniques

List with all techniques, and which weapons unlock them. 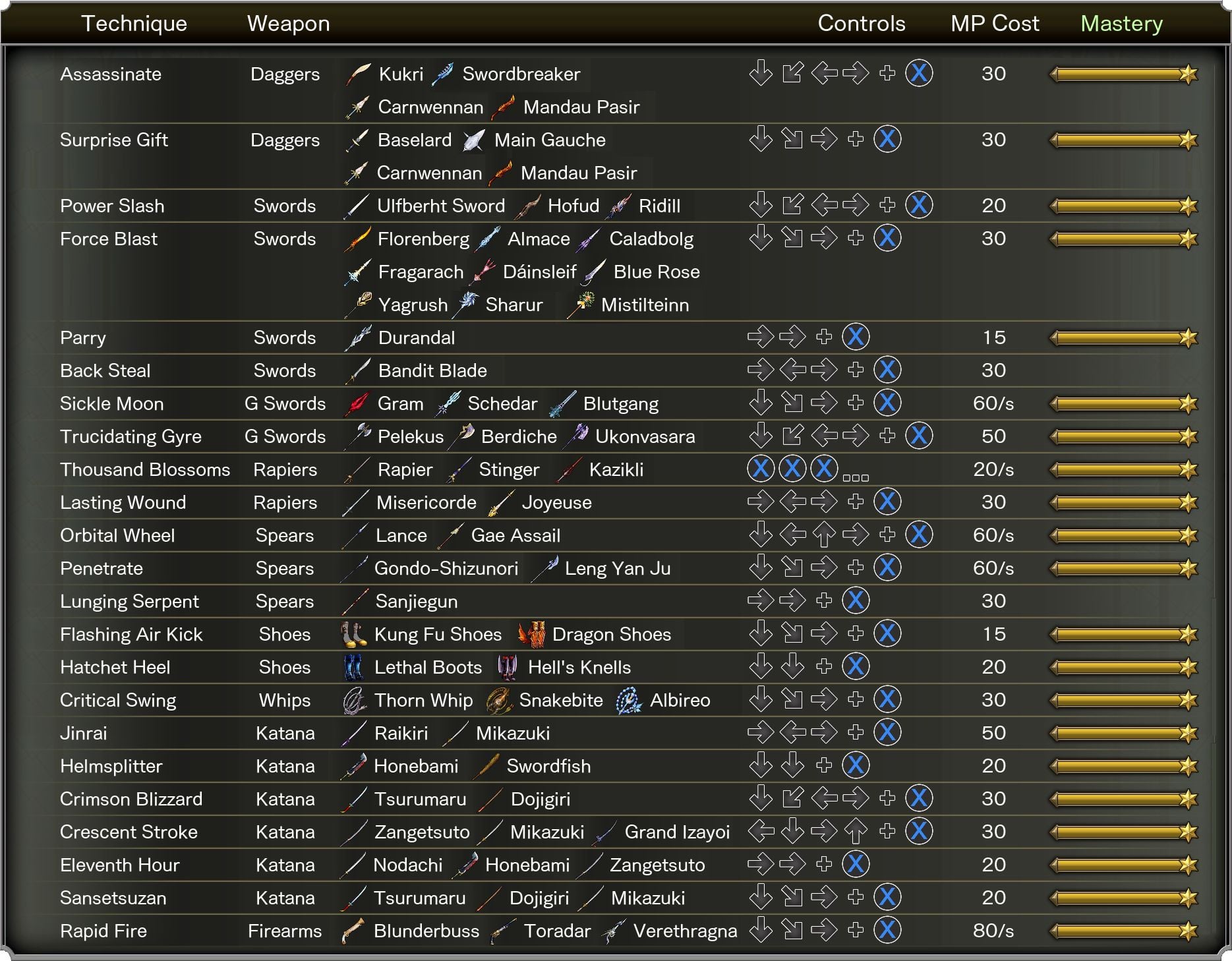 As you start playing, techniques are only usable when you are wielding specific weapons. But even then, you need to discover their base commands before they appear on the list. Fortunately, there are various diaries around the game that will tell you those commands, and which weapons carry those techniques. Most of them appear long after you have those weapons available.

As you execute the technique on enemies, you start to “learn” them, and once they are mastered, you gain that technique as a permanent move to all weapons from the same category.

It do not matter the level of the enemy you are hitting, nor the damage dealt by the technique. The only requirement is that you successful hit someone with them. So, repeating the maneuver in a safe zone will not give you any progress towards mastery, but nothing prevent you to going back into the galleon to fight easy enemies until you master them. Anyway, it’s your call how you prefer to master the techniques.

There are two exceptions to this rule, which are techniques that are linked to a specific weapon and don’t have a mastery bar on the archives. I’ll point them out below. Those two techniques can’t be permanently learned, and can only be used when you are wielding the respective weapon that carry them.

You vanish from your position, appear behind an enemy at your front, deal a backstab attack (with increased damage), and teleport back to your initial position.

You throw your dagger at the enemy. It deals the same damage as your standard attack, and pierce through all the enemies in line. Be aware that the animation is large, but the actual hitbox is as small as a standard bullet.

This attack can be performed in the air.

You swing your weapon behind you and do an overhead attack. It can hit enemies behind you while it executes the backswing.

You do a little hop, and unleash elemental energy from your weapon. Once mastered, it still executes the same move even if your weapon don’t have elemental atributes, but it will be only the slash. You can’t shoot lightning from a normal weapon.

Command: ↓ ↘ → + Attack
MP Cost: 30
Learned first from Red Umbrella (although you can get an elemental weapon before that, if you go deep into crafting early)

You make a brief defensive stance, and if any enemy hit you with a physical attack while the stance is active, you’ll stop time and deliver a counter-attack that might even hit other enemies in the area.

This skill can’t be permanently learned. You must be wielding the Bandit Blade to execute this maneuver. When you do it the first time, however, it will stay listed in your technique list.

As long as you keep the attack button pressed, you’ll start dashing and grinding your sword on the ground. At the release of the button, you’ll slide for a certain distance, while delivering a strong slash to any enemy on its path. The longer you run, stronger the blow will be.

You jump into the air while spinning your weapon, and then land a heavy overhead hit. This attack deal tremendous amounts of damage, but it can be interrupted easily. Use only in safe situations.

You stand in place and repeatedly attack the enemy while you are mashing the button. Once you stop mashing, you’ll deliver a final lunge attack.

You do a “Zorro” cut in the air, dealing up to three hits in the time of a single slash.

You start spinning your spear around you, dealing damage to any enemy that comes nearby. You keep spinning while you keep the attack button pressed. Once you release it, you’ll spin once more and deal a final blow to all enemies neaby, front and back.

You lunge forward at an incredible speed, dealing damage to everything on your path while you hold the attack button. If you hit an enemy that is not killed by the attack, you’ll bounce back and attack again. This is, by far, the fastest way to travel through the castle.

This skill can’t be permanently learned. You must be wielding the Sanjiegun to execute this maneuver. When you do it the first time, however, it will stay listed in your technique list.

Extend your spear in front of you, to deal a ranged attack to all enemies in a straight line. Sometimes it can hit multiple times with a single command.

Both Shoe attacks can be performed in the air.

You lunge forward and attack with an spinning kick. You can repeat this maneuver up to three times in rapid succession to make a combo. Each hit will deal more damage than the previous one. Before you get means to access certain areas, it can be chained in the air to “fake dash”.

You perform an spinning overhead kick to the target, and then spin on the ground while getting up. It deal a single heavy damage followed by a series of light pokes to all enemies around where you landed.

You create a small whirlwind that deal increased damage to an enemy. Despite the lingering animation, the attack don’t hit more than once, and can’t damage an enemy that move into the space while the animation is happening.

You enter a guard position for a brief period. If during this guard, any enemy hit you with a physical attack, you’ll freeze time and counterattack in a straight line. The counter can hit multiple enemies if they are in line. You can miss the counter on the original attacker if the attack originated from above.

You lunge a bit forward and slash the enemy. You can repeat this command up to three times to execute a combo attack. Each successive attack deal more damage than the previous one.

You concentrate energy on your blade, and release it as a magic projectile in front of you. The projectile is slower than a bullet, but have a very large hitbox. Unless the enemy jump over it, you will not miss.

You leap forward and deal an overhead attack on the enemy. The enemy get a debuff on their CON value for some time, making them take extra damage from any physical source (ie, no spells).

You freeze time, then do a very long dash through the whole enemy line, damaging everyone in the process. You are invincible during the maneuver. Learn to love this maneuver. It will save you many time from being cornered by a large mob of enemies.

You do a large circular cut around you. This move deal increased damage, and hit all enemies near you, be it front, back or above.

You stand in place and start shooting repeatedly, with reduced interval between shoots the longer you stay holding the attack button.

It’s end. I hope “Bloodstained Ritual of the Night: List of All Techniques” helps you. Feel free to contribute the topic. If you have also comments or suggestions, comment us.