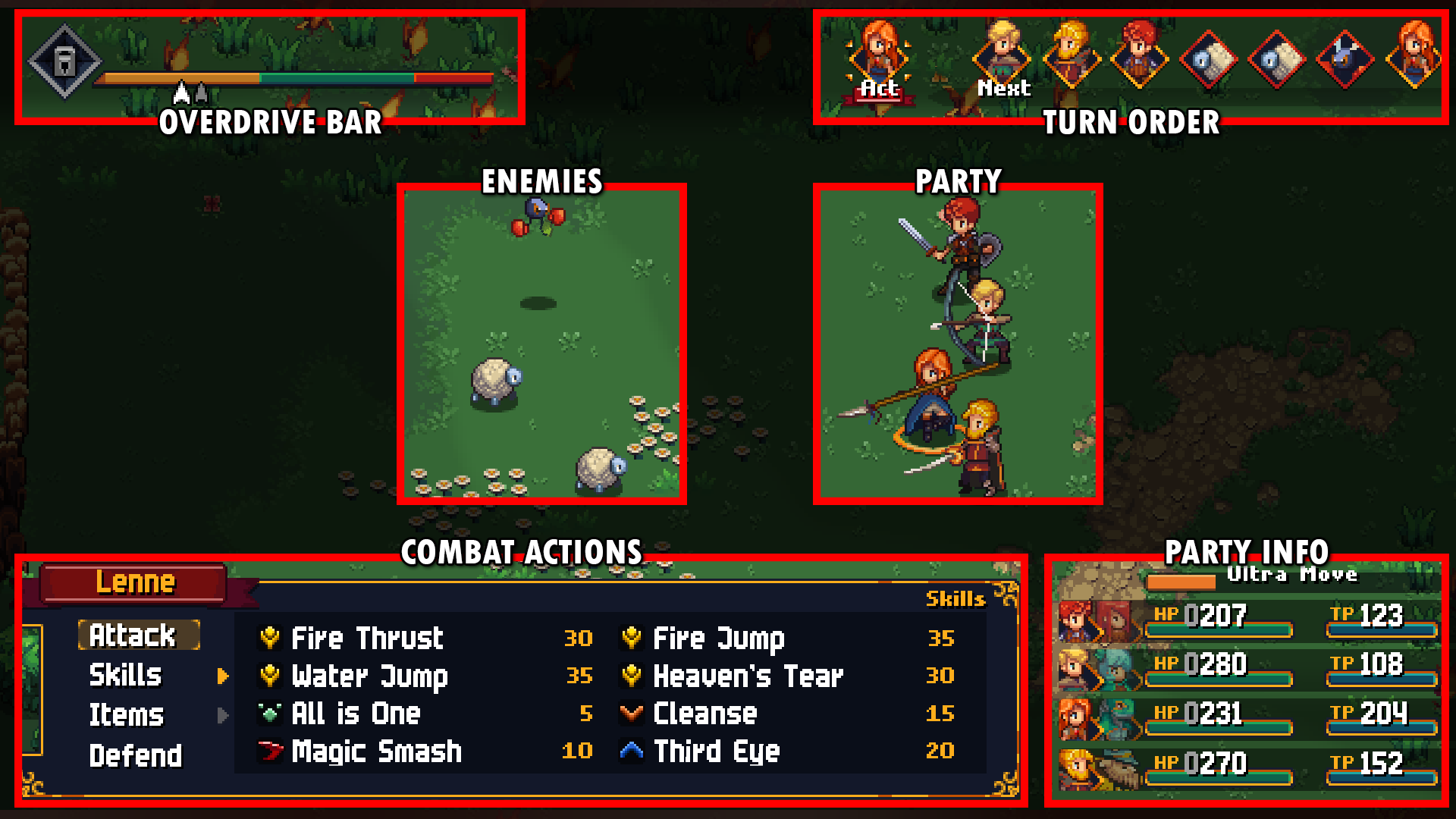 Makes the selected party member do a regular attack against a single enemy. Restores 10 TP.

Makes the selected party member execute a skill they learned and set in the main menu.
Using skills costs TP. The cost amount per skill is displayed right next to the skill type and name in yellow.

Makes the selected party member use / consume an item from the party’s inventory.

Makes the selected party member defend. Reduces incoming physical and magical damage until their next turn by 50%. Applied on top of Overdrive modifiers. Moves the overdrive cursor backwards.

Switches the selected party member with the one in the back row. The switched in member can then use all of their available options except switching out again. Moves the overdrive cursor backwards.

You can only switch members that are in the same row. Which member is in which row is changeable in the main menu under “Formation” and switchable members are indicated with a chain icon between them. In battle, the formation is displayed in the Party Info section on the bottom right of the screen.

To switch, press the button during a party member’s turn. A summary of the member to be switched in shows up. Press the button again to confirm the switch.

Exits the battle and returns the party to the map outside of the enemy’s range. The encounter is reset, which means:

Some battles are not escapable.

All actions except Switch and Escape immediately increase the Ultra Move bar slightly upon use.

The party member who is currently acting is highlighted with a yellow ring around their battle sprite and their name is displayed above the action menu. 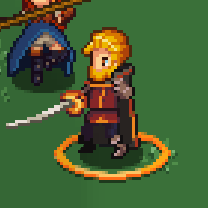 When targeting an enemy during battle after selecting an action, their status containing useful information gets displayed.

A red X indicates that the enemy is not affected by any action influenced or influencing that enemy property.
⠀
Additionally, the currently targeted enemy has their name and HP bar displayed above them.

The Overdrive bar controls the flow of the battle. The bar consists of the title “OVERDRIVE” or “OVERHEAT”, an icon on the left and a bar separated into minimum 3 segments with different colors.
Within that bar, the player moves forward or backwards during the battle, depending on their actions, indicated by a white arrow.

A battle always starts in the Neutral (yellow) zone.

The bar is separated into three segments.
Neutral (yellow)

The player ideally wants to stay in the green Overdrive zone as much as possible.

When a party member or enemy attacks or uses a skill, the player’s cursor on the Overdrive bar moves to the right. Specific actions move the cursor to the left.
⠀

⠀
Before confirming an action, a second smaller arrow will show up on the Overdrive bar previewing the position the cursor will be in when confirming it.

Actions that move the cursor forward

Actions that move the cursor backwards

⠀
When entering Overdrive or Overheat, an indicator will show on the center of the screen with a sound informing the player.
⠀

⠀
⠀
Once leaving the Neutral zone, the icon left to the Overdrive bar changes from a grey lock to a display of a skill type with a number.
⠀

⠀
During a party member’s turn, any skill matching its skill type with the type displayed in the Overdrive bar will be displayed in yellow.
⠀

⠀
When using a matching skill type, the player’s cursor on the Overdrive bar moves backwards a large amount.
⠀

⠀
⠀
The number on the icon indicates how many player turns this Overdrive skill type icon will be displayed. When reaching 0, the type changes to a random other type.
⠀

⠀
Using a matching skill also immediately changes the icon to a different type, unless the skill used this way moves the player cursor into the Neutral zone. 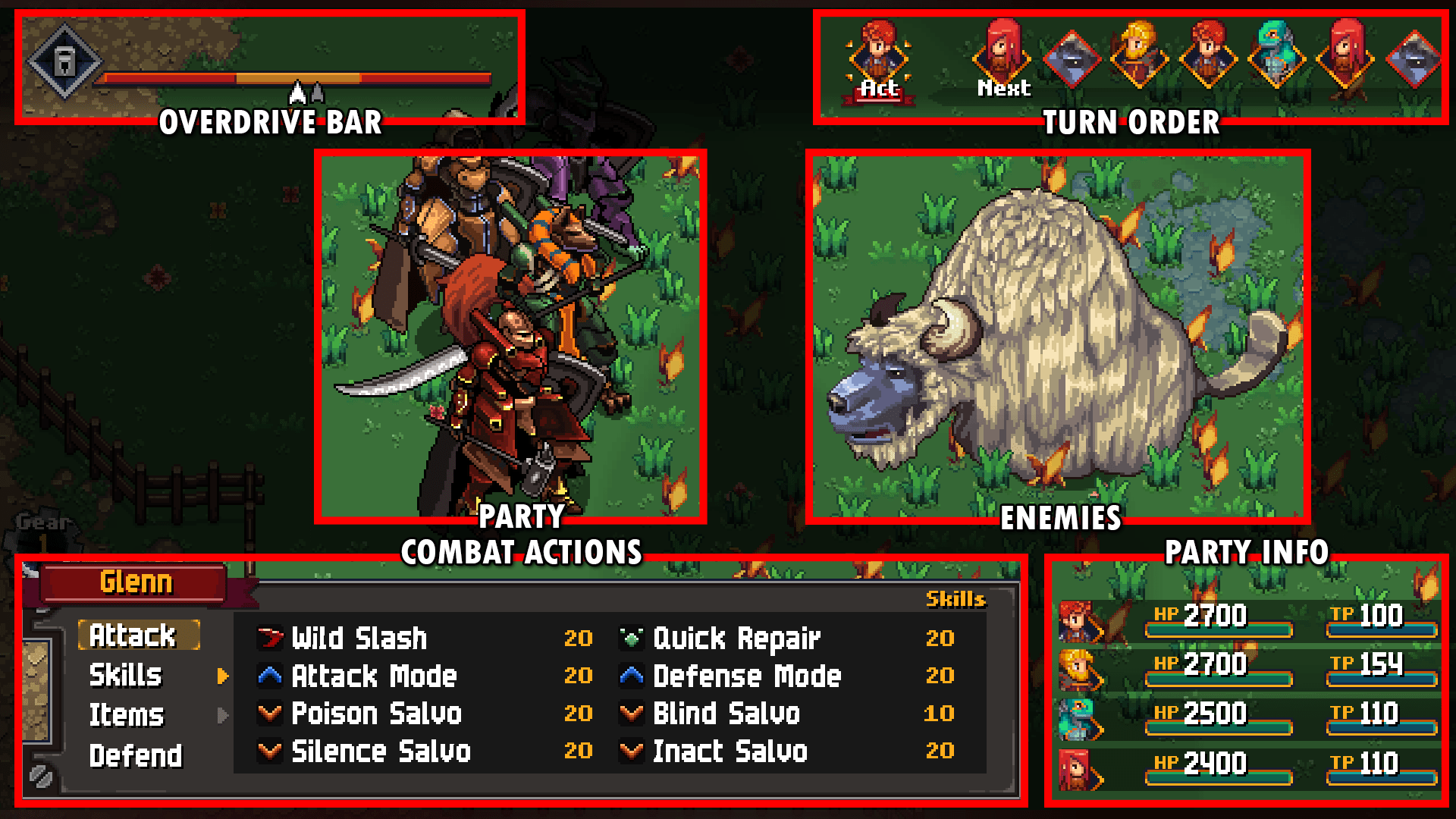 ⠀
Sky Armor battles behave like regular battles, with some differences regarding the Overdrive system.

There is no Overdrive Zone, only Neutral and two Overheat zones to the left and right end.
The player starts in the middle of the Neutral Zone. The skill type icon is always locked.

Above the Combat Actions menu there is a spinning cogwheel and a number labeled “Gear”.
The battle always starts with all party members in Gear 1.
⠀
Switching GearOnce per turn, a party member can switch gears.
Switching order is always Gear 1 → Gear 2 → Gear 0 → Gear 1 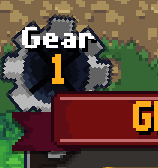 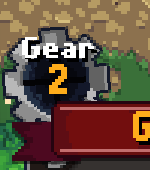