This guide explains how to make good (if not ridiculous piles of) money using the Parklife DLC. Thought others might benefit from this information if they want to be push the boudaries of what Parklife DLC can do for them.

I also found a “bug” in how Park areas count visitors and a solution to this problem.

In order to follow this guide you need the following:

1) a city with sufficient number of cims in order for Park Areas to work. I would suggest a population size of over 14,000 cims. You can do this with a smaller city but it can be more challenging to find busy foot traffic paths. Basically, the more cims, the more effective Park Areas will be.

It is assumed that people who read this guide want to grow their city “naturally” without using the Unlimited Money mod.

How to Make Better Money with a Park Area

Before I knew any better, my Park Areas (that is, custom parks) were breaking even and sometimes making some profit (about ₡100 to ₡1000 per park). 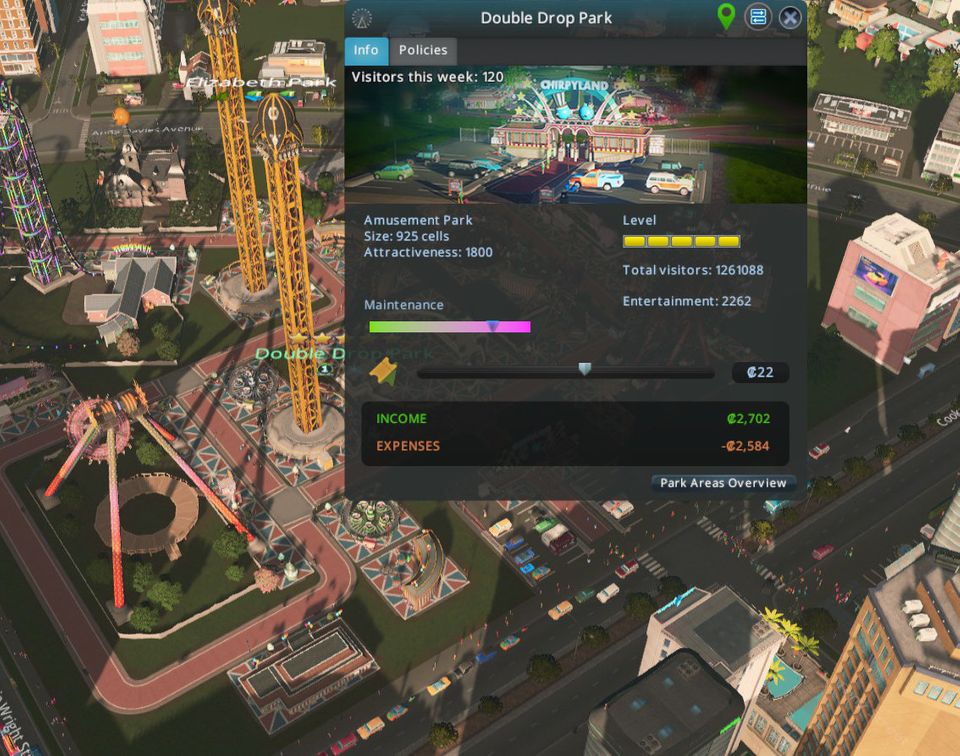 The Amusement park (see above-screenshot) was placed within the city and is barely breaking even. 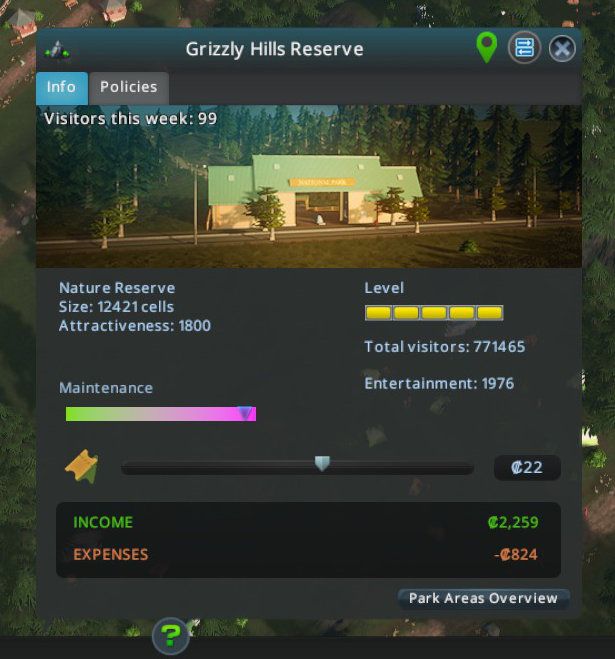 When I built Park Areas outside of zones and near zones, without any regard for pre-existing cim traffic (foot traffic or car traffic), the best park I built was a Nature Reserve park (see above-screenshot). Its income is over double its expenses.

I thought this was pretty good. It certainly is faring better than the Amusement park shown earlier.

But I was always dismayed that the vanilla Park and Plaza buildings I placed were siphoning income from these custom parks. In the Economy window, my city had weekly park income barely pay for the expenses of all parks, plazas, and landscaping. I figured it was better than seeing park expenses eat into my city’s weekly total income (pre-Parklife DLC).

After I discovered the secret of how to make Park Areas pay for themselves and their park building and plaza cousins, I was on a crusade to optimize the heck out of all my old cities with Park Areas.

In order for a Park Area to be effective, it must sit along the path of pre-existing cim foot traffic. That is, if the Park Area were not there and there is just a pathway, you should see a decent number of cims walking along this pathway. If you see few cims walk along your pathway, it is a bad spot to place a Park Area.

So how do you know where cim foot traffic will appear? You don’t. It is hard to predict where the simulation will generate foot traffic. Generally speaking, there should be foot traffic between residential zones and commercial zones, but this is no guarantee.

All you can really do is place some test pathways between areas and wait-and-see for foot traffic. Sometimes you might get lucky and notice lots of cims walking toward an area (or away from an area). Tail them and see where they go.

Once you find a heavy traffic of cims walking to-and-fro, this is an ideal place for a Park Area.

For intercepting urban walkers, I prefer using the Small Park Main Gate and Park Side Gate under the City Park tab. They occupy the least number of cells/tiles compared to gates of the other Park types. It also makes visual sense for high traffic urban centers. But you can choose whichever gate suits your fancy.

I try to space out the Main Gate and its Side Gate at least 8 cells/tiles from each other. This allows the Park Area to appear “natural” in its urban setting. Also, it is far away enough that cims will choose to go through the gates rather than around (depending on how much you charge for Ticket Price).

After you place your Park Area, wait a few in-game weeks (ideally a month) to see what the visitor count looks like after it has had a chance to stabilize. Then, adjust the Ticket Price to see how it affects the visitor count.

How Do I Know If I Am Doing It Right?

You will know if you placed the Park Area along a high foot traffic path if you are making around (and in excess of) ₡2,000 per week only for spending ₡54 per week on two City Park gates. Of course, this is based on the number of visitors to your park.

The screenshot below shows what is possible. 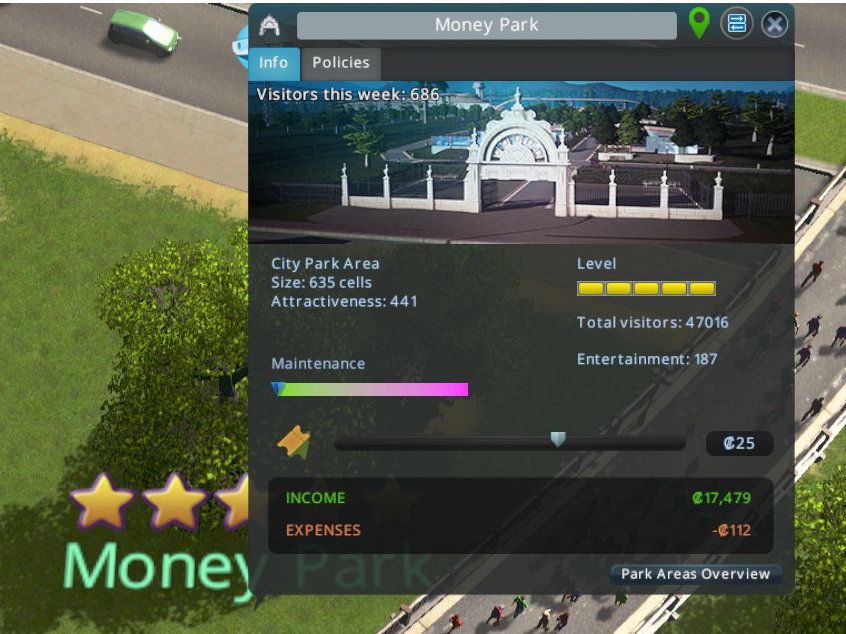 As you can see, Money Park is raking in over ₡17,000 per week and only spending ₡112 per week on maintenance. This park’s income is over 150,000% more than the Nature Reserve shown earlier! Thus, I learned that you can do a lot better. 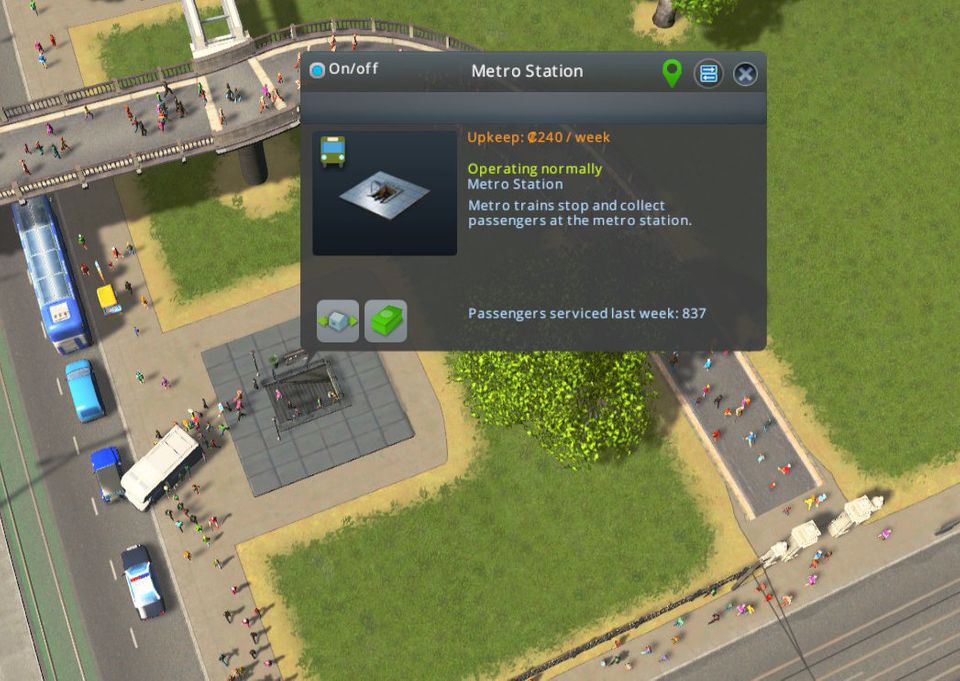 All this is due to the 600+ weekly visitors to the park. This is sourced by a metro station at one of the park side gates.

There is no guarantee that mass transit nodes will provide heavy foot traffic to a Park Area. It just so happened that in this case the cims wanted to walk in the direction of where Money Park was situated.

Ideally you should create pockets of residential zones in your city, think neighborhoods. This gives you lots of opportunity to find and capitalize on many heavy foot traffic paths. You can create many different types of Park Areas for different neighborhoods.

In my opinion, having more than one Park Area looks better than having one ultra-rich Park Area that funnels all the cims through it. But that is just me.

If you capitalize your city’s Park Areas properly then they can make weekly income such as highlighted in region A. 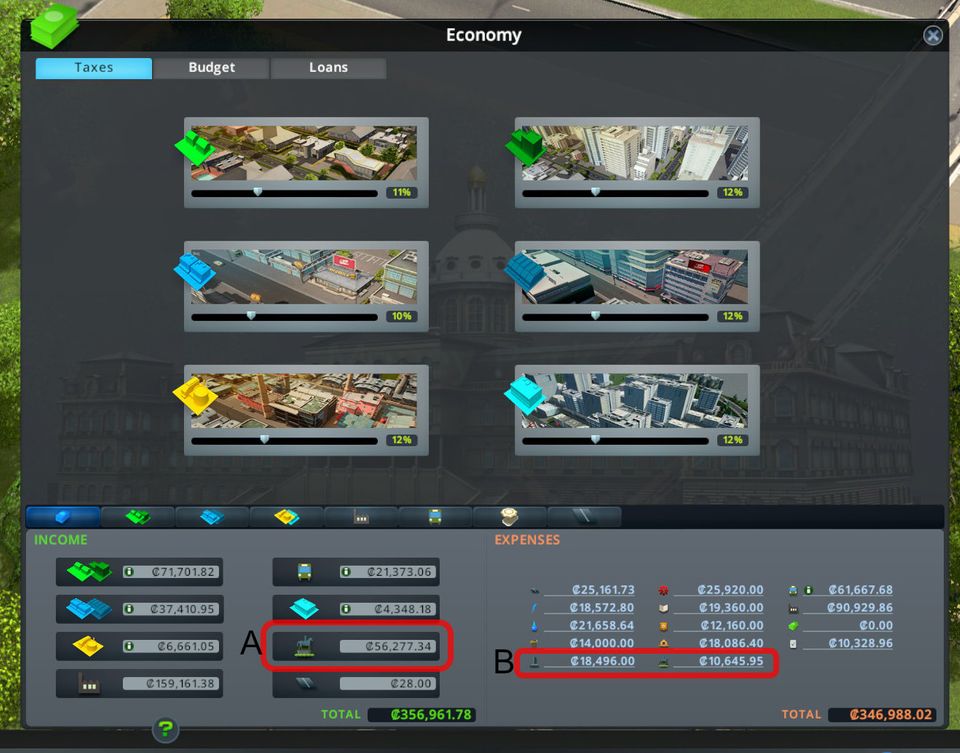 When you compare A’s weekly income with B’s weekly total park expenses AND unique building expenses, you see that Park Areas can more than pay for themselves and other leisure/recreational/tourist buildings by at least 2:1.

I find this a lot more satisfying than what I was getting from Park Areas before.

A “Bug” with Visitor Counts

After you build a few custom Park Areas, you might discover that some of their visitor counts do not seem to match the amount of foot traffic passing through its gates. 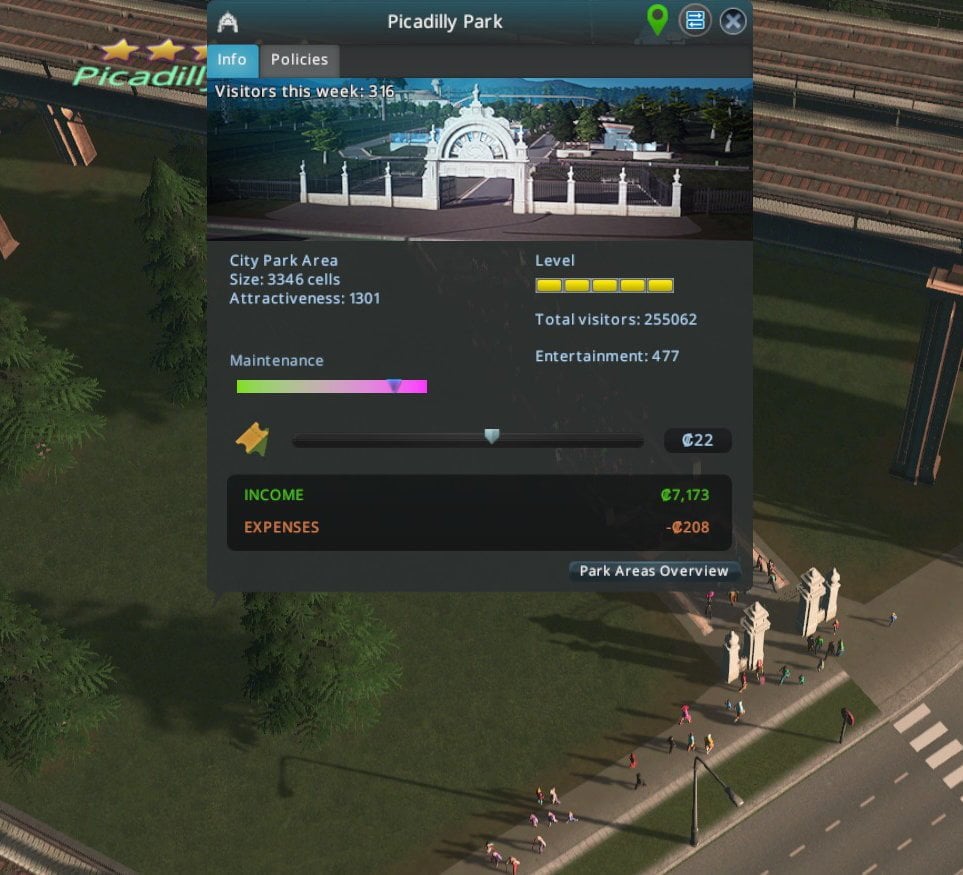 The above-screenshot looks okay. The custom park is making good money. So what is the big deal? 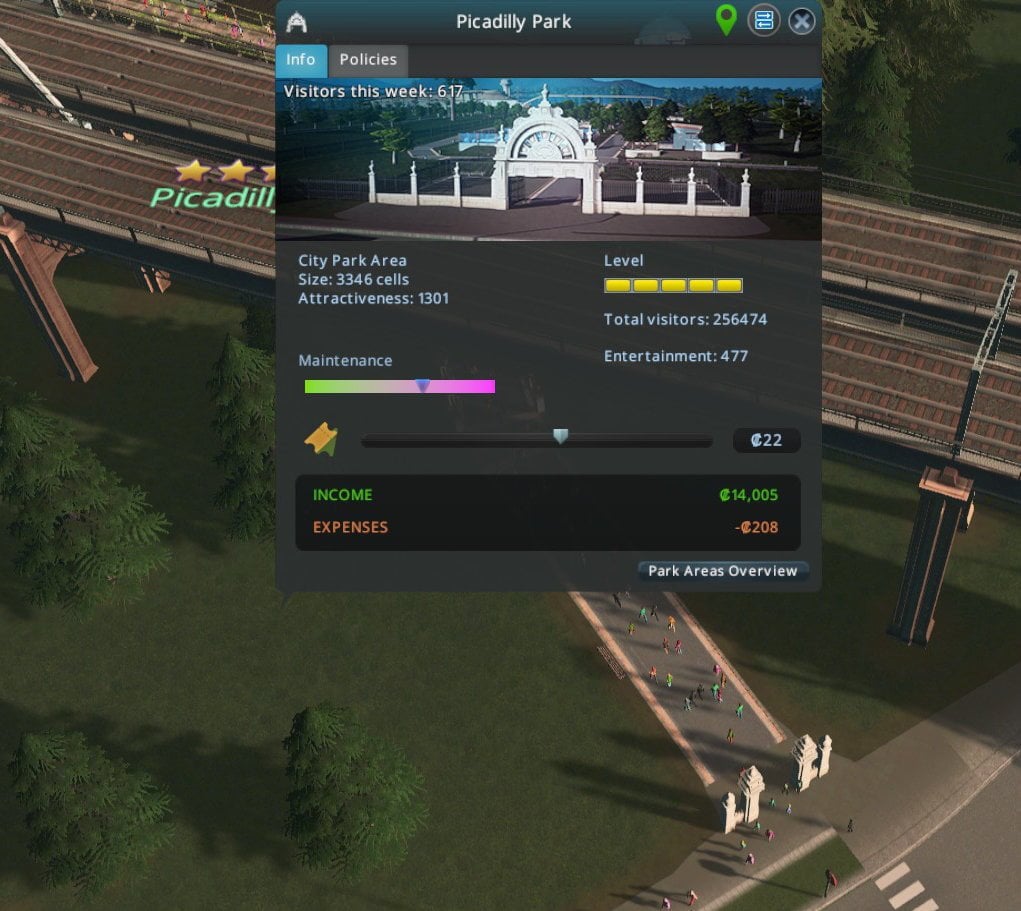 After fixing the problem, the same park is able to make way more money, like 100% more. I was losing half of my park’s potential income due to this innocent-looking bug.

What Is the Problem?

If the pathway connecting to a gate (this applies to all Park gates) is a type of bridge then some cims will pass through the gate and not be counted. A bridge pathway has railings. An example is shown in the red circle area in the below-screenshot.

For your park gates that have this condition, if you zoom in as close as you can on the affected gate then you will see some cims cut through the gate posts. I initially thought this was a visual bug, nothing more. But it actually means something to the game mechanics.

What Is the Solution?

In order for cims to be properly ticketed for entering a park gate, the pathway connecting to the gate must be level to the ground (that is, no bridge type) and be at least 2 cells/tiles in length. The below-screenshot shows a level pathway leading to the same gate.

For your fixed gates, if you zoom in on them then you will notice that no cims cut through the gate posts. Visually, the cims are walking between the gate posts—as they should.

To verify this behaviour for yourself, set up one of your Park gates as described in the Problem section. Watch what happens to your Park’s visitor count week by week and month by month.

These days, I use effective placement of Park Areas to subsidize other city services that cannot make money (like fire and police). It makes managing the growth of my city less frustrating, and a lot more satisfying.

In my opinion, this trick has made the Parklife DLC more than pay for itself. But boy, figuring this stuff out was not obvious from the outset.

I hope you found this guide useful. It resulted from many attempts (and lots of failures) to be more effective at using the DLCs provided to us.

Now this makes me wonder if there are secrets with the other DLCs that I may have missed in my hurry to try out all the cool buildings.