An English version of my guide. I wrote this one in game version 1.0.2 so little changes after that version would not be included. By the way, my English is not very good. 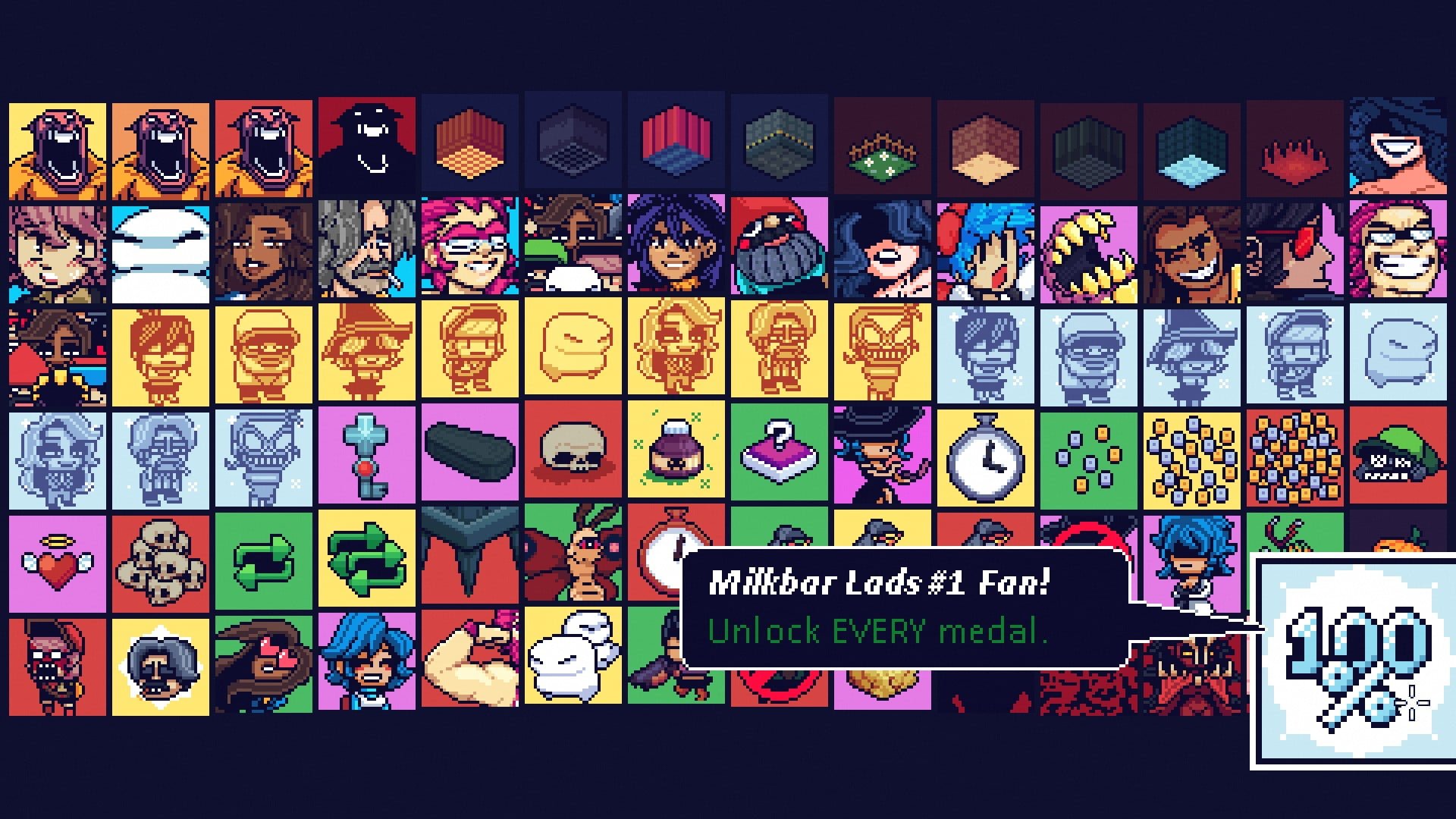 1. The four achievements with Chunks icon are corresponding to four difficulties, which start from Normal difficulty;
2. Floor achievements. Get them easily after reaching the true ending;
3. The last achievement in the first line to the sixth in the second line are some ‘Unlock Characters’ achievements;
4. The seventh achievements in the second line to the first in the third line are some ‘Unlock Costume’ achievements:
①Finish the Darkwood floor under the Painful difficulty with Jeff to unlock Jeff’s costume;
②Beat the Chunk Boss in one minute with Jules to unlock Jules’s costume;
③Make each character reach the true ending to unlock Cordelia’s costume;
④Break the game console with Digby in Attic Sanctom floor to unlock his costume;
⑤Reach Exit Realm floor with Mumba under the Painful difficulty to unlock his costume;
⑥Finish a game without breaking a pot with Lydia to unlock her costume;
⑦Don’t eat a heart before entering a loop with Luis to unlock his costume;
⑧Knock out Chunk each possible floor with Fuji to unlock her costume;
5. Eight normal ending achievements and eight true ending achievements. No need to explain;
6. The key and coffin achievement can normally unlock in the true ending;
7. ‘Spree Killer’, requires finishing a challenge room in 15 seconds;
8. ‘Exterminator’, knock out Chunk for the first time;
9. ‘Secret Secret’, reach 10 secret floors in a game;
10. ‘Hope She Notices You’, buy everything in Cordelia’s shop in the first floor;
11. ‘Speed runner’, finish a game in 20 minutes;
12. ‘Fill My Pockets”Fill My Wallet”Fill My Vault’, store 100020003000 golds in a game;
13. ‘Die’, just die;
14. ‘Without a Hitch’, finish a game without hurt;
15. ‘Massacre’, get 6 kills in a shot time;
16. ‘Another Go-around’, start a loop in Balcony floor;
17. ‘Again?!’, start a second time loop;
18. ‘Mouse Trap’, hit Chunk with the traps in Laboratory floor;
19. ‘Homerun Hitter!’, kill a moth with melee weapon when it’s bumping;
20. ‘Speed Demon’, in Exit Realm floor, stamp all three buttons in 5 minutes;
21. ‘Collector”Hoarder”Klepto’, get 152535 items in a game;
22. ‘Window shopper’, finish a game without entering a shop;
23. ‘Roided Out’, buy all the updates(strengthlifespeed) in a game;
24. ‘Scrap Metal’, retrieve 5 weapons in a game;
25. ‘Happy Halloween’, open the game in Halloween! You can change your computer’s time for this achievement;
26. ‘Outta the Park’, reach 20 combos with Digby.
27. ‘Shiny’, retrieve Golden Gun with Luis;
28. ‘Nothing Comes Free’, get 10 free items with Lydia in a game;
29. ‘Mama‘s Girl’, buy everything in the shop with Cordelia;
30. ‘Heavyweight Champ’, beat a boss in 30 seconds with Fuji;
31. ‘Mumba Shoot Mumba’, get the gun ‘Mumba Launcher’ with Mumba;
32. ‘Of Reliable’, finish a game with Jules only using shotguns or RPG;
33. ‘Too Old For This’, finish a game without getting a item with Jeff;
34. ‘Midas’, break 5 golden pots in a game;
35. ‘START RUNNING’, get chased by Chunk;
36. ‘RUNRUNRUNRUNRUN’, get chased by Chunk in Old Set floor;
37. ‘This is it’, meet Boss Diavola in the true ending;
38. ‘Triumph’, beat Boss Diavola;
39. ‘Milkbar Lords #1 Fan!’, get every achievements above.

About unlocking Fuji’s second costume, you just need to knock out Chunk in four floors to the normal ending. No need to go through hidden floors for the key.

The mini map would disappear when you start a second time loop or start a high difficulty game, it’s recommended to get a compass item or a x map item. Before you start exploring each floor, remember to find an empty room and knock out Chunk. 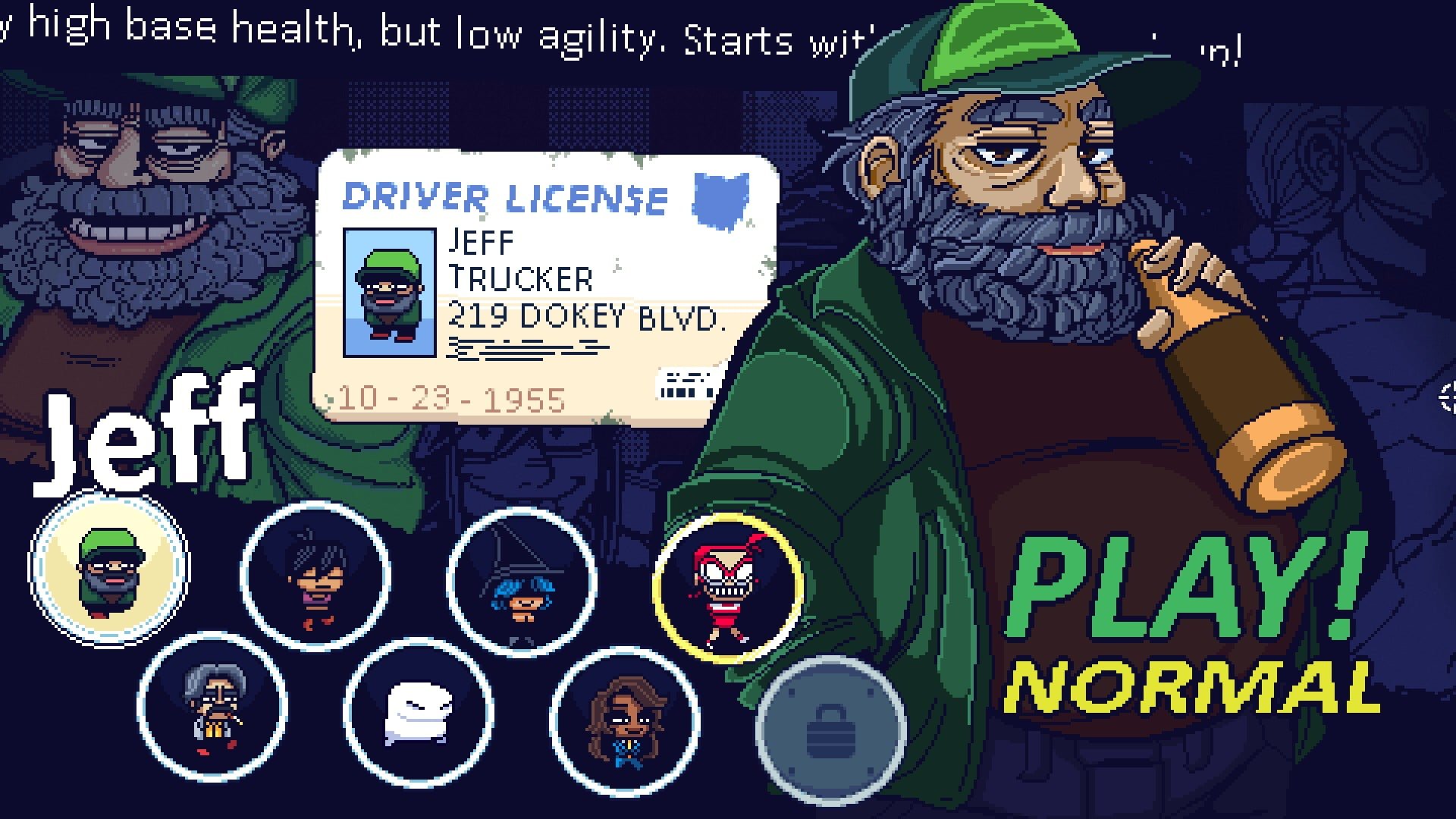 No need to unlock.
8 hearts at the beginning, low move speed, low jump height, start with a 12 dps handgun 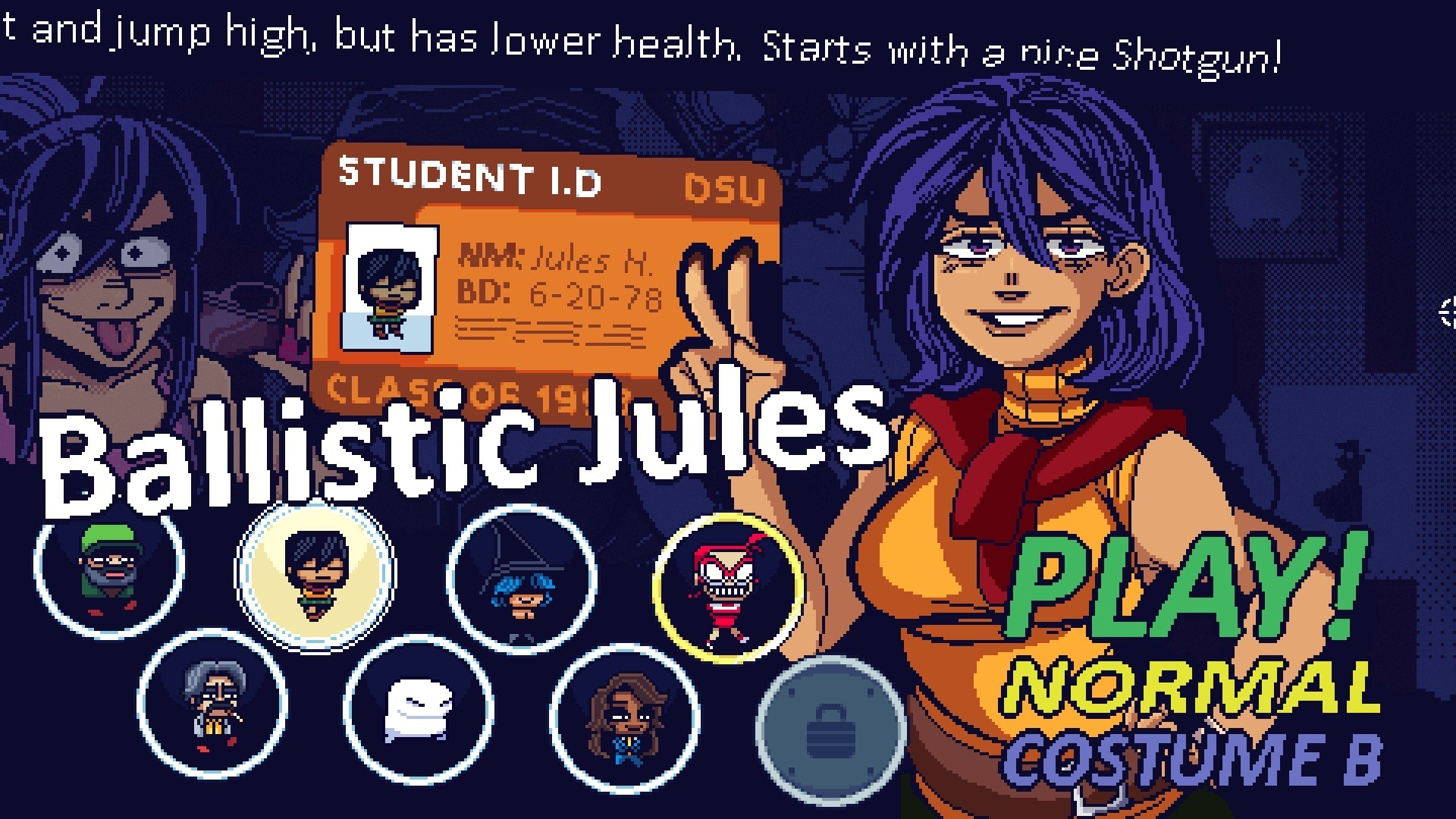 No need to unlock.
4 hearts at the beginning, high move speed, high jump height, start with a 11 dps shotgun 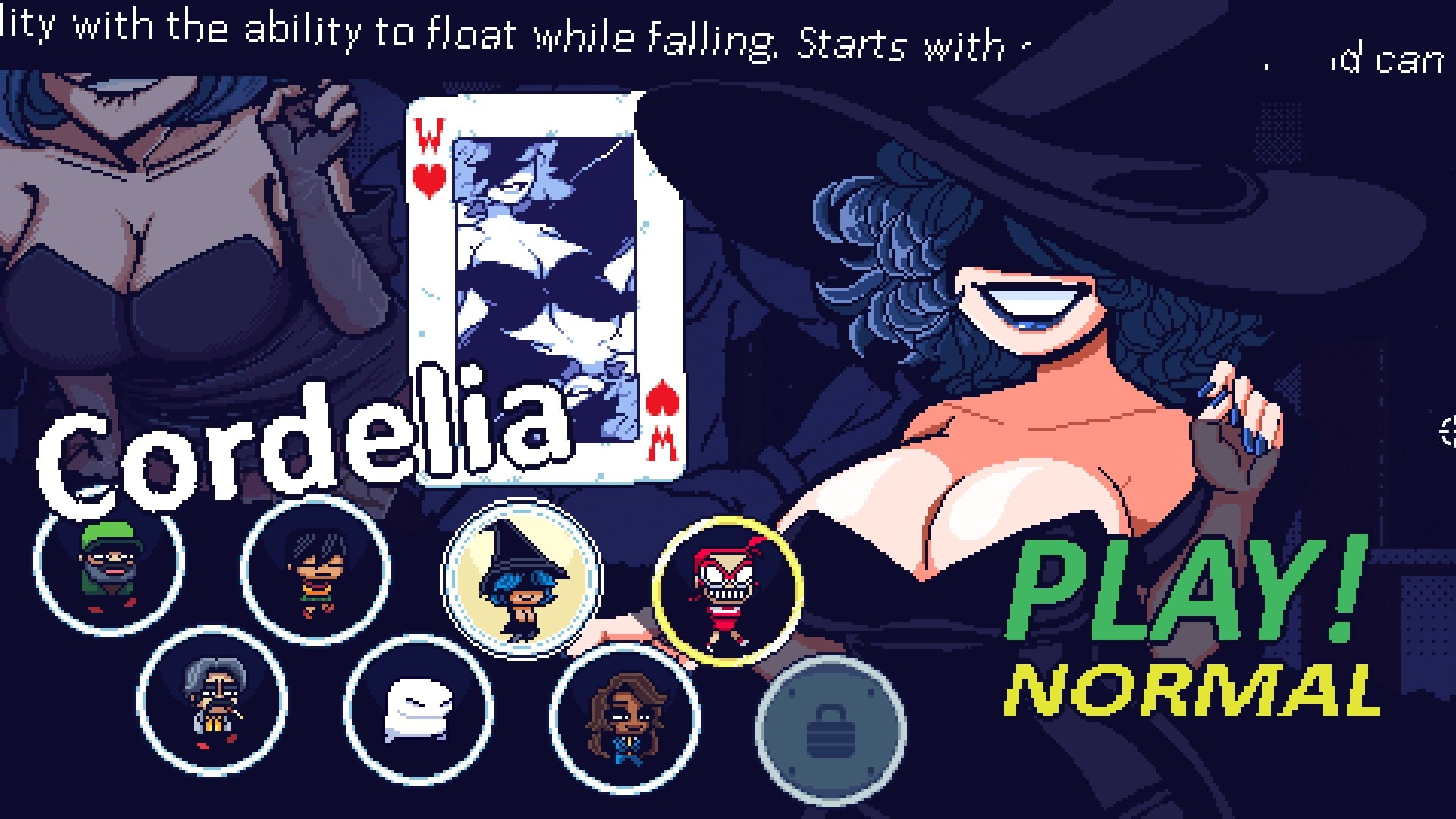 Beat the game with Jeff an Jules to unlock.
6 hearts at the beginning, middle move speed and jump height(can float after a jump), start with a 18 dps wand. All the weapons she would get in the game are wands too. 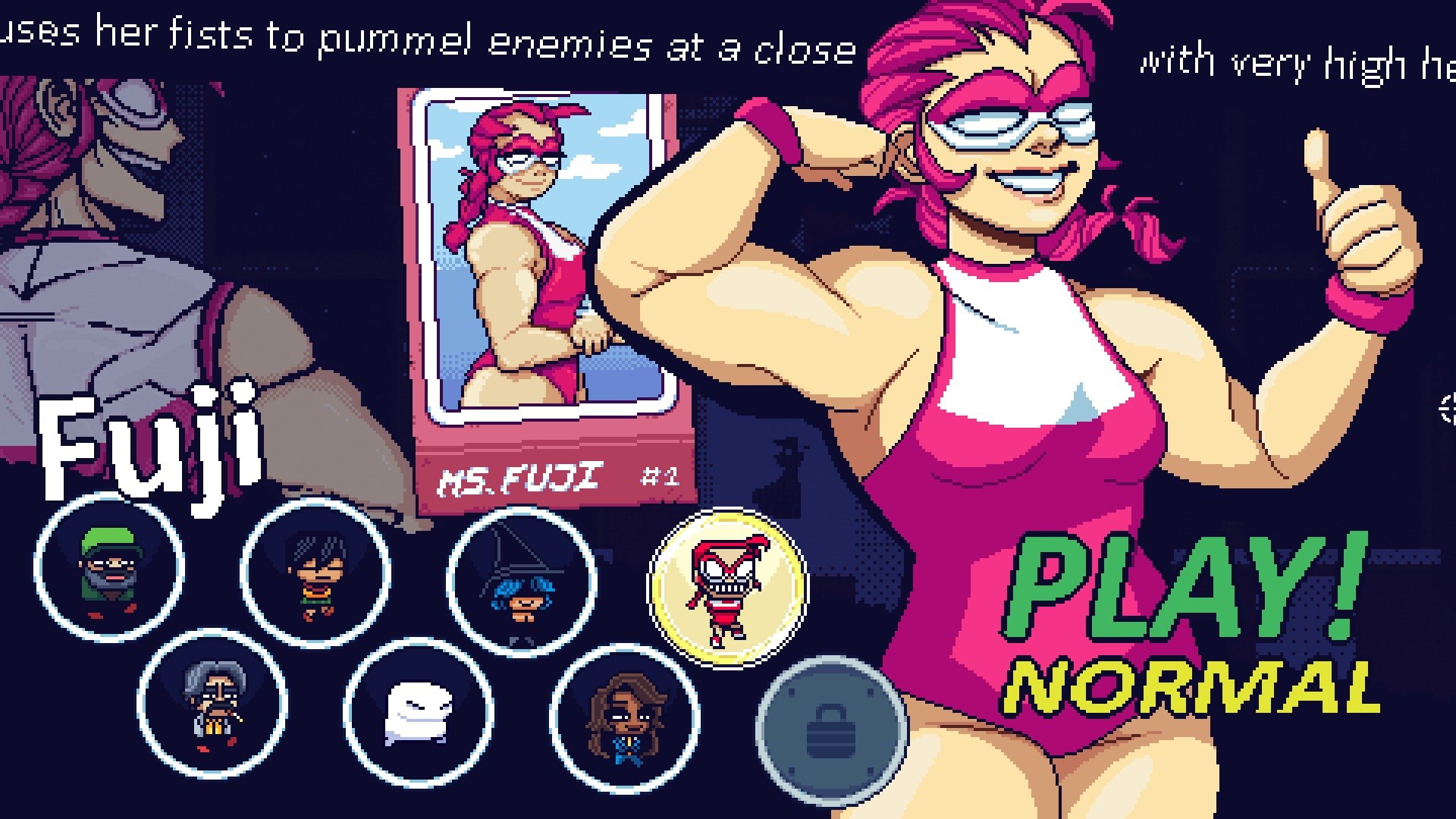 Reach 12 hearts limit to unlock this character.
8 hearts at the beginning, middle move speed and jump height, start with a 24 dps boxing glove. She can walk on the pots to break them and she can’t carry a second weapon. She can dash when firing in the sky. 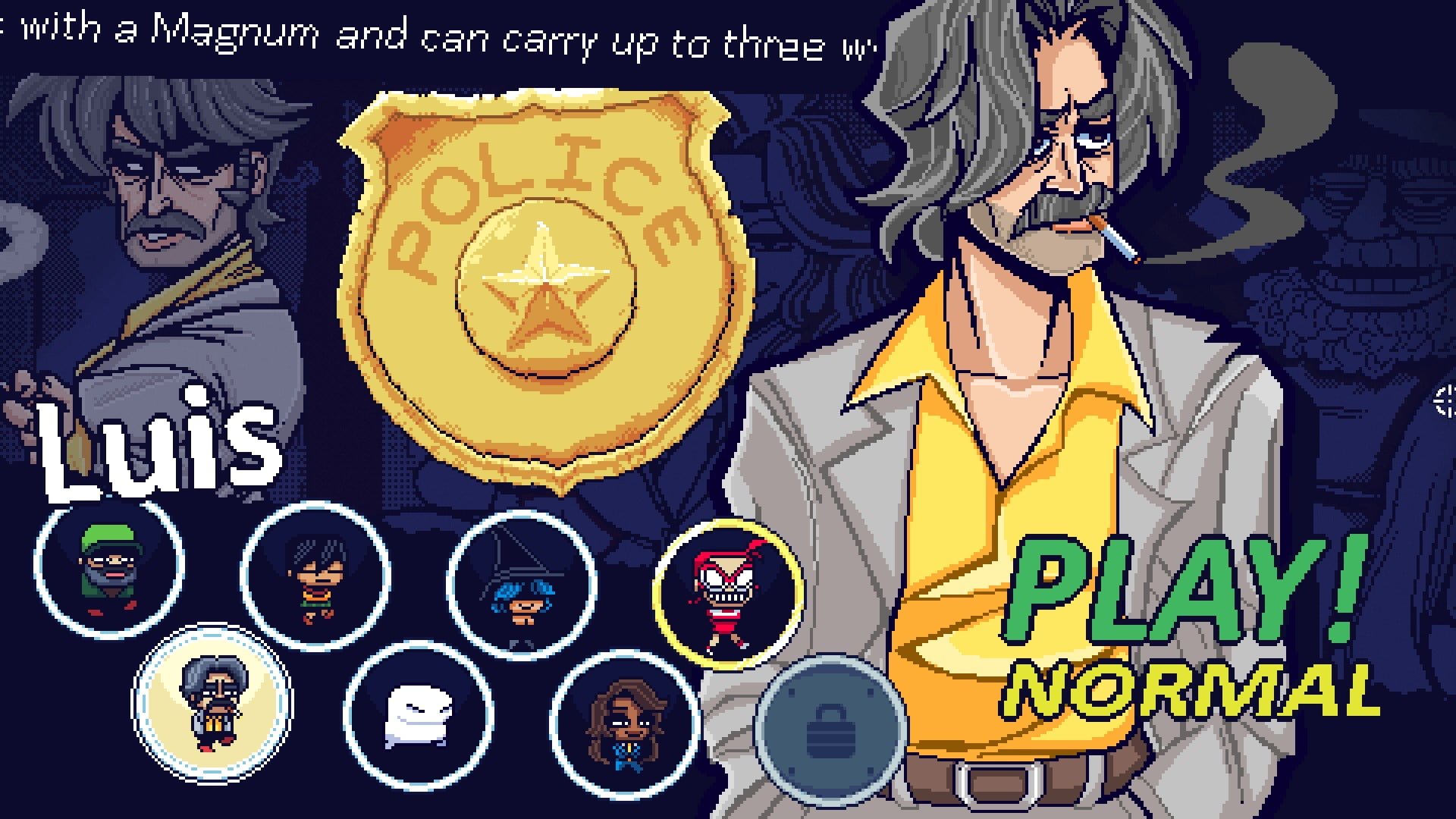 Start a loop to unlock this character.
6 hearts in the beginning, middle move speed and jump height, start with a 23 dps handgun. He can carry two weapon apart from his main weapon. 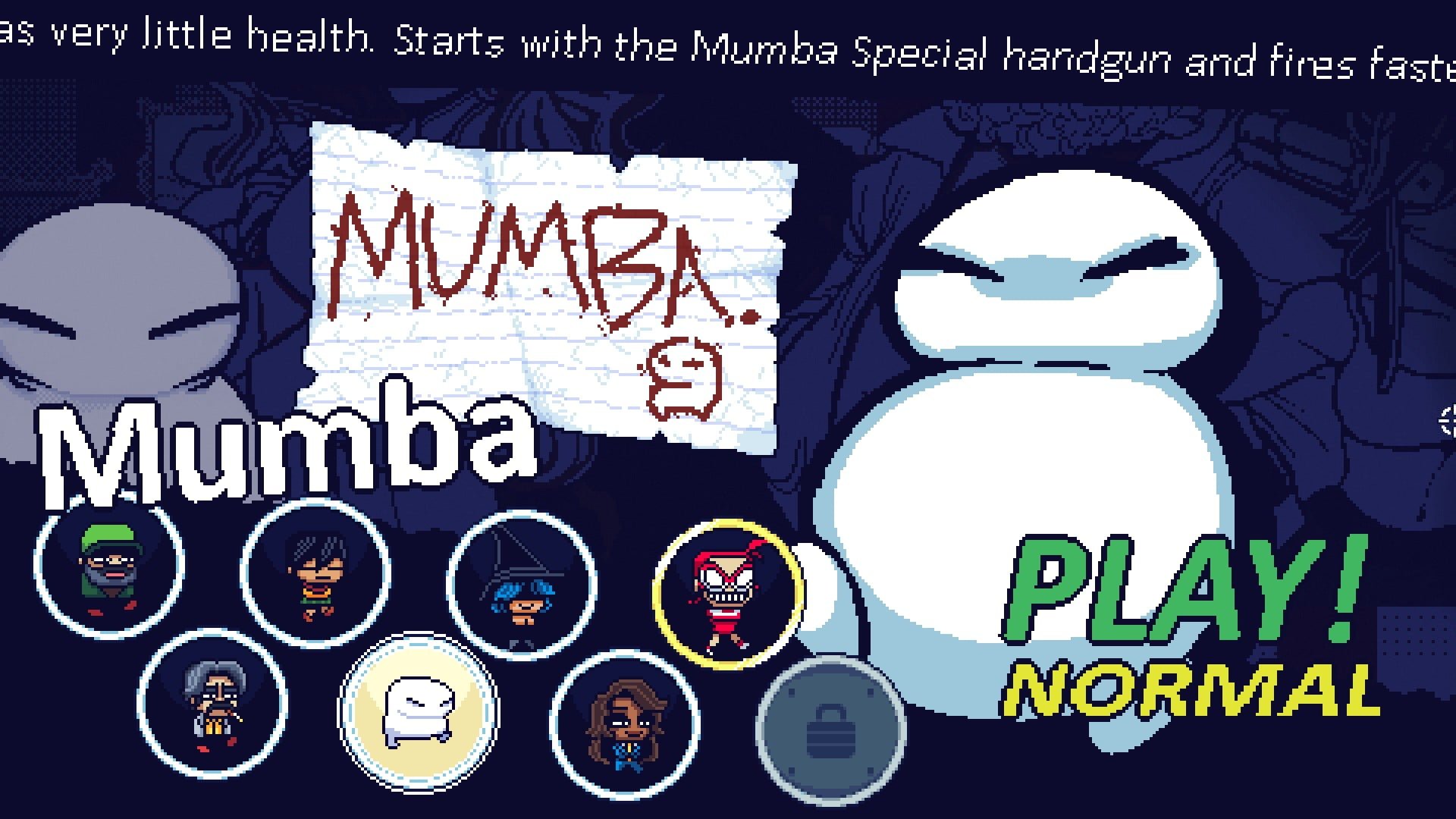 You can randomly find him in Laboratory floor.
2 hearts at the beginning, high move speed and jump height, start with a 14 dps handgun 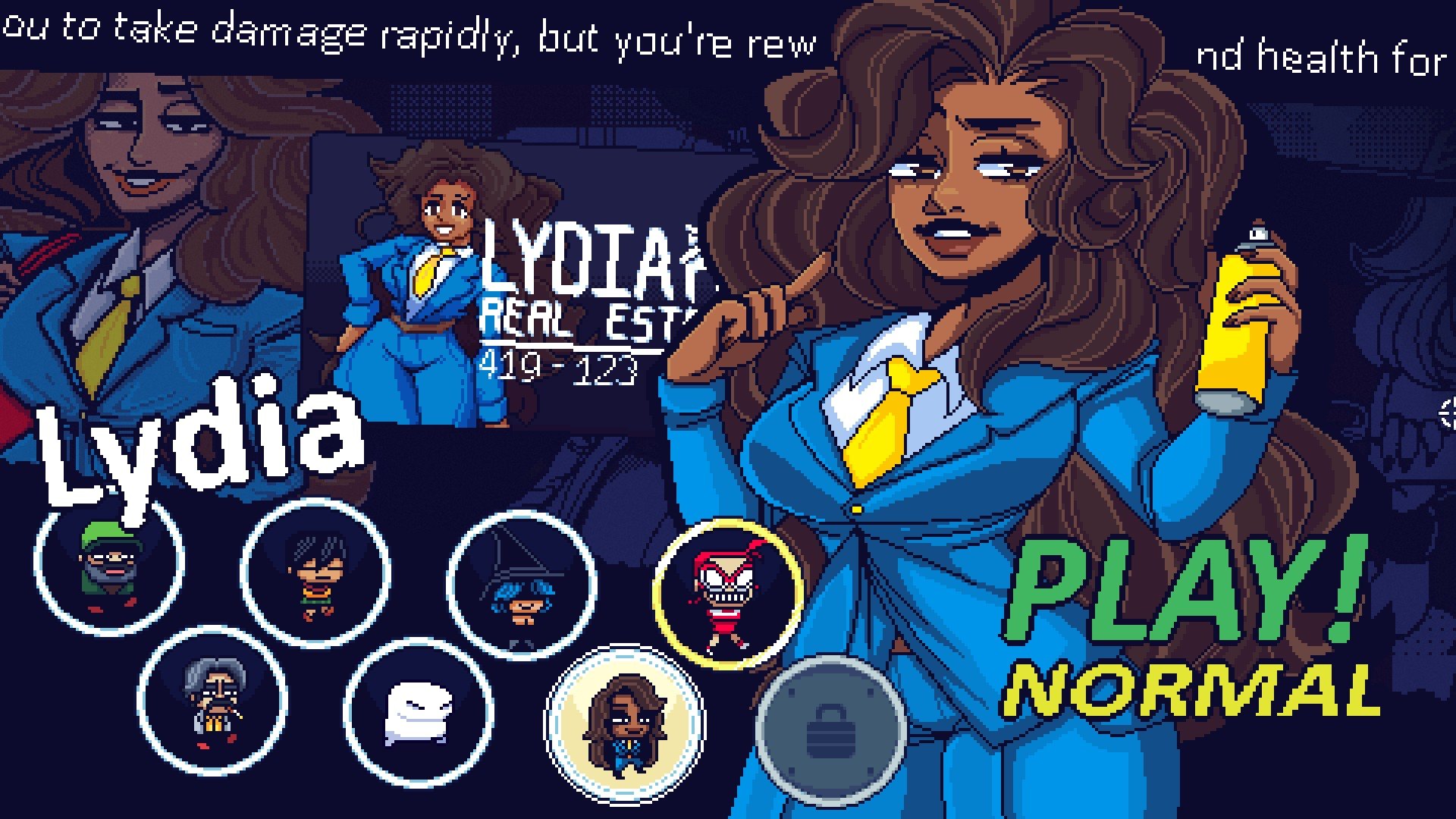 Store 1000 golds to unlock this character.(‘store’ means not use)
5 hearts at the beginning, middle move speed and jump height, start with a 4 dps mist spray. She carries 200 golds at the beginning and she loses them slowly. Once she runs out of gold, she would take damage. Every 600 golds she gets, there would be a free item nearby. 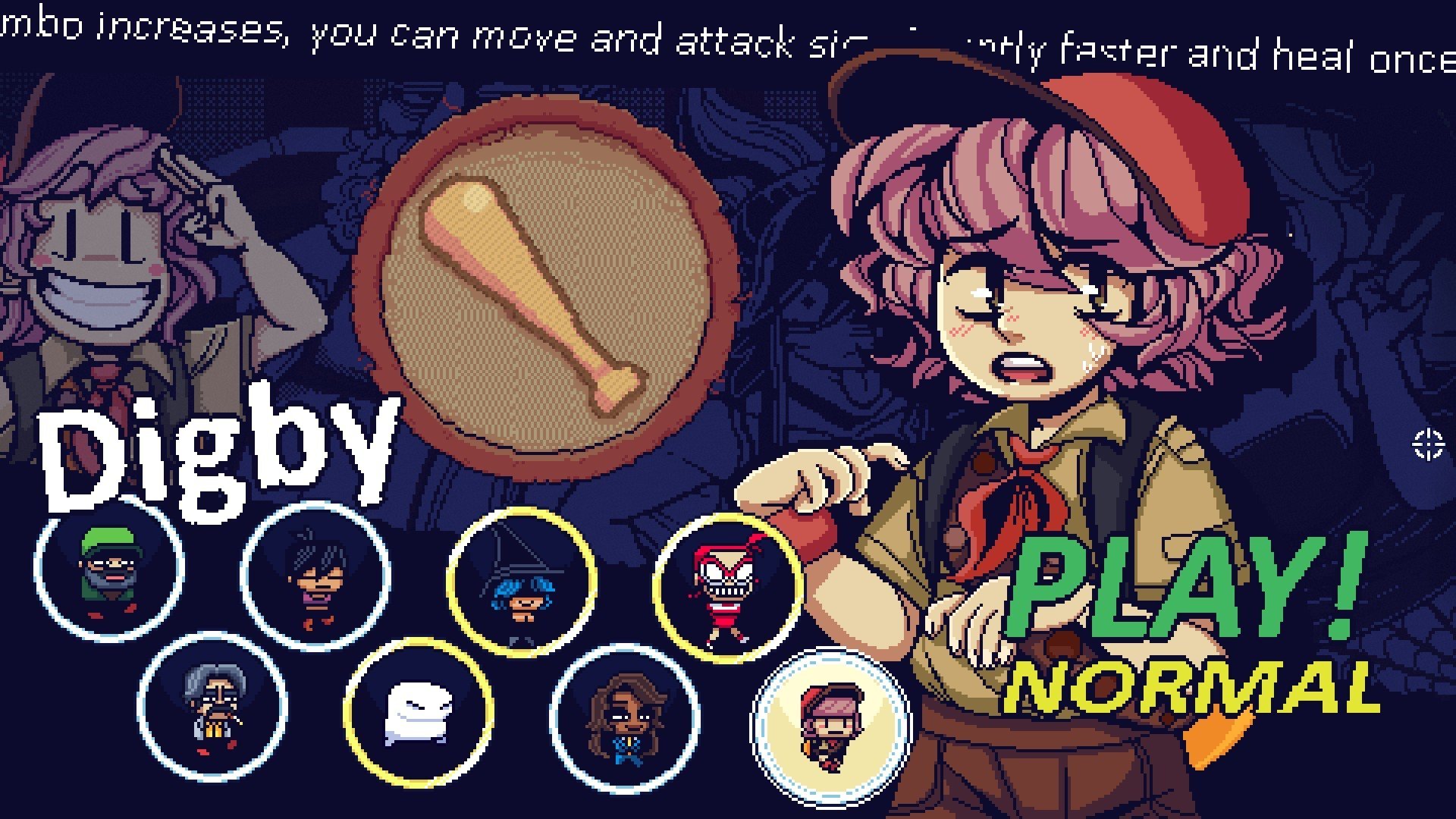 Buy every floors’ maps in a game to unlock the character.(5 maps in true ending)
4 hearts in the beginning, high move speed, low jump height but can jump twice, start with a 20 dps basebll bat. He can only carry melee weapons and throwing weapons. He can get combos after killing enemies. The more combos he gets, the higher move speed and higher damage he gets. When a high combo ends, he can recover some hearts.

Some experience and advices

1. This game’s weapons’ range, include melee weapons, are not starting from 0. You need to keep a distance from monsters.
2. This game’s ranged weapons are definitely safer than melee weapons, let alone some monsters’ bullets have tracking effect..
3. The purple fluid some monsters left hurts a larger range than you can see.
4. Some vertical attack weapons have great advantages in dealing with some monsters. You can consider to carry one in hand.
5. Some items are really stupid and useless, like turning you screen to grey, transforming item treasures to weapon treasures and so on. By the way, some impact weapons and items would kick the enemies around.
6. Bosses:
Little brains which summoned by the huge brain won’t give combos when killed by Digby.
The pumpkin Boss’s second attacking, the speed of thorns are the same to your speed.
You can stay behind Kraken to avoid most of it’s attack.
7. You need to be careful when Fuji gets hit. Everyone jumps after getting hit.

I’ve skipped some ‘not that useful’ words. If you have some questions, why not leave them in the comment?