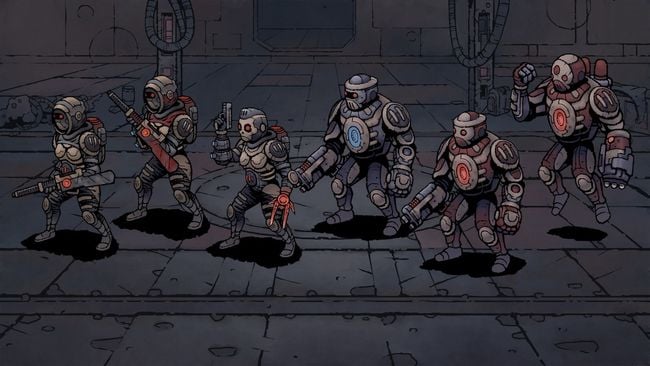 This is a guide to explain simple mechanics to allow new players an easier first experience, and then learn by themselves to master the game.

Special words you don’t know : (there’s a codex in the menu you can refer to in game when you don’t know this stagger word the ennemy just inflicted to your crew)

First of all, name your characters, give them portraits you like, so you’re deeper into the adventure!

Okay there are lots of classes and perks, what to choose? Well let me clarify this.

Here are the classes and how a beginner team can be built:

For the following chapter we are going to use an example:

The perks can be chosen depending on what you prefer, but first i’ll suggest recycle on everyone, as it’s always nice to have card advantage (or evasion for sustain).

Okay so I’ll be using our example to talk about this because there are so many options.

So here are some things I found out :

Generally I think it is better to specialize your team so everyone has a role and you always have the cards you need in hand.

Let’s with our team tracker + medic + scrapper how it goes:

Tracker: will do heavy single target dmg, both ranged and melee.
So it has equipped Precision weapon + Energy blade + weapon booster + shield

Scrapper: will throw bombs at groups with little HP and otherwise set traps which will stun and interrupt the enemy. He will also have recycle boosting cards for his team. Do not think he is useless because he does less dmg, he is the one bringing you tons of loot.
Equipement: Scavenging tool: Shield

Medic: Will buff the tracker (or the scrapper if it’s a group of ennemy) and stay in invisibility
Equipement: Shield

You also have, at level 4, a second class to choose. I suggest choosing something related to your main stat (i.e. tinker for scrapper because both use scavenging stat). You won’t need everything, but even 1 or 2 excellent perks for your build are enough to choose this specialization.

Obviously if you use a Bruise, because the bruiser cannot be the only dmg dealer as he is only melee, so you would have to use a scrapper and his bombs for instance (which rely on scavenging skill to get boosted instead of weaponry, so it’s fine)