A comprehensive guide on the Void Hunter build I discovered and adjusted for the perfect Guerilla Warfare build.

Shadowshot: Moebius Quiver will be the choice for this class, being able to fire two multi-projectile weakening, suppressing tethers is good for adds, as well as bosses.

The 4 abilities I believe compliment each other are Marksman’s Dodge, Triple Jump, Snare Bomb, and Suppressor Grenade. These abilities paired with the following aspects and fragments will start to make a lot of sense, hang in there. 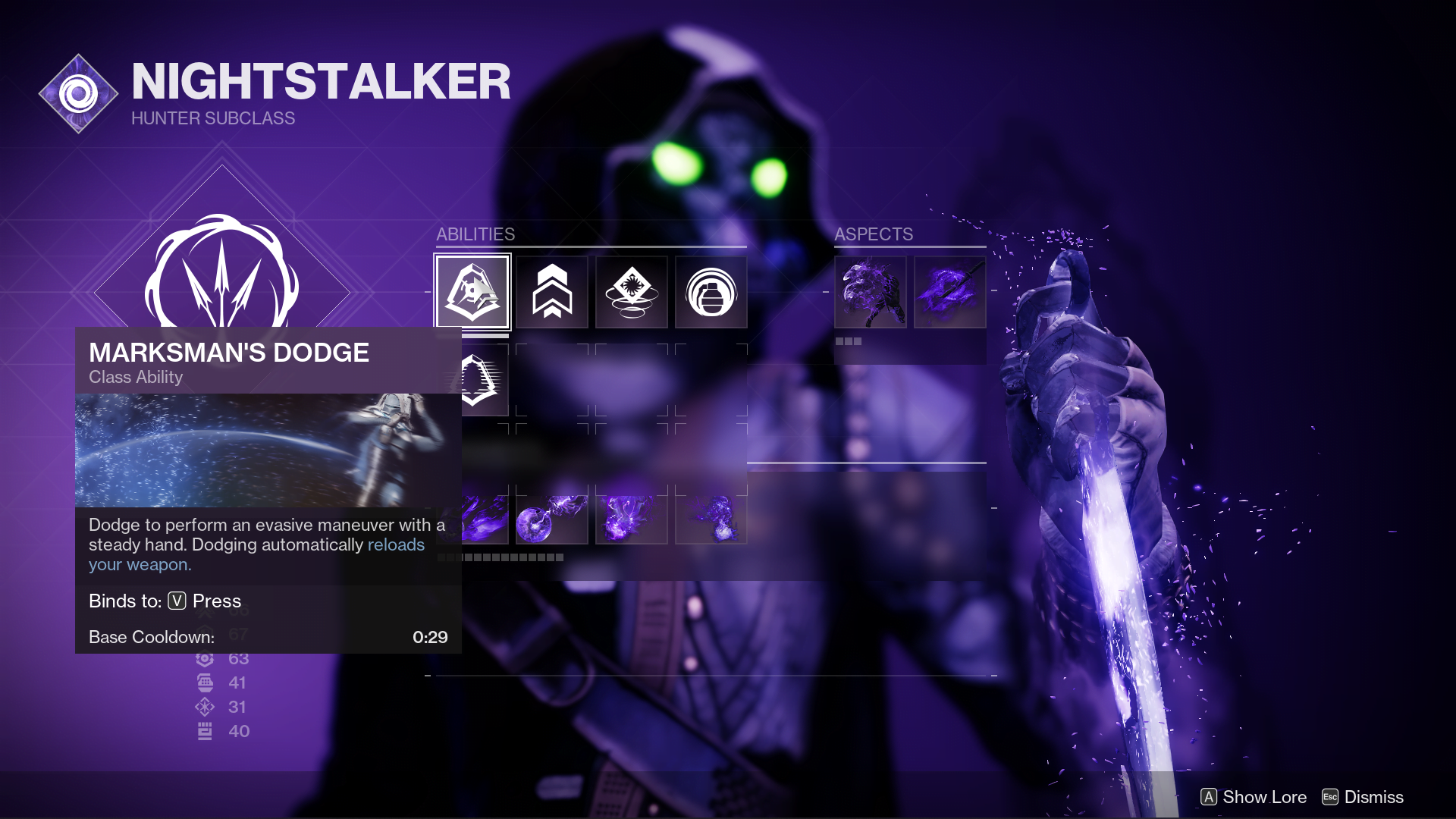 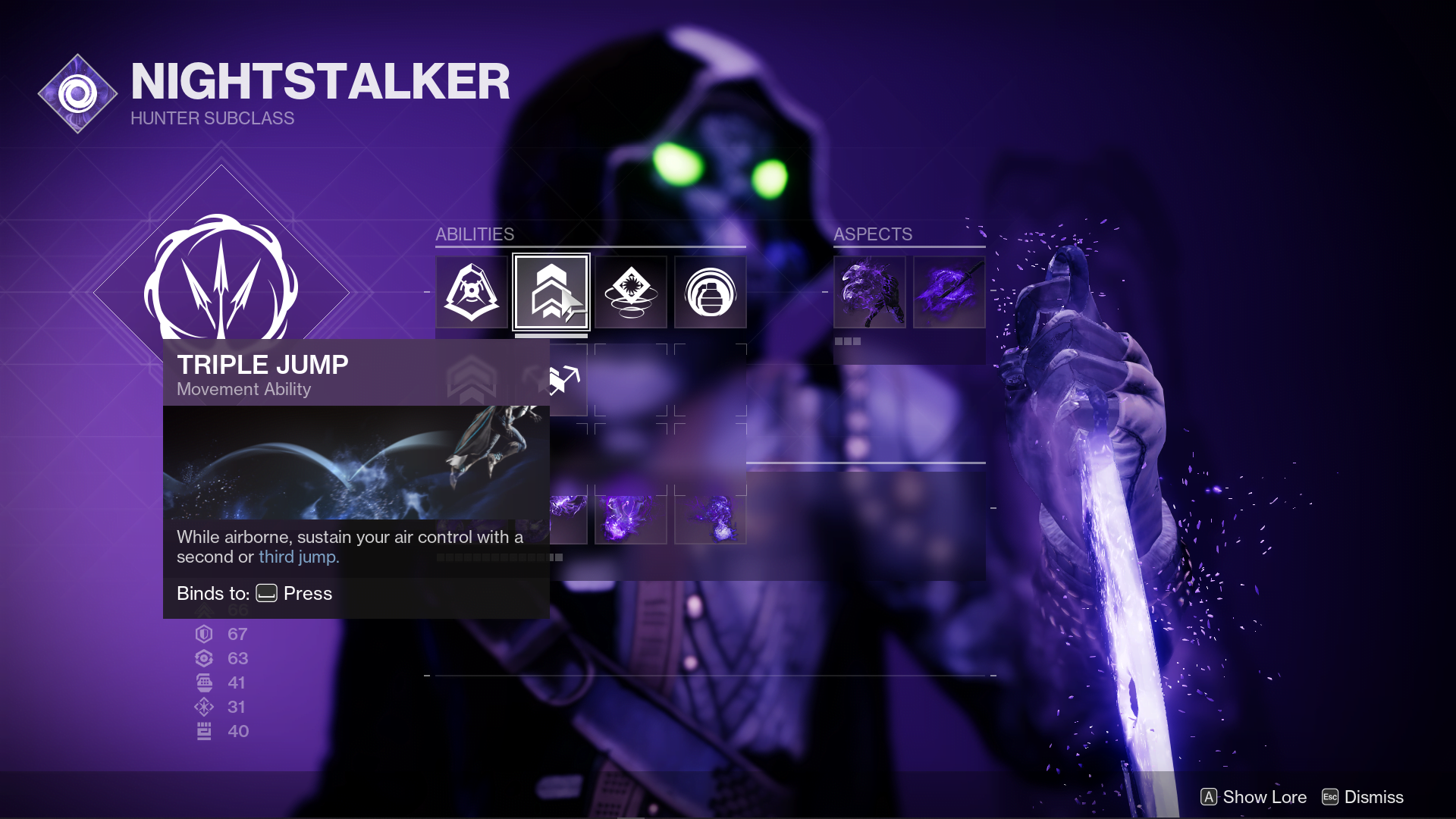 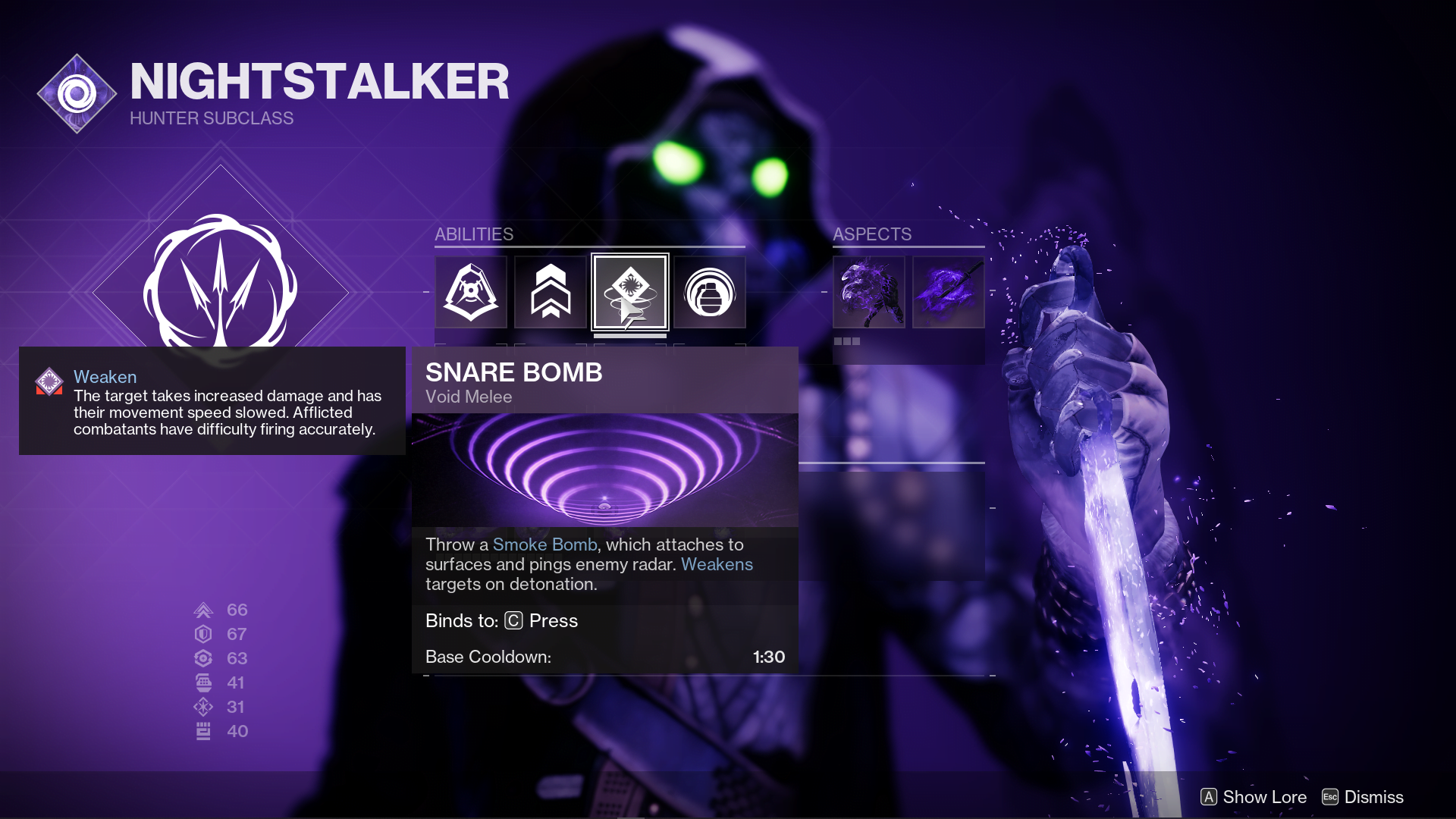 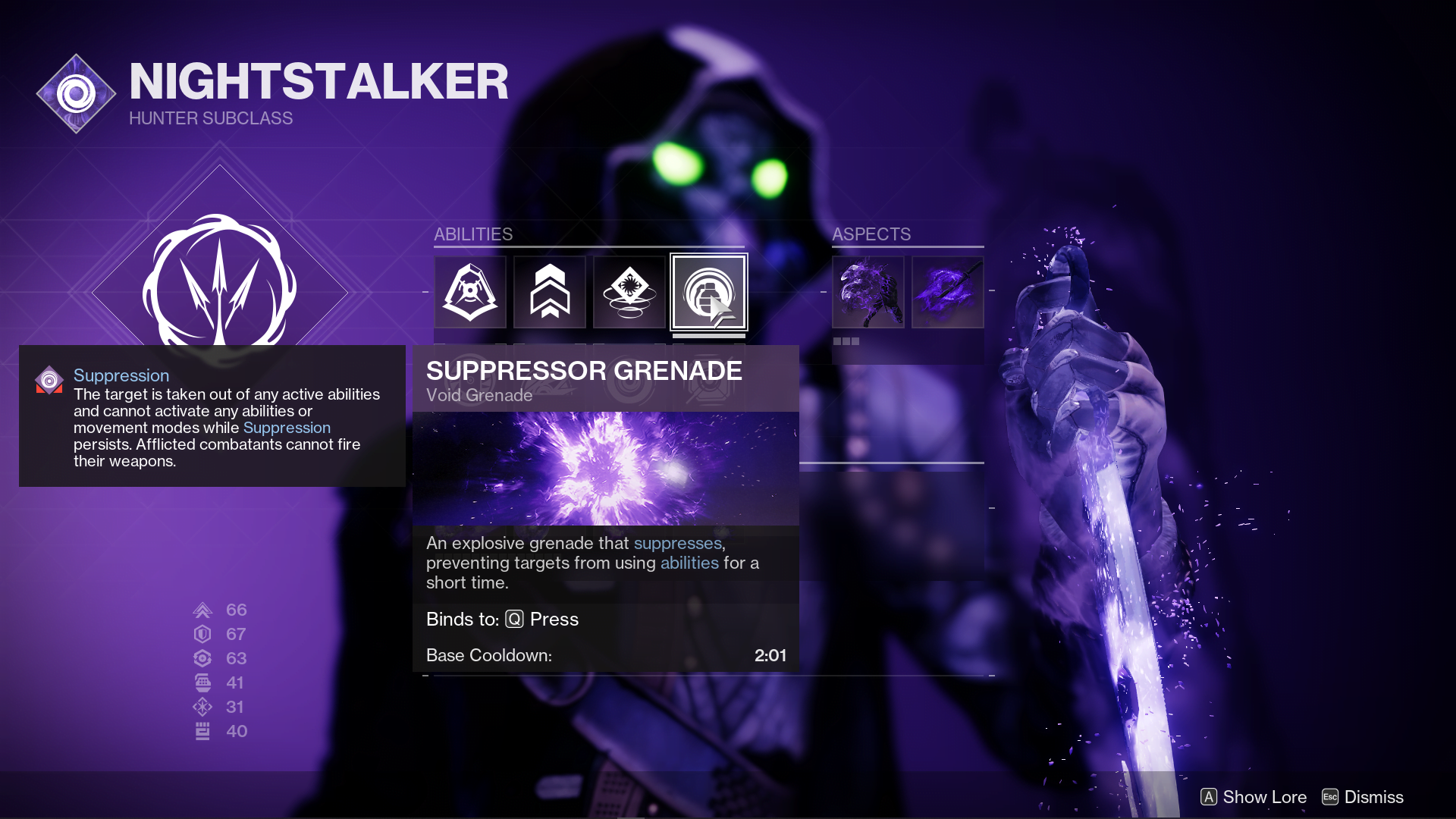 Vanishing Step is a no brainer. With Marksman’s Dodge paired with this aspect, you can reload while you turn invisible, giving yourself a fantastic Get Out Of Combat Free™ card. In PvE, paired with the weapons I will list later in the guide, the “Guerilla Warfare” style tactic of this build is is fantastic when paired with this Aspect. 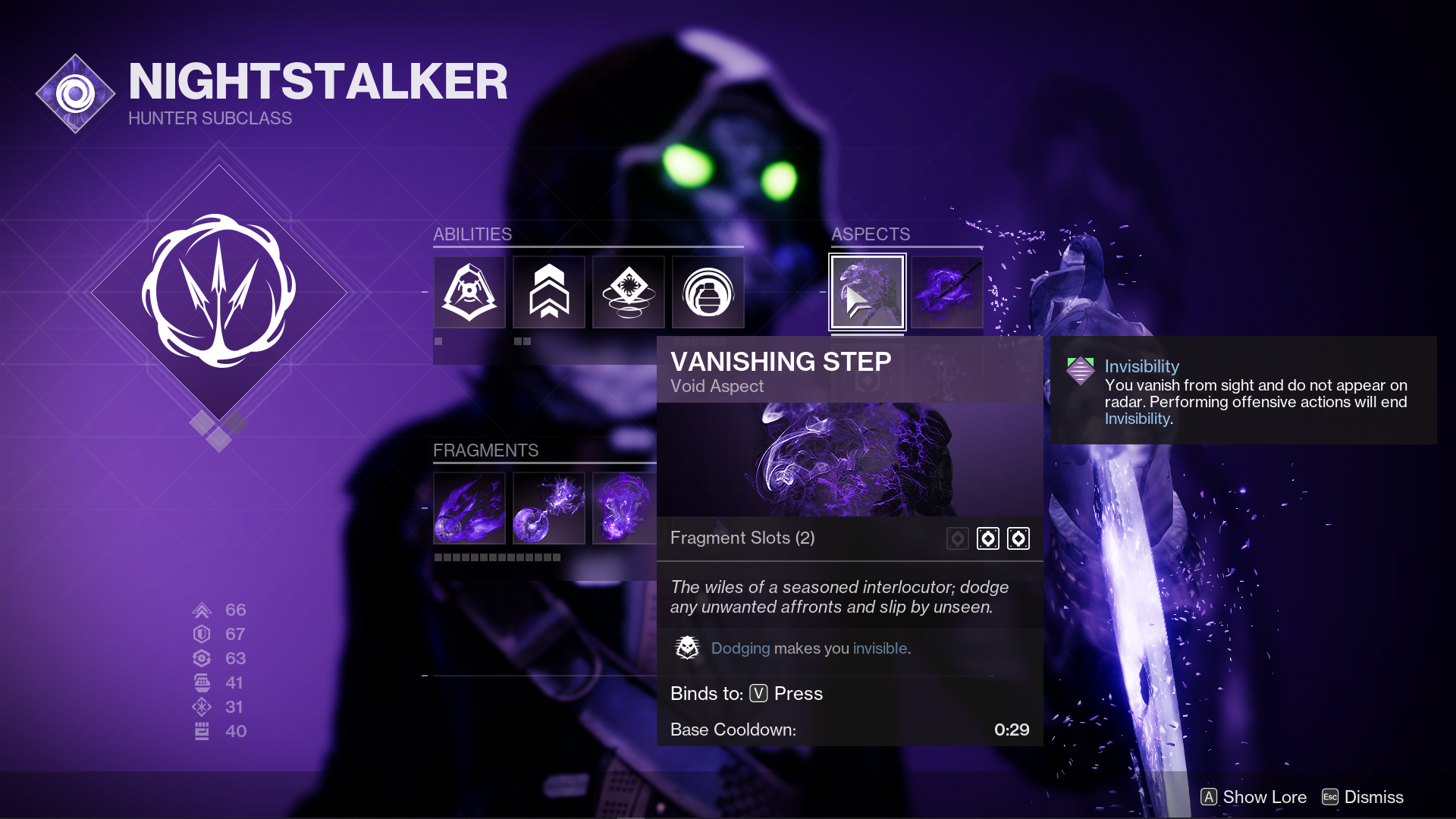 Stylish Executioner is the other big dog Aspect. Of course, you want to max out your potential Fragments, but this Aspect is so much more than free Fragments. Paired with the Suppressor Grenade, this aspect grants you free invisibility when you kill weakened, suppressed, or volatile targets. This is paramount to the weapons I recommend. They pair ever so elegantly together to maximize your use of these abilities. 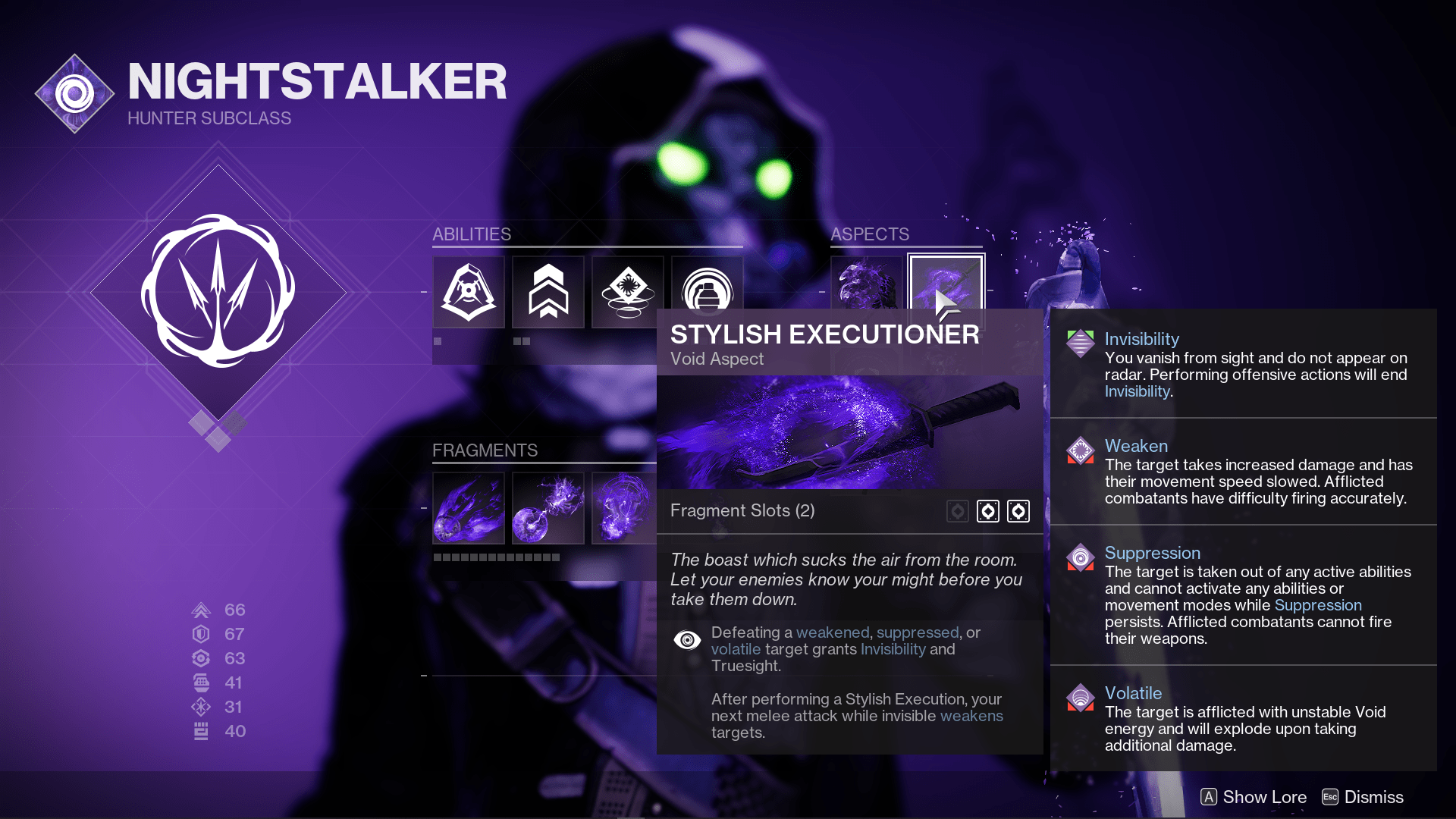 Echo of Undermining is probably the most unexpected due to it’s -20 Discipline debuff. If you can get past that, you will realize Void grenades that weaken, AND suppress targets are very important, and also increase your ability to kill targets faster and with less resistance. 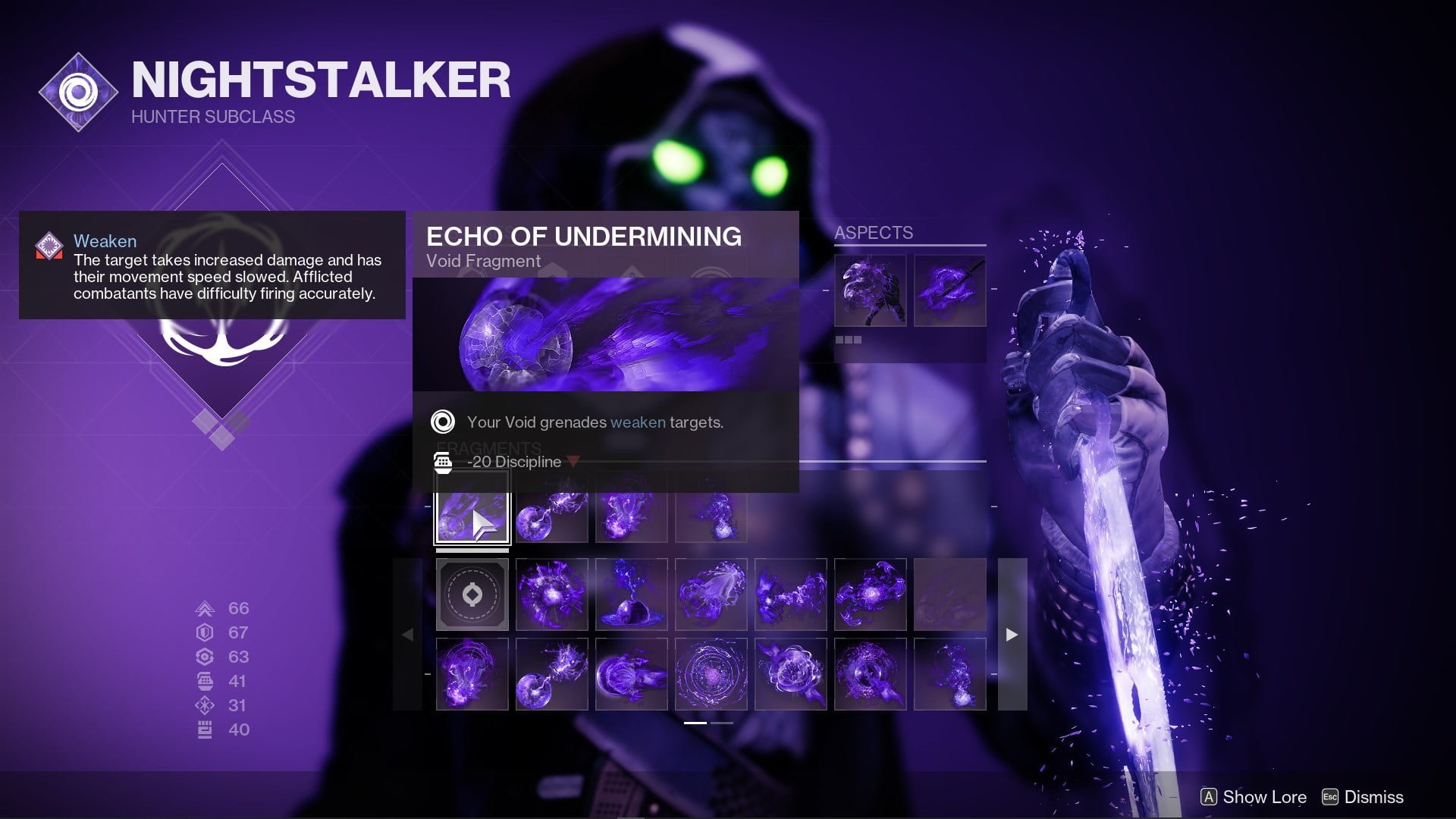 Echo of Leeching is the META. Paired with the weapons in this guide, you are practically invincible. This Fragment is incredibly broken (in a good way) and will make it’s presence known every time you start slaughtering adds. 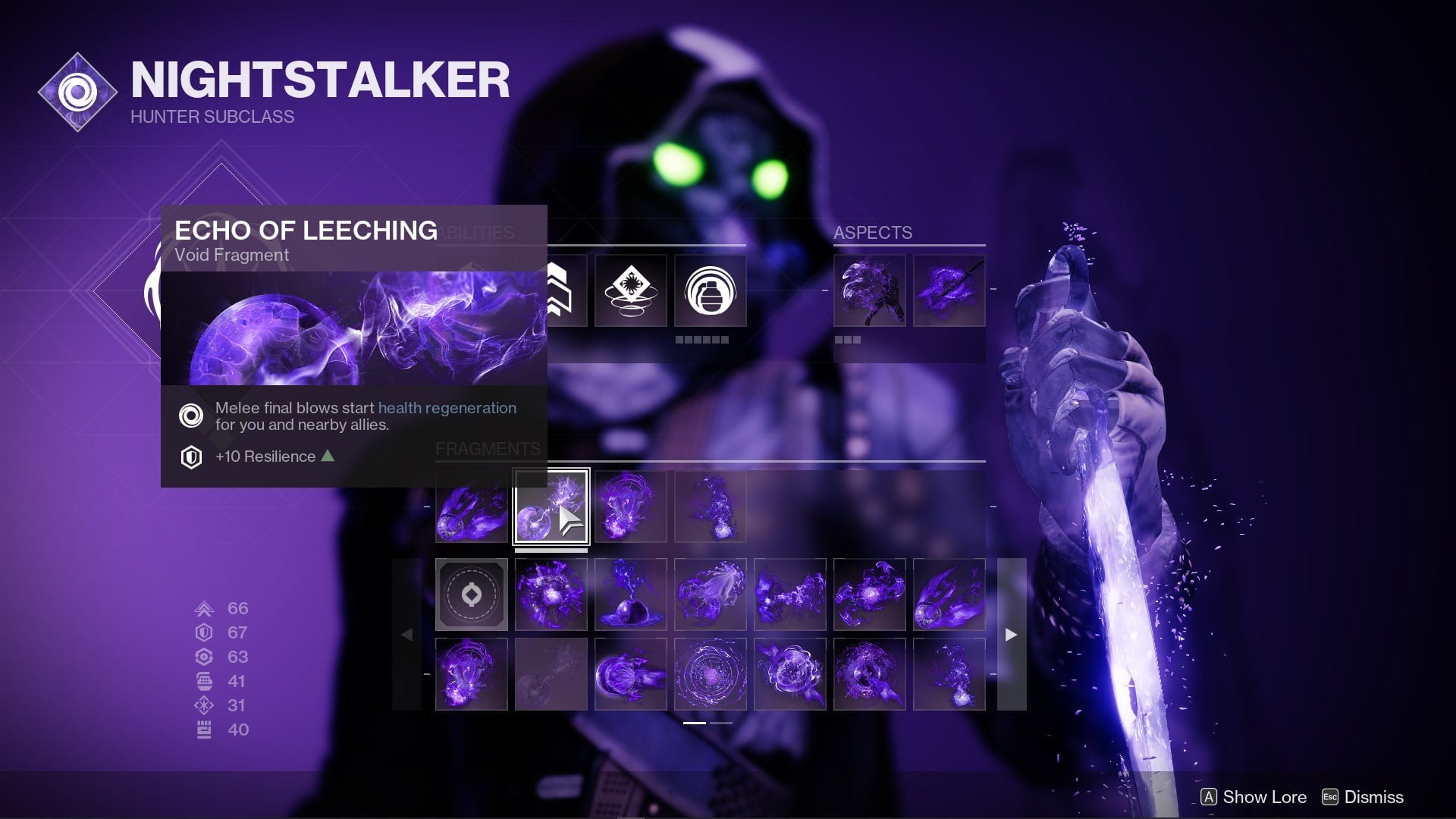 Echo of Persistence is expected, being able to be invisible for longer just means less time is needed before you can marksman’s dodge into another round of invisibility. 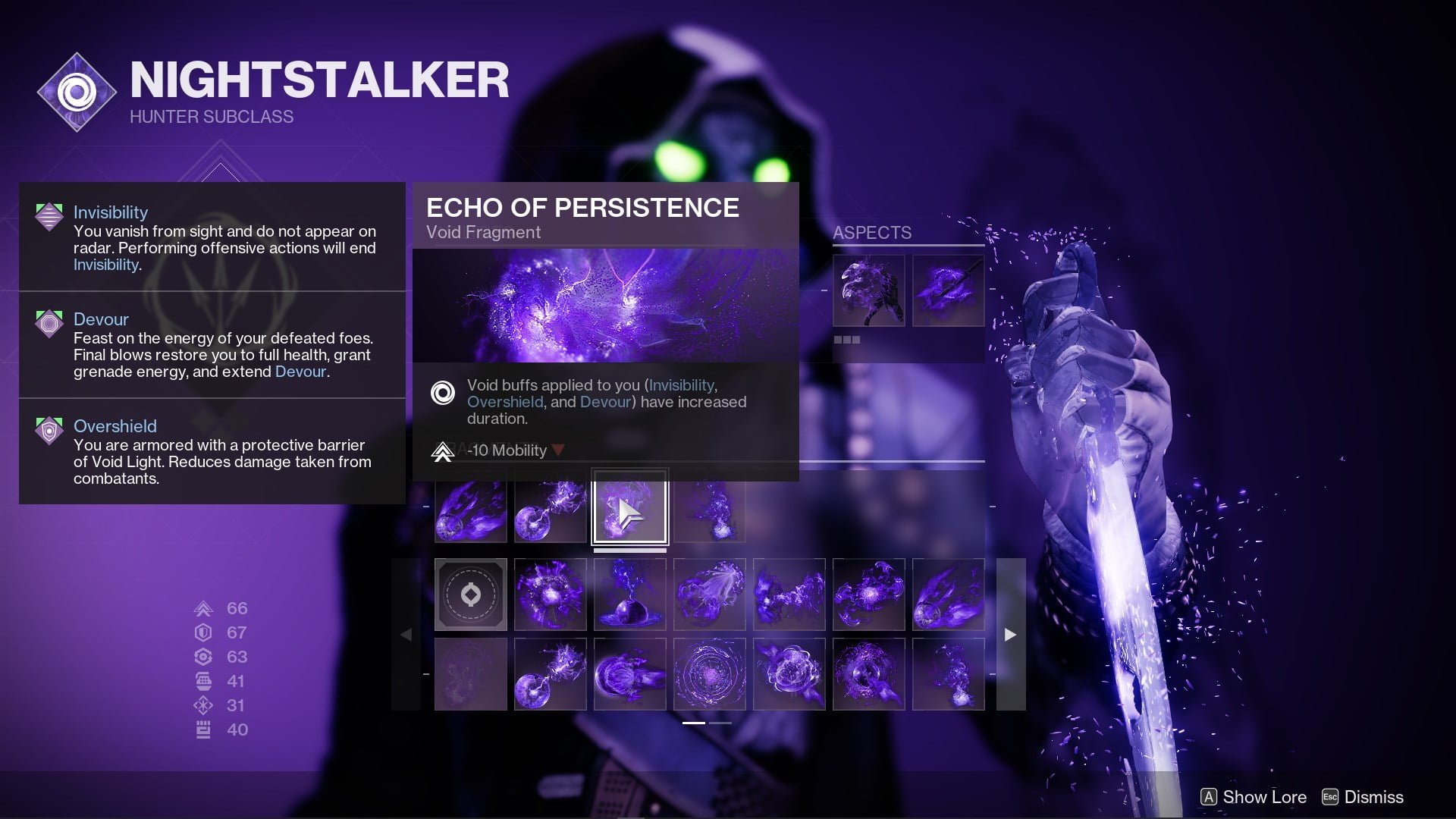 Echo of Obscurity is on here because you are going to be up close and personal with the enemies in this build, and with this Fragment you can guarantee you can go invisible any time you need that Get Out Of Combat Free™ card. 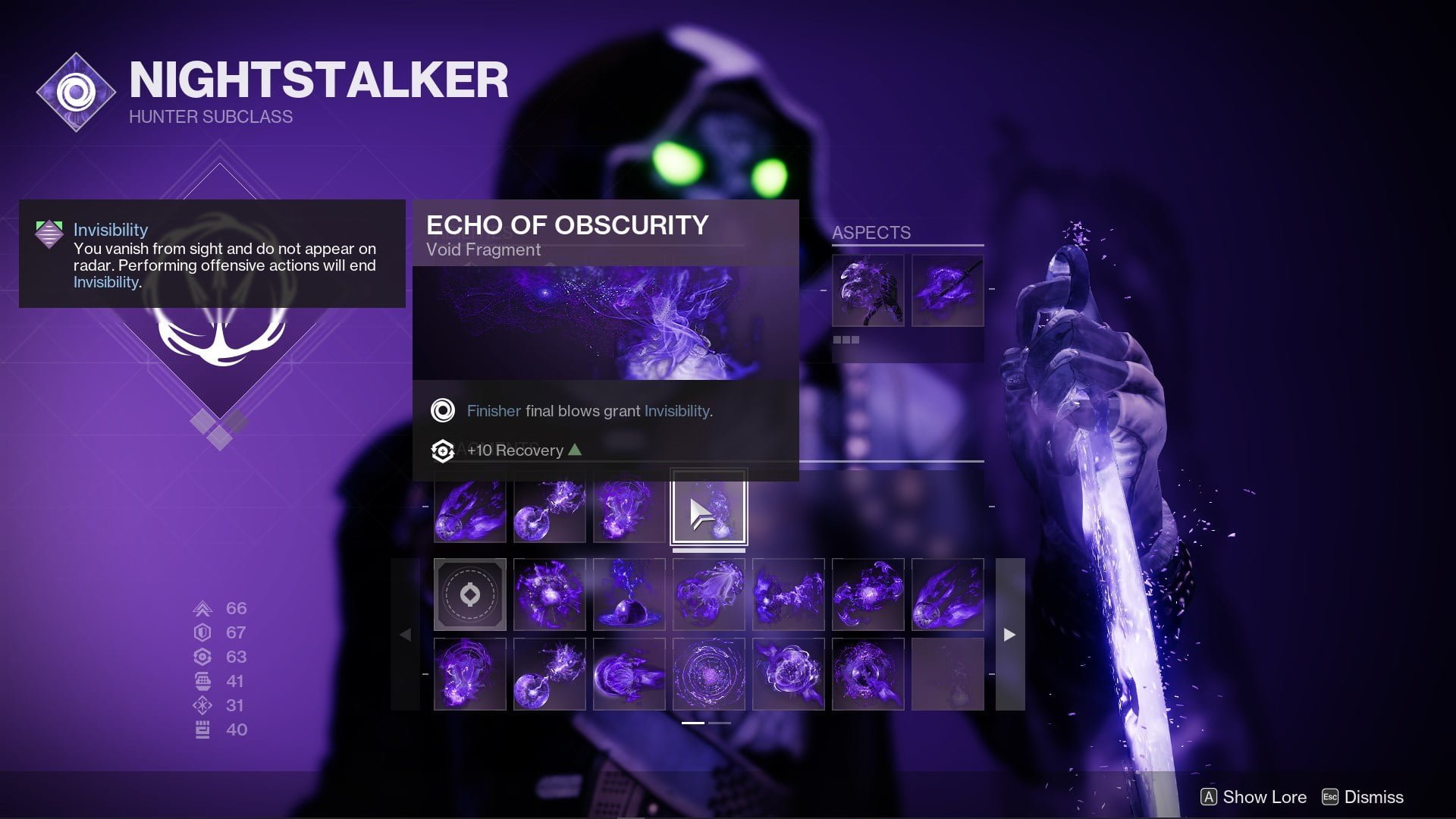 The Lunulata-4B is the most reliable primary for this build, a fast DT primary bow that is able to bang out adds in a single shot, as well as do considerable DPS to Majors, this weapon is best paired with the Golden Tricorn perk and the Major Spec weapon mod. 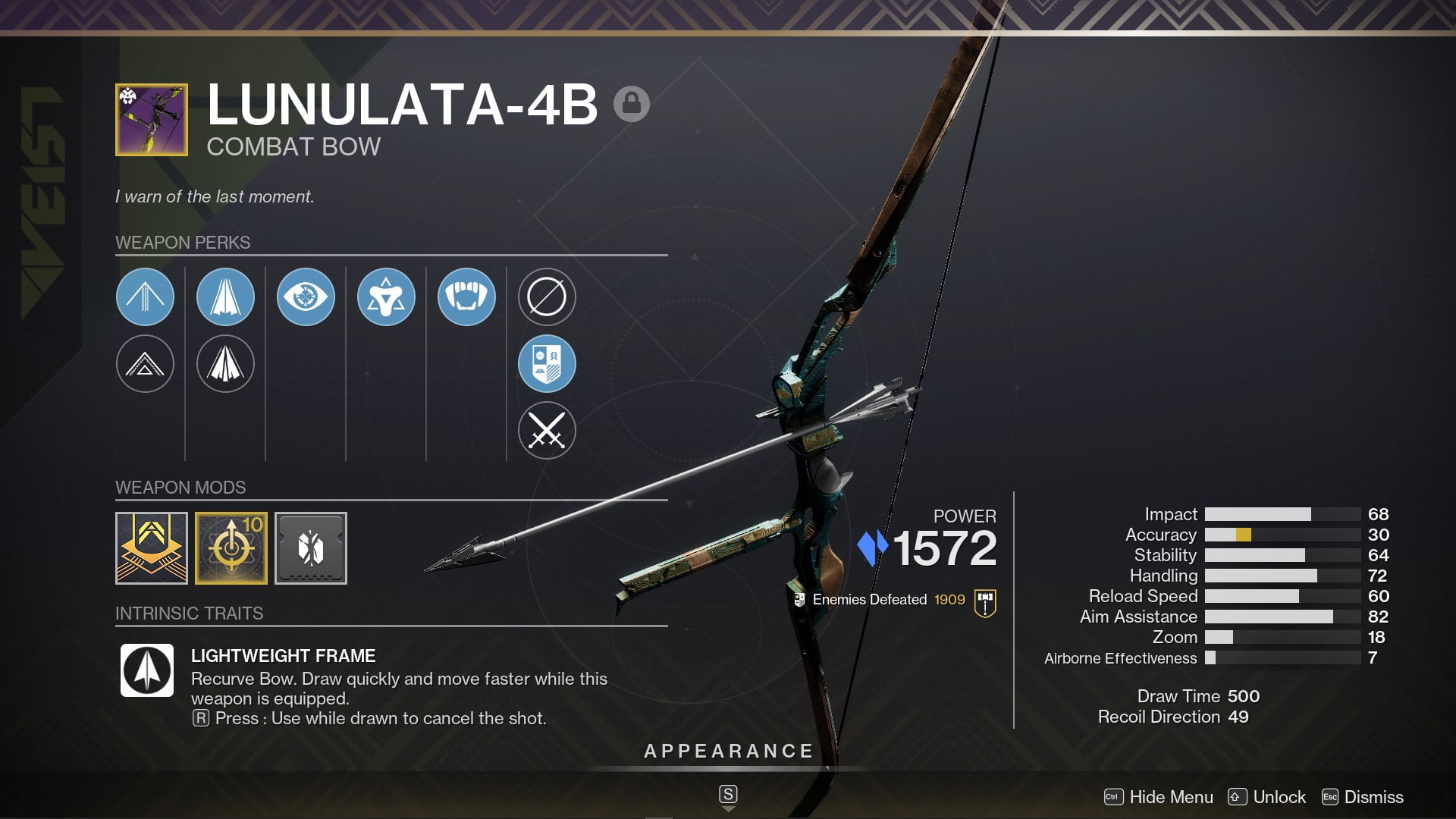 The Enigma is probably the weapon that pulls this entire build together like candles on a birthday cake. This thing packs a mean punch to any enemy, especially if paired with the Major Spec mod. The build for this Glaive is the most important thing, and will need to be achieved through leveling, but it is 100% worth the effort. Enhanced Impulse Amplifier is the first perk you want in this bad boy. Faster reloading and faster projectile speed is like two great perks in one, the projectile speed upgrade is noticeable, and allows for easier use of the Glaive by not needing to lead your ranged targets as much. Second perk is Enhanced Rampage, which should be criminal to have on this weapon. Kills with this weapon are easily achieved, and being able to boost your damage to a stack of 3 is an amazing pair with the rest of this class. Psychohack is the last perk on this weapon, and is a great addition to this weapon seeing as you will be stabbing everything in a 10 foot radius, weakening Majors with this weapon is easy, especially when paired with the grenade. This weapon also packs a major punch with the increased speed projectile, that you can easily hit mid-range enemies with ease. 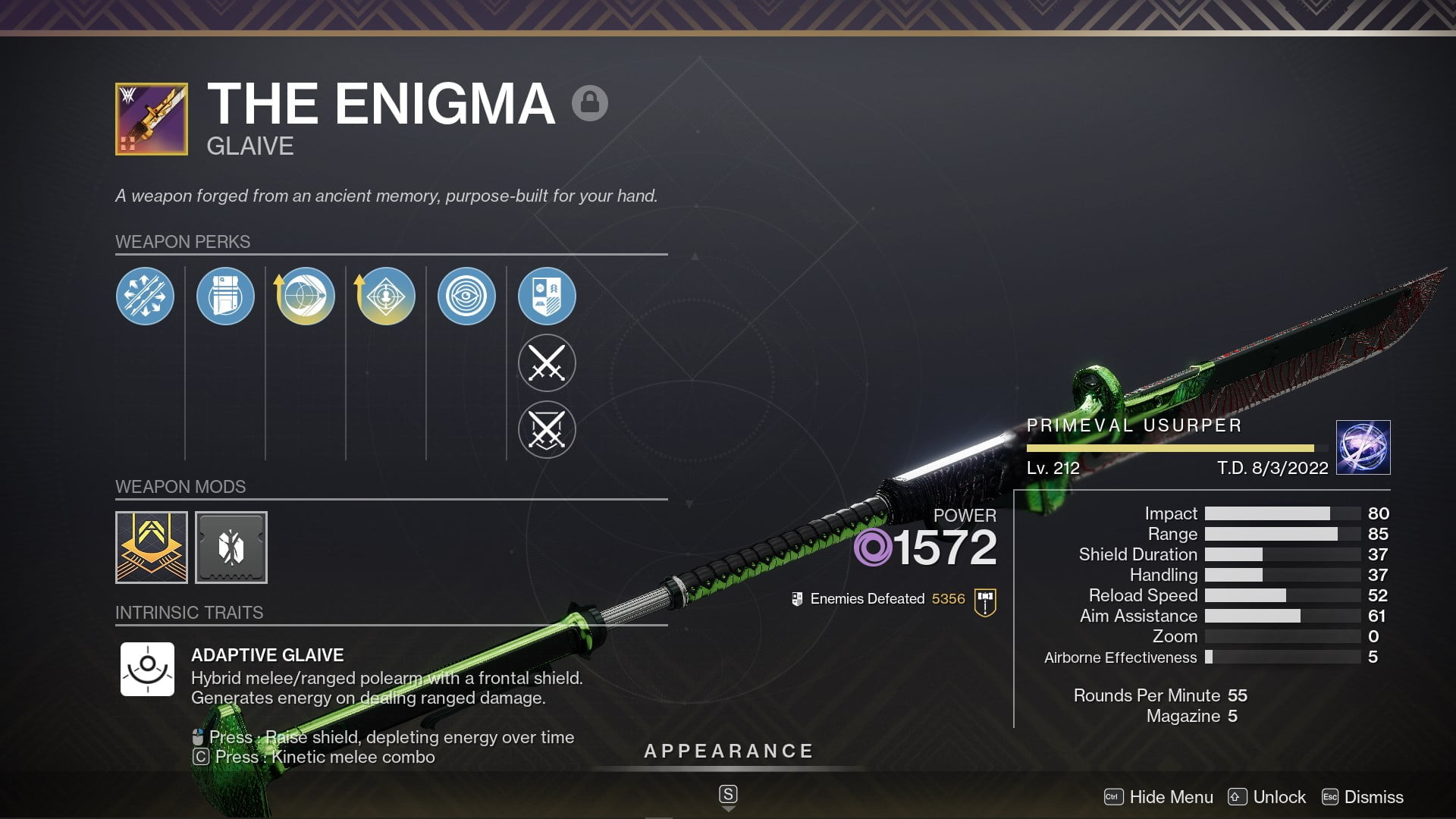 The Parasite is something I pair personally with this class due to the substantial amount of kills you will be racking up easily with this build. Stacking up to 20x, the Intrinsic Trait of this weapon gives you more DPS than the Gjallarhorn when maxed out, and can easily be reloaded with the Marksman’s Dodge if you want to slap on that extra grenade explosion in a bosses face. 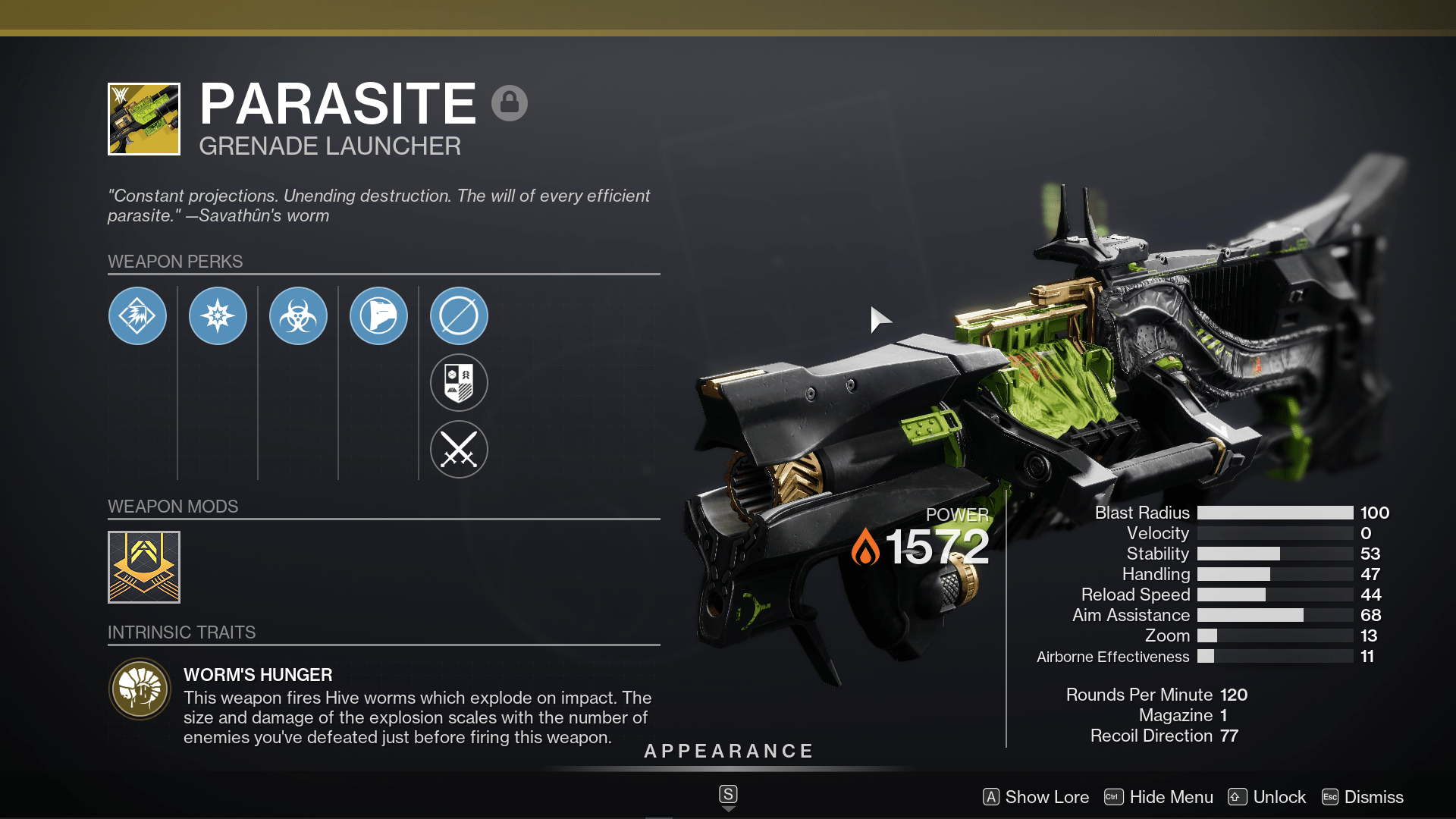 This build is a Guerilla Warfare build, meant to let you hit incredibly hard, and then be able to slip into the shadows. Slaughtering 20 adds just to dodge into invisibility and pop a max Parasite worm on any group of adds or yellow bar enemy in a 50 foot radius should be downright illegal. The bow is for cherry picking far range enemies or hitting big ticks on any Major or Ultra. The Enigma is for chainsawing through adds juggernaut-style, and the Parasite is to bust that sweet release of insane DMG on any unsuspecting group of individuals.

The Enigma, paired with the Echo of Leeching, is a mind blowing combination, it allows you to swing your Glaive to your heart’s content, and if things get too hairy you can easily Marksman’s Dodge out of there and go invisible for an extended period of time, just to dive right back in after tossing a Suppression Grenade.

That is all for this guide, if you have any questions or would like further clarification leave it in a comment please! I hope you all have fun trying out this build!