This is a collection of useful things I’ve learned and figured out since I started playing the game on release. A lot of this stuff comes from me messing up a dozen runs and restarting.

Standing orders is a tab you will find in the labor menu. It contains a lot of VERY useful options to toggle on for your dwarves, such as automation of certain workshops, whether or not your dwarves should haul or ignore certain things in the world, how to behave during sieges, and what tasks children perform. Most of the stuff is self explanatory and you may set at your own convenience, but I recommend two things:

In automated workshops, turn off automatic web collection. If you’ve ever noticed that the second you breach a cavern your dwarves start running around in there before its safe, this is likely why. 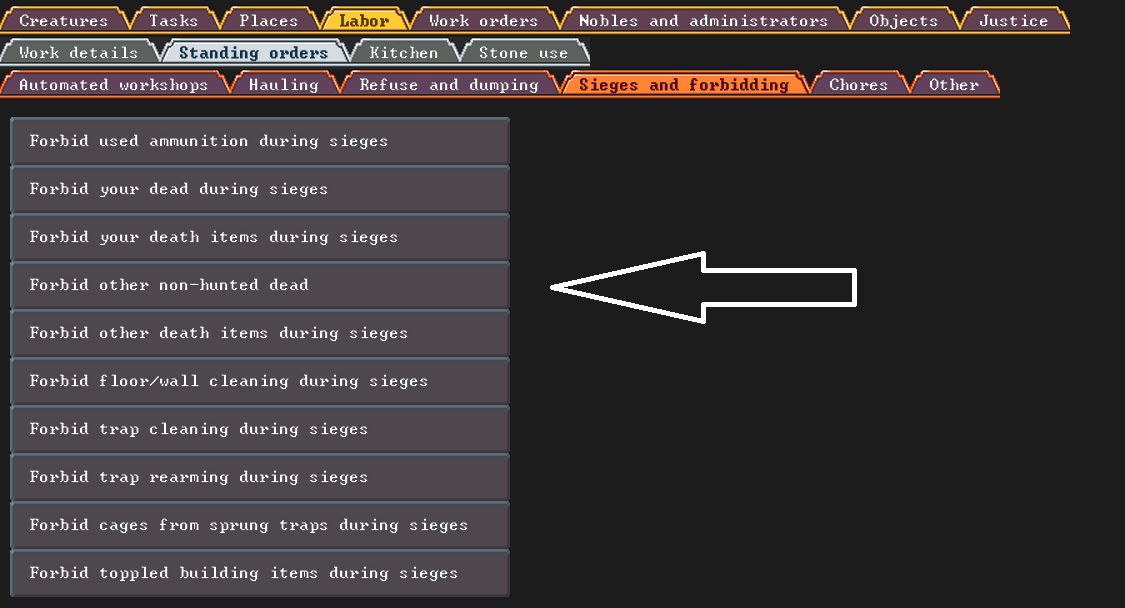 Under sieges and forbidding you will see an ‘Other Dead’ option. Setting it to forbid other non-hunted dead will make it so your dwarves only collect friendly corpses, or corpses of the animals you hunt. This is a good way to prevent your dwarves from rounding up every dead body a monster slayer leaves behind in your cavern. You can now simply hit i and then f to re-allow corpses that you want hauled (such as those generating miasma in a bad spot).

Getting your stockpiles and workshops to work well together can be a real pain. In my first few fortresses my stockpile ballooned to a massive size and was constantly filling to the brim. My dwarves would have to run across the entire thing to get one item all the way at the back, and it was horrible. So here are some things I figured out to help make life easier.

Multiple z-level workshops. You can put stairs in your main stockpile and have your workshops above or below that. Your dwarves should now have to travel less to pick up and deposit goods. You will have to edit your stockpiles and erase the square where you want your stairs, otherwise your won’t be able to mine the stairs out in the first place. 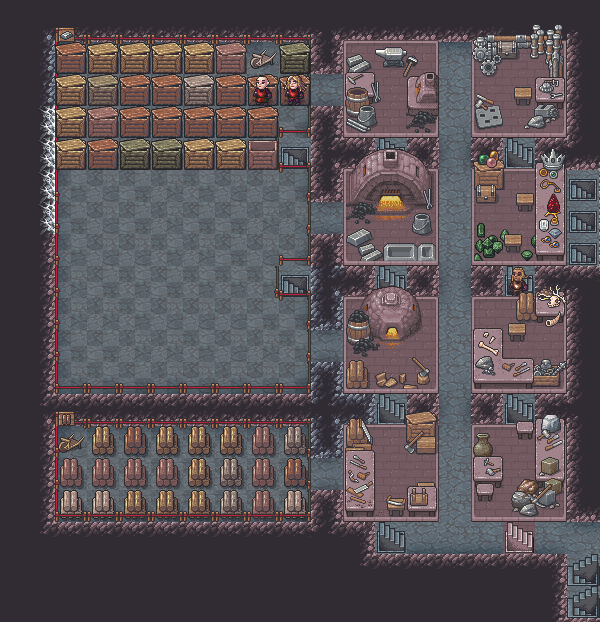 Set up multiple stockpiles so that your dwarves can have a direct line from your workshops. Having a general stockpile is good, but having smaller, custom stockpiles for workshops can make things way easier. I do this with my smiting industry and carpentry, as you can see with my wood stockpile.

Use storage items like bins, barrels, and bags. I didn’t know this starting out, but you can store a lot of different items in bins. Barrels and bags are useful too (you need them for brewing and making dye of course) but bins can hold weapons, armor, crafts, gems, metal bars, and so on. Do you see my stockpile full of crates next to my smith? I have over 300 coke and over 100 metal bars in there, all condensed into a very small stockpile now. Additionally, when it comes time to trade, you can simply have your dwarves move an entire bin of goods to a depot, which condenses many hauling tasks down to one!

In the original dwarf fortress there was apparently something called ‘civilian alerts’ which you could use to tell your dwarves to run for cover in the event of a danger to the fort, it ain’t in the steam version for whatever reason, so there is an issue with dwarves walking straight into a Werepanda and getting themselves killed. Burrows don’t really work well for this either, because your dwarves will not rush to an emergency type burrow you set up.

To quickly get your dwarves to safety you can make a new military squad, add your dwarves who are in danger but too stupid to take cover, and issue an order for them to get out of there ASAP. Either form a squad out of the dwarves you know will frequently be on the surface, or find the ones who currently are and quickly throw them in a squad.

The order to move is the Green arrow on the bottom. Be advised that the move order also has your squad attack any hostiles near it. I am not sure entirely how squad behavior works yet and if they will attack anything near them, or just anything near where you order them to go, so try and get your dumb dwarves into a squad and into the fort before any threats get too close to avoid having them try and fight.

Make sure you have doors or hatches on the entrance to your fortress. Get your dwarves inside and, select the door, and click forbid passage and this will stop your dwarves form being able to use the doors, as well as a lot of different enemies (this is a good way to stop troglodytes from coming into your base, as they can open up doors that aren’t locked).

Some enemies, like wereanimals can destroy doors, so watch out! In this case you will want to use a drawbridge. When a drawbridge is raised, it becomes a wall in the game logic. This is an effective way of dealing with wereanimals in particular, as once the full moon passes, they will transform back into their normal state and no longer be a threat, meaning you can easily wait it out.