In this guide I will give you advice and instructions to complete every single achievement in Enderal: Forgotten Stories.

For now, this guide is only an achievement list. This will become a full-blown guide during the next days and weeks.

But enough blabber, enjoy the Achievement hunt and even when you only want that 100% – enjoy the story! Trust me, it is worth it.

Burnt Flesh
You relived your nightmare.

Start the game and be a nice kid.

Nimble Feet
You proved yourself both dextrous and athletic by tricking the Starling lock mechanism on your first try.

THIS ACHIEVEMENT IS MISSABLE!
During the main quest “The Void”, when you explore Yero’s Cellar together with Jespar, make a save, you need to open the Starling lock first try. Start on the top, left of the glowing light from outside. Activate it, sprint to the top gate hole, then the other one right of you. Drop down backwards and quickly activate the two holes. If you mess up, reload.

Bounty quests can be found at Noticeboards in the major settlements. Do one quest, get the reward, rinse and repeat. Riverville has 3 quests, Ark has 9 quests. (According to Wiki, need to verify)

Slayer of Beasts
You found and slayed all mythical beasts.

The beasts can be found thanks to specific books, which open a new quest for you. You can find them in the wilderness, or just buy all of them in Riverville, Kurro’s General Store.

Myths and Legends I: The Blind Miner
Location:

Myths and Legends II: Arveldhiin the Wanderer
Location: “Deep down, in Dark Valley”

Myths and Legends III: The Ash Widow
Location: Sun Coast, Castle Goldenford
First, get the “Claw of the Dal’Gorek” in the Museum of Ark, South Quarter. You need to pick a master lock (Scroll of Ondusi’s Key Master sold at Goldensickle Warehouse). Then you can defeat her. 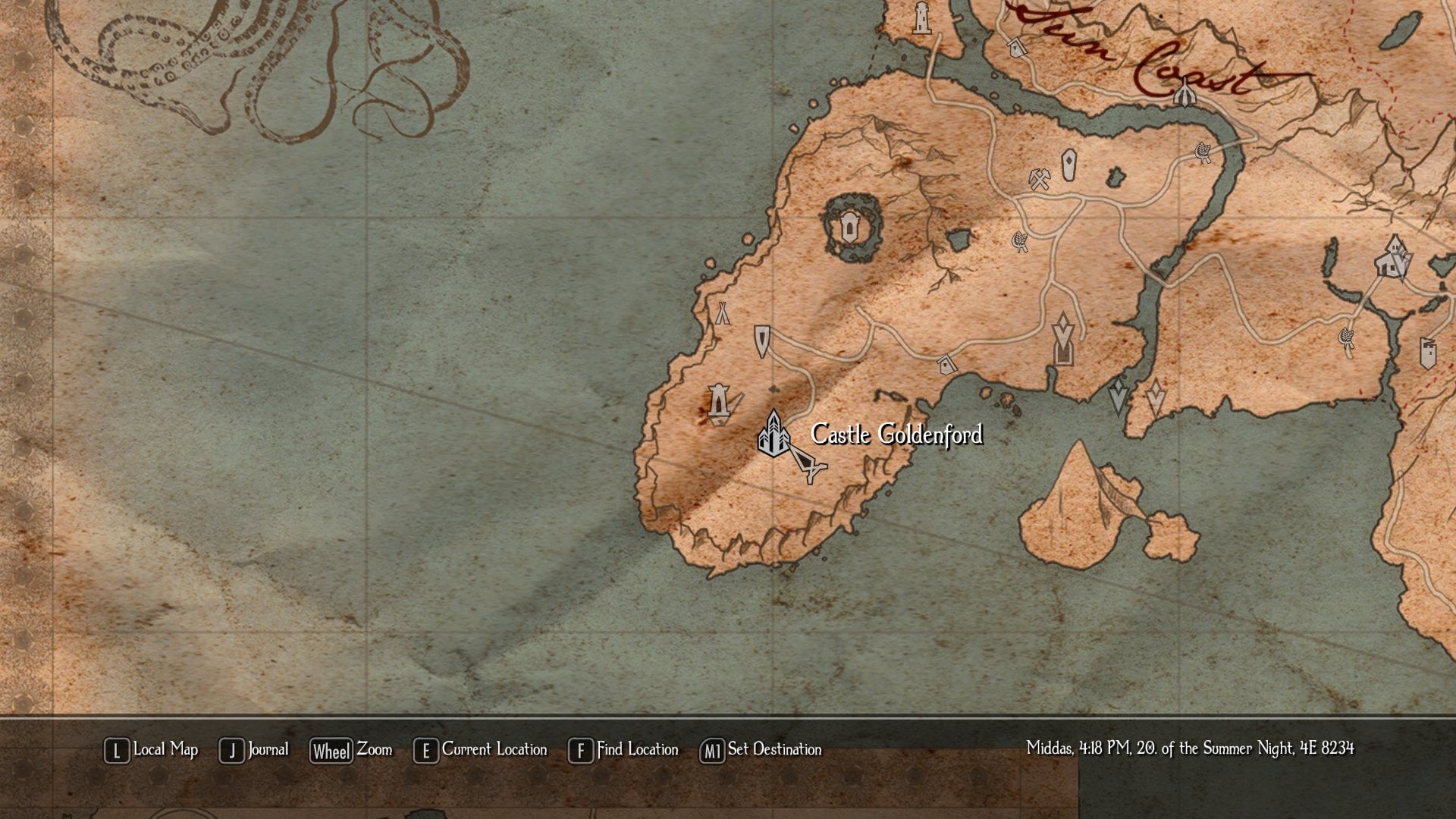 The Queen of the Forsaken
You opened Vatyra’s treasure chamber.

You need to find 9 lost fragments, scattered all over Vyn.

Left Horn: Riverville, Abandoned House (west part, crawl through the broken chimney at the side)

Once you have collected all of them, you need to bring them to Ark, Crypt and insert them, to open Vatyra’s treasure chamber.

THIS ACHIEVEMENT IS MISSABLE!
During the Quest “Bad Vibrations” (given by Tarhutie, the crazy old alchemist lady in Riverville) she asks you to return a potion for her. Get the potion and before you talk to her, save! Now give her the potion and she will give you a skull. Take this skull to Ancient Circle of the Lost Ones at night and interact with the centre stone. This ritual will earn you the achievement, 2 Learning Points and 75 EP. If you rather want 3 Rhetoric AND 4 Life Points, you can now reload the save and drink the potion. She will still give a few pennies, at least. 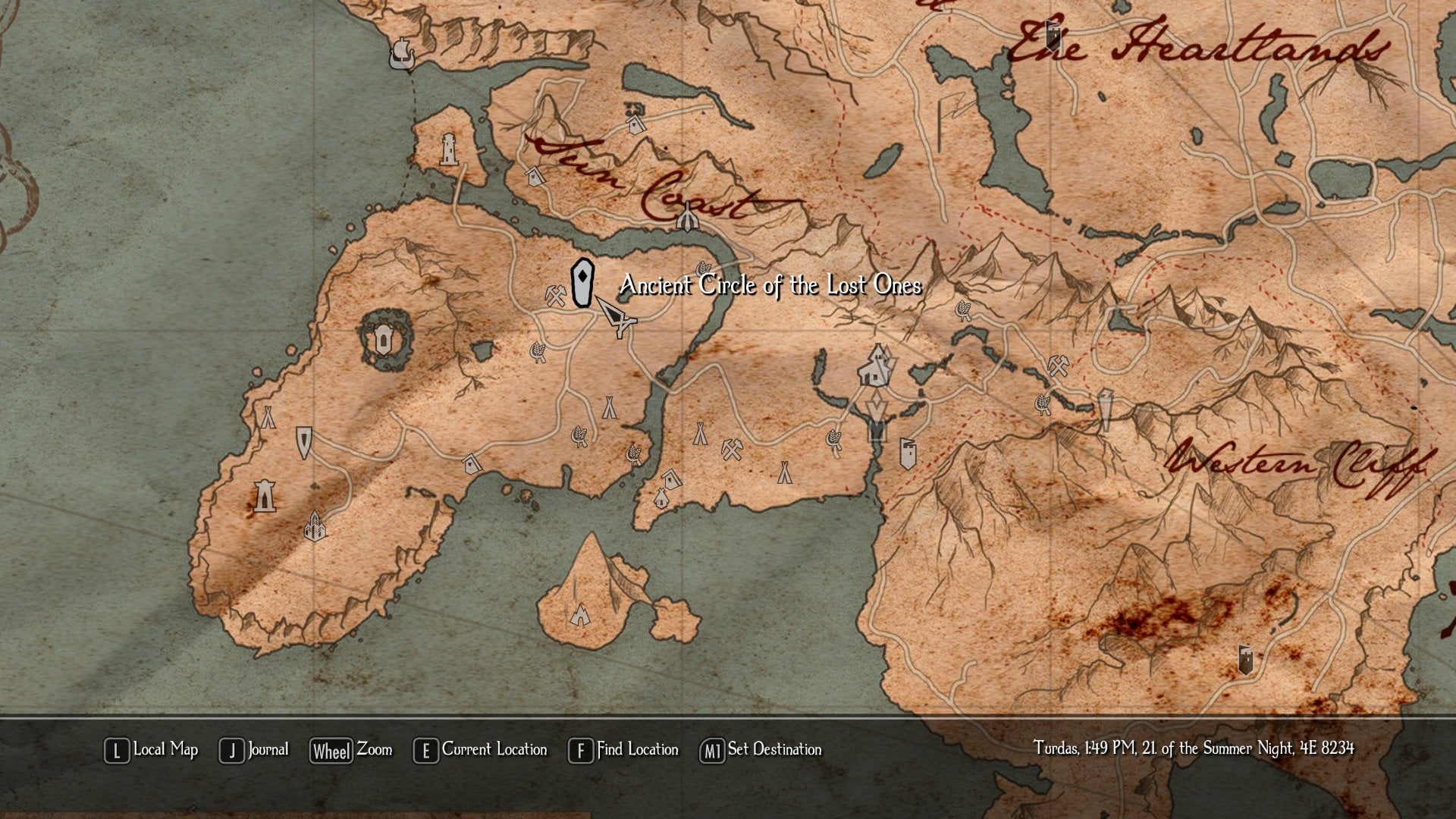 Behind the Horizon
You discovered 50 different locations.

You need a pickaxe, which can be found right at the beginning of the game, next to an iron ore vein. They are quite visible, bring torches or light spells for darker areas.

Rhetorics is a skill, comparable to Persuasion / Speech in other RPGs. You can level it up by using Crafting Books, found in the wilderness or sold by merchants. Persuade 15 times.

Well-equipped
You acquired and wore a complete set.

There are 11 armor sets which can be found while exploring. Collect a whole set and wear it. Every set-piece has multiple spawn points, so you should stumble across a whole set at some point. If you just want the quick achievement, here an example for you:

Synergetic
You discovered a synergy between two talents.

Every time you level up, you gain one memory point. You can use them in your meditation chamber to climb up the “skill trees”. Some of them have hidden synergies if you use two talents in a way that they directly influence each other.
Examples: Shadowtongue Oil Bottle + Fire Arrow

Legendary
You combined two synergetic classes and unlocked an affinity.

Mythical
You unlocked a second affinity!

Disciplines (the differently named “skill trees”) can have specific affinities, if you choose the right combinations. You need to be Level 19+ and the two disciplines with the highest Memory Points and having a minimum of 10 invested Memory Points are considered. These affinities form a special class, giving you new bonuses. According to the wiki you can only have one Affinity active at a time, so either target your preferred affinity second or save before unlocking it, and reload after you got the achievement. 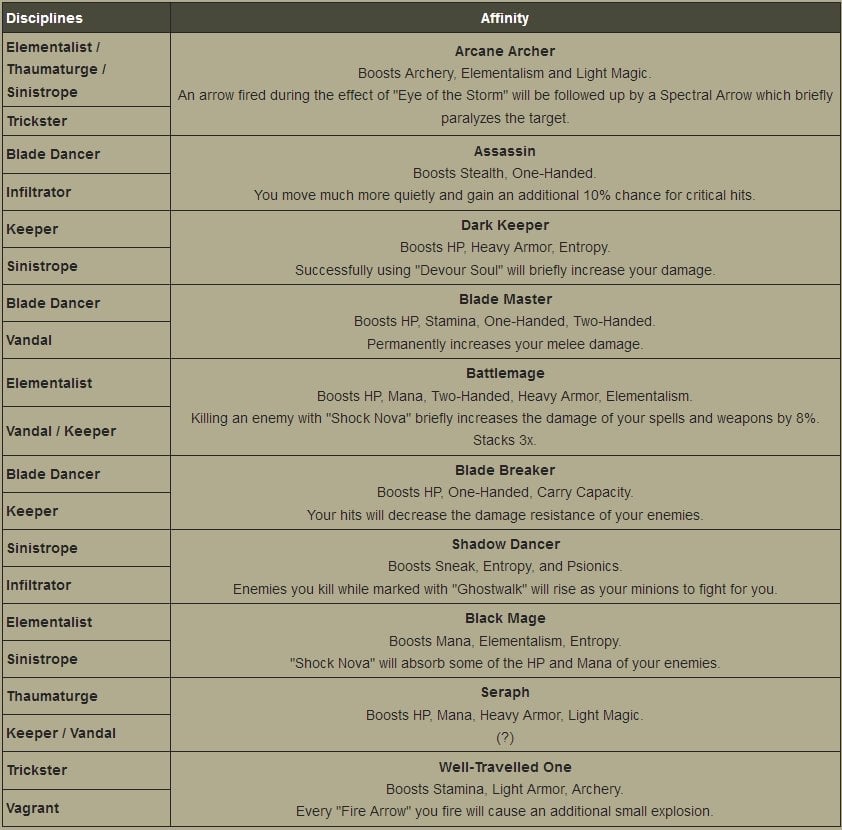 Claws
You brewed and drank your first Wolf’s Blood potion.

For this achievement you need one Memory Point. Unlock the talent Lycanthrope: Wolf Blood. Now find a recipe or experiment with many alchemy ingredients until you have a potion called Wolf Blood. Drink the potion, transform to a werewolf. You can reload afterwards, of course.

Use healing spells or healing potions until your Arcane Fever hit 100%. You die. Well done!

Lyrical Outpours and Other Bodily Fluids
You read an analysis of Prince Mith’s poetry. And got educated.

The achievement unlocked by reading the book “Lyrical Gushes and other Fluids: A Guide to Prince Mith’s Poems”. Found the book in Riverville, The Drunken Bee.

Philistine
You engaged in a profound discussion about art and poetry with Prince Mith.

Find the “Prince” in Ark, the northern Nobles Quarter. Exchange poetry with him and agree to his opinions. Not sure if this was possible because of high rhetoric or because I already read the book about poetry for the above achievement.

We’re Sorry
You suffered through Enderal’s rendition of the arrow to the knee joke. You knew this was coming.

When on foot between Riverville and Ark, you will find this after the Miner Cabin, in a book next to a corpse, leaning on a cart.

Crunchy Pleasures
You tasted a slice of Marita Rotang’s fresh, tasty breeeeeeeeeeead. It was divine.

You find Marita Rotang in Ark, Foreign Quarter. Buy her “Sublime Breead” and eat it. Pop.

In taverns you can find gambling tables. At night, you can find other gamblers to play with. Sit down and play with them. The rules are quite easy, it is a dice variant of Blackjack. The first two dice control the maximum number of points you are allowed to reach without busting. Just save and reload if you get unlucky.

Card Shark
You won 10 rounds of “Battle for Treomar.”

In taverns you can find gambling tables. At night, you can find other gamblers to play with. Sit down and play with them. You and your oppent draw 3 cards, the total of the numbers are your strength. You can use dice to gain more strength, but you also lose some pennies this way. It’s pretty random, so save-scumming is the way.

Nifty
Thanks to your sleight of hand, you found a big hidden slot in a chest.

BROKEN AT THE MOMENT (Fixed next patch)
When you unlock a chest, your Sleght of Hand skill gives you a higher chance of finding small, medium or big hidden stashes as a bonus. To find big stashes, you need a minimum of 75 Sleight of Hand.

Knowledge Is Power
You found and earned all knowledge points.

The Treasures of the Destitute
You found all hidden stashes in the orphanage.

Chronicles of Blood
You found and read all books of the Butcher.

Master of Eggs
You actually hunted down all eggs for Kurmai. Hats off.

Hidden Powers
You found and read a hidden talent book.

Catch ’em All
You found all souls.

For now, uncategorized, without comments, just the whole list of all the achievements:

Protector
You became a Protector.

Home, Sweet Home
You bought yourself a home in Ark.

The Spectral Horde
You bound a lost soul into a Phasmalist’s trinket.

Proficient
You mastered a memory tree.

Thorough
You collected 15 butterflies for Rynéus.

The Grove
Listened to the story of Silvergrove.

Master of the Arcane
You learned a mythical spell.

Yes, We Got Them Too
You defeated Enderal’s only dragon.

Whirlwind
You became friends with Whirlwind, the Donkey.

Icy Embrace
You froze and shattered an enemy.

Vanquisher of Horst
You neutralized Pathira, who took control of Yerai’s centurion.

Wings
You flew on a Myrad’s back for twenty times.

Mammon
You accumulated 100,000 Endralean penny coins and entrusted them to Samael Silren. Are you sure about this?

Reach for the Stars
You climbed Enderal’s highest mountain. Congratulations!

These achievements, being hidden, will contain spoilers. But you are reading an achievement guide, so you should expect that already.

A Fine Drink
You shared a drink and a good conversation with Lishari Peghast.

A Sliver of Hope
You found the Beacon.

The Scorpion’s Tail
You sided with Dijaam in the conflict about the Scarabeus.

The Price of Sin
You approved of Tharaêl killing Qalian, even though he kept his end of the bargain.

Goodbye, Daddy
You relived the third version of your nightmare.

Invasion
You rebutted the Nehrimese’s attack on Ark.

Rememberance
Esme trusted you enough to reach out to you after the tragedy in Old Ishmartep.

What We Deserve
Found captain Rocio.

He Already Paid the Price
You disapproved of Tharaêl killing Qalian. His life is punishment enough.

Onyx
You found all three of the Black Stones and brought them to Lexil.

Part of Something
You finished Jespar’s companion quest and helped him find his place in Enderal’s struggle.

One Soul
You finished Calia’s companion quest and helped her cope with the entity inside her.

What dreams may come
You convinced Rynéus to disband the illusion of Silvergrove.

What’s reality, anyway?
You unlocked the hidden ending and survived the destruction of the Beacon. Or did you?

The Lion’s Roar
You sided with Maél Dal’Loran in the conflict about the Scarabeus.

Free At Last
You sacrificed yourself to give mankind another chance.

The Black Guardian
You realized that not all myths are just myths.

A Better World
You chose to flee to the Starcity and create a new mankind.

Repentance
You prevented Tharael’s suicide and gave him back hope.

Come On, You Stupid Rod
You found a brave warrior’s frozen corpse in the Frostcliff Mountains. The damn thing just wouldn’t cooperate.

Music of the Lightborn
You constructed the Koppophon.

Näea
You followed Yuslan to his house in the alternate reality and witnessed a conversation between his alter ego, a girl, and Näea.

Sleep, My Child
You convinced Mirell to ease his daughter’s suffering.

Worth It
You and Dijaam escaped and kept the Scarabeus for yourselves.

Finders Keepers
You lied to Maél Dal’Loran about the trinket.