Enderal: Forgotten Stories is a total conversion mod for Skyrim that is set in its own world with its own landscape, lore and story. It offers an immersive open world, all for the player to explore, overhauled skill systems and gameplay mechanics and a dark, psychological storyline with believable characters.

When typing in console commands, remember that commands are not case sensitive, so don’t worry about caps lock.

Toggle clipping on / off.

Sets the player level.
Note: Does not grant commensurate experience.

Spawns item / NPC near player.
(Can be used with AI commands for hilarious effect)

How to Make Money

Stranded on cash? Swimming in Learning Points, but can’t afford to buy those blasted books from grubby merchants? Then you’ve come to the right place! Here’s how you can make easy money completely legit.

If you’ve played Skyrim, you might recall alchemy being a reliable way to make money. Well, same thing applies to Enderal. Even if you don’t invest in alchemy & potion crafting skills, you can still rake in reliable profits very easily.

I’ll save you the hassle of finding out profitable alchemy recipes and tell you where you can grab the ingredients. This is still a work in progress, but I’ve found two easy recipes that’ll get you started.

What you need to get started?

1. In order to get started, you’ll want to reach Ark to unlock the Myrad Tower’s (as transportation option) and the Ark’s marketplace, which contains several ingredient selling merchants.

2. You’ll also want to have some cash (somewhere between 200-400) so that you can buy the said ingredients and that you can travel quickly between Riverville and Ark. For one recipe you’ll wanna make a quick trip to Duneville, there’s a big batch of Baldris Roots right next to Duneville’s Myrad Tower.

3. For one recipe, you’ll wanna farm crabs for their shells and blue butterfly wings. They pose little challenge, so you can fight them with little concern. Just watch out for bandits and wolves when you’re low level.

You’ll find the first alchemy bench in Riverville, alongside with ingredient selling merchants. On your way to Riverville, you may have grabbed several blue butterfly wings and crab shells. Here’s what you can make out of them: 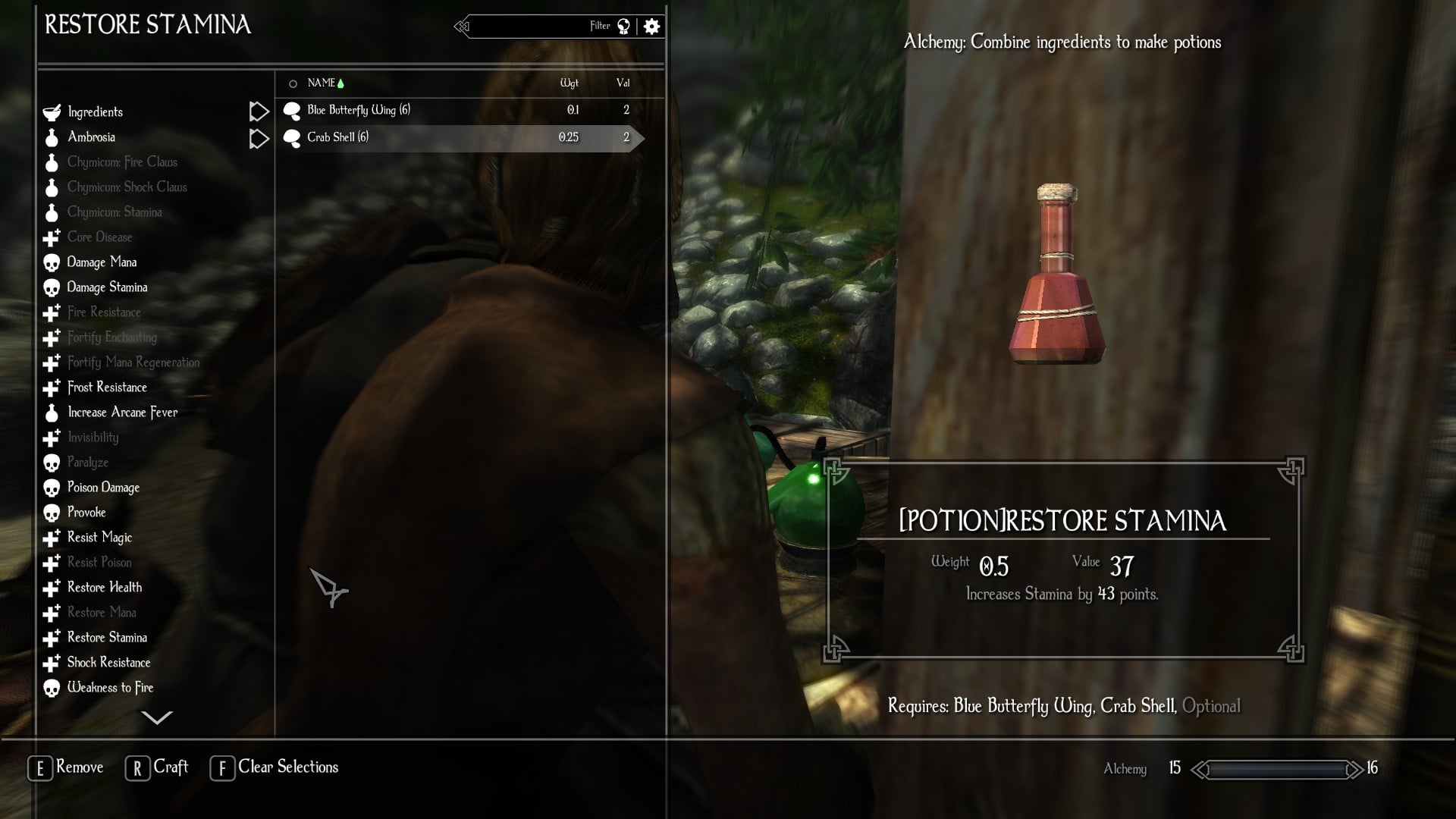 Stamina potions sell for modest amount, considering how easy the ingredients are to obtain. But we can one up those things without having to farm any crabs, all you need is garlic and a pinch of salt. Garlic can be bought on most ingredient merchants, for example the one in Riverville: 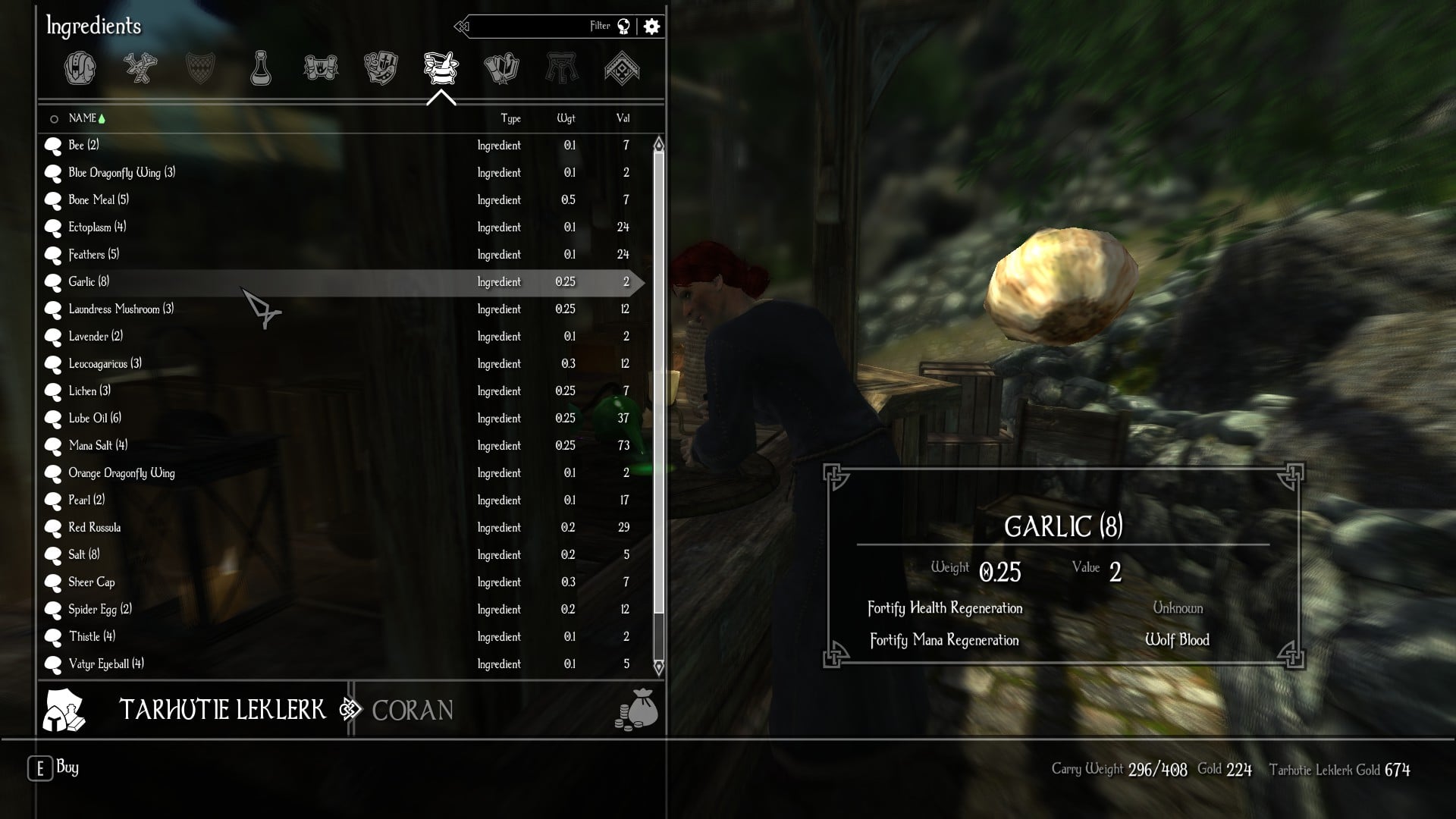 Make a mental note on Leucoagaricus, you can purchase them in Riverville and cash them in when you reach Ark (see next section).

Salt can be brought in big quantities (usually somewhere between 16 and 20) in all inns for cheap price of 5 gold per salt. One garlic + salt costs 7 gold, which can be turned into Fortify Mana Regen potion: 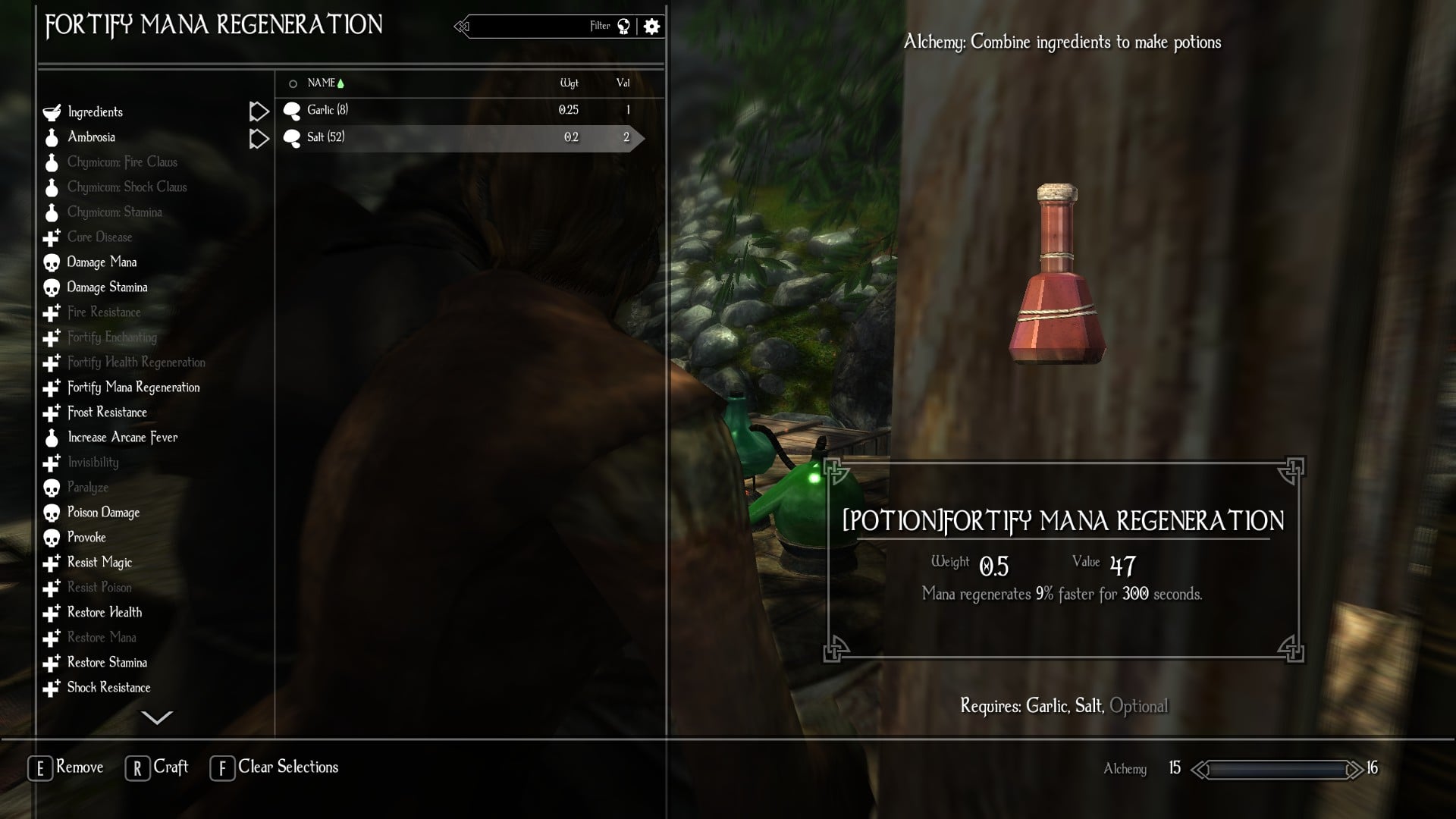 Having no points in Rhetorics, or any bartering price affecting enchantments, we get to sell each Fortify Mana Regen potion for 19 gold -> 12 gold profit per potion: 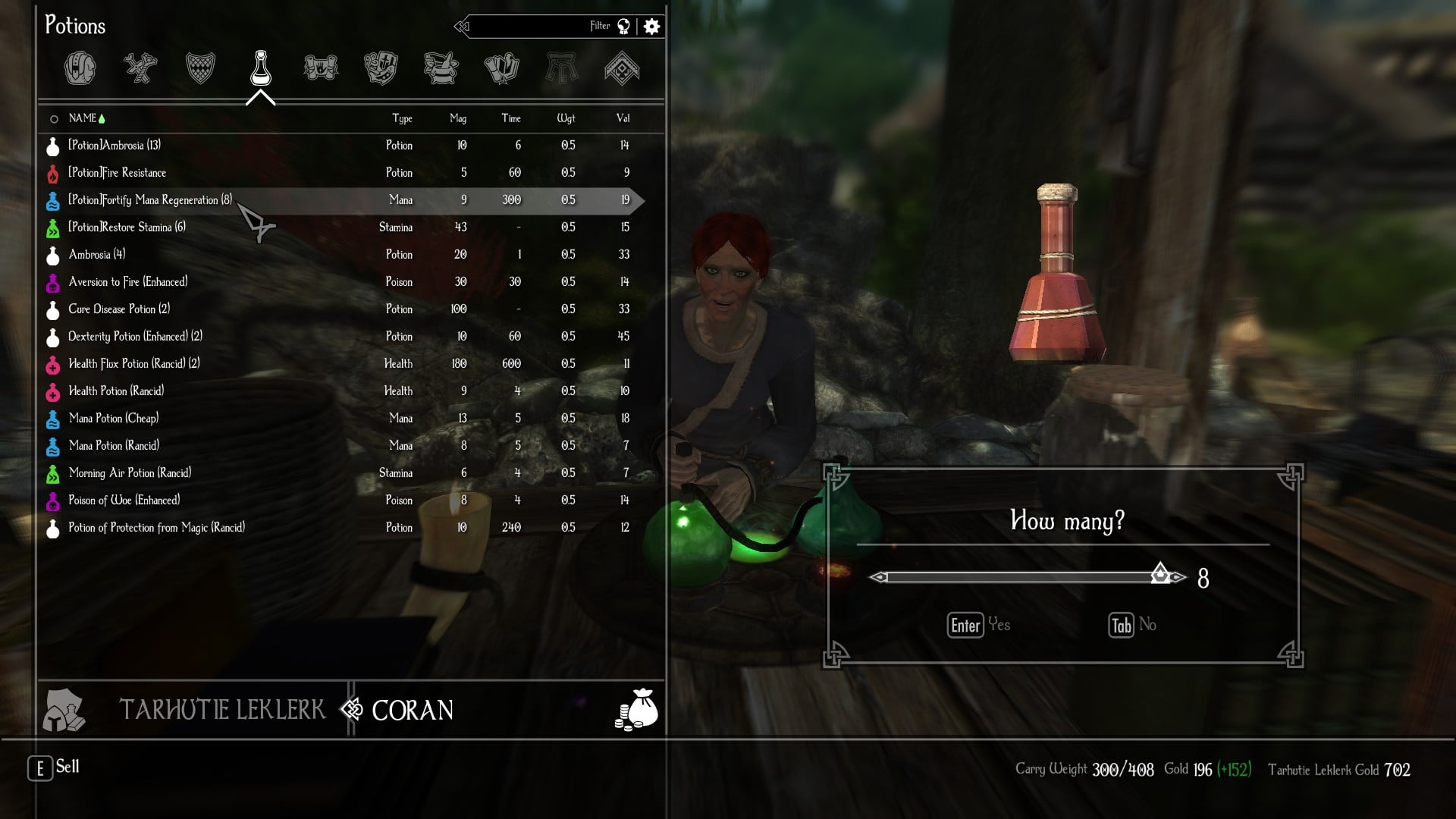 Not too shabby for basically doing nothing, eh?

So far I’ve found an easy & cheap Ambrosia recipe, consisting of Thistle and Peaceweed. You may have found Thistle on Riverville’s potion merchant, but Peaceweed can be found on merchant next to Ark’s marketplace leatherworks shop: 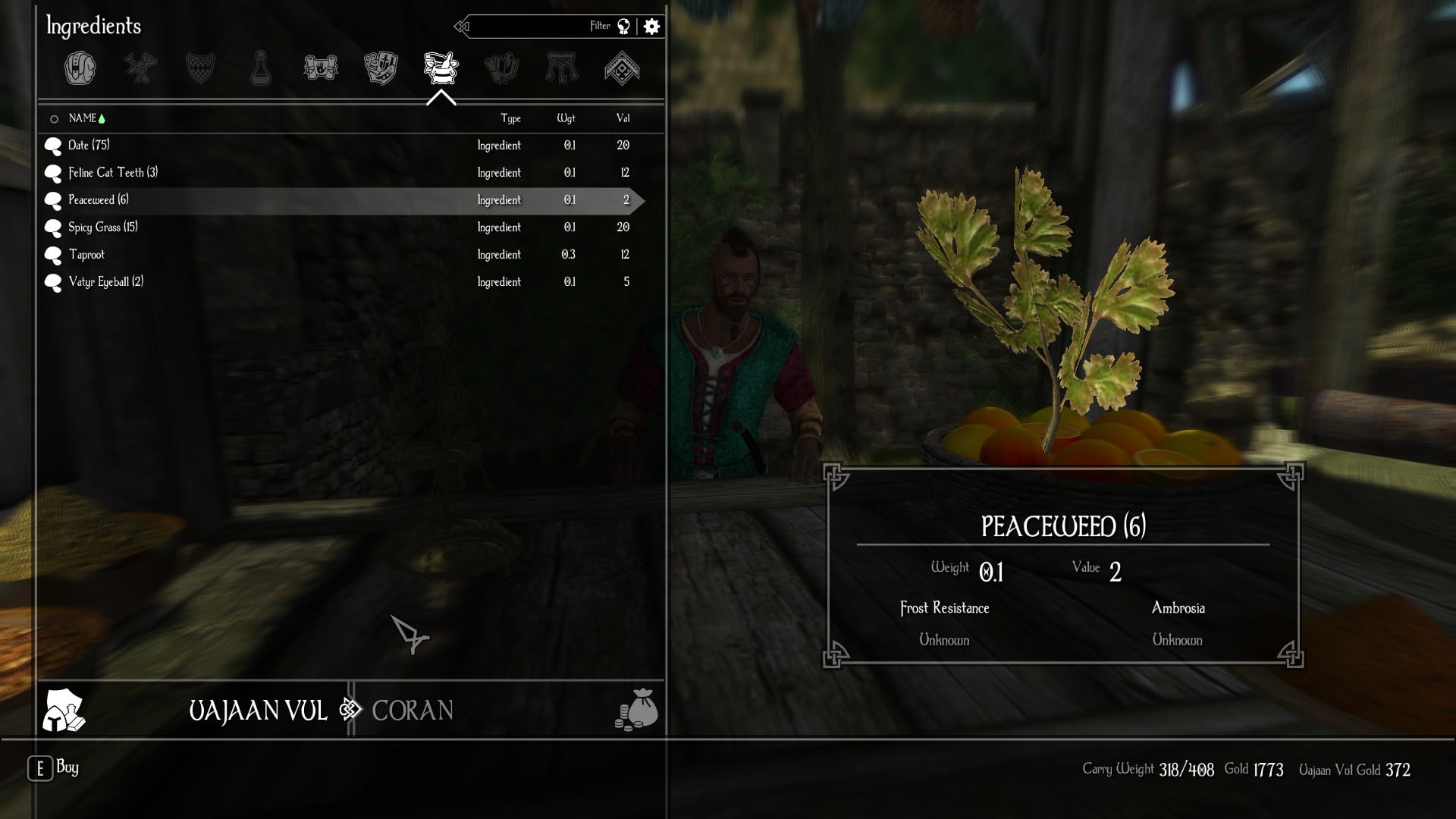 Peaceweed can be combined with Fish Scales to get Fortify Block -potion, which has a value of 51 (slightly higher than Garlic+Salt),

Another component you can use for ambrosia is Baldris Root, which can be found in big quantities near Duneville’s Myrad Tower. I’m not sure if they re-spawn after picking up, but you can grab 35 Baldris Roots from there for mere 50 golds (25 gold per Myrad ride).

Before moving on, take another look at that previous picture. See those big quantities of Dates? They’re expensive, but do yourself and buy them. You can mix them with Leucoagaricus (12 golds a piece) for ludicrously valuable potions that’ll sell for over a 100 Gold per piece without any skill investments: 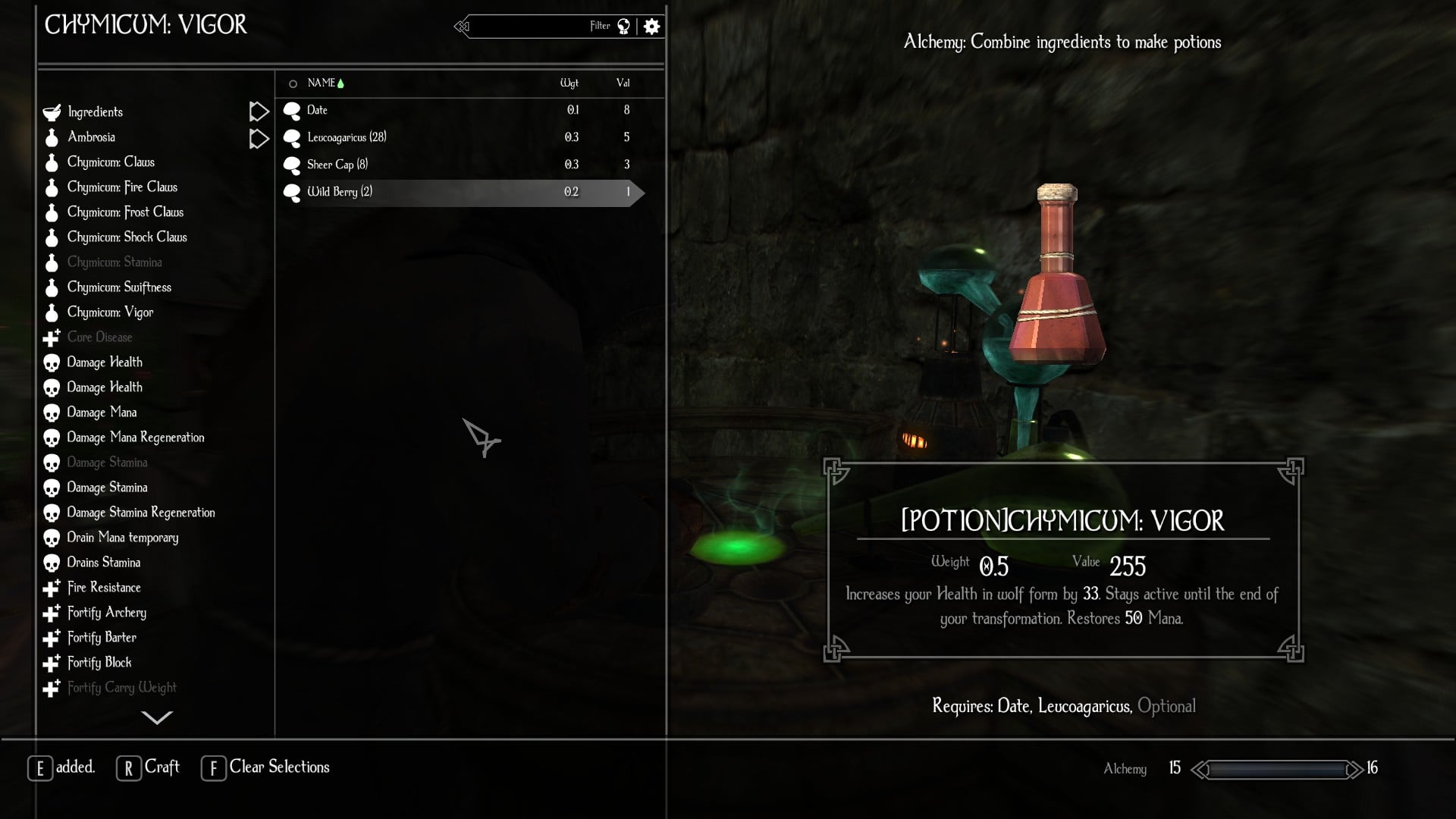 When deducing ingredient costs (100 – 32), we’re getting 68 Gold profit on each potion. Now that’s something!

Tavern gambling is another way to make money. You can profit off of them If you can stomach save scumming. Personally I find potion crafting more fun & consistent way of making money, but you shouldn’t overlook tavern gambling entirely.

Morala’s Dice is a kind-of-blackjack with dices: At the start of the game, two dices are rolled and their sum is tripled to as the score cap which you or your opponent can’t surpass (think of it as Blackjack’s 21). For example, if initial roll turns out 6, the score cap for the game is 18. Whoever rolls closer, wins. If one player rolls the exact number, the “Blackjack’s 21”, that player wins double pot.

Battle of Treomar is much like The Witcher’s card game Gwent. You and your opponent draws three cards which are between 1-10 (1 being the worst, 10 being the best), after which you can choose to throw a pair of dices to add to your total sum. Whoever has higher total sum (from cards and dices), wins the game.

Ark – Money in the Bank!

Once you’ve got the ball rolling, it’s a good idea to open up a bank account.
You’ll need at least 100 Gold in order to open a bank account, but I’d wait until I have 1 000+ Gold so I can make first big deposit right away and still have enough money in the purse for next round of ingredient purchases.

When you’re storing money in the bank, you’ll gain interest from the bank (based on how much you’ve got on bank account). Why would I say no to free money? Getting up to +250 extra Gold per day ain’t nothing to scoff at: 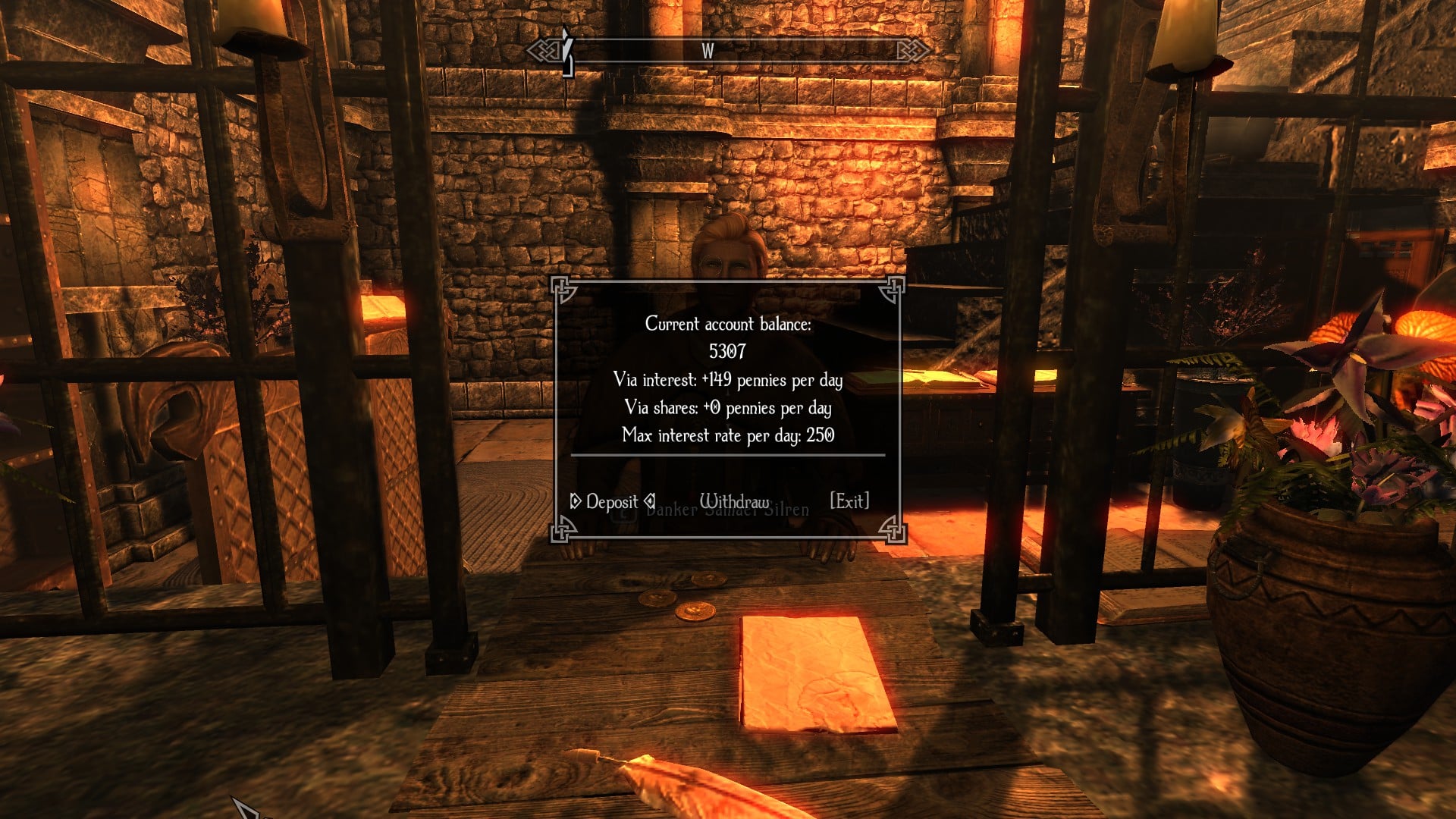 A combined list of all the armour sets, including the new ones added with Forgotten Stories.

So I have yet to see a combined guide that has all the armour sets currently available in Enderal with the recent Steam re-release so I figured here would be a good spot to post the information on all the old and new sets in one spot.

Please note that I have not found all of the sets in-game, so this guide will only cover all the currently attainable sets, as well as their stats, looks, and set bonuses and NOT where to find them as I spawned them via console commands.

Set bonuses are in the tables. Screenshots have the actual stats of the items. Set bonus “I” is from 2 parts, bonus “II” from 3 parts, and bonus “III” from having all 4 parts of a set. Keep in mind that armour and weight values can change depending on perks and points invested into skills, and that all armour parts are in their original conditions and not improved via crafting.

This set is unique as it is one of the two sets that has 5 pieces to it, and another tier of set bonuses which confer permanent stat boosts upon completing the set, as well as providing a special ability.

I – Mana regenerates 8% faster. Increases Magic Resistance by 7%.
II – All spells cost 7% less mana.
III – Increases health and mana by 25.
IV – Does damage equal to regained health to an enemy near you. Increases your primary fight skills by 4 permanently.

Please note that this set has a differently worded bonuses for mana regeneration, and I am unsure what the different (if any) exists between mana recharge percentage bonuses and flat mana recharge point bonuses.

I – Increases stamina by 4, and health by 10.
II – Sneak is 4% more effective, One-Handed attacks do 5% more damage.
III – Pickpocketing is 3% easier, Prices are 3% better, and Mentalism spells cost 3% less mana.

I – Lockpicking is 5% easier.
II – Increases critical hit chance by 7%.
III – You move silently while sneaking.

The other of two sets that has 5 pieces to it, and another tier of set bonuses to match.

I – Increase light armour by 5, increase stamina by 5.
II – Lockpicking and Stealth 5% more effective.
III – Bows and one handed attacks do 5% more damage.

I am unable to aquire the stats for the Vagrant set as attempting to spawn it in via the console does not actually give you the armour. So this section will remain blank as I am unsure if the complete armour is in the game or not.

The set is apparently used in-game by NPCs so presumably it does exist, so I am unsure if it is bugged, attained in a strange manner, or just not usable by the player by design.

I – Increases sleight of hand by 9 points.
II – Increases critical hit chance by 10%.
III – Increases the chance that the perk “Vagabond: High Dexterity” completely intercepts damage from 10% to 20%.

A combined list of all the class combinations, including the new ones added with Forgotten Stories.

So I have yet to see a combined guide that has all the classes currently available in Enderal with the recent Steam re-release so I figured here would be a good spot to post the information on all the old and new class combinations in one spot.

In case you don’t know already, the wiki states that ‘some of the disciplines share special affinities. From level 19+ on, the two disciplines with the highest number of AND a minimum of 10 Memory Points invested into each of their Memory Trees will unlock a special class, granting bonuses to some of your stats and skills, as well as certain special effects. Only one special class can be active at a time, and putting more Memory Points into a third discipline can change the active special class.’

The following classes were included at the launch of the original mod, and cover the combinations of the Rogue, Warrior, and Mage classes.

The following classes were added with the re-release on Steam of Enderal:Forgotten Stories, and include all the combinations with the new Lycanthorpe and Phasmalist classes. It is also worth noting that the Lycanthorpe class combinations have unique looks for each transformation.