Early Warnings quest will task you with finding the missing uplink, repairing it and followed by multiple objectives. This quest will take you through a number of locations including some new ones.

Abbie’s Bunker
Get to the Abbie’s Buner which is located north of the Mire. Enter the back of the room and use the Tinker’s Workbench. Select and “Uplink” and repair it.

Head back to the entry room and use the Scorched Detection System Terminal and select “Communications Uplink Repaired” and then get back to listen to what Abbie has to say.

Exit the bunker and head to Raleigh Clay’s Bunker and use the terminal to unlock the door. Listen to Abbie and you will get your next objective. Open the marked cabinet and all five Fan Cabinets will be there.

Heating Coils
Now you need to acquire a series of Heating Coils from a number of locations. The first one is located in the bunker, just head to the end of the hall and open the toolbox to find the Heating Coil.

Now head to Elle Ame’s Bunker and enter it. Get inside the room to the South and then take the door to the left to find the second Heating Coil.

No Head to Relay Tower LW-B1-22 and get the Heating Coil from the Toolbox on the southeast side of the room. Now get back to Abbie’s Bunker to the Tinker’s Workbench room. Inside the room, check the cupboards to find the last two Heating Coils.

Now use the Tinker’s Workbench ad craft five Upgraded Motors. Now head back to SDS Terminal in the main room and select the “Upgraded Motors” to complete the quest.

Early Warnings is a main quest that is automatically accepted upon completion of The Missing Link at Abbie’s Bunker. 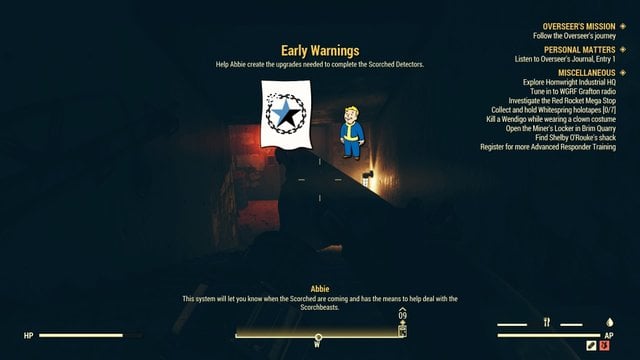 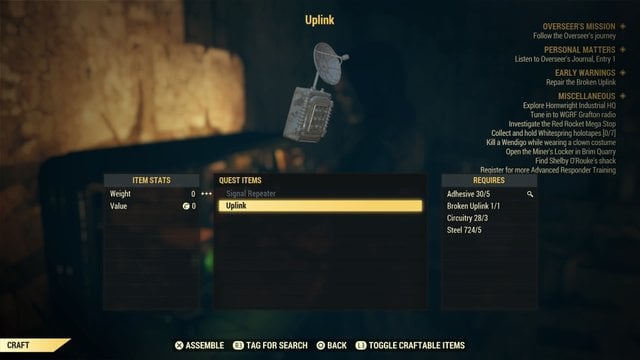 After accepting the quest and listening to Abbie’s instructions your first task will be to repair the Broken Uplink you found at Pleasant Valley Ski Resort during Key to the Past. You can repair it by taking it to any Tinker’s Workbench (there is one in the bunker) and finding Uplink under the Quest Items tab.

Once the Uplink is repaired head straight back into the main room of the bunker and use the Scorched Detection System Terminal. Select the option “>Uplink Repaired” to open up the next objective. 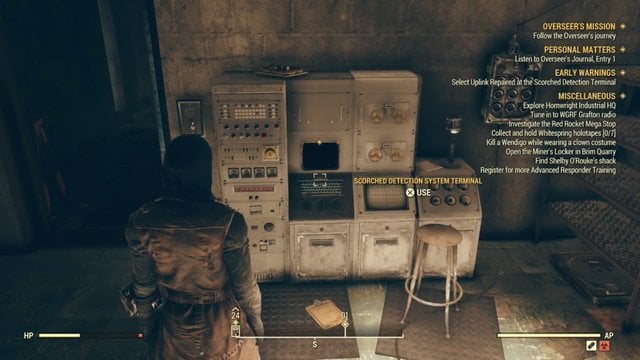 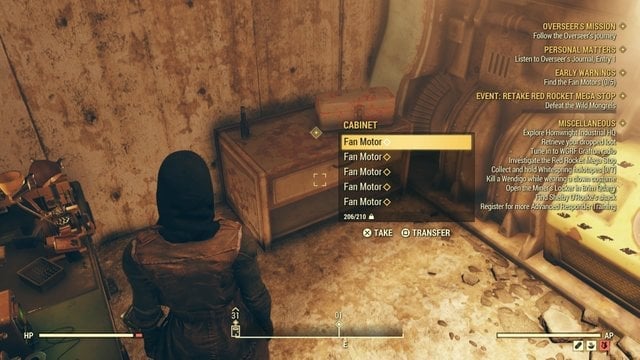 Next up Abbie will tell you to collect some Fan Motors, which can be found in Raleigh Clay’s Bunker located far to the south. Simply follow the road south of Abbie’s Bunker until your each the bunker tagged with a quest marker. 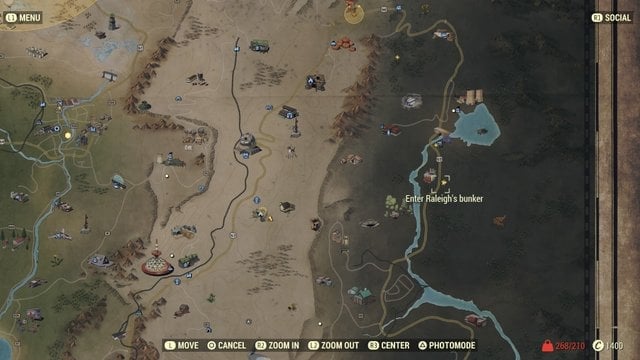 Inside you will find a bunker almost identical to Abbie’s. Grab whatever loot you like, kill the Radroaches, then use the workbench to scrap any junk. Go into the generator room and loot the Fan Motors from the Cabinet. There is also an optional objective to collect some Wood Armor Plans located in the crafting room. Grab them if you like, but either way move onto the next objective. 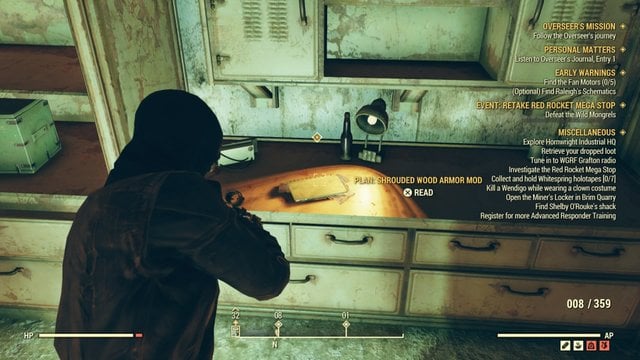 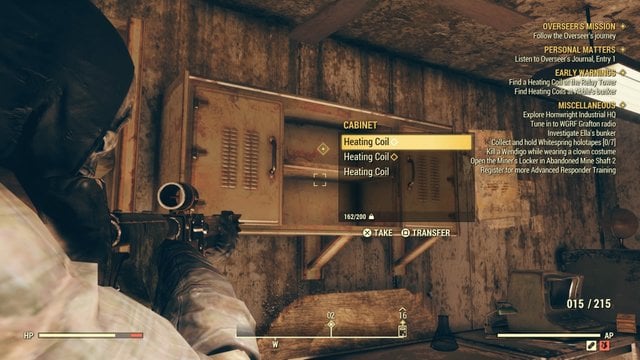 Next you will need to get your hands on a few Heating Coils located all around The Mire area. Luckily the first one is located in Abbie’s Bunker, so warp or walk back over there and grab it from inside her bunker. 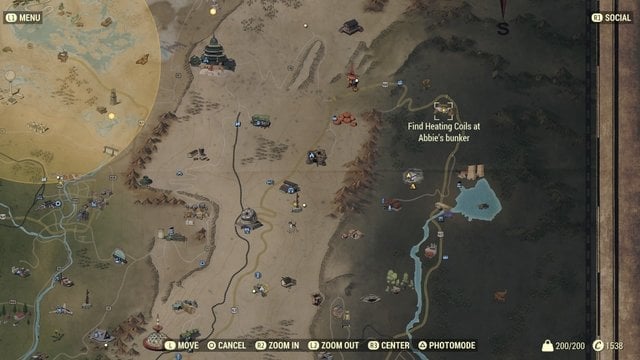 Next you need to head to Ella Ames’ Bunker, located in a swamp southwest of Abbie’s Bunker. Once inside you will find yet another nearly identical bunker. Find the quest marked cabinet and grab the Heating Coil inside. 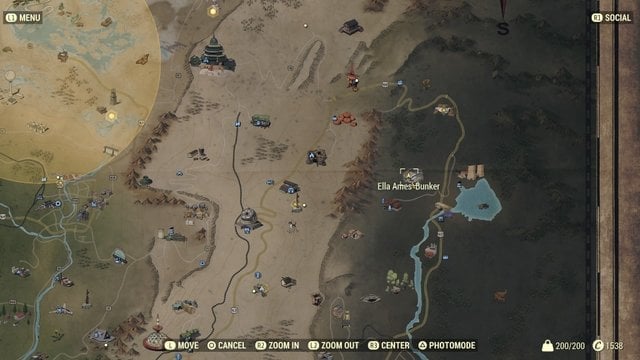 The final coil can be found at Relay Tower LW-B1-22, located northeast of the ATLAS Observatory. The tower will likely be guarded by a swarm of Super Mutants, so take them out and head inside. There is some scattered loot here so grab whatever you want, then find the final Heating Coil inside the marked toolbox. 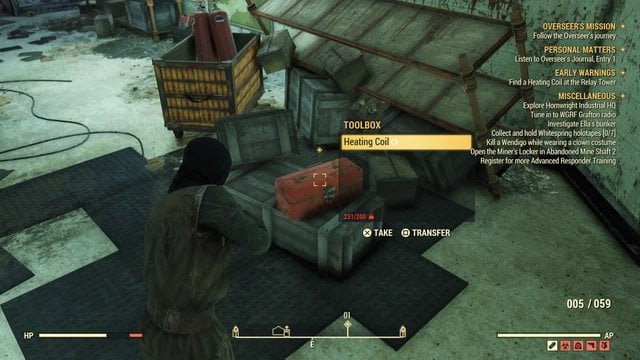 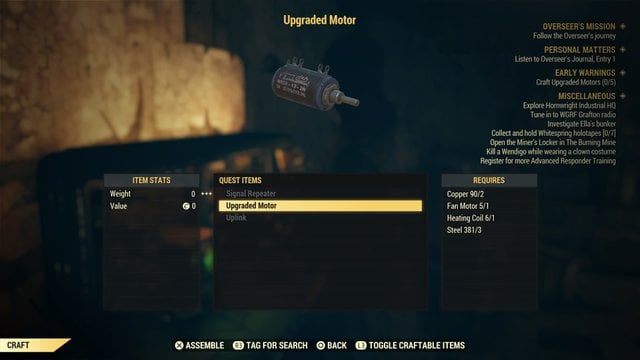 With all of the motors and heating coils in hand, its time to make some motors. Head to any Tinkers Bench (I recommend the one in Abbie’s Bunker since you need to be there for the next objective), go to quest items, then select the Upgraded Motor. Make 5 of them, then head back to the terminal in the main room of the bunker. Login again and select option “Motors Upgraded” to complete the quest. 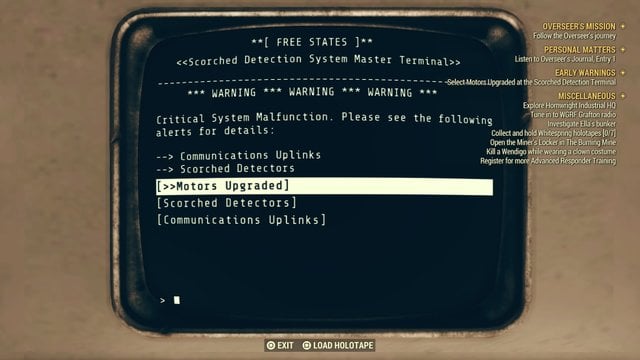 Upon completing the quest you will automatically be given your next quest, Reassembly Required.