Fallout 76 – Key To The Past Walkthrough

Key To The Past Summary

This is another one of Rose’s quests in Fallout 76 that are mandatory to do in order to please her. This quest will take you through already explored and new locations.

The Password
Rose wants you to find five fragments of a Password to open up a Raid Cache. Head to the objective marker and enter the Blackwater Mine. Use the terminal inside and select any entry except for the last one to complete the objective.

Now go deeper into the mine and kill a woman named Freddie Lang to get the Mine Key Fragment. Once you have it, leave the mine. Now, for the next Password fragment, head to the Trapper’s Camp on Devil’s Backbone.

However, the fragment isn’t there so you need to follow the road to the West to Huntersville. In the center of the town, you will find a body of Walter Griswold and grab the fragment.

Now head to the Sunnytop Ski Lanes and it will be crawling with enemies. Go through the entrance and take a left and the objective marker will lead you to a room. Listen to the Holotape and then go to the opposite end of the lodge. Head downstairs and there will be a terminal at the far end. Select Inbox and then read the “Admin Password Entry”.

Now you need to get to the Palace of Winding Path and you will find the Admon Password in a dresser inside the palace. Now head downstairs and use the Holotape Duplication Terminal and create the Diehards Key Fragment by selecting “Duplicate From Archives” and then “Diehards Key Fragment”.

Now you need to look for some notes around Bolton Greens. Get there and head to the top floor and find the Gourmands Notes. The notes will lead you back to Savage Divide to get the Gourmand’s key Fragment in a place known as Wendigo Cave.

Head to the Wendigo Cave and you will have a lot of fighting to do. Fight your way through the cave to get to your objective and get out of there are quick as possible.

Not get to the Big Fred’s BBQ Shack and there will be a swarm of Feral Ghouls. David Thrope is now a scorcher and you will kill him. Loot his body for Cutthroat Key Fragment.

Dig Up The Past
Head back to ROse at the Top of the World with all of the key fragment and she will task you with finding a body of a woman named Rosalynn at the Charleston Capitol Building.

It is a very dangerous place so be prepared. Head to the Charleston Capitol Courthouse and head down the basement and used the marked terminal. Select the entry Doe.J and get in the room behind the terminal.

Now head east to the Pleasant Valley Ski Resort and enter the resort and then to its basement. The door will be locked and the key in under the mat. Enter the cache to complete the quest.

Key To The Past Walkthrough

Key to the Past is a Main Quest that can be started by speaking to Rose on the third floor of Top of the World after completing Flavors of Mayhem. 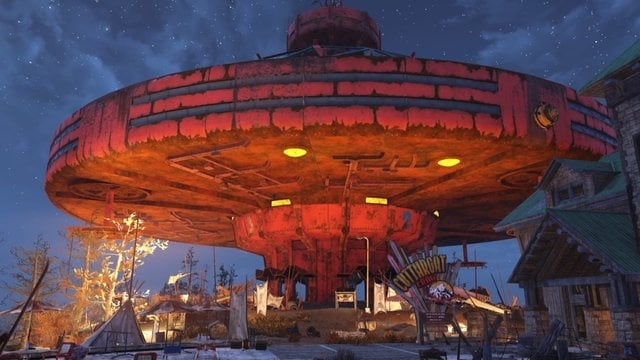 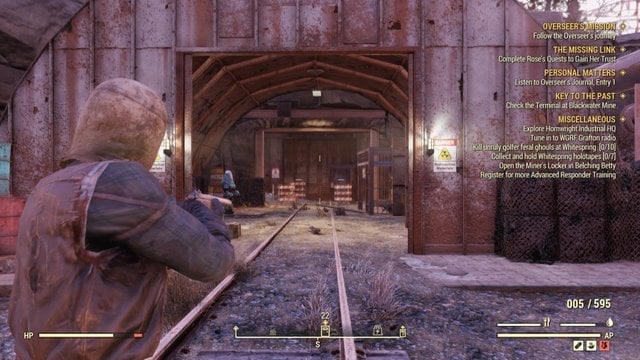 To obtain the first key fragment you need to look for the body of Freddie Lang inside the Blackwater Mine. Head to the mine, which is located east of Whitespring Resort. The outside of the mine is likely to be guarded by some Miner Moles (and occasionally even a high level Glowing Miner Mole). They can be avoided by simply running into the mine, but if you want to loot the area you will probably have to clear them out. 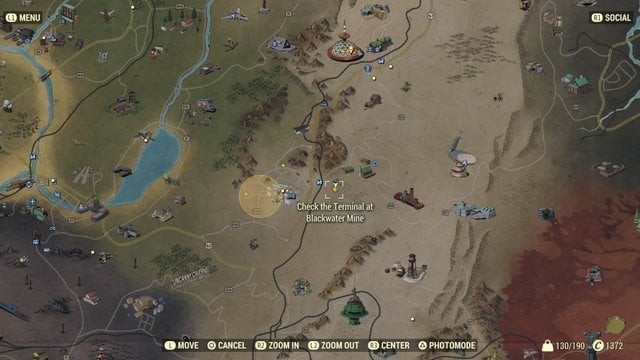 Once inside the mine you can grab some quick loot from the rooms to your immediate left and right. There is a bobby pin box in the office on the left, and if you use the stairs to get on top of the office there is a safe that can be lockpicked. Once you are ready to explore the mine follow the train tracks down the shaft. You will encounter some Radrats in a junk filled room.

Once past that room you will find a split path. Heading forward will take you across a rads riddled bridge to a dead end and some more Mole Miners. There is some minor loot you can get in the dead end, and there are also some workbenches you can use to scrap any random items if you need it. 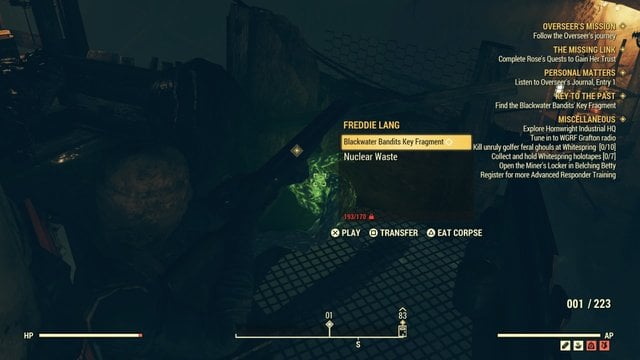 Heading into the hallway on the left will guide you to a large room filled with Mole Miners. These Miners are fairly threatening, wielding shotguns and powerful melee weapons. There isn’t much space in the mine, so it is easy to get caught in a close quarters battle. Lead them up the mine shaft if you need to create some distance. Clear them all out, scrap whatever items you need to, then follow the quest marker to the glowing green corpse of Freddie Lang to loot the Blackwater Bandit’s Key Fragment. 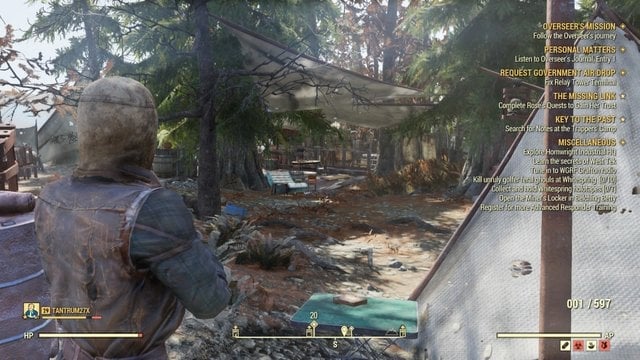 Next up is the Trapper’s Key Fragment, which you will need to visit multiple locations to obtain. Start by heading to the Trapper’s Camp marked on your map, south of the National Isolated Radio Array. Trapper’s Camp is not a Location, so you won’t be able to warp there and it can be hard to find. I recommend going south of the radio array without heading down the cliffs, then approaching the camp from the west side. This lets you avoid most of the traps set at the entrance. 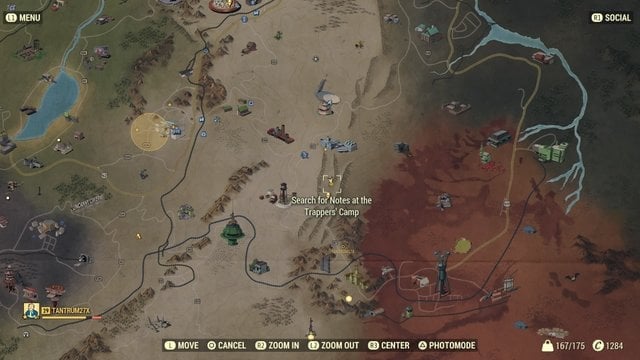 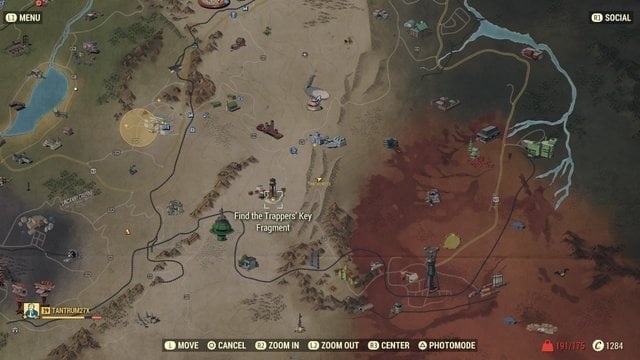 The key is found on Walter Griswold’s corpse in the middle of town. Unfortunately the town is overrun with Super Mutants, so you will have to deal with them before you get your prize. Once you have killed all the Super Mutants and looted the town to your content, grab the Trapper’s Key Fragment off Walter’s body. But be careful, grabbing the key activates a time bomb, so run away as soon as you’ve got it. 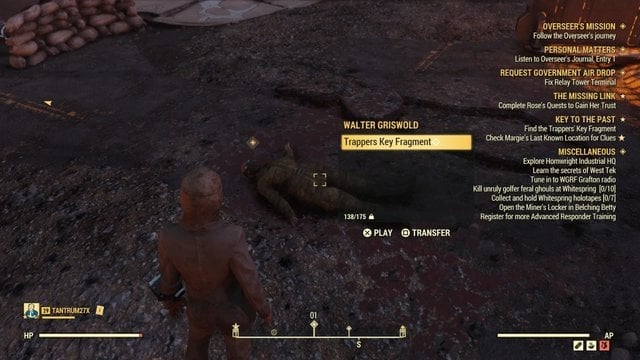 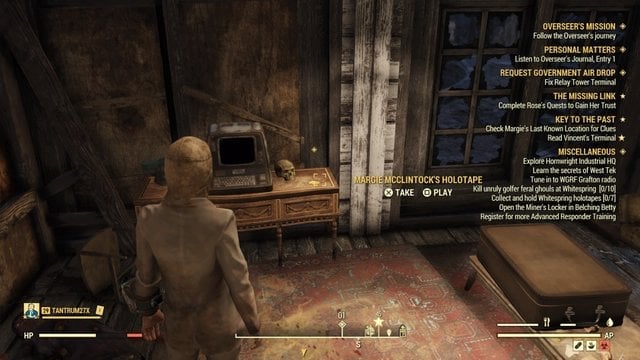 With the second key fragment in hand it is time to go after the Diehard’s, which again requires visiting multiple locations. Start by heading to Sunnytop Ski Lanes, far to the north of the ATLAS Observatory. To get there easily simply fast travel to the observatory then follow the train tracks north.

As usual the location is overrun with Scorched and possibly a few Ghouls and Radrats. Clear them out as you explore the buildings, and grab whatever loot you like. Follow the quest marker into a small room with a computer terminal. Grab Margie McClinktock’s Holotape and listen to it to learn more about the missing key fragment. 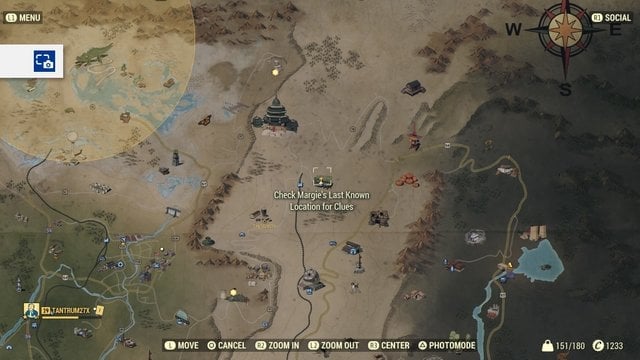 With that new information in mind, its time to follow the quest marker to the ground floor of one of the hotel buildings and find Vincent Fried’s Terminal. The terminal is located behind one oof the desks, and there is actually a chance for a Bobblehead to spawn underneath it so be sure to check the shelf. Inside the terminal select “Inbox” then “Admin Password”. This will tell you where to find the password, located at another location called the Palace of the Winding Path. The palace is a massive location full of loot, Super Mutants, and Scorched, so be sure to loot to your hearts desire. (and use the benches in the basement to scrap) 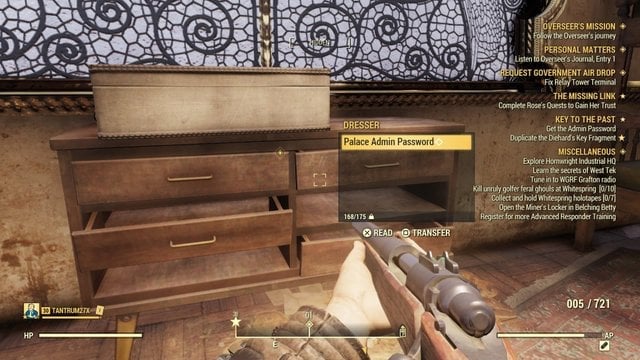 Once you are done grabbing the goods, follow the quest marker to the librarians room and grab the password out of the secret compartment in his dresser. Take that password to the Holotape Duplication Terminal denoted by the quest marker, then select options “Duplicate From Archives” then “Diehard’s Key Fragment” to get the next piece of the key. 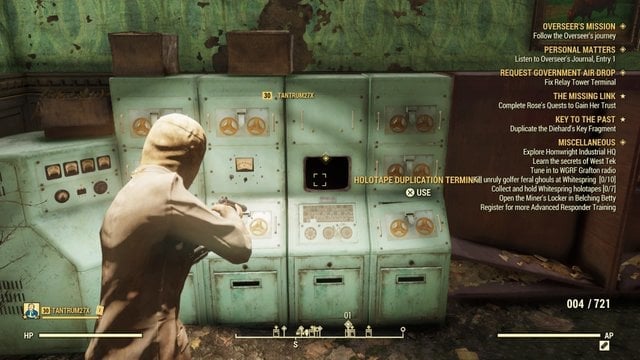 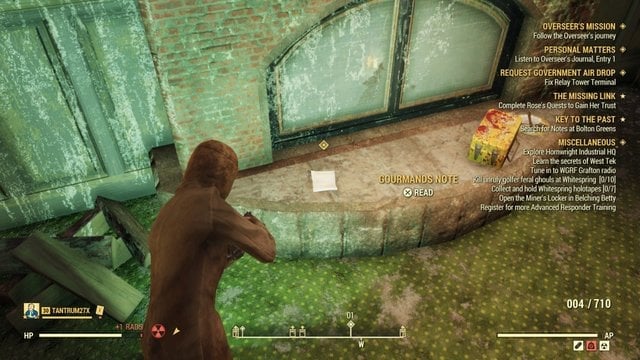 Your hunt for the Gourmand’s Key Fragment will start at Bolton Greens, a golf club located west of the Seneca Rocks Visitor Center. Deal with any Sorched that get in your way and head up to the bedroom on the third floor where you will find the Gourmand’s Note. 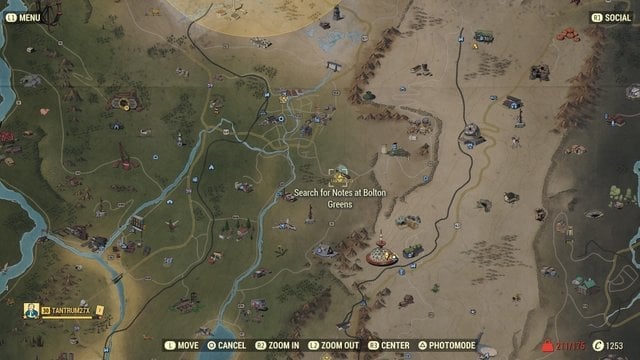 The Gourmand’s Note will direct you to the Wendigo Cave, located southeast of ATLAS Observatory. You will have to do battle with a powerful level 32 Progenitor Wendigo to get the key piece, so be sure to bring along plenty of stat boosting drugs. (I recommend Med-X and Psychobuff), Stimpaks, and a good weapon for dealing with a fast moving enemy (If you have any friends playing the game this would be a good fight to take on as a group) 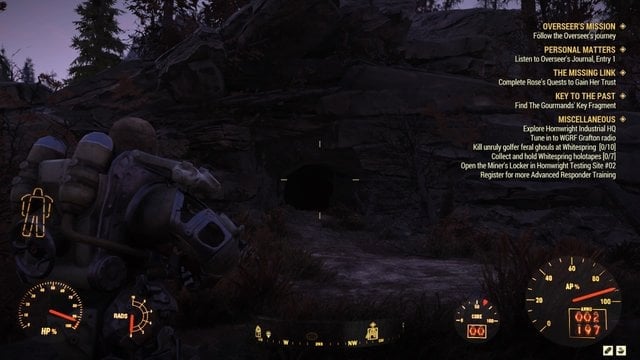 With all of that gear in tow, heal up and head into the cave. You will encounter Feral Ghouls near the entrance to the cave, and as you go deeper you will start to run into powerful Mirelurks. There is even a chance to encounter a powerful Mirelurk King, so I highly recommend doing your best to sneak past all of them on your way to the quest marker. 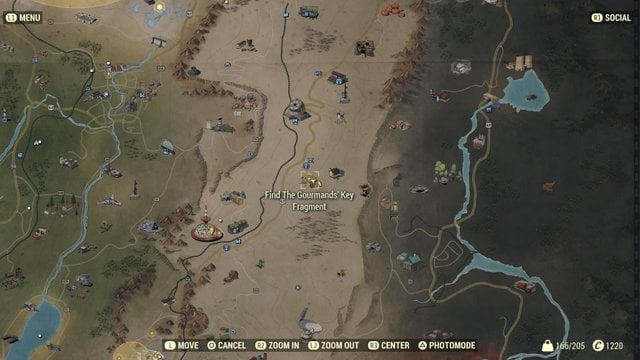 When you get close to the quest marker you will see a downward sloping path leading into a large open cave area with a small waterfall. Before you head down, use your Med-X, Psychobuff, and whatever other stat boosts you want. As soon as you walk into the cave the Progenitor Wendigo will come down and engage you in battle. Shotguns and other hipfire style weapons are good for this fight because the Wendigo moves so fast. Try to backpedal as you take potshots at him, and use VATS to get some free accuracy. 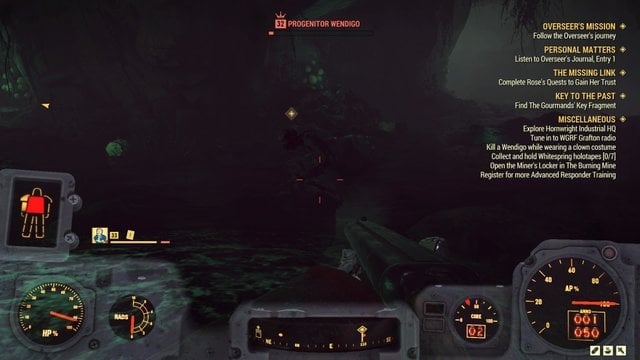 Once he is defeated loot the body to grab the Gourmands Key Fragment and move on to the next objective. 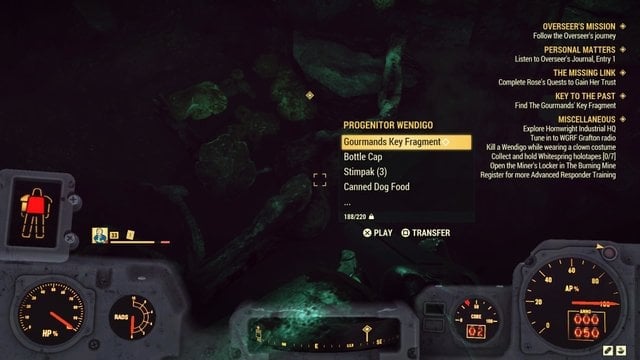 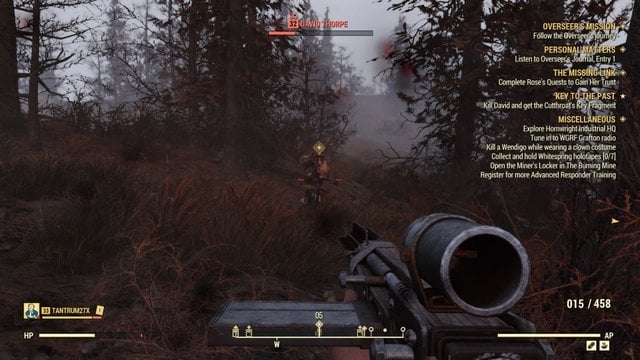 Rose will tell you that the final piece of the key is held by a raider named David Thorpe. David can be found at Big Fred’s BBQ Shack, located southeast of Top of the World. David will be running around wildly outside the shack, along with some other enemies. Take him down and grab the Cutthroat’s Key Fragment off his body. 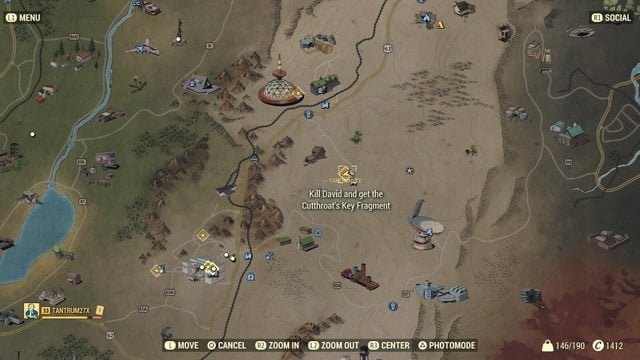 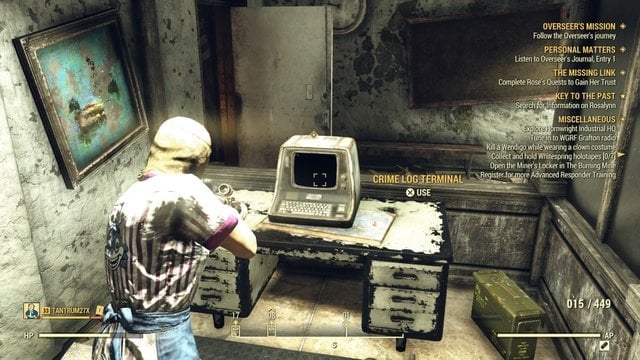 Return all of the key fragments to Rose at Top of the World and she will give you another task: head to the Charleston Capitol Building and get info on a woman named Rosalynn. You should already have this location unlocked from when you did the Firebreather’s quest, so warp and head inside. Battle through whatever Super Mutants or Ghouls have spawned inside and find the Crime Log Terminal labeled by the quest marker. Open the file marked “Doe, J.” to get the necessary information and open up the final objective. 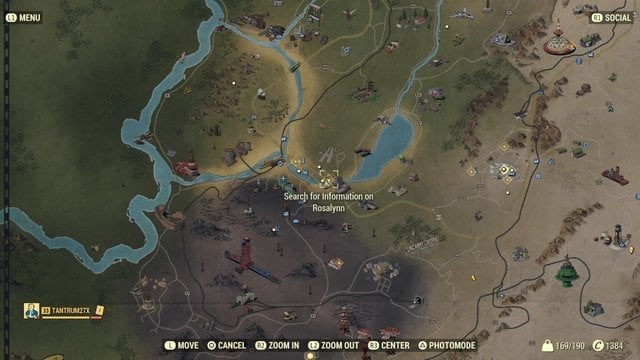 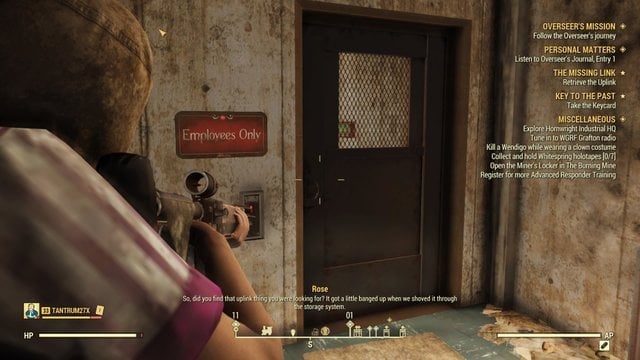 With all of the necessary items and information obtained, you can finally go to the cache located in Pleasant Valley Ski Resort, directly east of Top of the World. The area will likely be guarded by Mole Miners, so clear them out and head inside the resort. Head up the stairs behind the front desk then down the hall toward the gift shop. Take the stairs to your left down to the bottom floor where you will find a keycard locked door. 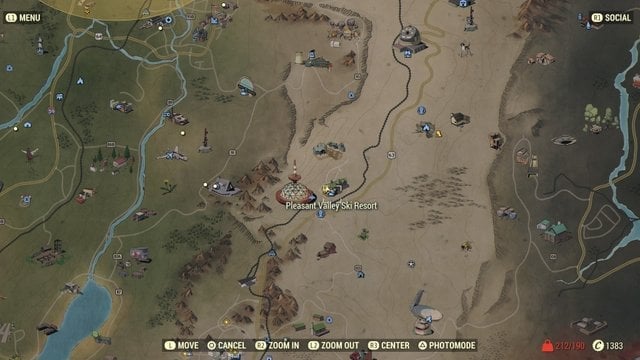 Rose will tell you to check for the key under the floormat in front of the laser guarded door. Grab it and head inside to complete the quest! There is some loot to grab inside the cache, as well as a level 3 lock safe you can open if you have the perk cards.

Next to the safe you will find the Broken Uplink, needed to continue The Missing Link main quest. 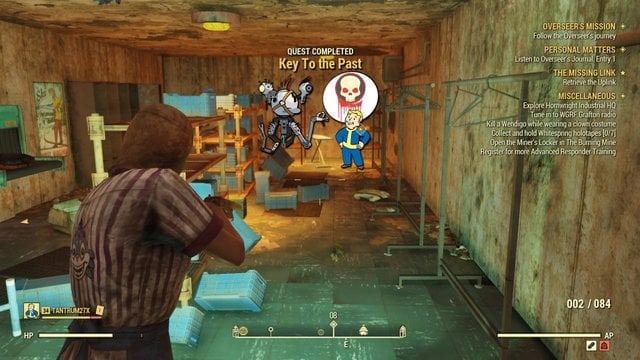