This quest is triggered by accessing the archives of a terminal inside the Hornwright Industrial Headquarters.

The quest is essentially simulated business espionage. With the players needing to make it to the position of an executive by taking an automated exam in the building.

The questions of which can be answered either by finding the information in the building. Or by cheating with the aid of your helpful hints from vault boy box.

After managing to forge an executive access card, the players can enter the executive office.

Where they will find a terminal with instructions on how to acquire the motherlode, being an acquisition code that they need to punch into the access terminal.

After placing the acquired repair beacon in its launcher, the motherlode will show itself as a somewhat sentient being, and after a brief appearance will then dig back into the Earth. Leaving the mission rewards in its wake. 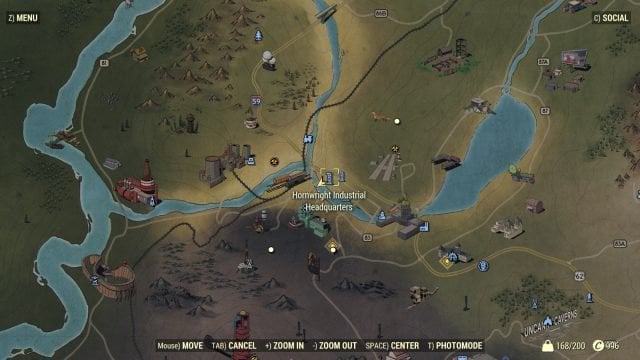 The Fallout 76 The Motherlode side-mission can be found at Hornwright Industrial Headquarters, which is near the center of the map. If you head directly south from Vault 76 or Flathills you’ll find it, just on the outskirts of the remains of Charleston. You can see the exact location on map above, and it’s the tall building with “Hornwright HQ” emblazoned on it in blue. Be warned that the crumbling building next to it is infested with Super Mutants, so avoid that for now.

Head inside, and you should get the quest “Explore Hornwright HQ,” which should point you to a terminal in the lobby (because, the flooded floor’s highly radioactive). Log in, and check the message dated 9.29.77. You’ll then be told to search the office of a senior executive called Penny, which can be found five floors up. The Stairwell’s the easiest way, but make sure to clear the floors of Scorched and Ghouls as you go. Use Penny’s terminal, and the game will then task you to get an ID card.

What Are the Fallout 76 Hornwright Industrial Exam Answers?

To get a Hornwright Executive ID card, first you’ll have to head one floor down to the human resources department, where you’ll find a set of terminals. These control the Hornwright Hiring System. You basically need to get hired by Hornwright at an executive level in order to get the ID card. There are several ways to get hired as an executive, and one of those is by taking the Hornwright Industrial Exam.

Yes, we’re sad to say that the Fire Breathers exam is not the only one in the game. This one is optional at least, but the other option involves searching the building for either the exam answers or a completed executive-level resumé, and that’s a little complicated. It’s far easier to simply take the Hornwright Industrial Exam and follow the answers we’ve laid out for you below. They’re fairly obvious to be honest. Simply act dishonest and sneaky, and take the side of the company at all times.

Where To Find Information on the Repair Beacon 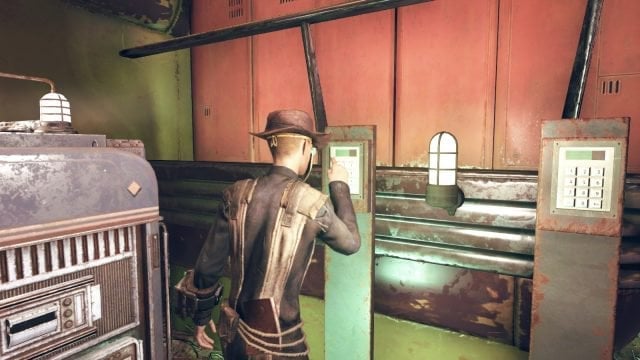 After you’ve completed the exam and printed out the Senior Executive ID card, you’ll need to head to the building’s upper floor. Unfortunately the stairs and the main elevators are out, which is why you had to get the ID card in the first place, as you need it for the executive elevator. It’s located in the lobby on the bottom floor, right behind the terminal you used to start the quest. Swipe your new card in the slot and take the elevator to the top floor.

Follow the objective marker to the lab, which is behind a grid of blue lasers which you can pass through. The opposite side is Hornwright’s office, which you can also search if you wish for lore and items but it’s not relevant to the quest. In the lab, speak to one of the AI unit interfaces and they’ll say you’ll need a repair beacon.

The next two mission stages can be the hardest in the quest, simply because they’re not well signposted, or marked at all. The first is to get more information on the repair beacon from the lab, but the main terminal doesn’t seem to have anything. We ended up following the mission marker outside hunting for this information, which was completely wrong. In fact, you don’t even have to leave the room. On the left side of the room (as you enter), there’s a raised platform and a burnt machine. This is the terminal you need.

Log in and it’ll give you a code to request a repair beacon: 36984. The marker seems to point to the same terminal, but there’s no way to put in the code. In actuality, there are small keypads on the other side of the computer (see picture above). Put the code in and the beacon will dispense in the machine on the left. Take it, then head down to the “sub room,” where you will be given a place to deploy the beacon. Do so, and step back…

What Do You Get For Completing Fallout 76 The Motherlode?

You can pick up the Motherlode’s gift in the small Docking Station Dispenser in the same room. Part of the reason why The Motherlode is such an important (and popular) quest is that it’s one of the only places in the game to get hold of Ultracite Ore, which you’ll need to craft the Ultracite Power Armor later on. Apart from that, you’ll be given a random assortment of caps, weapons and items, and XP of course. Congratulations, you’ve completed The Motherlode mission!