This is a guide for people who want to ensure their Blue Mage has all possible spells collected at their earliest points, in the order they can be retrieved.

This is a quick, basic guide for getting all Blue Mage spells as early as possible. The goal for this guide is that you can refer to it occasionally as you play the game, reading along every time you make some progress.

There are other guides with more exhaustive information about Blue Mage abilities, but I don’t think most players are interested in every single enemy that can possibly cast a spell- you want to be earning them as you play along! So this guide is written in a way that will let you do that 🙂

How does Blue Mage stuff work?
Blue Mage spells are learned by an enemy using these abilities on a Blue Mage in your party or someone with the “learn” ability. The spell must specifically target and land on the party member successfully or you will not learn it. This can be tricky depending on the enemy and the spell.

For example, Level 5 Death can only be learned when your level is a multiple of 5, such as level 5, 10, 15, 20, etc. and since players often have their entire party at the same level, this spell will typically kill the entire party. I have included some notes on how to work around this.

Sometimes the enemy won’t cast the ability I need. What gives?
There are some abilities that the enemy won’t use on its own or won’t target your party even when they do use it. For these abilities you need a Beastmaster with their second ability called “!control”. This allows you to control the enemy and force them to use the ability on your Blue Mage.

Some of these enemies are encountered before you get the Beastmaster class, so you’ll need to come back shortly after getting it (I have left notes letting you know when this is the case). 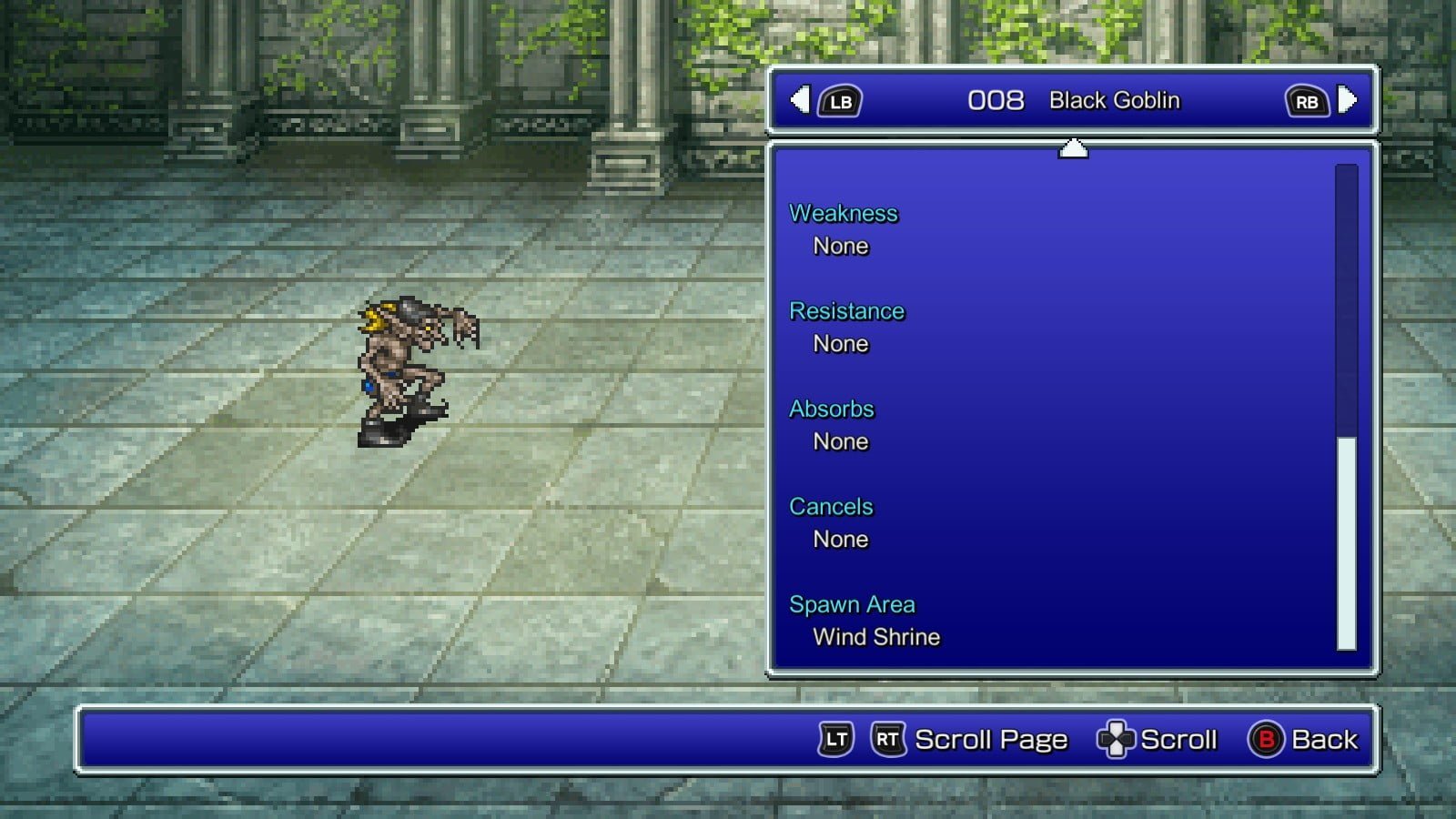 Attacks one enemy with a goblin’s strength.

One of the first enemies you encounter. It’s not a great ability. But it’s free? I guess?

Remember that you will need a Blue Mage to be hit by this ability and survive in order to learn it! The entire party will learn the ability as well, so no need for more than a single Blue Mage at any given time (unless you want one for casting abilities and another for learning abilities). 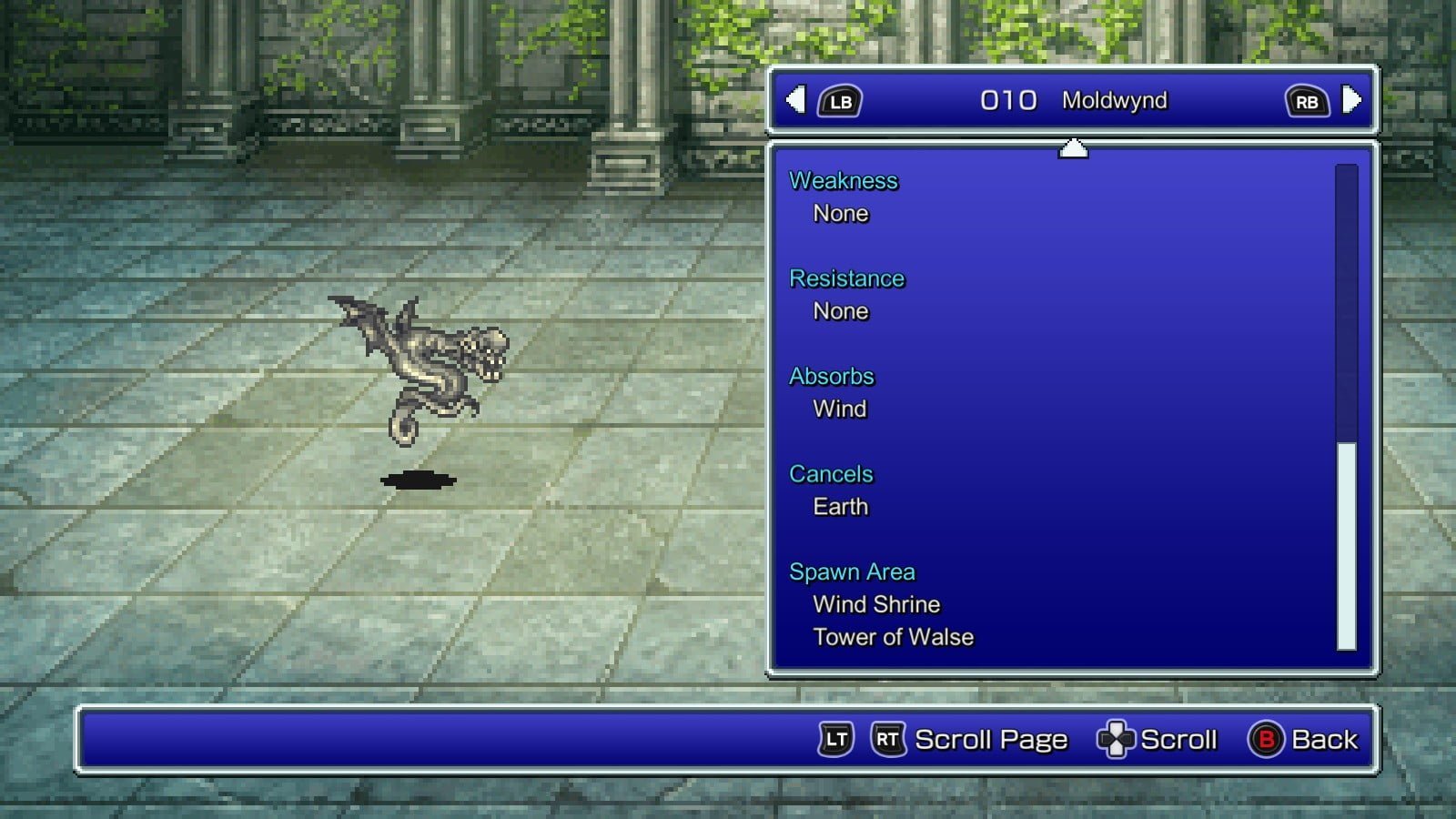 Valuable early spell and easy to get. One of the few sources of wind damage in the game. This should be the first ability you search for. 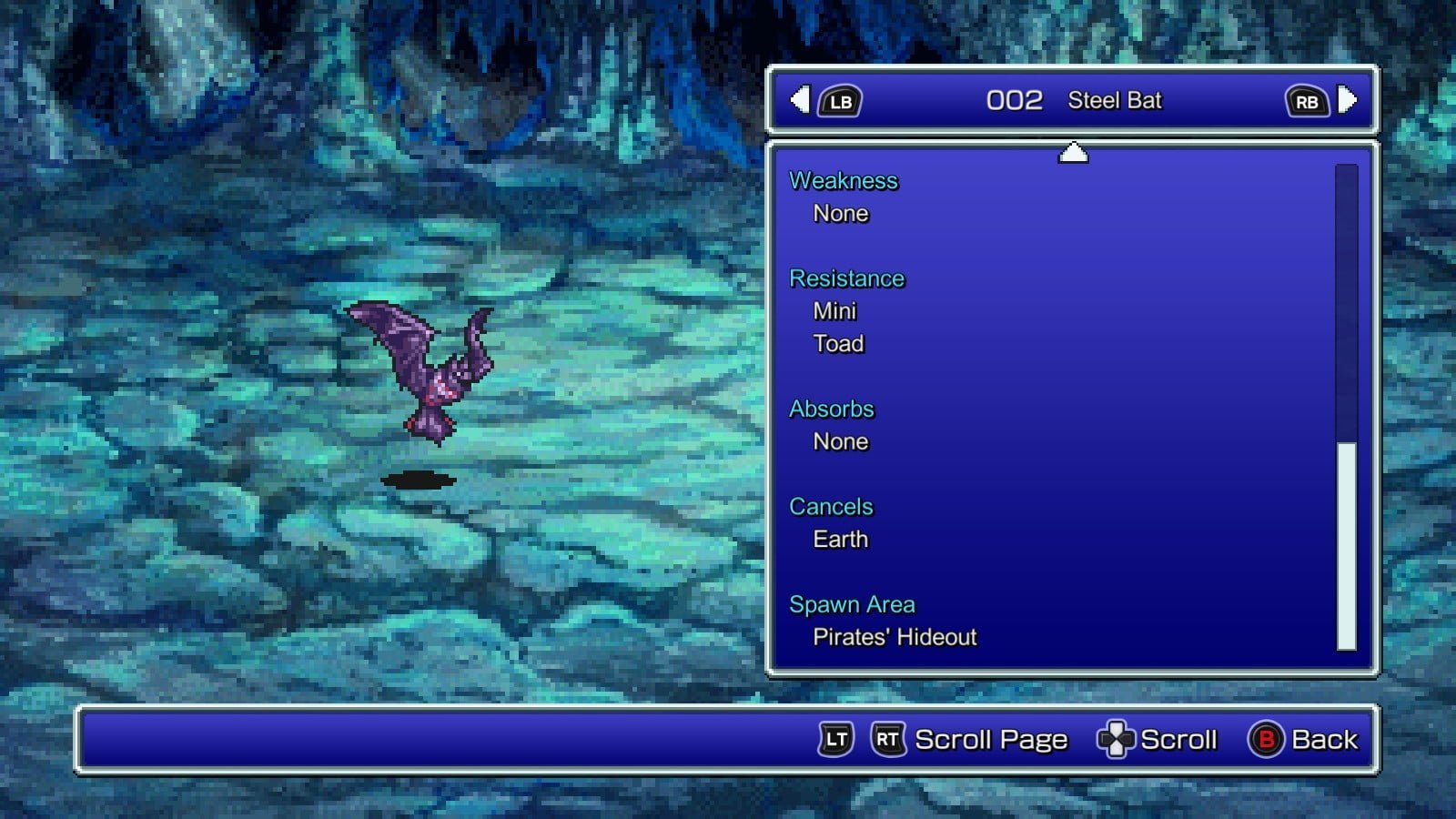 Absorbs HP from one enemy.

Another early valuable spell. Doesn’t do much damage but can heal you up in a pinch if damage is heavy and the healer is otherwise busy. 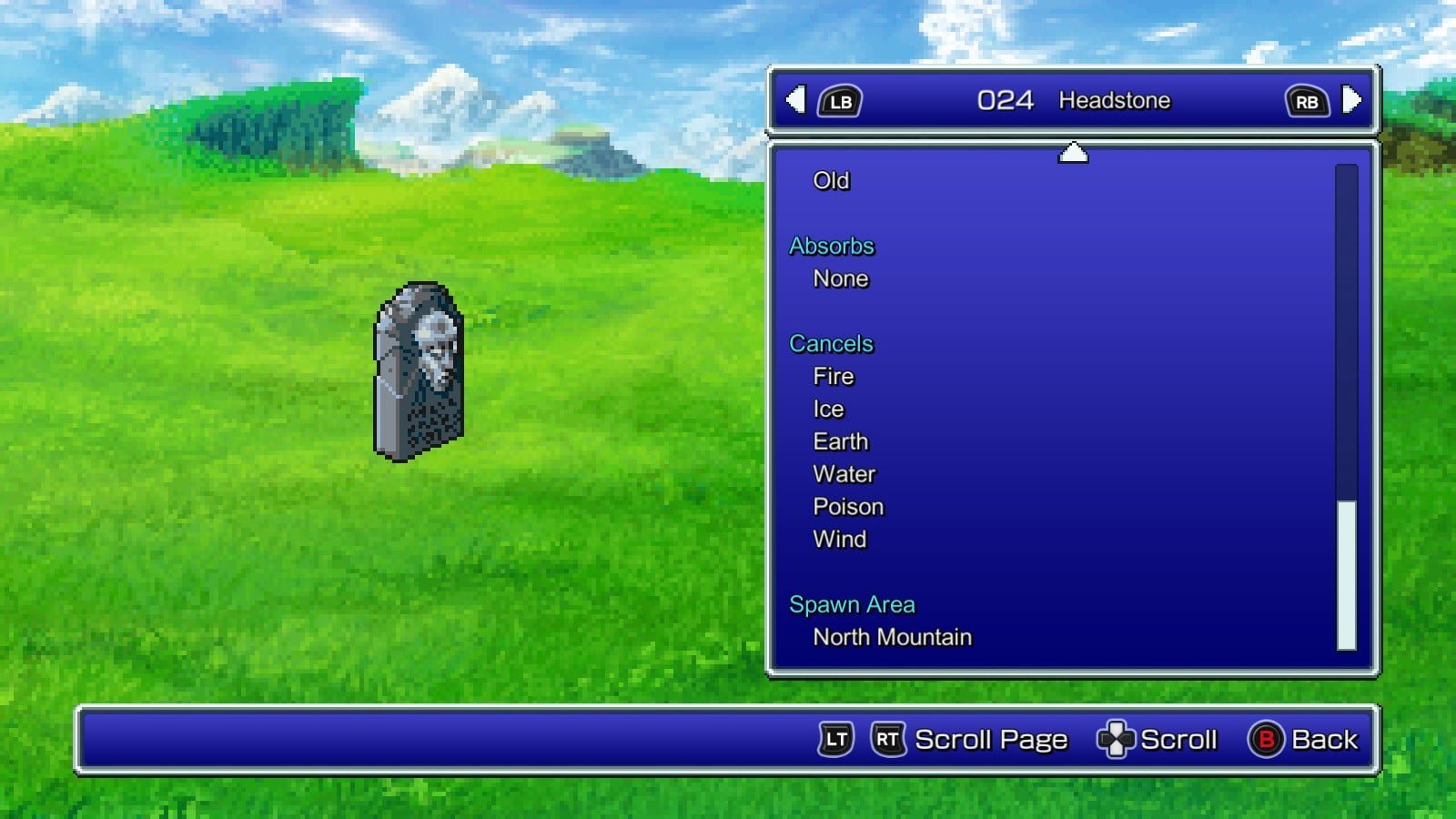 Inflicts all enemies with darkness.

Extremely valuable spell. Makes the Shiva encounter a walk in the park since the blind lands pretty reliably and hits all enemies at once.

Since Headstone does not have enough MP to cast the spell you must use an ether on it first. 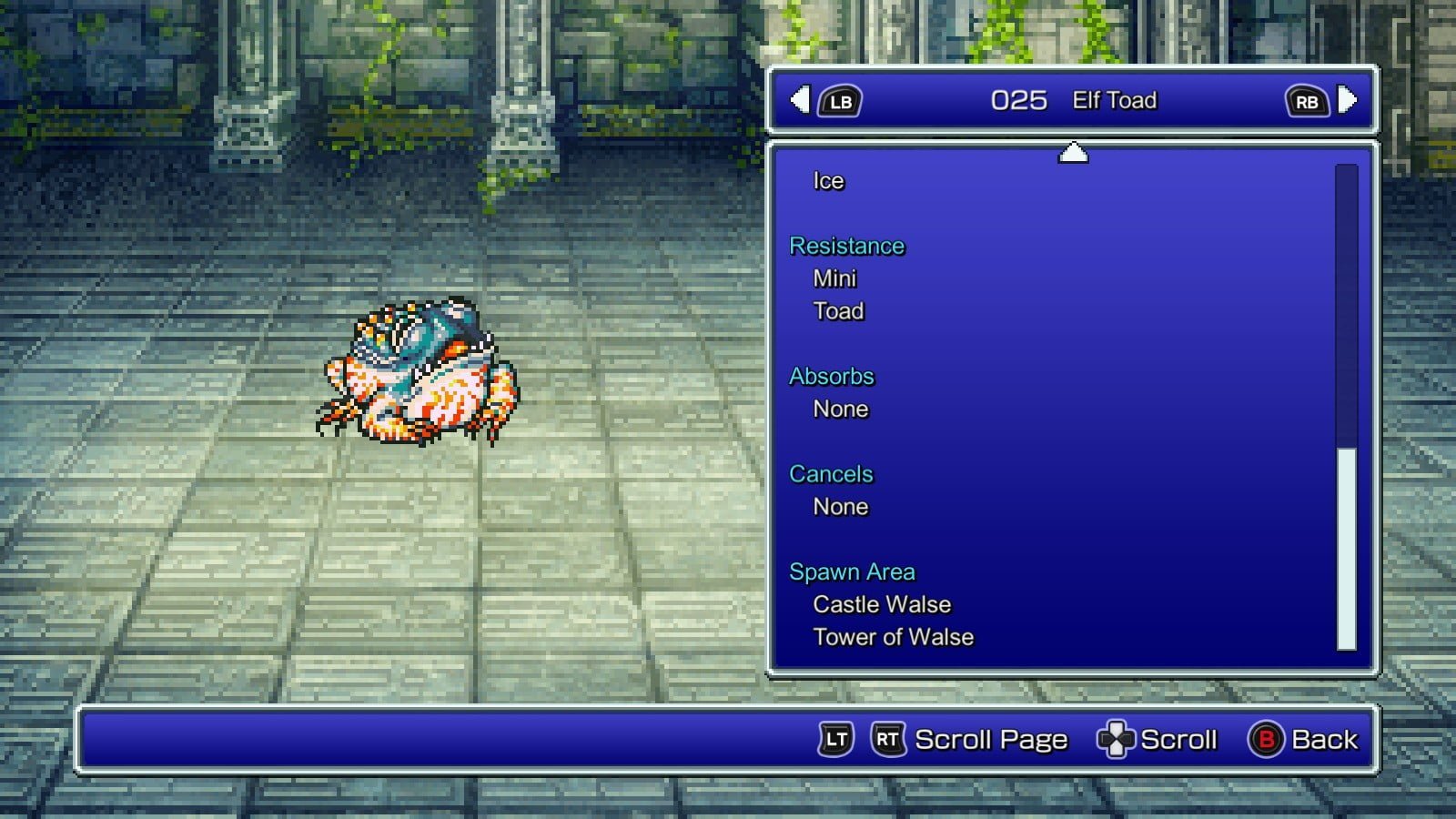 Turns one enemy into a toad.

Elf Toad will only use this ability when they are the last enemy remaining. 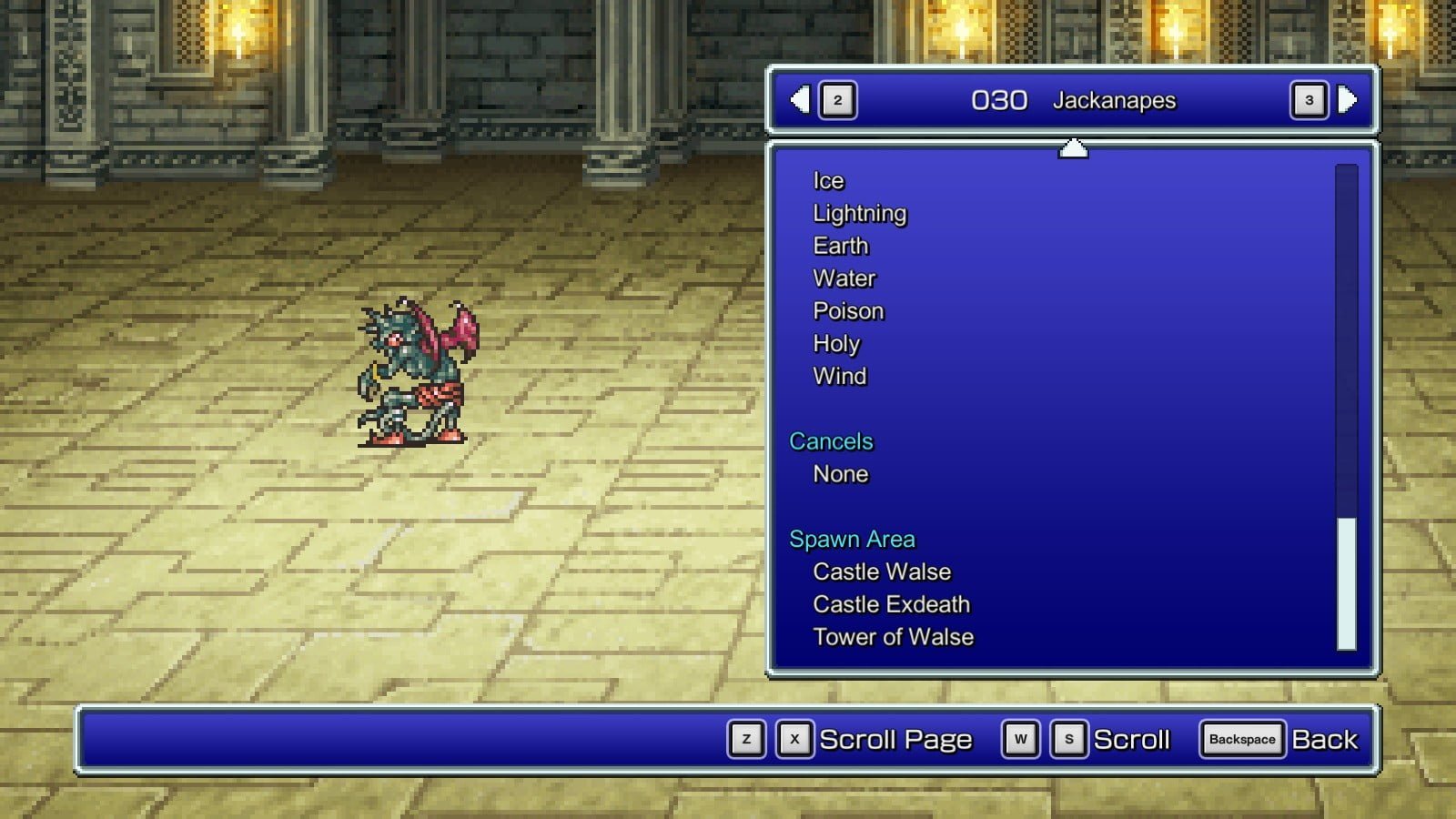 Causes berserk for all allies.

Even though Jackanapes is the first enemy who uses this ability, I would not recommended getting it from this encounter as its way too difficult at this stage of the game. Instead you can grab it from an easier enemy just a little further into the game. 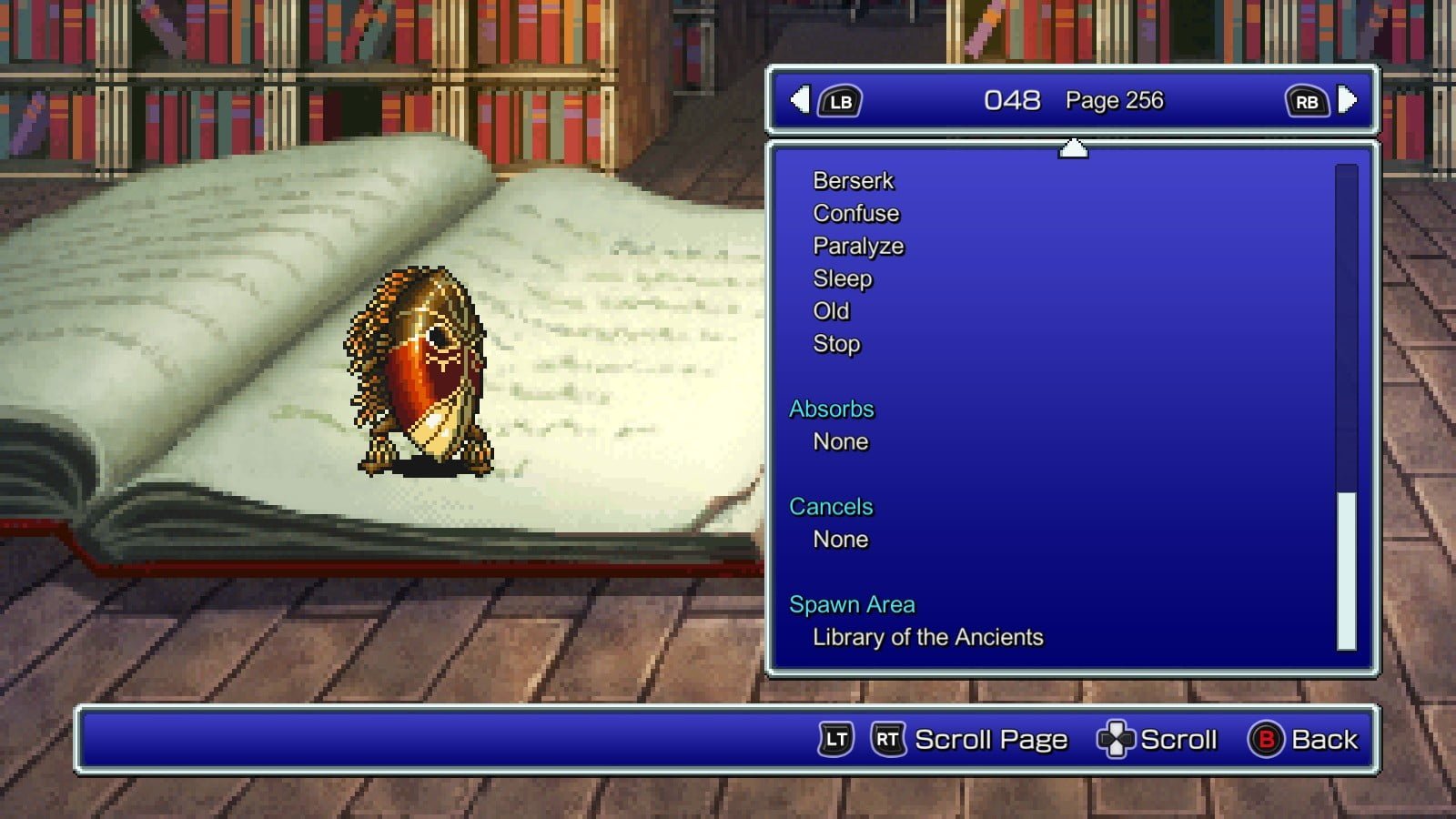 For a physical-damage based party this ability is amazing, as you’ll be dealing double damage roughly and attacking immediately thanks to auto-battle. There is no way to undo this once you’ve cast it. 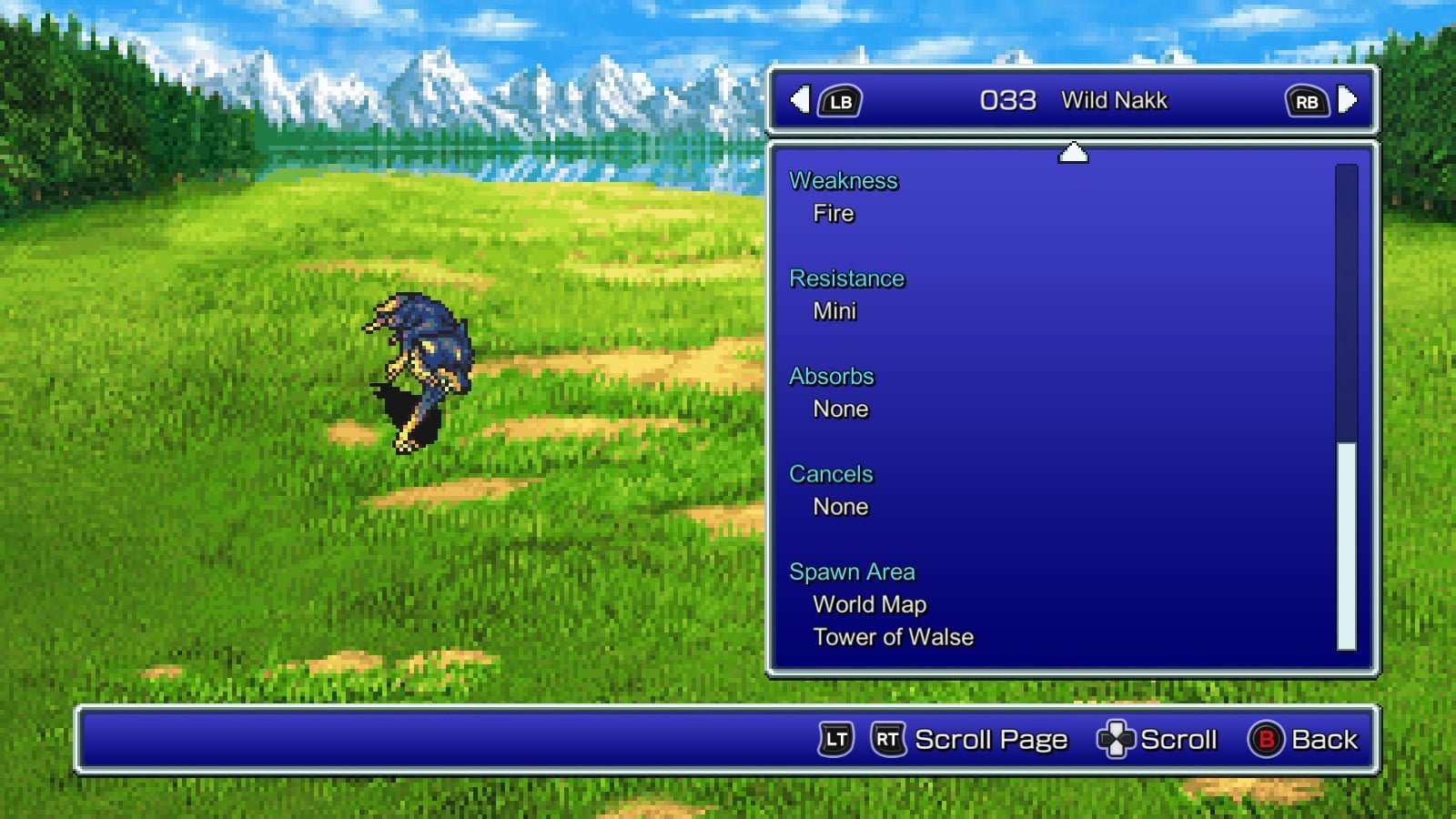 Does more damage depending on the difference between your current HP and your maximum HP. Great way to deal damage early in the game if the enemy has high defense. 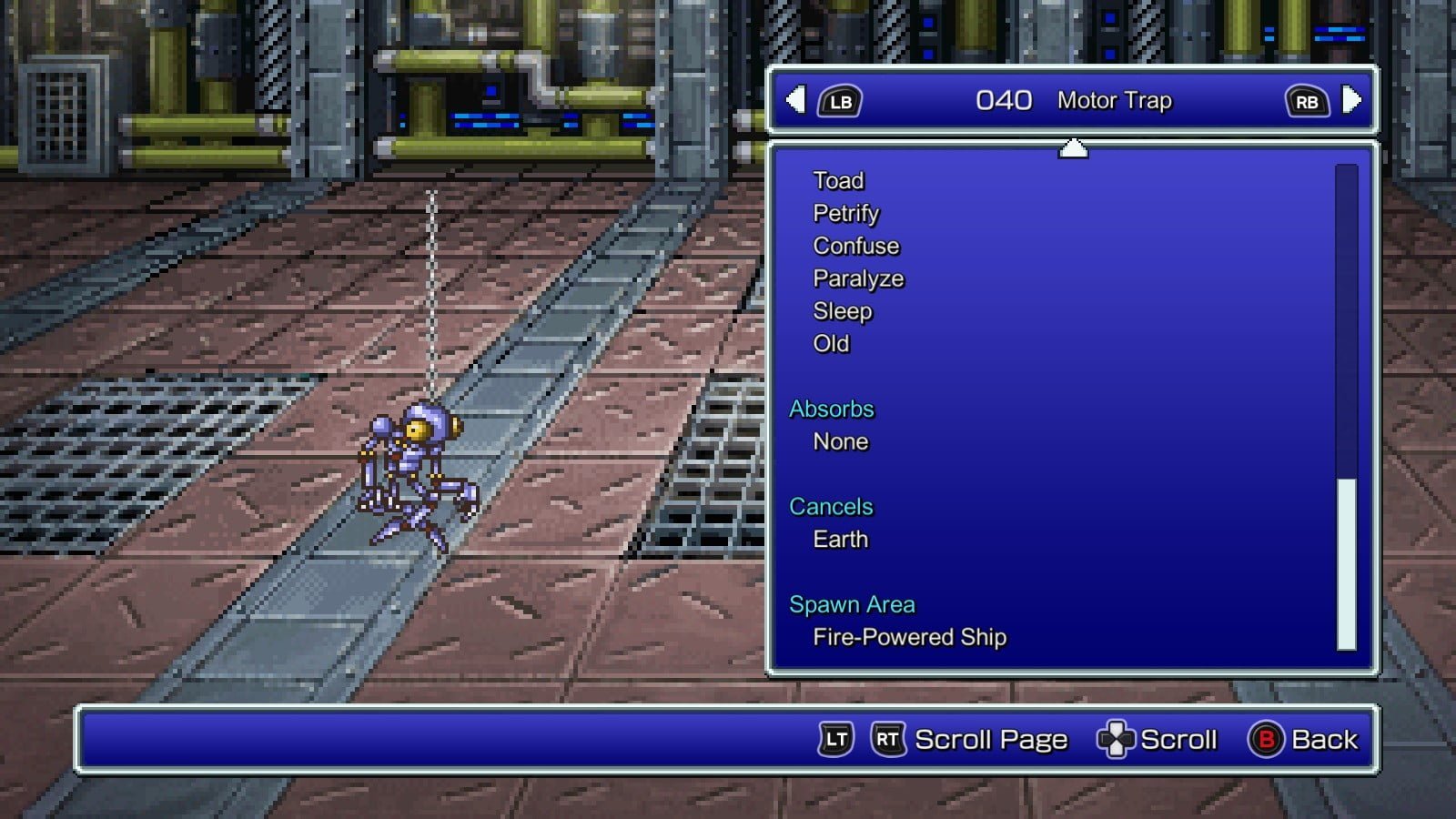 Sacrifices the caster to deal massive damage to one enemy.

This enemy appears sometimes when only one enemy remains during an encounter on the Fire-Powered Ship. You can cast thunder or a thunder-based ability on it to trigger Self-Destruct immediately. 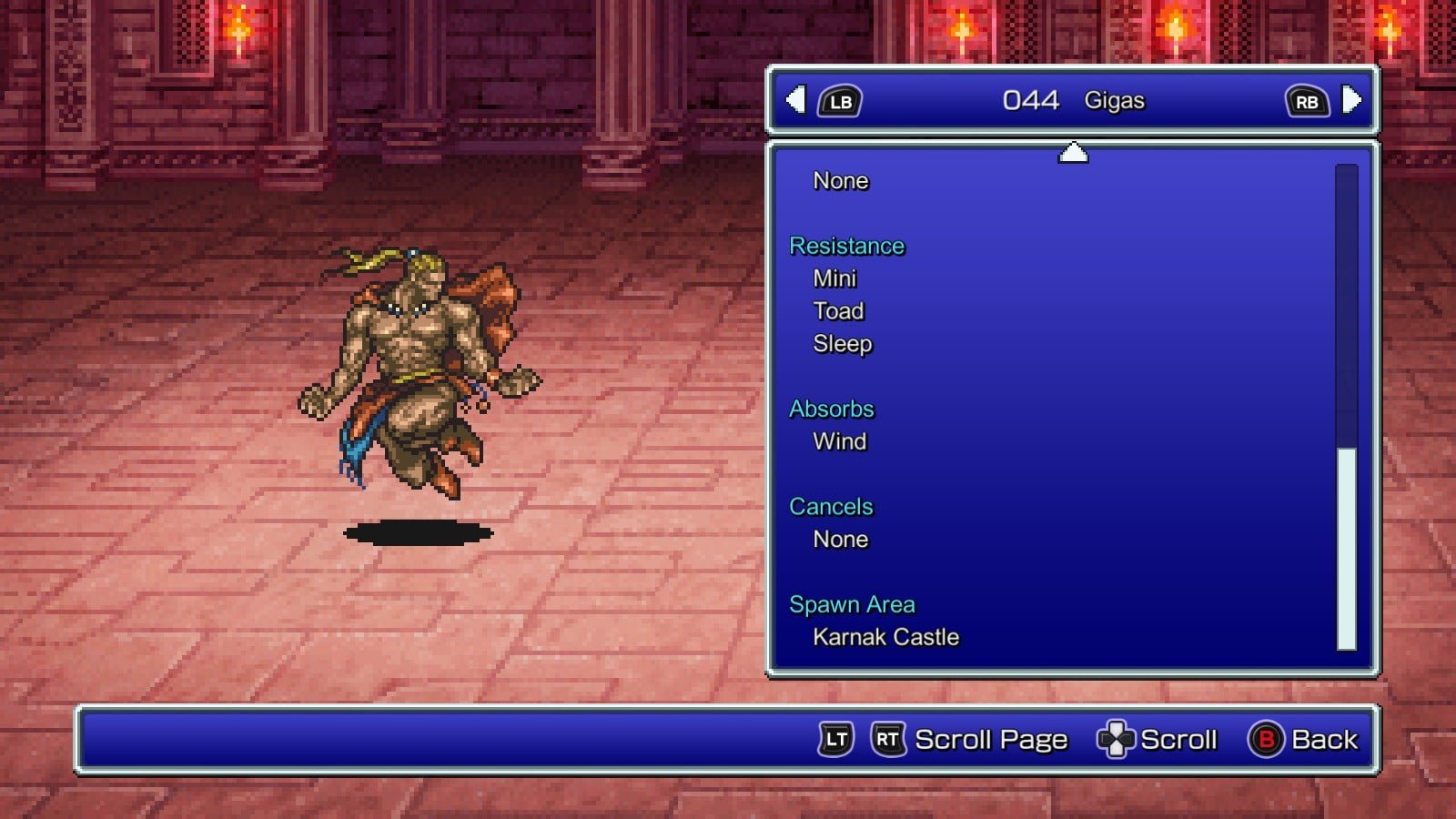 Solid ability and another rare source of wind damage. If you don’t get Aera from Gigas there are plenty of other enemies who use it throughout the game. Given the timer sequence you may not find it worthwhile to spend time grinding it here. 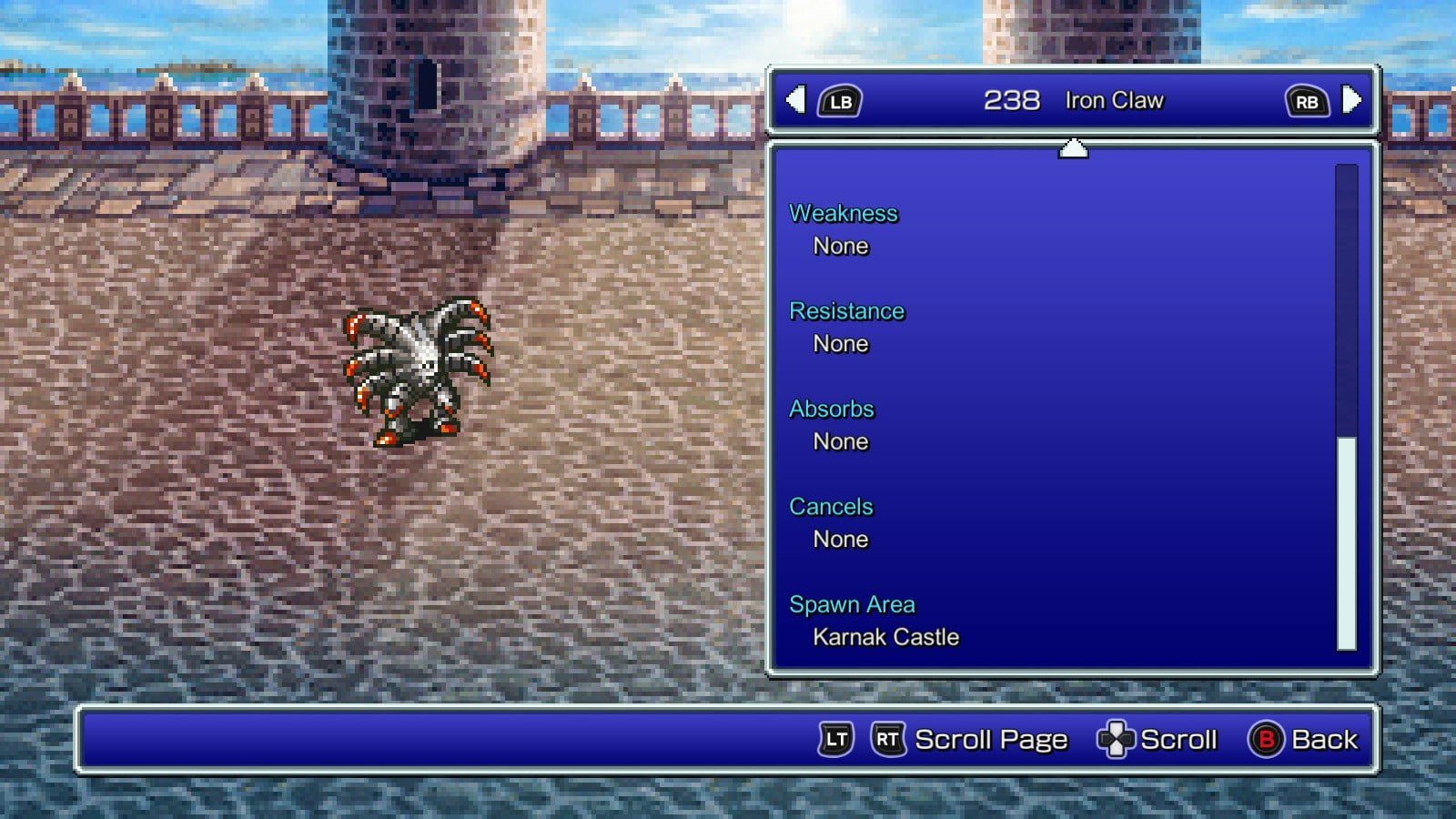 Brings one enemy to the point of death, and inflict paralysis.

Extremely valuable ability this early in the game and worth some of the frustration it takes to obtain it during the escape sequence. Since many early bosses are susceptible this can trivialize their encounters (especially the bombs in the second half of the game).

Would recommend quick saving at the end of the escape sequence with at least one minute remaining to get the ability, kill Iron Claw, and flee the castle in time. 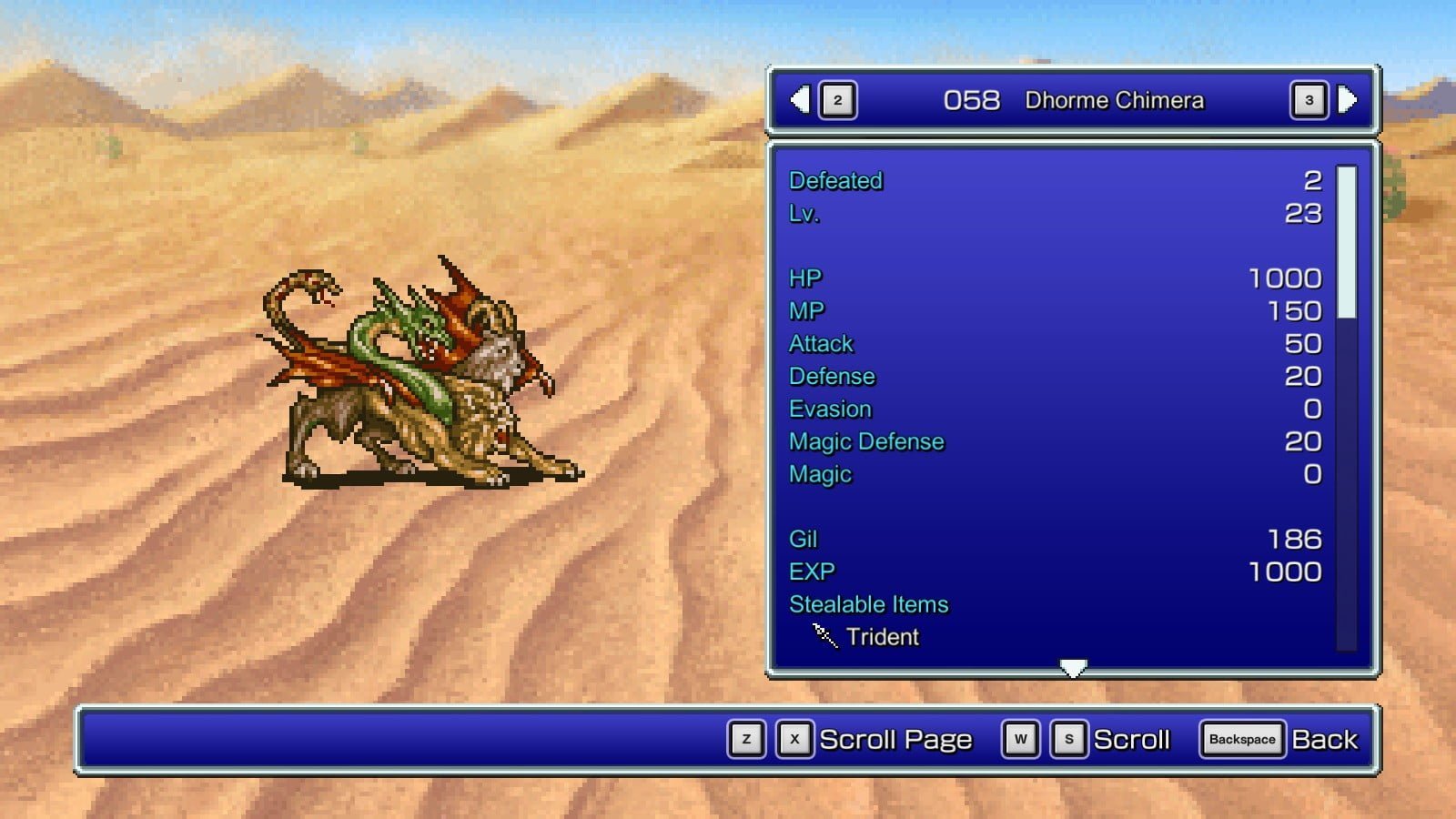 Uses bubbles to surround and damage all enemies.

Valuable source of non-elemental damage that is over-shadowed by its steep MP cost. Decent enough damage if you don’t have a Summoner available. 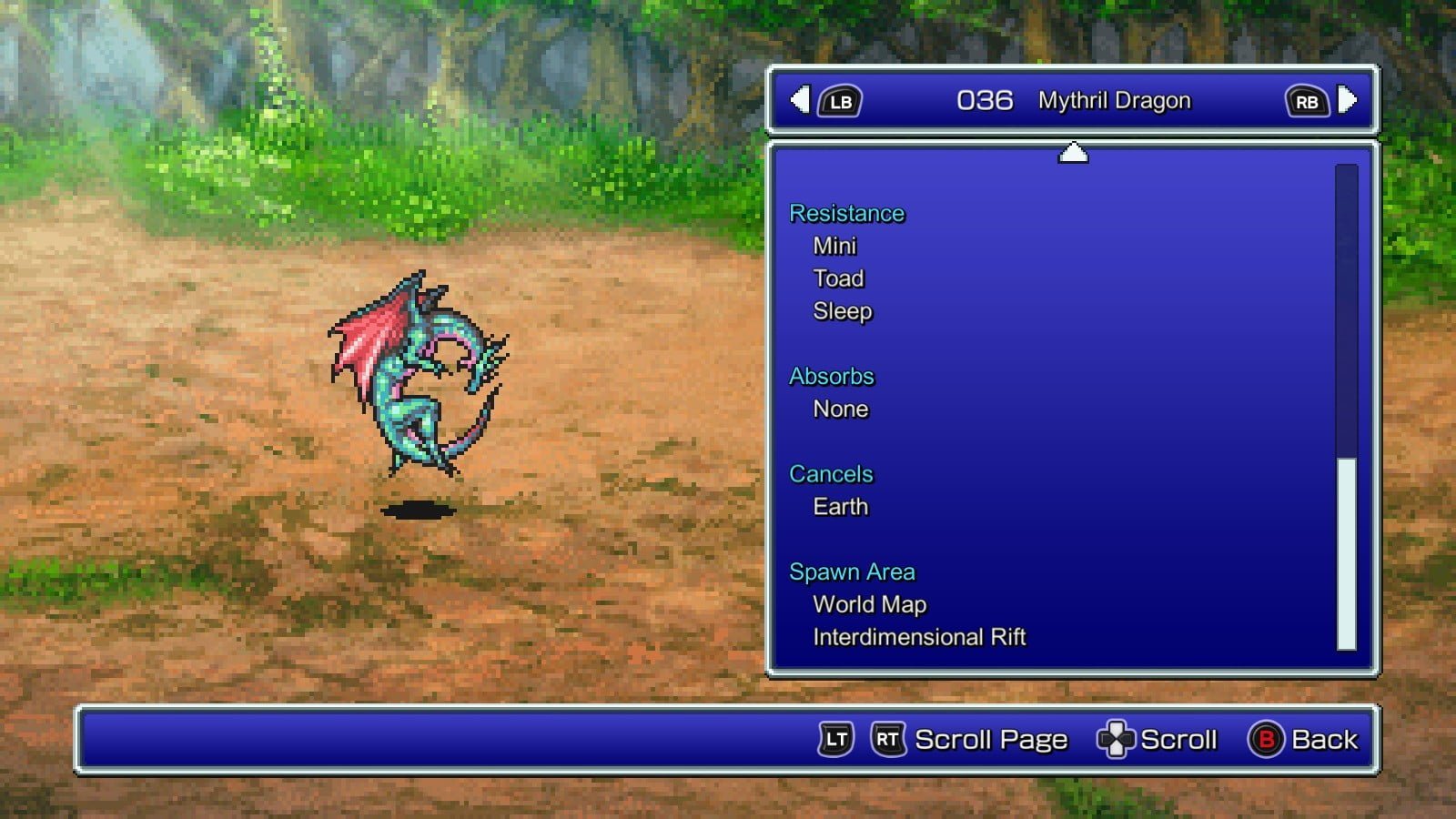 Sacrifices the caster to completely restore one ally’s HP and MP.

Earliest enemy: Mythril Dragon
Location: Plains area outside the Library of the Ancients

Great on paper but probably won’t see much use in practice. Might be a good way to heal up your healer if they ran out of HP and you don’t have any items to get the job done.

You will need a Beastmaster to use !control on a member of your party to get this.

I never found a great use for this ability. In any instance where you’re trying to do a large amount of damage, Death Claw or 1000 Needles seems the better options.

You will need to skip this initially and come back with a Beastmaster to force the ability using !control. Be sure to get this BEFORE boarding the ship again with Cid and Mid- otherwise it’ll be a few hours before you get another chance. 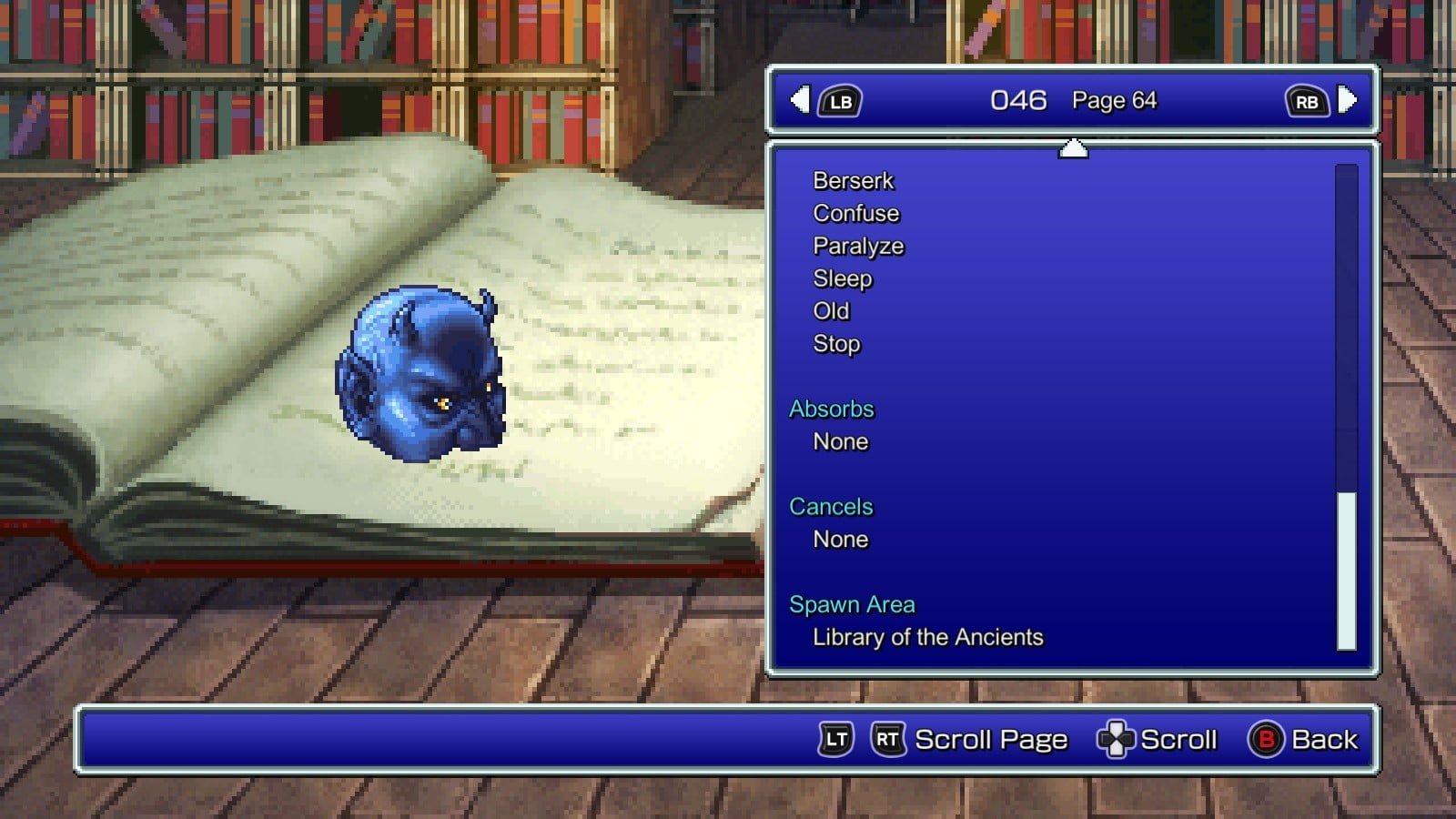 Hits enemies with levels that are multiples of 5.

Can only be learned by a character who is a multiple of level 5 getting killed by it. Would recommend coming back with Dark Spark (see further below) to adjust your level in combat, as often times your whole party has the same level and would be instantly wiped.

Reduces the defense of one enemy.

Great ability if you can succeed at landing it on bosses, though mine all missed when I tried. You’ll want a Beastmaster at the top of your party ready to !control as the first move is usually casting Moon Flute, which will berserk your entire party. 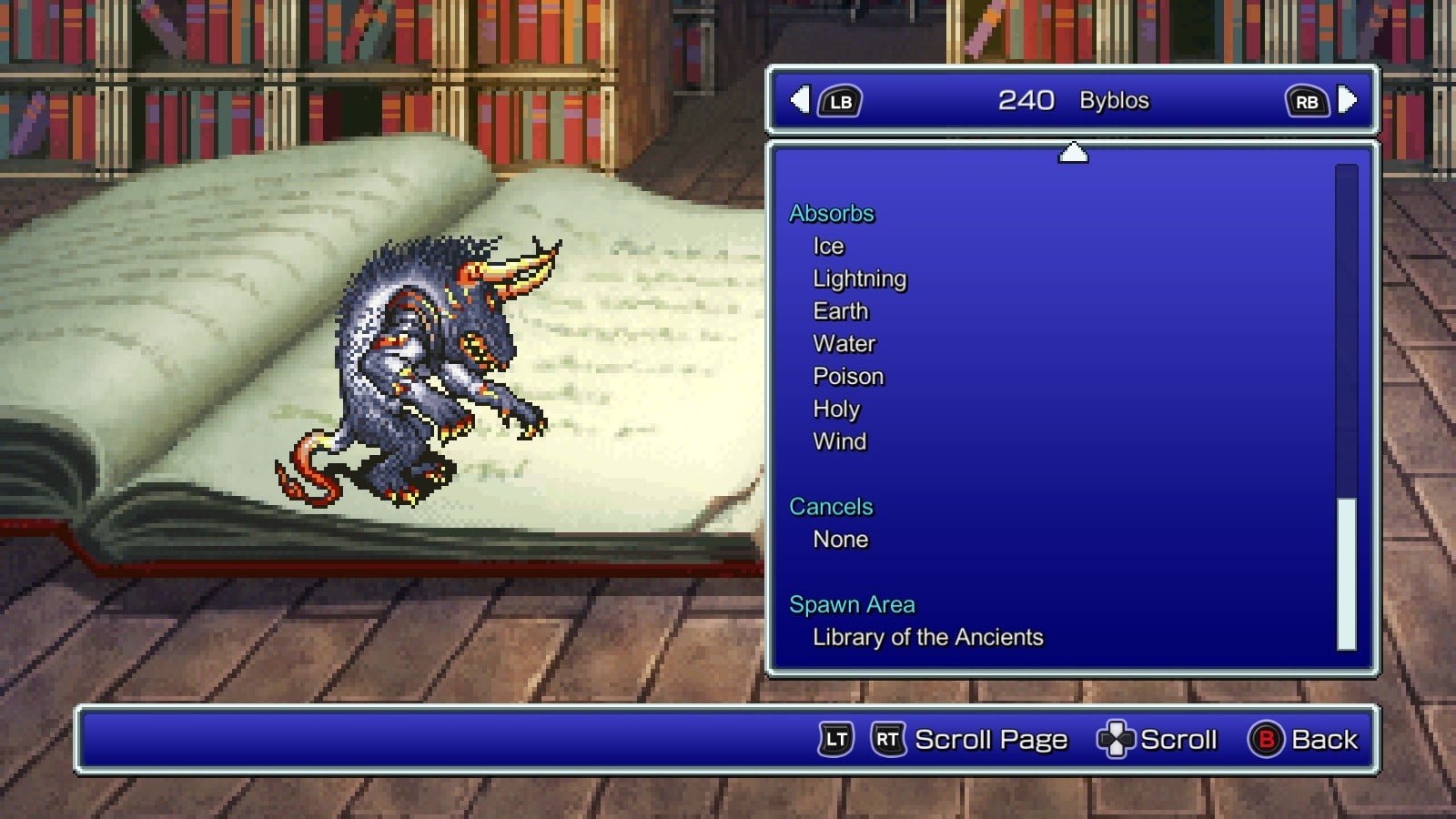 Another ability with limited viability. It’s fun to watch the hammer bonk enemies. 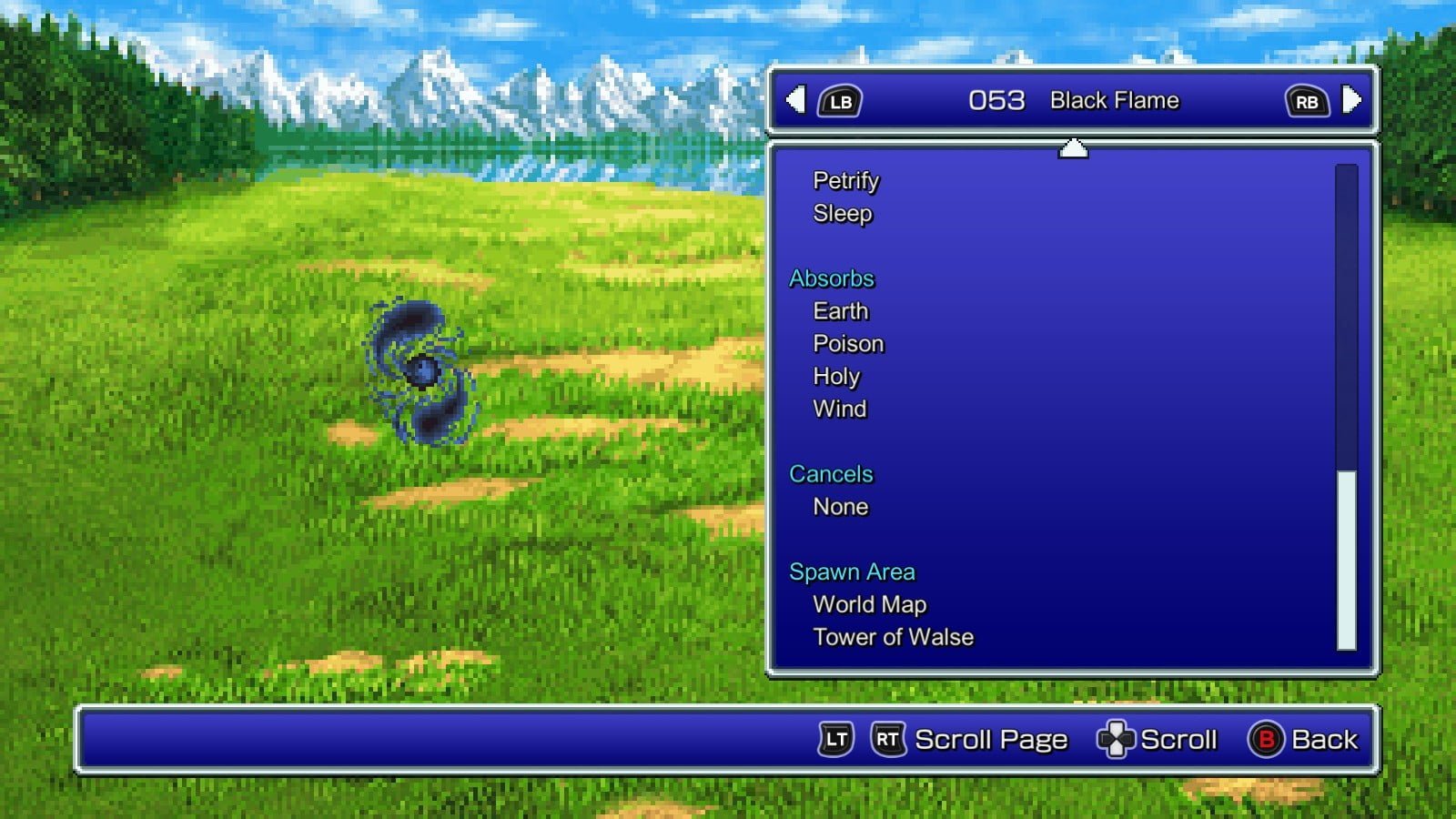 Really helpful ability for learning other level-based abilities when you don’t have anyone in your party of the required level. 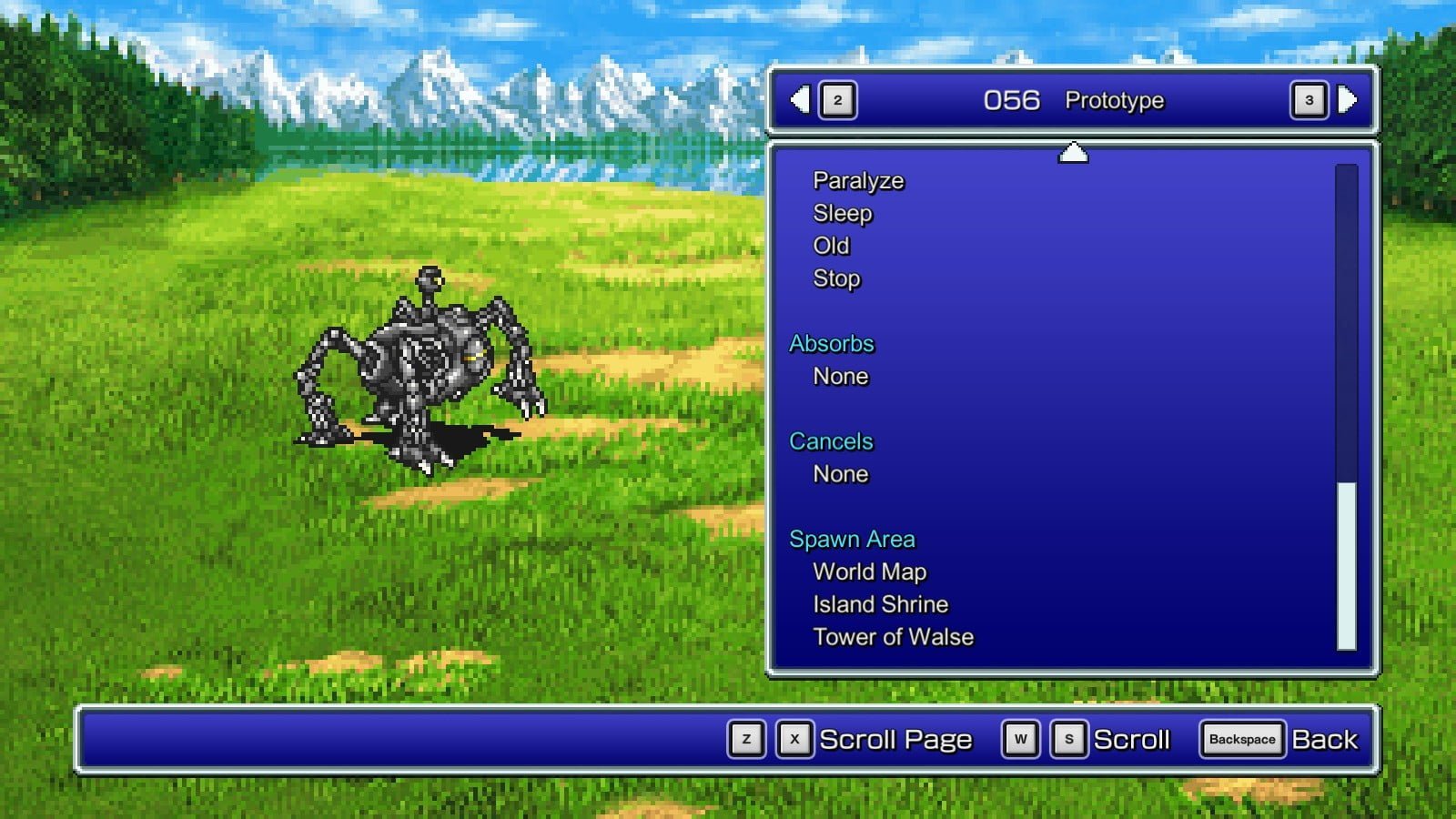 Engulfs one enemy in flames.

Earliest enemy: Prototype
Location: The second island south-west of Crescent Island (next to the one with Black Flames).

Great low-cost ability with medium-ish damage for general combat. Highly recommended using a Beastmaster with !control to learn the ability as well as survive the battle. 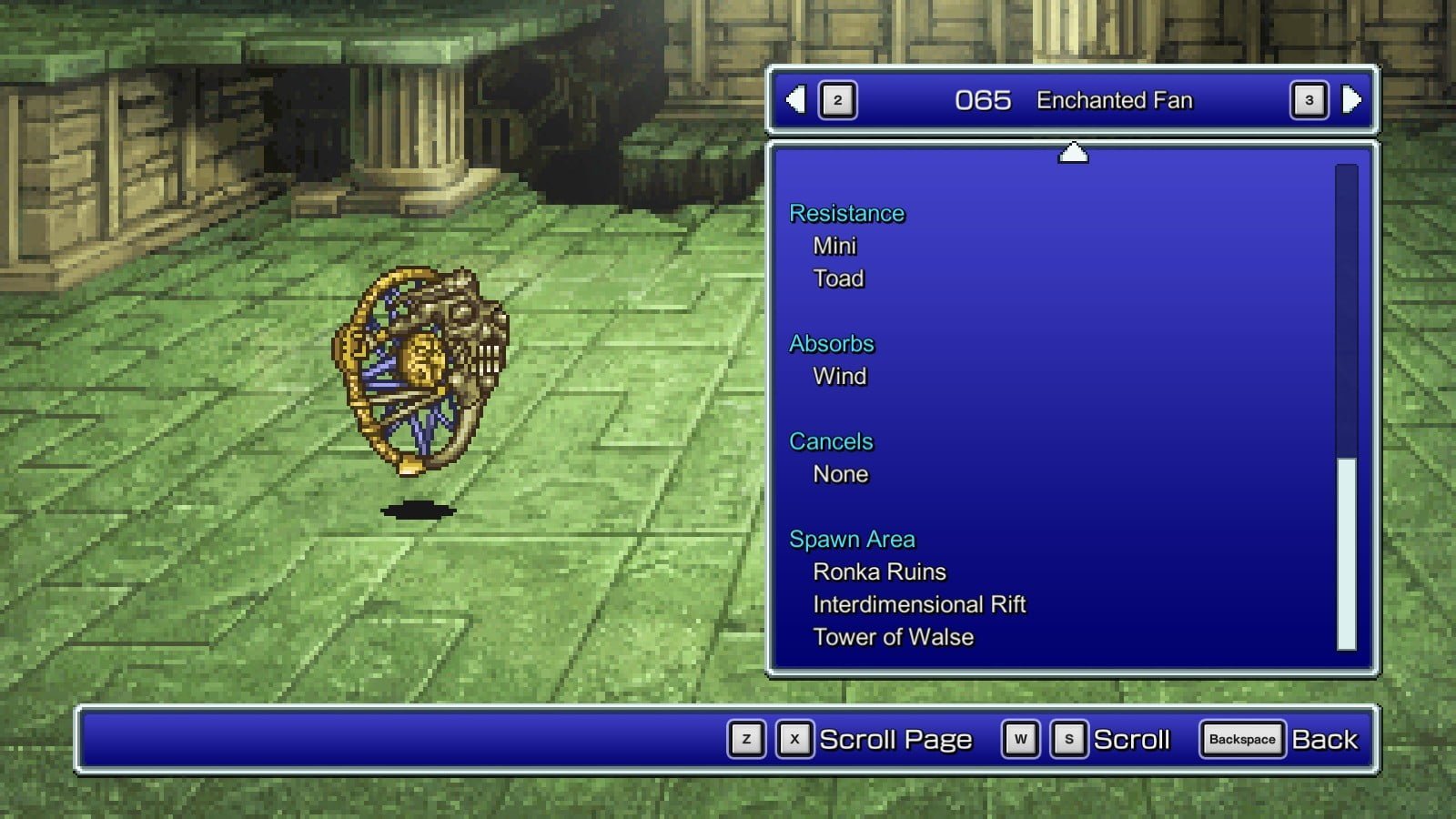 Restores each party member’s HP by an amount equal to the caster’s current HP.

Awesome healing ability that remains useful through the end of the game. You’ll need a Beastmaster with !control for this one. 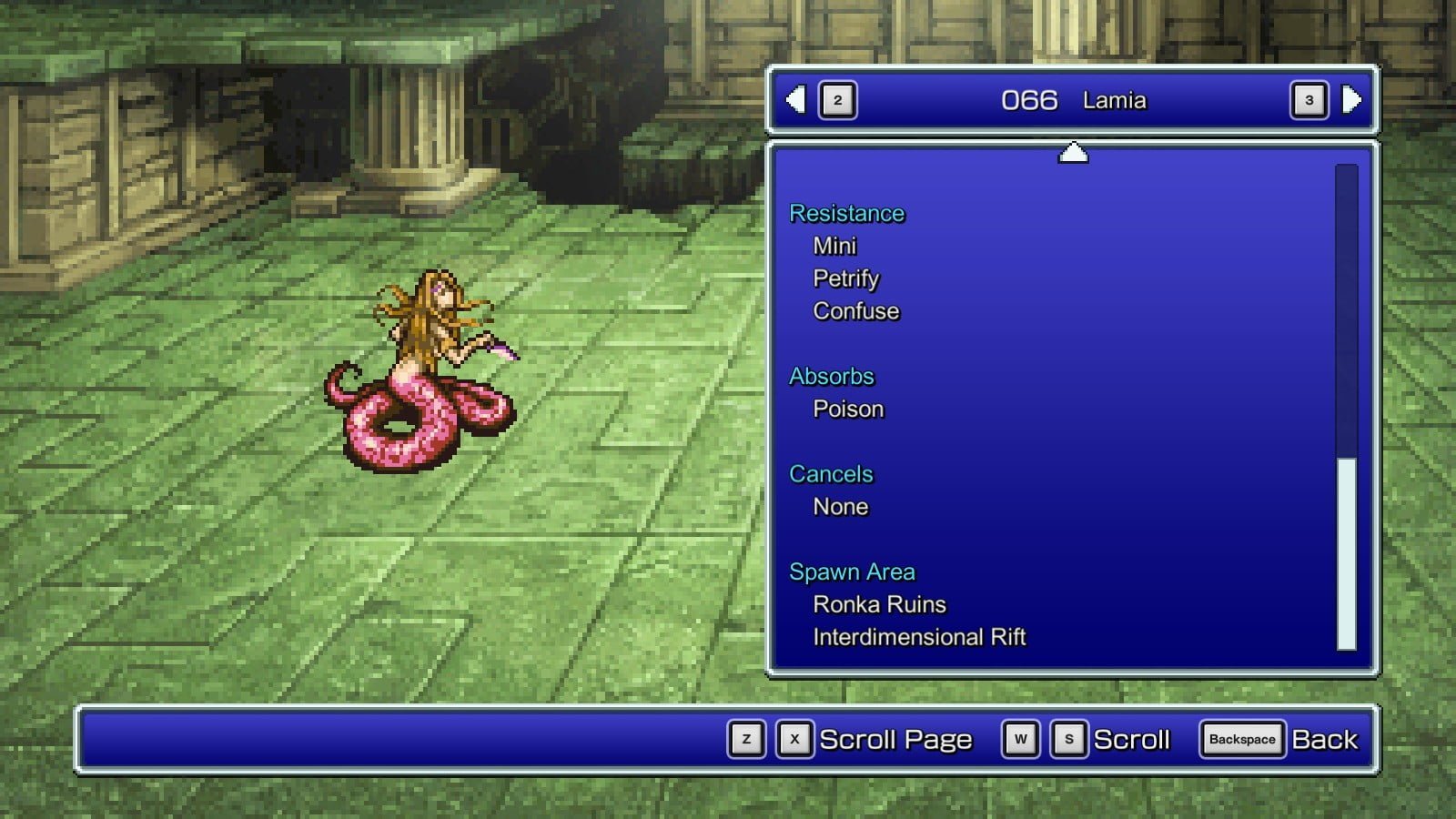 Extremely useful ability that trivializes boss encounters for the next few hours of the game. You’ll want a Beastmaster with !control to get this if you don’t want to get hit for 1,000 damage more than once. 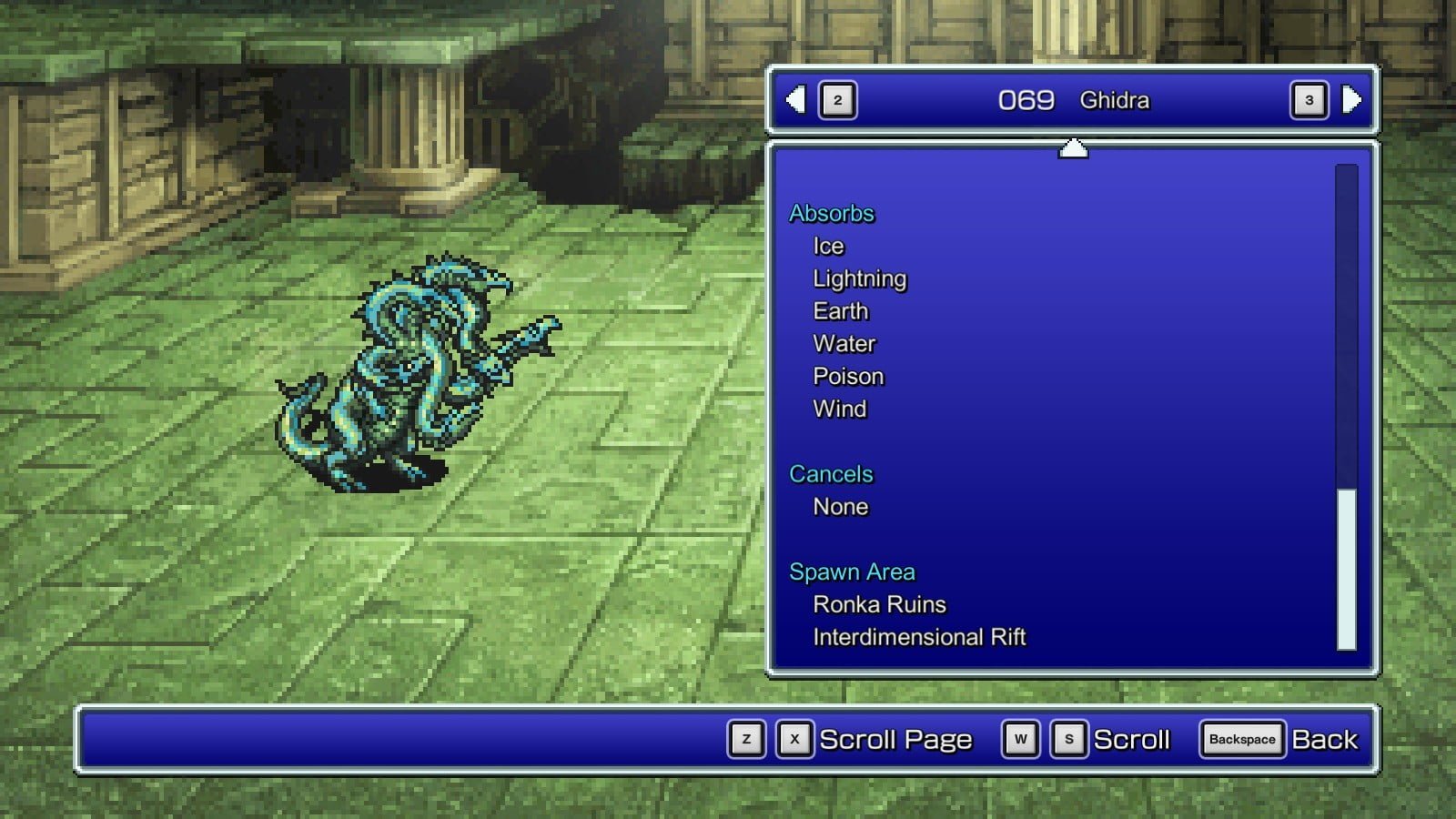 Hits enemies with levels that are multiples of 4.

Not a very useful ability and not very easy to get either. Ghidra is a rare encounter in the room adjacent to (the left of) the room with the boss of Ronka Ruins. If you don’t have a Blue Mage at a level with a multiple of 4 then use Dark Spark until you do. 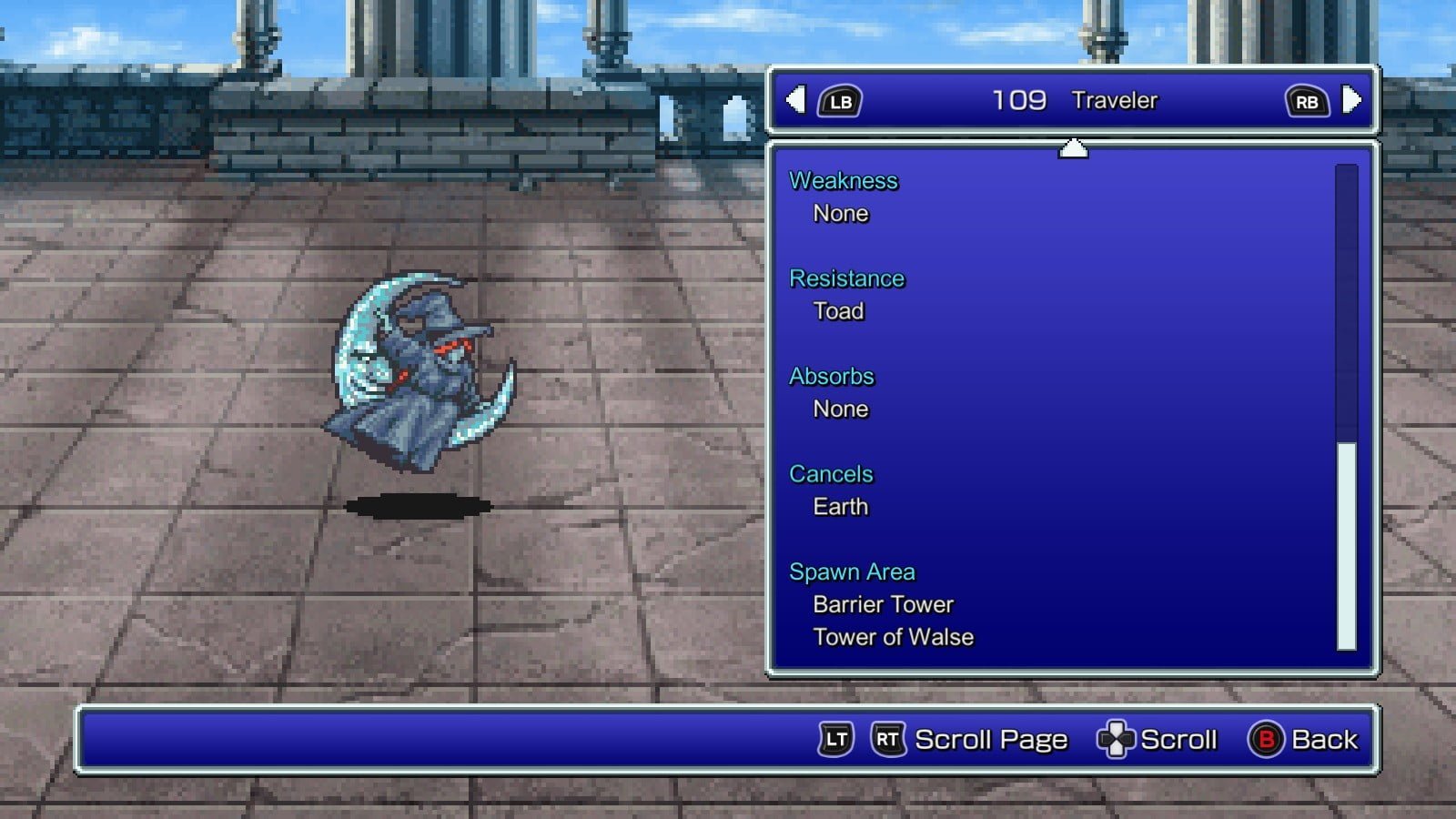 Inflicts one enemy with sleep, and causes it to age.

Easy enough to obtain without !control. Gives a useful combination of “old” and “sleep” at the same time. 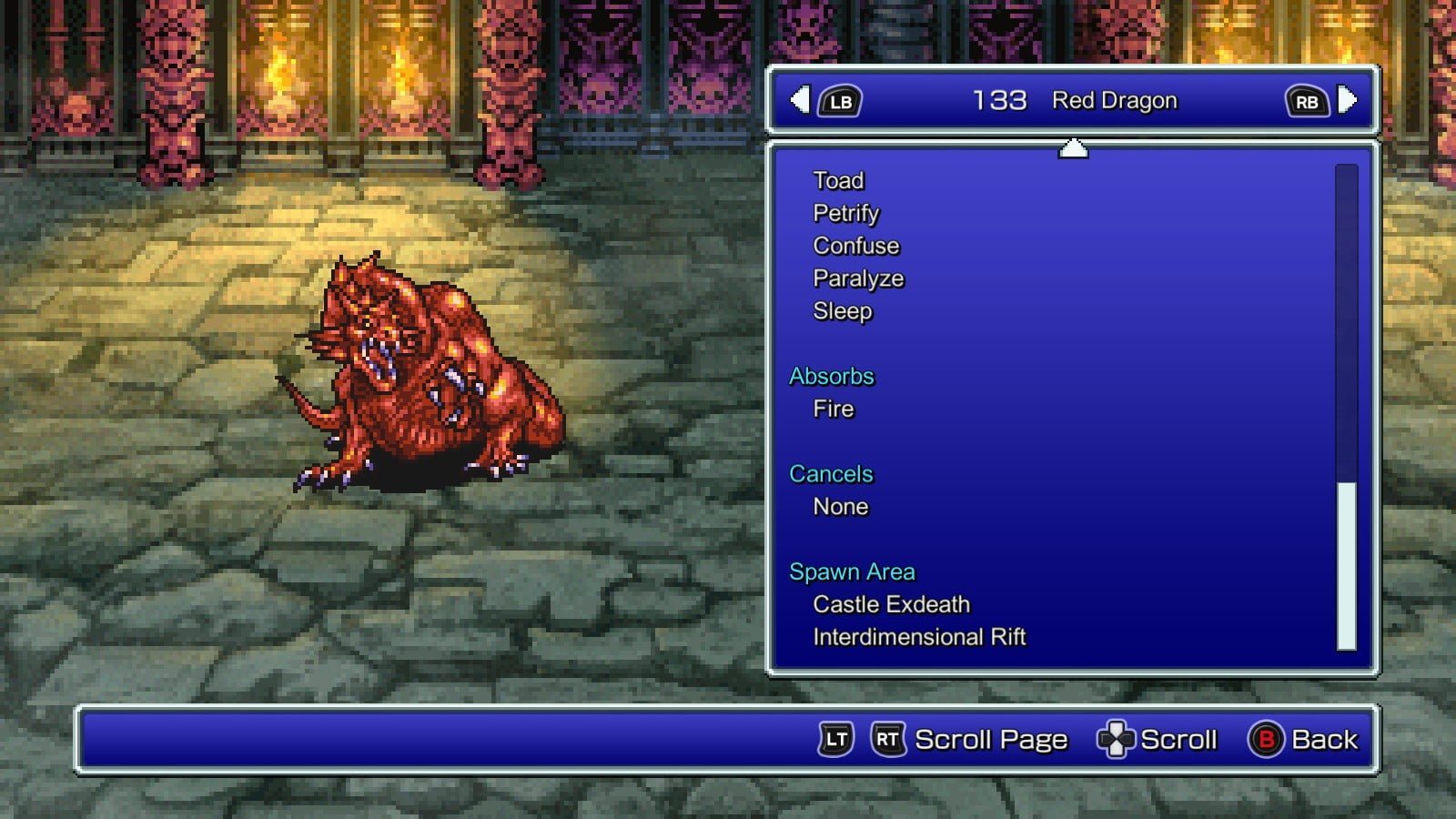 Hits enemies with levels that are multiples of 3.

This one will take some preparation! The ability will only hit someone with a level with a multiple of 3, but to make matters worse Red Dragon does not cast this naturally, nor can you target your own party even with !control. 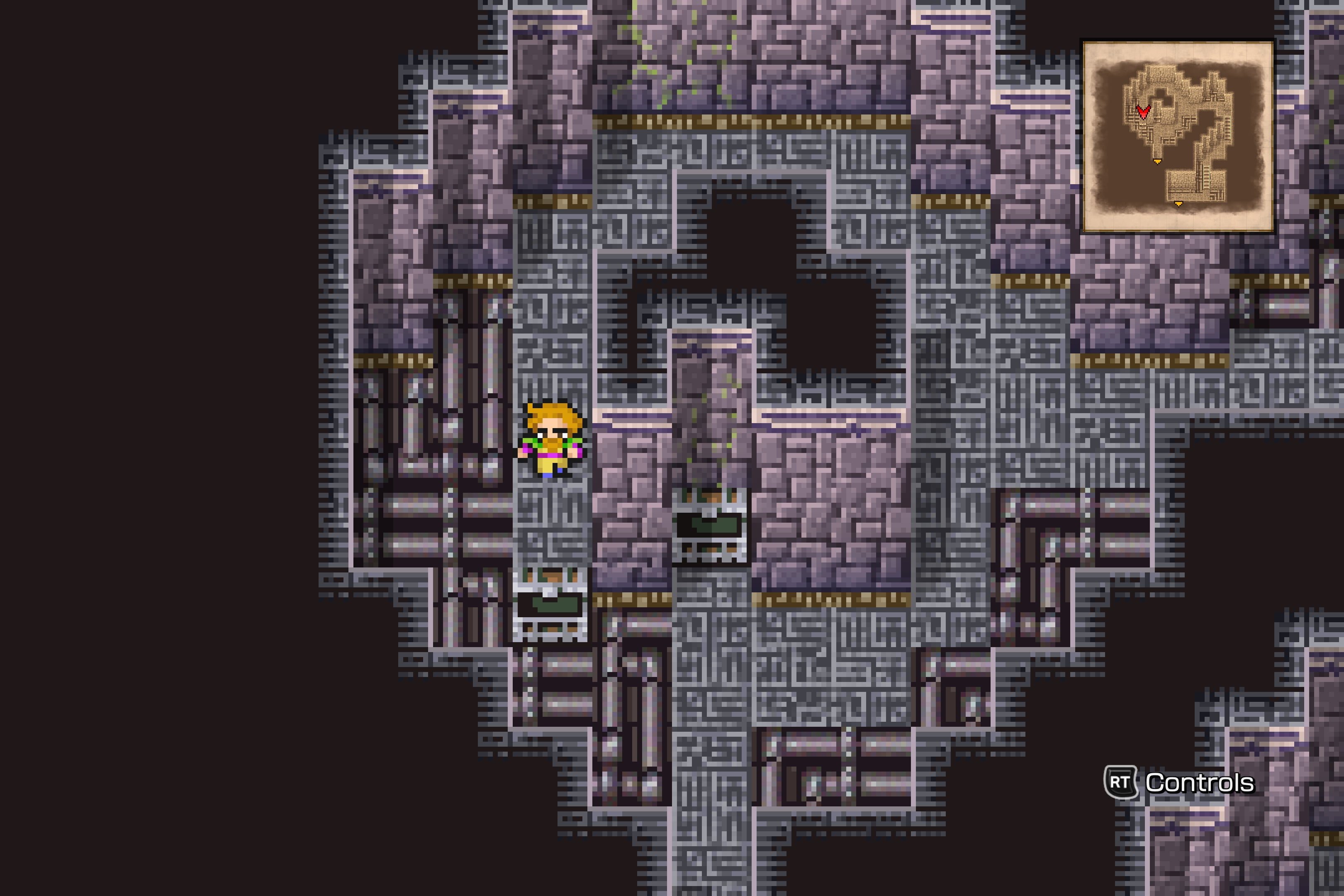 Here is what you will need to get this ability:

Once you have all of the above, you’re ready to learn some blue magic!

It can take a few tries to hit the right party member and you may need to restart from your Quick Save file if reflect wears off. Once you’ve been hit by the ability you can wait a few rounds for reflect to disappear and have Red Dragon kill itself with Level 3 Flare. 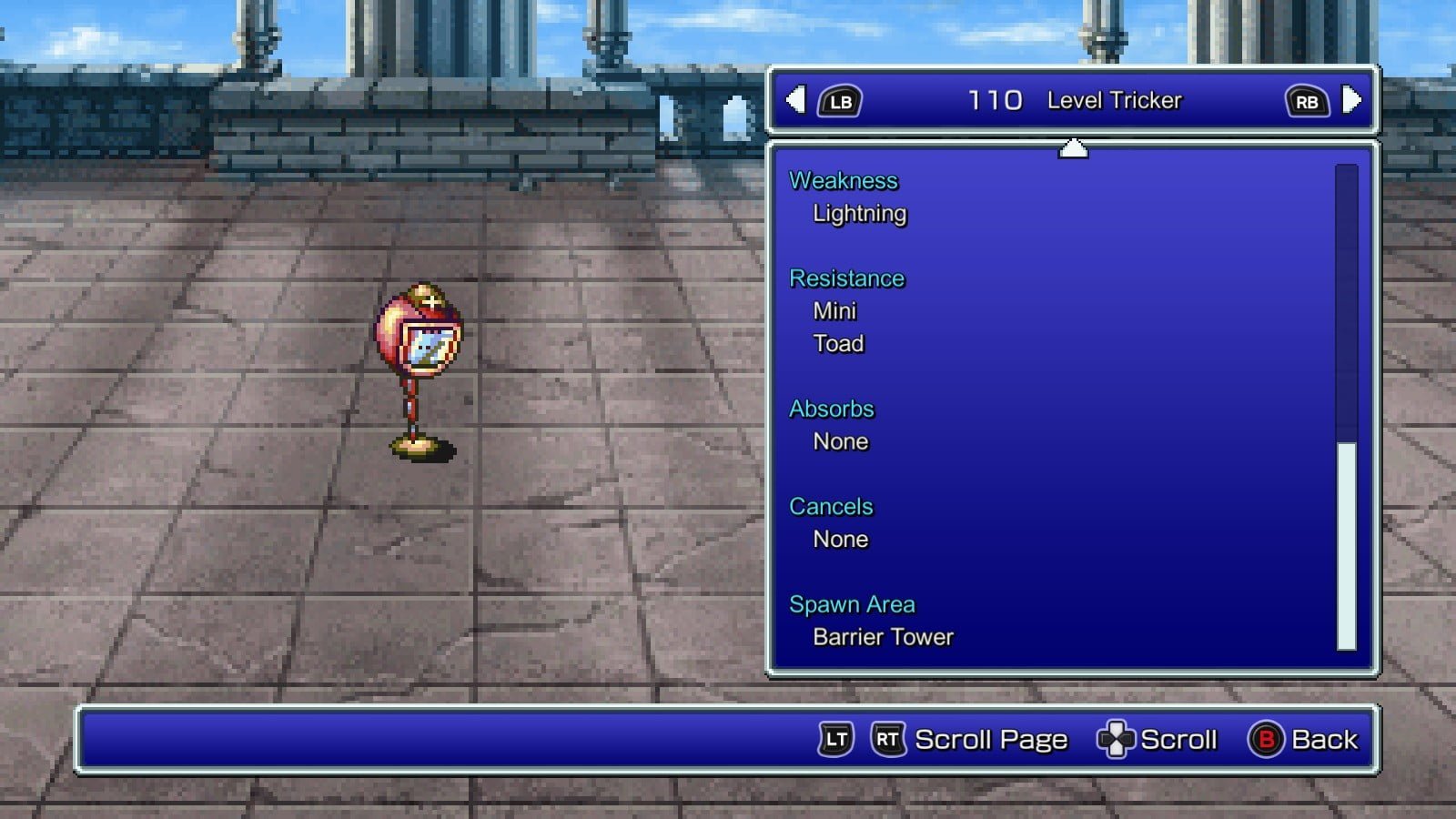 Hits enemies with levels that are multiples of 2.

Similar to Level 3 Flare, Level Tricker does not use this ability naturally and can not target your party when using !control, so you will need to follow the same steps of mixing a reflect potion with a Dragon Fang + Pheonix Down, then bouncing Level 2 Old onto your own party. 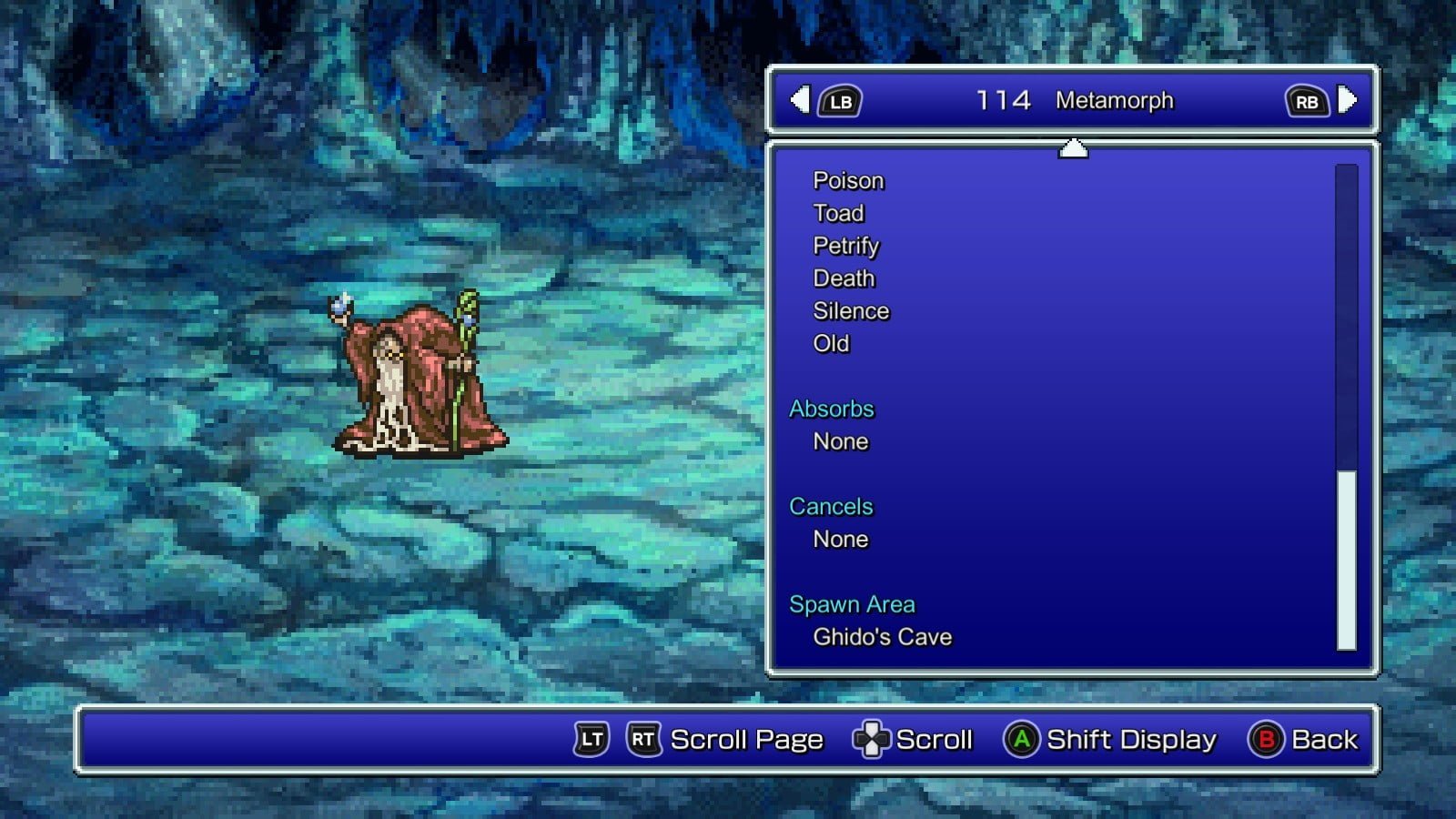 Best version of the wind spell Aero! Does a lot of damage and worth getting as early as possible.

Metamorph in the Pixel Remaster version of the game seems to have a few transformation “scripts” it cycles through, and you need the one that begins with Enchanted Fan. So if Enchanted Fan is not the FIRST enemy it transforms into, either kill it or run away (or spend an hour for nothing like I did).

If you get tired of grinding Metamorph, keep in mind the next boss has a wind-based enemy (no spoilers!) that will use this on your entire party when they get close to dying. 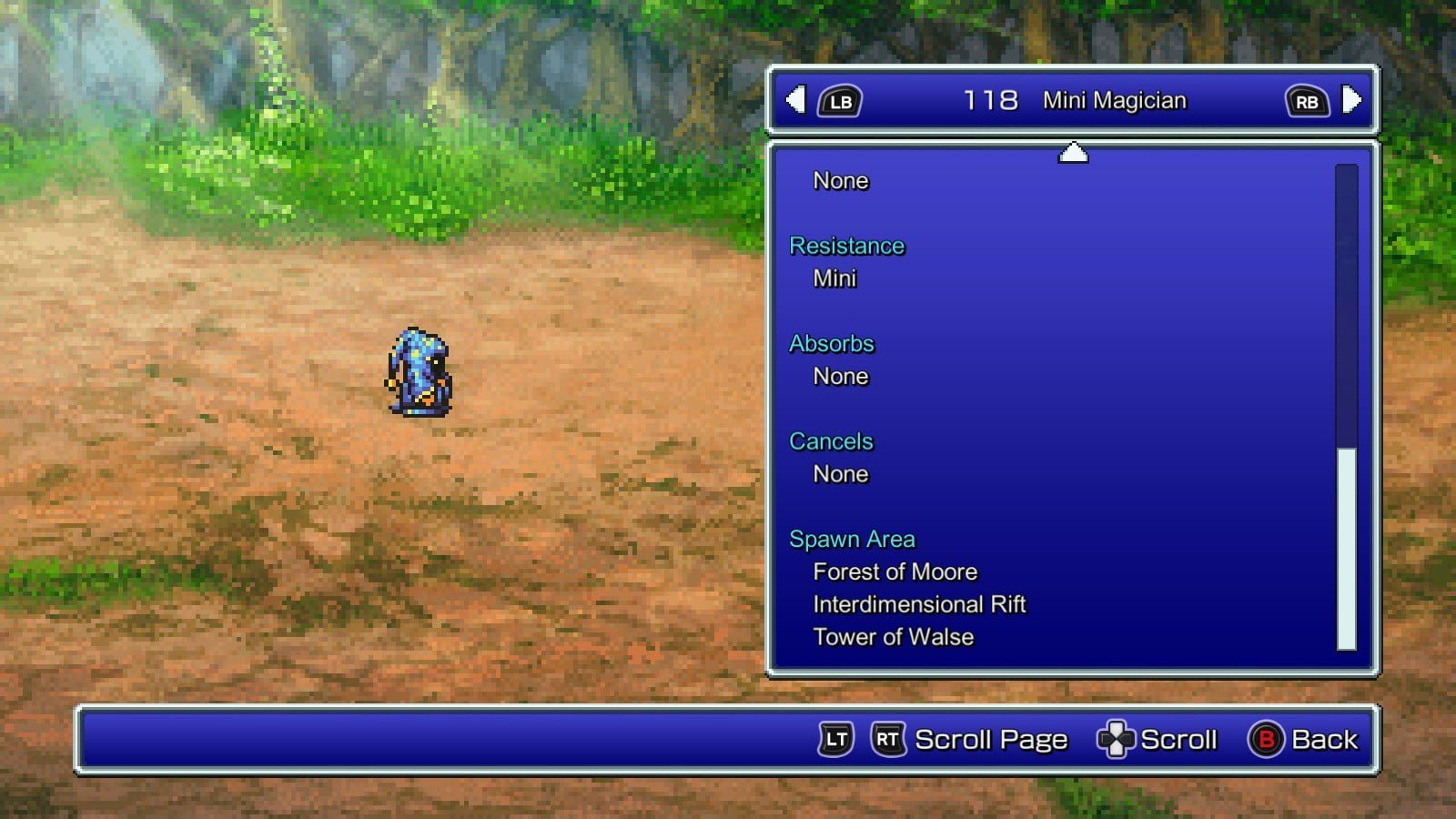 Not likely to see much use in combat. Luckily this is an easy one to get and doesn’t require !control for once.

Curses one enemy to die in 30 seconds.

Not a great spell. But lets collect it anyway!

Will only cast this while health is above 50%. Because Doom is often the first ability he uses and his spells hit so hard, I would recommend bringing a Time Mage and casting Return every time he hits the wrong party member. I was able to get this after about 20 retries.