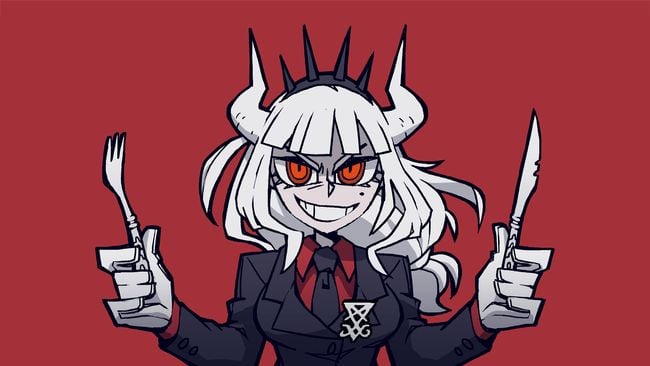 Cerberus is the the third Demon encountered in Helltaker, and although Cerberus has three bodies, there is only one soul living within and controlling all three of them. They are referred to as “The Triple Demon.”

Cerberus, like most of the Helltaker cast, is depicted as a short demon girl with pale skin, red irises, a black arrow-tipped tail, and silvery-white hair; however, in her case, she is represented as 3 girls rather than 1, although these traits still apply to all three. Since all three are identical, any descriptors applied to one of the girls apply to all of them.

While not possessing horns like the rest of the demons, they instead have white canine ears that emerge from under their hair on the top of their heads; They also all have canine teeth, as evidenced by the small fangs present in their mouths in their idle sprite. Their eyes are very large, rounded, and wide, invoking an enthusiastic expression. They have parted fringes and their hair stretches all the way down their back, where at the end it is tied via hair tie into a short “tail”.

Cerberus, upon first meeting in the Underworld, is one of the more excitable demons with a “happy-go-lucky” attitude, as evidenced by their almost always smiling sprites and their enthusiastic dialogue. Cerberus, while at first seeming relatively innocent compared to the rest of the demon girls that join the Helltaker’s party, they are very quick to reveal a more sinister or savage side of themselves, albeit while retaining their cute, seemingly harmless appearance.

When joining the party, the triplets all express their excitement to finally be able to “corrupt the mortal realm.”; At the same time, they also infer that they have no hesitation in tearing the Helltaker into pieces if he asks questions about bringing them to the normal world.

When the Helltaker first encounters Cerberus at the end of Level 3, the triplets express their surprise at the appearance of a “real human” in Hell, and ask the player to take them with. The player is given two options to respond with:

If the player picks the first option, the triplets rejoice, eyes widened. They exclaim that it is finally time to corrupt the mortal realm. Cerberus joins the party and the player receives a “SUCCESS” prompt, advancing on to Level 4.

If the player picks the second option, Cerberus delightfully explains that, although they need a human to cross the Hell’s Gate (for unspecified reasons), they don’t need you to be in one piece. The player is given a “Bad End” screen, which says “They jumped you like rabid dogs. Canine sounds included. The cuteness of it all gave you a heart attack.”