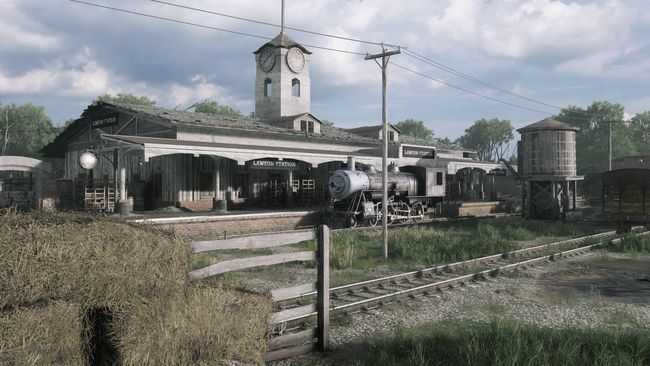 Hunt: Showdown is a competitive first-person PvP bounty hunting game with heavy PvE elements, from the makers of Crysis. Set in the darkest corners of the world, it packs the thrill of survival games into a match-based format.

If you find yourself expending too many Hunt Dollars on recruiting equipped Hunters, Quickplay is a good way to get equipped Hunters and a feel for the game, in personal opinion. You can choose a loadout; random, pistol, shotgun, or proficient melee weapon. Scavenge the map for gear such as better weapons as you go, tools and traps, and shots. At the end, if you win the match, you keep the hunter and all gear you’ve acquired in that match. This is great for scaling through your first 30 ranks, since the gear ladder is consistent through Prestige levels. After rank 30-50+, you will start seeing better recruit options for free Hunters.

In-game tips tend to give enough information on this topic. But I will be more thorough.

Hellhounds: Can be snuck up on, and is most proficient to take out by melee, Knife or Bayonet preferably. Can also be killed with one shot to the head by any weapon.

Hives: Same applies as to that of a Normal Undead, but preferably aim for the head when attempting to kill. Hives release a Swarm if you trigger them. The Swarm can be rid of by two ways; run, or use a Knife or Dusters to quickly melee the Swarm away.

Immolators: These can be deadly to new players since many are used to shooting or stabbing. In your best efforts, attempt to kill these with Dusters, a Hammer, or a weapon equipped with a Mace. Shooting or stabbing these will cause them to go in a rage and set off a fiery explosion within a close distance that causes you to burn, as well as the Immolator will charge you and has a very high rate of attack.

Meatheads: Can be killed two sticks of Dynamite or one Bundle/Big Bundle of Dynamite. You can utilize red and yellow barrels nearby to kill them. If they are within close range of a red barrel, it will kill them instantly upon explosion. If they are within close range of a yellow barrel, it will burn them, and you can finish them off with more fire, such as use of lanterns or unloading your weapon on them. One note to take is that these Meatheads will charge at you if you are poisoned, either from their leeches or if you happen to be running away from a Swarm, so keep that in mind. These also deal the most damage of any other enemy NPC in-game and can kill you in just two hits.

Water Devils: Can be killed with ease by pump/single-action shotguns. You may encounter these often if you are crossing bodies of water. Try to avoid them by going around or further away from them, or if time depends on it. Run through and don’t stop. Triggering them from a reasonable distance will delay them by one second before they start pacing around in the water. If you get hit, know that they attack fast and deal bleed damage, so get to land quick and stop the bleeding after.

The best approach for killing these is with a 2h melee weapon such as an Axe or Hammer. These deal significant damage to any of the Lair Bosses, and offer stealth on the map, since you aren’t unloading non-suppressed weapons throughout the whole fight. An Axe will allow you three charged attacks, though a Hammer will allow only two charged attacks.

Lair Bosses cannot leave the location that they’re residing in. If they’re in a building, they cannot chase you outside. This offers your chance to kite. The most common method of killing these is to run in, melee it with an Axe or Hammer (or you may choose to unload your weapon – not recommended as you use up a lot of ammo, and the damage is not as significant), and run outside and take cover until your stamina can regenerate.

Camping is highly dreaded in this game but it is up for players to dictate the choice of combat. Depending on your equipment and theirs, one may have a better advantage over another, whether you’re approaching a Bounty or securing it. Make sure you have a good headset, and have your volume up. This game is highly dependent on hearing as it is seeing. Footsteps can give off enemy positioning, as well as listening in if they climb ladders, open doors, or place traps. Find a good approach, and determine what playstyle might work better for you. Do you sneak up on them? Or do you charge in on them?

If you are sneaking up on a Bounty, watch for windows and open spaces. Always seek cover and listen in for movement.

If you are charging in, know all entry points, and layouts of the structure you’re approaching (you will learn the maps the more hours you put into the game).

This game is dependent on skill vs. skill. A great way to rid of campers is Hive Bombs and explosive devices such as Dynamite and Dynamite Bundles, Frag Grenades and Sticky Bombs. Tossing these in a structure that your opponent is hiding in is enough to make them at least move to a new location, and that is where listening comes into play again. Consider these things.

If you are securing a building, reverse it. Know the layout of the map. Be cognoscente of bushes. Other structures such as fences and other objects. In some cases, you can see enemies though bushes or fences. You might notice movement, or coloration that doesn’t match the rest. Secure doors and windows with Bear Traps or Trap Mines such as Alert or Concertina Traps. The best way to secure a building is to throw a Concertina Bomb on a stairwell or an open doorway. This gives your opponent something to have to slash at to get into a area depending on their pathing, or have to waste something like a dynamite stick to clear it. Use this as an advantage.

You can use E to use Dark Sight and locate the Bounty if it’s activated or if a player picks up the Bounty, they are marked on the map with a lightning bolt animation. You can track these players down on the map or by using Dark Sight.

In Bounty Hunt or Quickplay, you can sometimes find yourself spawning within the same area of another team or player. This implies the use of stealth, but if you are confident in your skill or loadout, you can always choose to oppose in the first hand. In some cases, you’ll find yourself reaching the same first location as another team or player, and depending on which game mode you are playing, this can determine which method of approach you choose to go with. As said, your skill or loadout can determine this, since for one instance, me and another player of high Prestige both died within the first 3 minutes of the game. I wandered to the first location assuming nobody would be nearby or within eyesight. I had begun climbing a ladder and found myself shot in the head with a Springfield 1866. My duo was also shot just a minute later from the same enemy.

1) Cool down, gun-slinger. If you are new, understand that veteran players find gun-slinging at generic undead annoying. If you unload your weapon (non-suppressed) at every undead you see, you might anger your duo if you’re in a duo queue. Unloading your weapon can let opposing players know your location on the map, because ANY weapon that is non-suppressed can be heard within the map, no matter how far UNLESS you’re underground, such as the catacombs at the church, then your shots are muffled.

2) Turn off the flash. Remember that most players choose to be stealth and tactful. Running around with your flashlight on can be seen from afar, and can also tear your ability from seeing enemy players – but they can see you. I would say that this would be the single-most useless item in the game, but of course it can be there to serve any purpose that a player might need, and perhaps you might have poor eyesight and need it.

3) The more, the merrier. The more kills you have, the more XP you receive at the end of a match. This includes creatures and enemy players. If you can’t secure a bounty, your duo permanently dies or disconnects from the match. Try to kill as many creatures as you can before deciding to extract. You might have found your time was wasted but you can make it worth-while in some cases.

4) Object control. Always be aware of your surroundings. Lit lanterns or light-posts can be shot and cause a small fiery explosion in the area and can affect anything near or under such. Barrels shot once can cause a 3s timer until explosion. If the barrel is shot twice consecutively, it will explode on the second shot. This is useful for enemies or creatures near these.

5) Medic! Always try to carry a Med Pack OR 2-3 Vitality Shots. If you find yourself queueing for duos and your duo constantly leaves, it might be that they are seeing if you are carrying anything to heal yourself if you receive damage. These are obviously helpful in-game if you receive a heavy blow from a bullet or attack. Carry these on you so you don’t have to scavenge for one in-game.

6) I quit! Understand that feeling that some weapons are over-powered can be discouraging. Most players, especially in the discussion threads tend to complain about the Mauser C96 (Dolch 96) and the Mosin-Nagant M1891 Avtomat. The Dolch 96 is a semi-automatic pistol, as the Avtomat is a fully automatic rifle. These weapons are often spammed without the thought of precision and you can usually shut down an enemy who has these with a CQB or a precise shot of a Sparks LRR or other high-end rifle. As you become more adapt to the game, you will understand that placement and playstyle are huge. Understand when to engage a fight. Understand your confidence and skill. Understand the efficiency of another player and the use of their weapon. Learning is earning. Most weapons used against you might seem powerful, but soon yourself, you will be able to unlock and use them as well. Some of the high-end weapons are unlocked at high-end levels, but some of the early weapons can keep just as much pace as these. Plus, imagine you shut down a player discharging their Dolch or Avtomat with a single shot of a shotgun, or a headshot. It will feel good, trust me.

You can determine another player’s loadout often by their first shot. A powerful single-shot can call for them having a single-shot rifle. There are lever action rifles such as the Winfield and bolt action rifles such as the Lebel, which can be shot consecutively, but have a pause in-between shots. If a player is carrying one of these, their tendency to miss the first shot will result in them weapon-swapping to a secondary pistol. Since weapons are slotted in three categories and can only be paired with certain other weapons depending on if you have a perk that allows against this.

Hope this helps. I know this is more of a lengthy read, but this is my best advice as far as playability and experience of the game.