Why are we still going for achievements in the fourth game? Just cause.

Rico was Here
Earn all Just Cause 4 Achievements

Just do everything. Easy, right?

You’ll get these just playing through the story in Just Cause 4 or doing other side missions.

Allow Me to Introduce Myself
Help Sargento with his ambush, meet the mysterious Javi Huerta, and visit Garland King on set

In Just Cause 4, you do side missions for three different people. You’ll get this after meeting them all for the first time.

Complete all of Garland’s side missions. Marked with a G on the map.

Complete all of Javi’s side missions. Marked with a J on the map.

Complete all of Sargento’s side missions. Marked with an S on the map.

Just do things and you’ll get progress for this.

Bring It Down!
Finish Operation Thunderbarge

Complete the main story missions for controlling the lightning storms. Marked with a lightning bolt on the map (achievement icon).

What If I… Dive Down?
Finish Operation Windwalker

Complete the main story missions for controlling the tornado. Marked with a tornado on the map (achievement icon).

We Put a Giant Gun on It
Finish Operation Sandstinger

Complete the main story missions for controlling the sand storms. Marked with a wind gust on the map (achievement icon).

Wanderlust
Discover 50% of all discoverable Locations

Been Around the World
Discover every Location in the game

You’ll just get these by traversing the map and actually exploring all over the place.

Like in the previous game, you’ll have to go find the highest point on the map.

Do All Things Achievements

There are a whole heap of things to do, and you’re gonna have to do them all. Sorry.

Show Me the Way
Uncover every Ancient Statue

…The Harder They Fall
Destroy every Surveillance Airship

You’ll find these flying the skies of Solís and they need a whole lot of damage to take down. If you can find an RPG Launcher somewhere nearby, even better.

By completing side missions for Garland, Javi and Sargento you’ll earn some gears to unlock grappling hook mods.

We’re in Business
Secure every Factory

Some of the map regions have a factory. When secured they will give you different benefits. You’ll get them all as you go for securing every region.

Here to Stay
Secure every Region

By completing missions, you will gain squads of recruits which you can use to secure different regions from the world map. The number of squads required to secure a region is displayed on the map and can be reduced by securing adjacent regions.

You’ll have to finish a short mission in a region before you can secure it. A few of them are getting these weapons blueprints.

Bomb Disposal
Remove all rigged vehicles from the harbors of Solís

You’ll have to finish a short mission in a region before you can secure it. Three of these are driving vehicles rigged to explode into harbors. Despite the achievement wording, you don’t need to sink them ALL, you just need to complete the missions. (Thanks EliteSheep)

You’ll have to finish a short mission in a region before you can secure it. A few of them are getting these supply drop blueprints.

Stunts are the equivalent to Challenges in the previous game, but are just found in the world rather than having to actively start them.

I Feel the Need…
Film every Speed Stunt

These require you to pass through a ring while going over a certain speed in a vehicle. Even though some stunts are clearly designed for certain types of vehicles, you can still use other types to get it easier. For example, here is a ring I got with a helicopter, even though it’s clearly designed for a boat. 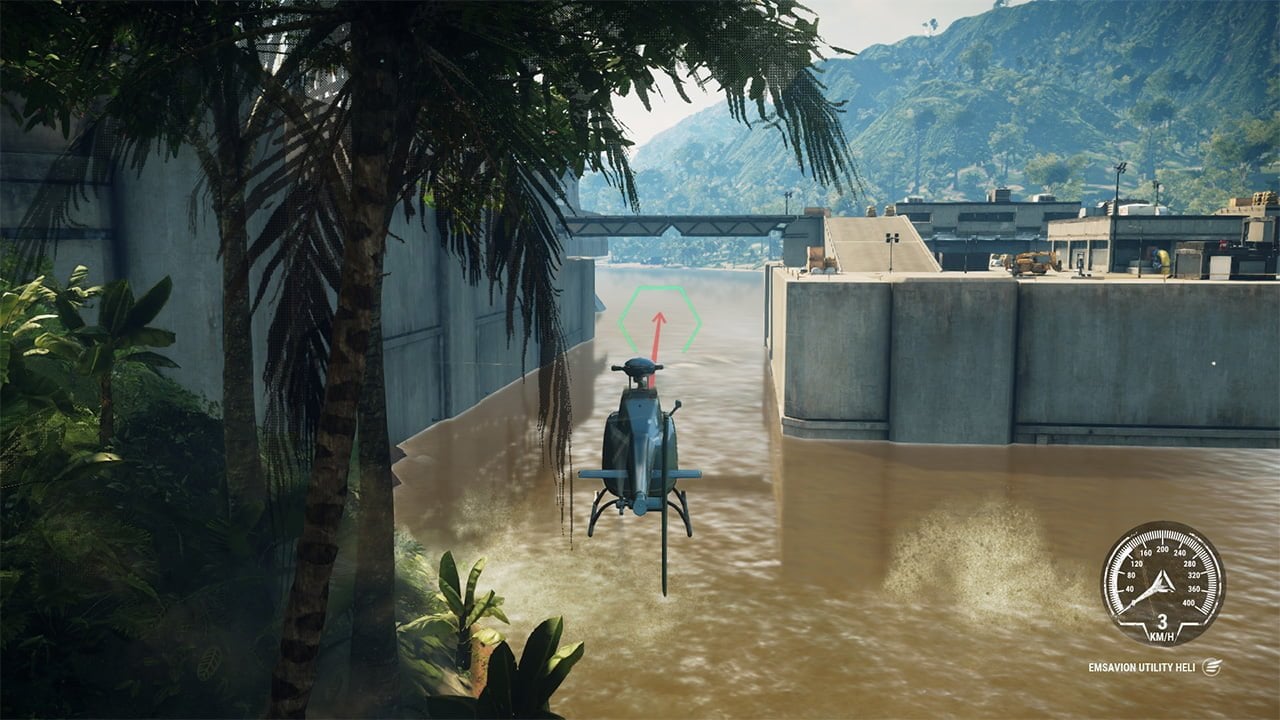 This one requires driving/flying through a ring using a certain vehicle. The vehicle seems to always be available nearby, though some seem to be a bit further away.
Like for this one, the vehicle was outside the compound and I had to drive it through, to the bridge in the center. 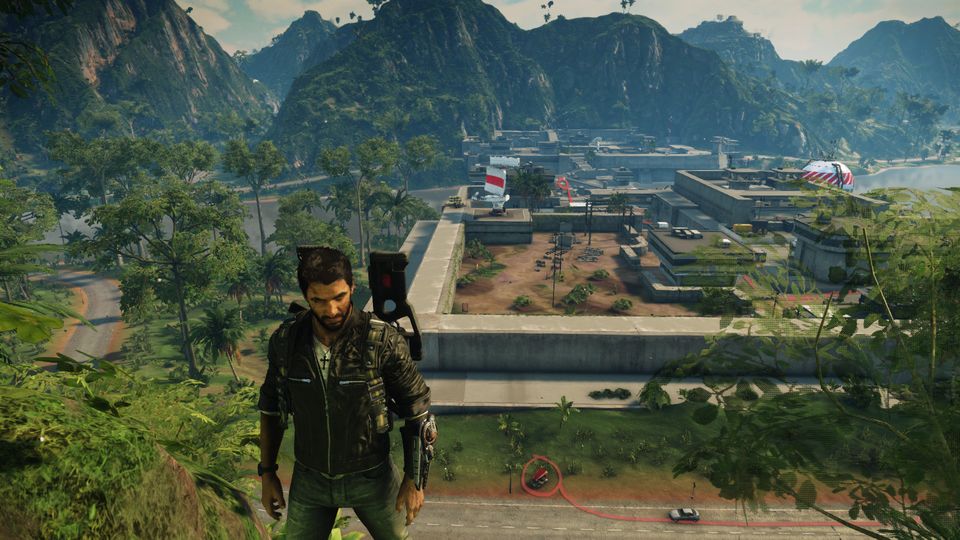 All the Right Moves
Film every Wingsuit Stunt

For the Wingsuit Stunts you need to fly through a bunch of rings in a row within a certain time limit. This time limit can be anything from 3 to 18 seconds. These stunts are often found near mountains, but you’ll also see them in cities, between buildings and through underground tunnels.

Feats are certain things you can do that get tracked. i.e. Consecutive headshots, time without taking damage, longest ragdoll etc.

This one can be pretty easy, but you need a friend who plays the game. You can see the Feat scores of your friends as you do them or in the menu.

Go to the Feats menu (same sort of place as grapple upgrades and the map) and find a Feat that a friend has scored on, but it pretty easy for you to beat. For example, I chose one for Time Flying with Wingsuit without taking damage, since you can basically do that forever.

You’ll have to track one of the Feats through that menu, then you’ll get this achievement when you beat your friend’s score.

Know My Name
Get on the Leaderboard for every Feat

Tricky due to the number of Feats. You can see them in the Feats menu, under a whole heap of categories. Any that have 0 seconds or 0 zero kills or something are most likely incomplete. Just get a minimum score on each one.

Here are a few I didn’t get for a while:

Sail in a sailing boat at over 40 knots
I just put a couple boosters on the back and got this instantly.

Character traveling a distance from being boosted
Just grapple some enemies and boost them over the place.

Character traveling a distance from being ballooned into the air
Just grapple some enemies and send them flying upwards.

Headshots with a shotgun without leaving precision aiming mode
Pretty self explanatory. Plus you only need a minimum of 1 headshot, so…

A Higher Love
Use only the Air Lifter for 15 non-consecutive minutes — Booster and Retract can’t be active!

Lift Off
Use only the Booster for 15 non-consecutive minutes — Air Lifter and Retract can’t be active!

Classic Hits
Use only the Retract for 15 non-consecutive minutes — Booster and Air Lifter can’t be active!

These are achieved by using a certain grapple gadget for a 15 minute period as suggested. It’s passive, so as long as you have the one gadget solely equipped, then you’ll get it.
I didn’t try for this at all. You equip different gadgets as part of a tutorial, and I got them all pretty quickly anyway.

Seems like someone passed out or something while typing the description for this achievement, because you need to use the alternate fire/Ricochet shot on this shotgun. Most vehicles seem to get destroyed in a couple hits.

You can find this in weapon crates all over the place. 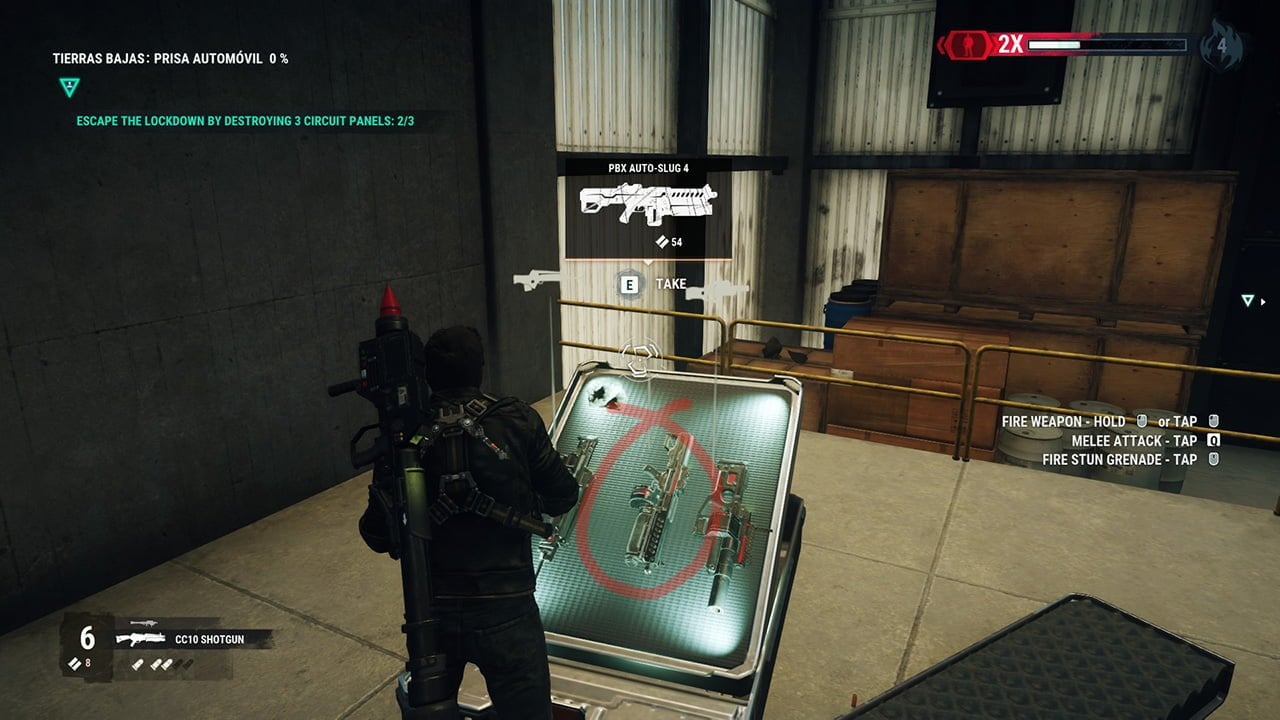 A Game of Chicken
Crash into a flying airplane with your own plane.

I’d recommend using a jet for this one, since you can just catch up to almost any other plane. You can just nick another plane with yours, and neither need to be destroyed or anything, they just need to make contact.

The Cow Gun is a unique weapon which turns the target into a cow. You’ll have to use it on enemies for it to count.

There are set spawn locations for this weapon.