A guide to setting up and using a shooting range at your base for extremely quick Crossbow training without having to micro-manage against opponents.

Introduction
So, I haven’t seen this posted anywhere in regards to crossbow training methods, as most threads where someone asks about it usually get answered with the leviathan method. So I thought I’d share what I’ve rigged up for super-fast crossbow training right at your base (wherever that may be), and I’ll try to explain it in depth so you don’t have to spend the time I did experimenting with everything and avoiding all the small issues.

The following method to training your ranged combatants has a few advantages:

1) There is no danger of being attacked by your target or any other opponent – it is safe.

2) You do not need to travel to an area with leviathans, nor build a base/outpost there just to train crossbows.

3) Is constant training, if done right, with no waiting between targets.

4) Is less micro-intensive, as you aren’t needing to move your characters every few seconds to avoid attacks, nor to find new targets.

There are two disadvantages when compared to the leviathan method:

However, past the mid-game profits from training aren’t as important, as you can easily make millions of cats just from your base production, and the setup procedure at the beginning is well worth the convenience of extremely quick crossbowmen training at any spot on the map.

Setting Up
Now for the actual method: the shooting range. This will require some late-ish tier technology, specifically the Outpost S-III design. The reason why is below. There will be three set-up steps to the shooting range:

1) You must first build said outpost. In it, you will be making your shooting range on the top floor. I recommend making the bottom floor a production area for toothpick bolts, but you can make it whatever you want/need really. You’ll want some cages in the range, and to set up a row of tables across the room, facing the cages (as pictured below). Leave a gap somewhere so your characters can still access the cage/target side of the room (I left an interior wall-sized gap on the far side, to be quickly filled later). 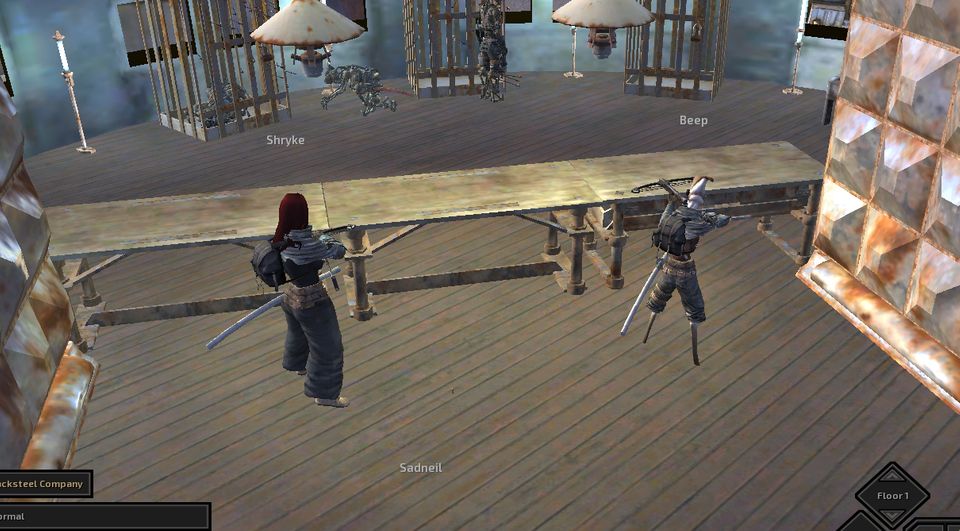 2) You will need some skeleton prisoners. You can either send out a squad to areas such as the Floodlands or Iron Trail (among others) to find and capture some Broken Skeletons, or, if you don’t mind a relations hit, just attack and capture any skeletons in any faction. I do, however, recommend using Broken Skeletons, as I’ll explain further down. You should only need two or three. Bring these skeletons back to your range, place them in the cages and equip them with the sturdiest armour you can spare.

3) Get a skeleton character of your own (not an enemy prisoner) and place them inside the cage side of the room. This is the step that requires the use of the Outpost S-III. Normally, as some of you might be aware of, but many seem not to be, you cannot “trap” characters behind interior furniture. If you try to trap them, they will teleport out to the nearest spot from which they can move freely. It is, however, important that the targets, and your own skeleton, are trapped on that side of the range.

The reason is, firstly, because this allows the building to be opened constantly (especially if producing bolts downstairs) without the skeleton targets escaping, and, secondly, if you collected Broken Skeletons, they will lock themselves into the “Retreating fast” action when released from the cage, and if they cannot escape they will instead just stand motionless (pretty good crossbow target). The reason, therefore, that you want the Outpost S-III is because you can trap them in that smaller area of the room without them teleporting out, using a trick. Leave an “opening” against the upper-most segment of the stairs, between the first and second pole (see image).

Fill in the gap you left for your skeleton to enter, while keeping this stair-way gap open, and the game seems to be fooled into thinking that there is an open path to escape, when in fact it is not usable. Set your skeleton to be passive, so they do not attack the targets (the targets won’t attack them due to the “Retreating fast” loop).

A Range to Call Home
Your range is now ready. Simply equip any trainees with the weakest tooth picks or junk bows you can find, fill their inventories with toothpick bolts, and have the skeleton of yours (the “range-master”, if you like) release one of the armoured captives, and have your men fire on it. When (eventually) that target goes down, have the range-master place them back in their cage, release another target, and repair the injured one. I prefer this over using a repair bed as he can stand in the area of their new target while repairing the last one, also levelling the shooter’s Precision Shooting, plus it gets the downed target back to full health and already caged, ready for its next release well before the second target also gets downed. This means constant shooting, no waits, no moving except to very occasionally replenish ammo (which is especially quick if being mass-produced downstairs).

Just shoot until a target goes down, release the next target while repairing the downed target, rinse and repeat. The constant shooting results in extremely fast levelling, and you can be anywhere on the map doing it.

I realise this is less viable for the early-game, as it requires some high-tier technology for the building itself, and also requires capturing several skeletons which may be difficult for weak characters. It also requires you to have enough members to spare a skeleton recruit becoming a full-time trapped range-master, and a few individuals producing the ammo constantly if you don’t want the training to have any breaks (takes a long time for a full backpack and inventory of toothpick ammo to run out, and should have made enough in that time to replenish it, if not, assign more bolt-makers).

I’m happy to answer any questions, or give more details about anything I may have missed. I just wanted to spread this method around, as I couldn’t find any helpful info while trying to assemble it myself, so this might save the next person some time.