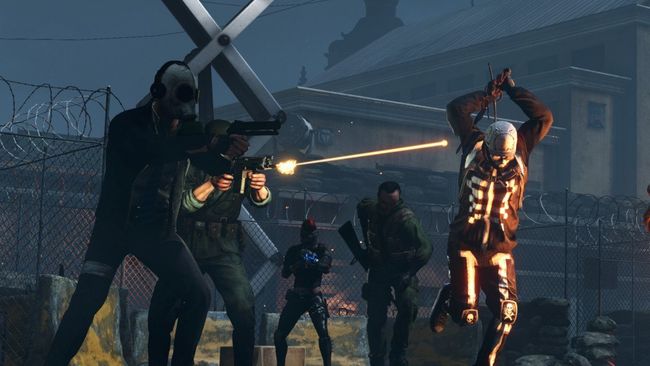 This guide will teach your various random tips that can help you survive longer in Killing Floor 2.

Advanced Tips for Starters and Veterans

Boomstick is a very cheap and relatively light-weight weapon. So carrying it with any perk is not a huge deal. Boomstick is a great utility weapon, which can do more things than just dealing some big amounts of damage.

If you hit middle mouse button (your special fire mode button) you can fire both barrels at the same time, which staggers Zeds and their attacks.

Not sure if it can cancel everything, but what’s good to know, that it can, for example, cancel Hans’ melee attacks. Those can prove fatal if Hans is at his final phase by then. Just fire both barrels when he’s close to you and just about to attack and you’ll stagger him and give yourself some breathing room.

Apart from cancelling attacks, you can also “boost jump” using the Boomstick.

If you aim directly below yourself at the ground and fire both barrels and jump at the same time you can jump higher than normal.

This can save you from various sticky situations, such as being stuck in a group of crawlers.

A weapon bash (V by default) is way more useful than some may think. Yes, it does pitiful damage, but it pushes Zeds away, which is very useful in tight corridors, since you’re giving yourself some breathing room and also preventing Zed’s grabs.

Apart from everything above, it also cancels Zed’s special attacks. Such as Siren’s screams, Bloat’s puking or Fleshpound’s pounding.

#4 Heal your teammates with syringes

What I mean by this, is if you and your teammate both have low health, it’s more efficient to heal each other than yourselves. The syringe’s cooldown recharges faster if you heal a teammate.

#5 Stay away from Armor in early game on easier difficulties

If you’re playing on Normal, Hard or even Suicidal (for seasoned players) and kinda know your way by now, it’s way better to just stay away from armor ’til like the middle of the game.

You’ll realize just how much you can save by not buying any armor. Unless you’re a player who dies repeatedly every wave it’s just not worth buying.

For beginning players: Do whatever suits you, buy armor every round, go for health skills or whatever.

For advanced players: If you’re someone who knows how to play, you should know this, always prioritize ammo over anything else.

For seasoned players I always recommend going for ammo and magazine based skills rather than health and defense. Since those are nearly useless on Hell on Earth.

Always only buy new guns if you know that you can refill enough ammo for it. Even if the gun is stronger, it is useless if you can’t fire it the whole round. Rather keep the weaker but refilled weapon.

If you want to conserve ammo and be accurate, always switch to single fire. Yes tapping the mouse like a madman might need some getting used to but it will be worthwhile.

Switch to auto or burst for larger zeds, you need to eliminate those ASAP.

Seriously, just get close to them, throw a flashbang in their face and spray their head. On Solo or easier difficulties, just one full clip is usually enough.

If you’re playing one of those perks who carry around a backpack full of ammo or grenades or whatever. DON’T stay near the trader, players then can’t use your backpack in the trading time, since the game prioritizes trader interaction over your backpack. They will get prompted to access the trader and not your backpack if you will stay too close to the trader.

#10 Learn the maps and run backwards

One of the best skills to acquire in Killing Floor 2, is learning the maps. If you know the map you’re playing, you also know how the routes look like and where are the objects that can block you. You can use this to your advantage greatly.

Always try to run backwards and let Zeds chase you while you’re shooting them. Doing this you can easily keep your distance while getting rid of melee based enemies. Of course you can’t just do this the whole round every round. Adapt to the situation and always think of this strategy when you think you can apply it.

If you’re at the end of the match, during the final boss trading phase, give away all your spare dosh to your teammates. You never know when they might need just those 100 to get full ammo and armor.

#12 Switch on your flashlight if affected by the Bloat bile

You will be surprised just how much better you can see if you do that.

Need to carry a bad team? Use some dosh and room to buy a Medic pistol. Unless you’re not already a carrying medic that is.

It’s extremely cheap and light but can greatly help stay your teammates alive.

Seriously, Sirens are the most dangerous small Zed out there. They render unmaxed Demos useless, they render your grenades and rockets useless, they ignore armor (thus rendering SWAT’s armor skill useless).

For the trouble they make, they’re very easy to eliminate. KILL THEM!

If you’re struggling with money or ammo. Always try to make the best out of your time.
Search for loot during the last remaining zeds. Let them chase you around the map while you’re scavenging. This way you’ll not waste any precious time during the trader phase.

Another great, cheap and light utility weapon. Just as Boomstick or Medic pistol, this is a weapon that is useful for any perk really.

You can easily clear small Zed crowds with a single blow.

This is a neat trick. If you have the needed SWAT perk skills, you can always start a match with SWAT selected. Let the skills give you full free armor, survive without taking any damage and then just switch to whatever perk you want to use.

This way you’ll always start with free full armor while playing just the way you want.