Quite a few of these cards require battling other students, there’s no specific cards you’ll need in order to defeat them. If you fail, just retry. They’ll normally give you the win anyways.

You do not need to complete the day in order to keep the Monstermon cards. You need at least 10 cards before you can battle other students. 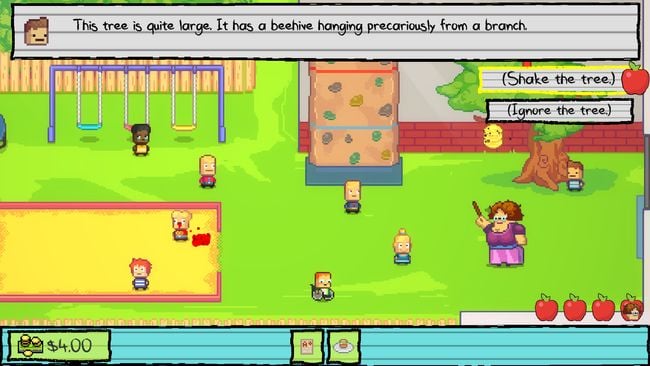 #1: Celestial Slug – Go through the mission “The Hitman’s Potty Guard,” Instead of going to science class, go to gym and get Ms. Applegate to leave the class. Return outside to get the card from Monty who’s on the ground still.

#2: Hard Boogar – No particular mission need, Just pay Monty to use the Handicap ramp and get the card on the side of the building.

#3: Bucket o’ Water – Easiest way I found was to do the mission “Tale of Two Janitors,”, and grabbing the Monstermon card in the cleaning cart while grabbing the chainsaw.

#4: Pale Tuna – Go through the mission “If you can dodge a Nugget,” instead of giving Nugget the nuggets, go to the dumpster to give them to Agnes. Obtain her cat, Tenders, and give the cat to Nugget instead. He’ll still hate you though.

#5: Ultralodon – Go through the mission “if you can dodge a Nugget,” Grab the leg and grab the change from the skeleton’s wallet. Instead of going to gym, go to science and match the leg with the one in the science classroom.

#6: Carnivorous Nimbis – Do this any way you want, Just make sure to get a soda from the teacher’s lounge and give it to Buggs during Gym near the water fountain.

#7: Tiny Squid – Do this any way you want, Just get into the science class. Pick up a slide, and get a sample from the fish tank, observe it under the microscope. This will only work if the teacher is in the room.

#8: Coral That Looks Like A Hand – Defeat Carla in a Monstermon Battle.

#9: Hermit Frog – Easiest way was to do the mission “If you can dodge a Nugget,” and get Ms. Applegate to leave the classroom. Proceed to take Monstermon Card from the cubby.

#10: Castle of Sand – Do this any way, just get to recess and climb up the rock-climbing wall. Don’t touch any of the gray rocks as you will fall. Won’t die, but it’s just annoying.

#1: Man On Fire – Obtained by completed the mission “Breaking Sad.”

#2: Chair of Spikes – Do this any way you want, just sneak into the girls’ bathroom and touch the couch. There’s a Monstermon card in there.

#3: Cigaretmon – Do the mission “Creature Feature,” while the school is on lockdown, the two hall monitors are in the boys bathroom. Hook them up with the lighter you obtained from Penny while getting Buggs’ knife back.

#4: Dune Worm – Obtained by completing the mission “If you can dodge a Nugget.”

#6: Cyclops Duckling – Get to the playground and complete the swing puzzle. The order for the swings are: Yellow, Blue, Blue, Red, Blue, Red.

#8: Lonely Dragon – Get to recess while holding a burger and unused pass, Give the burger to Agnes in trade for her cat. Use the pass for the bathroom and give the cat to the hall monitor in the boys bathroom.

#1: Monstrous Flytrap – Obtained for completing the mission “Flowers for Diana.”

#2: The Tallest Tree – Do the mission “Flowers for Diana,” up till recess, shake the beehive on top of Pennys head and grab the card from the hive after she runs away.

#3: Chill Stump – Normal run, Just get to science to get a slide, get a sample from the plant and put it under the microscope. Can only be done while the teacher is in the room.

#4: Gnome of Garden – Do the mission “Flowers for Diana,” grab the blue flower and continue up till lunch. Get into the teachers lounge and replace the yellow flower with the blue.

#6: Literally Grass – Do the mission “Flowers for Diana,” up till recess. When selling the weed to Monty, argue that the weed is worth more than $5 and he’ll throw in a Monstermon Card.

#7: Doodoo Bug – Bring the A+ card, skip before school and go straight to morning time in the smart class. Do the assessment and get the toilet paper as a reward. Leave the class and head downstairs. Use 2 turns and head into Ms. Applegate’s class. Do anything to use up that last turn and get the pass. During lunch, buy a burger and leave the mess hall to get into the bathroom. Use a few turns till Ozzy runs into the bathroom. Talk to him and give him the toilet paper. He’ll hook you up with the card.

#8: Mystical Tomato – Easiest way is most likely “If you can dodge a Nugget,” get behind the counter and the Monstermon card is in the corner with the nuggets. (I believe)

#10: Legendary Sword – Get to the handicap ramp any way you like, there’s a forest on the other side of the ramp with a message out front on some wood. Read it and follow the directions. The Monstermon Card will be at the end of that maze.

#2: Zen Octopus – Take the Fidget Spinner before Nugget gets into class. Give it to him after he sees there’s no toys left for him. Poor Nugget. :c

#3: Forbidden Book – Do the mission “Opposites Attract,” or “Creature Feature.” Just get into the principal’s office. There’s a red book in her bookcase. Interact with it for a Monstermon Card.

#5: Pot of Grease – Do the “Flowers for Diana,” mission. Instead of giving the salad to Felix, keep it and proceed to recess. Take the food to Agnes and trade it for her cat Gravy. Go talk to Cindy who’s sad about Felix not getting her something vegan and give her the cat instead.

#6: Lamb With Cleaver – Obtained by completing the mission “A Tale of Two Janitors.”

#7: Treasure Chest – Obtained by completing the mission “Cain’s not Able.”

#8: Mr. Nice Guy – Do the mission “A Tale of Two Janitors.” up to the point of getting the elevator key for the Janitor. Head into the girls’ bathroom and tell Bob what’s going on. You rock Bob.

#9: The Slurper – Do the mission “Creature Feature” up to the Secret Lab. Get the mutants off you and friends before grabbing the card in the bottom left corner.

#1: Onion – Get to lunch, wait for Ozzy to leave and take the card out of his bag on the table.

#3: Purple Plush – Find a way to leave gym (I say hit Ms. Jiggletits in the head with the basketball) and head to her classroom. Check the Toy chest for the card.

#5: Monster Ghost – Bring the laser module to school and A+ card. Give the module to Monty during morning time.

#6: Knight Who Turned Evil – Do the Mission “The Hitman’s Potty Guard,” Instead of following Felix’s plans, Show Ted the contract and go along with his mission.

#8: Mysterious Package – Head down to the crawlspace with Monty’s elevator Key. Talk to Billy and then check his box.

#9: Oglebop Orge – Do the “Opposites Attract,” mission. Get the toilet paper from the assessment and just clog the boy’s toilet before getting the doll.