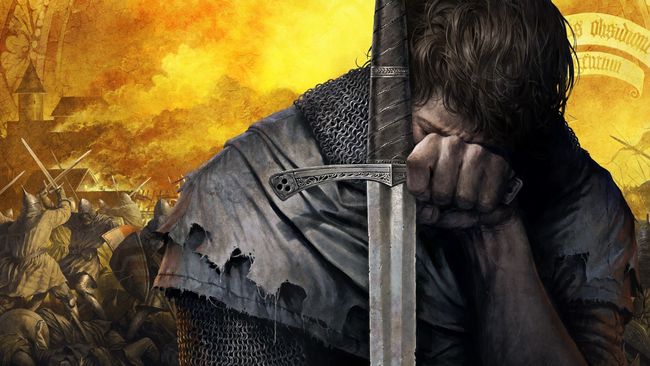 The Ring of Bacchus Quest Walkthrough

After Heinrich beat Dangler, you can go around camp and get acquainted with everybody. Approach Jakey and he’ll tell you that The Stone is looking for you on that ring business. Inform about this ring business and he’ll explain that they have a sort of game in camp that centers around the Ring of Bacchus – a worthless bauble – but whoever has it gets drink and food on Sir Kuno’s expense whenever they’re at an inn or tavern.

There is two achievements connected to the Ring of Bacchus (Lost Trinket and Game Over). It’s best collect them as soon as possible (you can even do so before heading out on your first mission), but if you want you can take your leisure in completing it in between quests. Eventually Jakey should leave camp, but he’s not essential for the achievements. He does give a hint here and there though.

To progress through the Game of Bacchus just wait 2-3 hours after you delivered the ring and a new challenger should call for your attention. Deliver and repeat untill the last challenger and you’ll get the Game Over achievement. The Lost Trinket achievement, however, is quite easy to miss.

Getting the Lost Trinket achievement is quite easy, however, it’s also very easy to miss. Once you got the Ring of Bacchus in your possession make sure to keep it. Don’t return it to whoever asked you to get it. Wait till it’s evening and go to sleep in the camp (all beds are owned so make sure the rest is already sleeping or they’ll kick you out). Sleep till 6 or 7 am and once you wake up you’ll notice the ring is gone and the achievement is yours. 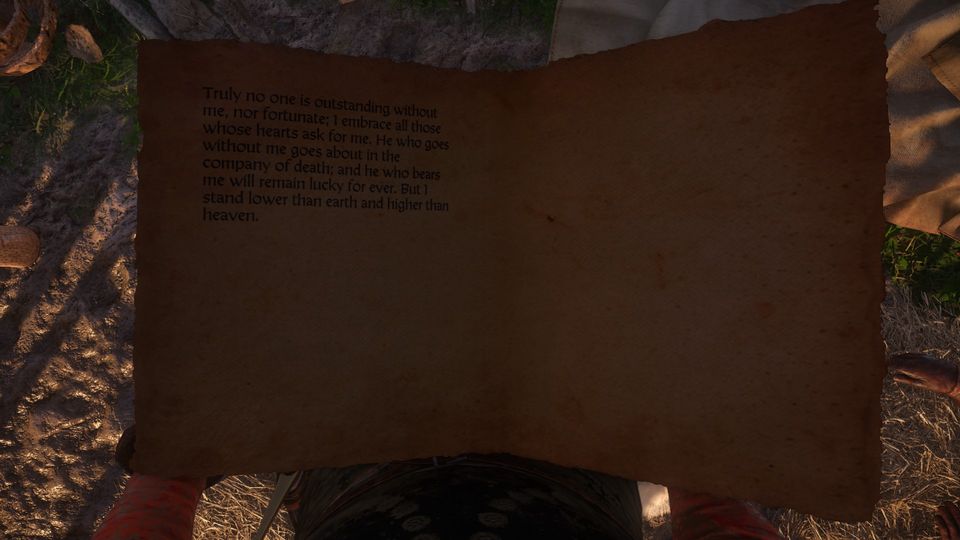 Don’t reload, because there is a small quest associated with the missing ring, which will get the ring back in your possession. After doing so you can still complete the Game Over achievement. The would-be thief did not only take the ring, but he also slipped a note containing a Mysterious poem in your inventory. Go on and read the note, and the hideous poem in it:

Truly no one is outstanding without me, nor fortunate; I embrace all those whose hearts ask for me. He who goes without me goes about in the company of death; and he who bears me will remain lucky for ever. But I stand lower than earth and higher than heaven.

Obviously, our culprit is a man of letters. If only Sir Kuno had such a man in his outfit. Go and ask the others and they’ll either tell you they all run away from a monastery or that the culprit must be you. Now go ask the strong silent type. If you’ve completed the first mission, you probably noticed The Stone standing over the victims in prayer.

Turns out he is our runaway missionary. He won’t give you the ring unless you solve the riddle though, and failing to do so means no ring.

The answer to the riddle is Humility.

1. Ask The Stone about the Ring of Bacchus
Go to The Stone and tell him you’ve heard about the game and want to help him out. He’ll point you to the Dangler as the current owner of the ring. You can pickpocket the ring from him, but it’s much more honourable to challenge him to a duel. Beat him and deliver the ring to The Stone and watch the quality conversation between the two of you progress. For a reward he’ll hand you the book Silence is Golden and Other Myths IV.

2. Take the Ring of Bacchus to Stephan
Seems like you are a very popular fellow in the Game of Bacchus, if only Heinrich would think of keeping the ring for himself. Oh well, wait a couple or three hours after handing The Stone the ring and Stephan Fletching will call you. Approach and he’ll tell you he knows you got the ring from Dangler to The Stone and he wants your help in getting the ring.

You can tell him you don’t want to steal, or tell him you’re okay to help. Both options lead to the Fletch telling you he wants to get the ring when The Stone is sleeping only… The Stone doesn’t sleep like his namesake. If only you could get Stephan a Lullaby Potion.

Get Stephan the potion and get 100 Groschen for a reward. Once again wait a couple of hours (Stephan wants to steal the ring during the night, but the activity progresses as though he immediately got it in his possession) and the next participant will call you.

3. Take the Ring of Bacchus to Jan Bearman
After giving the ring to Stephan Jan Bearman will approach you and ask you to get the ring for him—he warns you though that Fletch doesn’t have it on him. Go to Stephan and ask him to give you the ring back. Yeah, not a chance in hell, but he’ll give you a riddle:

Great, thanks for nothing! If Jakey is in camp you can ask him for more information. The information comes at a price (20 Groschen), or you need to pass a charisma check (level 7). He’ll tell you the ring is in a kestrel’s nest. You can see the (partly dead) tree when standing on the mount near the camp and looking north (towards Ledetchko).

Go to the tree and shoot the nest out (it’ll fall in tall grass and can clip through the ground so pay attention to where it falls). Get the ring to Jan to claim your 120 Groschen reward.

4. Take the Ring of Bacchus to Petr Bearman
The next contender in the game is Petr Bearman, he wants you to get the ring from his brother Jan, saying it’s best to just “pinch” it from him. Either pickpocket the ring directly from Jan, or fail an intimidation check (level 20), which will get Jan to brawl you (and earn you a reputation loss to boot).

(Winning a brawl from Jan will get you the ring)

After you’re done return to Petr and get 150 Groschen for the trouble.

5. Take the Ring of Bacchus to Sir Kuno
This time it’s The Chief who approaches you. Instead of raising moral the Ring of Bacchus now has the mercenaries going at each others throats so Sir Kuno wants to end the game once and for all. However, he can’t get the ring back himself, so do him a favour and get it for him, okay?

(Sir Kuno wants a word with the player)

Go to Petr and he’ll throw in a riddle for free (seriously is this a roving band of minstrels or why’s every single member a frickin’ poet sh-tting in verse):

Steeples guard the fields in a line, on one of them a cross you’ll find. Off you go from east to west. Find the steeple, that’s your test.

Not to hard isn’t it? Just gotta find steeples going from east the west and one with a cross on top. Look around the camp and you should find rows of hay drying poles. Find the one going east to west and the last one should have the cross-shaped wooden frame sticking out.

If you don’t feel like searching you can also wager him over a game of dice. Once you got the ring in your possession head over to Sir Kuno, he won’t give you a well-deserved ice-cold ale, but he’ll hand you the book Hercules and His Diet IV. You also just unlocked Game Over.