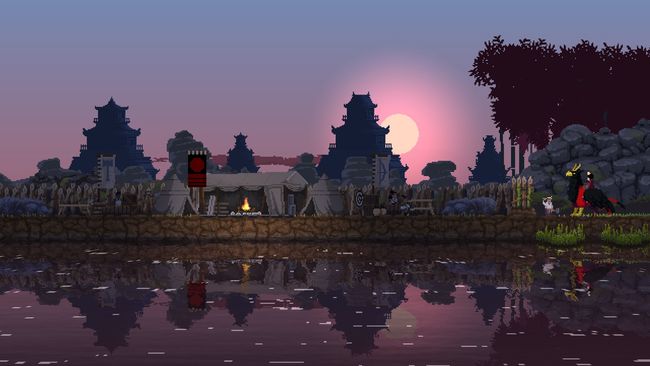 Vagrants (AKA Beggars) are NPCs who spawn at vagrant camps, and are the only way to populate your kingdom. They will wander around aimlessly within a certain vicinity of a vagrant camp, and are completely ignored by greed. When paid a coin, they will be hired to work for your kingdom, and thus will turn into a peasant.

The banker is a moneymaking NPC who spawns automatically once you have the “church” built from upgrading to a tier 4 kingdom. He goes inside during the night, making him and all your money that he holds completely safe from greed. During the day you can give him coins, which he will collect and store in the bank. He can only carry 10 coins at a time, while the bank can hold an infinite amount of coins. For each day that passes, the amount of Coins in the bank increases by 7% (it can never exceed 8 Coins per day, so at 101 Coins your interest stops growing). The interest is rounded up, so you will get at least 1 coin per day, as long as you have invested at least 3 coins. Because of this, it is a great idea in the long run to store Coins with the Banker. During the day, if you have more than two Coins in the bank, you can withdraw up to 33.3% (1/3) of your stored Coins by walking by the Banker. He never gives you more than your bag can hold, but tends to disregard gems, so he might give you too many coins if you are carrying some gems.

On your first day, the merchant enter your kingdom and stand next to the fire, with bags on his donkey. Next morning, he will drop some coins for you if you walk by, which will remove the bags from his donkey. He will then wait for you to pay him 1 coin, and if you oblige before night falls, he will travel out into the forest to the merchant’s hut. When he gets there, he will take a few seconds to equip his donkey with some new bags before he heads back to your kingdom. This process cannot be repeated once you destroy the merchant’s hut (by removing the trees around it), and he will disappear shortly after. The merchant is only available on islands 1 and 2, and cannot be killed by greed.

The Ghost
The ghost is a simple NPC that appears at the beginning of each island, representing a fallen monarch who came before you. They will try to lead you in the direction of the kingdom, and will disappear once they make it there with you.

The Hermits
A hermit will spawn from their respective hermit shack, and can be carried with you for 1 coin. While carrying a hermit, they will enable you to upgrade a specific type and level of building into a new building with a totally different purpose. After buying a hermit’s upgrade, traveling past your outer Wall while enemies are present, carrying them for a full day, or switching mounts, you will drop the hermit and need to pay another coin to pick them up again. Each of the hermits can be brought with you through a teleporter if they are on your mount, and all currently alive hermits will be brought with you automatically on the boat when you leave an island. All of the hermits will try to stay behind your walls like other NPCs, but unlike other NPCs, they are unable to run, and do not attempt to steer clear of greed. This causes them to sometimes aimlessly wander outside your walls at night just enough to get attacked, which can be incredibly frustrating. When attacked, they will be picked up and carried away by greed like a tool or coin. Once kidnapped, that hermit will be unobtainable until you either destroy a cliff portal (unconfirmed) or repurchase them after getting a game over. More info.

The Bow Shop
Sells: Bows (3 Coins)
The bow shop spawns to the right of the fire once it has been lit. This shop allows you to purchase up to 4 bows, which your peasants can pick up to become archers.

The Hammer Shop
Sells: Hammers (3 Coins)
The hammer shop spawns to the left of the fire once it has been lit. This shop allows you to purchase up to 4 hammers, which your peasants can pick up to become workers.

The Scythe Shop
Sells: Scythes (4 Coins)
The scythe shop spawns once you have built 2 stone-age walls defending the same direction. This shop allows you to purchase up to 4 scythes, which your peasants can pick up to become farmers.

The Spear Shop (Default Biome)
Sells: Spears (2 Coins)
The spear shop spawns once you have built 2 stone-age walls defending both directions (4 walls total). This shop allows you to purchase up to 4 spears, which your peasants can pick up to become pikemen.

The Dojo (Shogun Biome)
Sells: Shurikens (8 Coins)
The dojo spawns once you have built 2 stone-age walls defending both directions (4 walls total), and replaces the spear shop in the shogun biome. This shop allows you to purchase up to 4 shurikens, which your peasants can pick up to become ninjas.

The Forge
Sells: Swords (12 Coins)
Sells: Bomb (18 Coins)
The forge spawns once you have built 3-4 iron-age walls in the same direction. The forge allows you to purchase up to 4 swords, which your squires can pick up to become to knights. You may also purchase a bomb for 18 coins, which can be used to destroy the cliff portal.