Lords Mobile is a MMO strategy game with millions of players from all over the globe. In the game, you are the ruler of your Turf. You have to work to develop your Turf, expand your Castle, raise your army, and compete against others to be the best! To that end, you can choose to join a guild, and work together with your allies to further your goals. 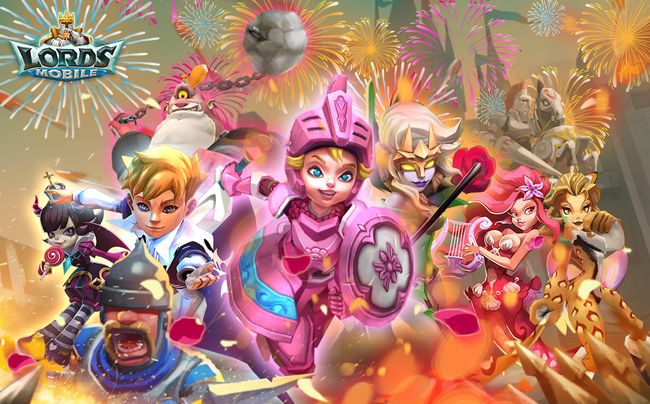 Talent Points
When you level up, you’ll earn Talent Points that can be used to boost different attributes. We recommend maxing out Construction Speed, Research, and Training Speed. This will greatly help developing your turf! If you accidentally put your points in the wrong talent, use a Talent Reset item from the Guild Shop.

Resource Allocation
Pick one of the following resources: Food, Stone, Timber, or Ore. Focus on building and upgrading that specific Resource building. Allocating Talent Points to the corresponding talents will also help boost your resource production. You can get the other resources by trading your chosen main resource with your Guild members. With this method, you can stay safe during Kingdom Wars.

Train Your Troops
Gather resources and train as many troops as you can! It’s best not to attack other players during the earlier stages. However, if you intend to take another player on, keep these points in mind:

How To Get Ahead with Free Heroes

Looking to get ahead in Lords Mobile for free? Focus on training Infantry and Cavalry troops. You can also climb the Colosseum ranks without premium Heroes. Here are suggestions from our players on how to get ahead without spending a dime.

Train Scarlet Bolt for your Infantry and Sage of Storms for Cavalry early on. Upgrade them to Green during the early stages of the game to unlock their Building Speed Up skills without having to level them up.

Trickster also offers a similar bonus. Upgrade him to Green to boost your Research speed.
To boost your Troops effectiveness, train Demon Slayer and Oath Keeper for Infantry as well as Child of light, Death Knight, Night Raven, and Rose Knight for Cavalry.
For effective Colosseum and Heroes Trial teams, send out Prima Donna, Tracker, Incinerator, and Snow Queen whenever possible. Girl power gets stuff done!

Try to train all of the Heroes mentioned above since you need at least 10 heroes to lead your army.

Early on, use Child of light, Death Knight, or Oath Keeper for a tank, and switch to Child of Light or Rose Knight for later stages.

What happens if my Leader gets captured?
If you build the Prison after upgrading a Lv 10 Castle, you’ll be able to capture the Leaders of players from other Lv 10+ Castle. Leaders can’t be captured if your Castle is Lv 9 or lower.

If your Leader gets captured, you can either wait for them to escape on its own, pay a ransom for its release, or post a bounty to encourage others to help you save your Leader.

We recommend that you do what you can to prevent your Leader from being captured. Once captured, your Leader will stop providing bonuses and you will be unable to switch to another Leader until they return.

A good plan is to appoint an unimportant hero as your Leader and always either keep them in your Shelter or send them to reinforce a shielded Guild mate.

What happens when I get attacked?
There are a few things to do when you’re alerted to an incoming attack. When your Watchtower detects someone is coming to attack you, you should immediately check that enemy’s Might. More often than not, it will be higher than yours. Otherwise they wouldn’t be attacking you. If the enemy is not someone you can handle, start by asking your Guild for reinforcements. The number of reinforcements your Guild can send to you is determined by the level of your Embassy.

If your Guild decides that the enemy is too powerful, take the following actions. First, immediately send your Leader to the Shelter with as many troops as you can pack in there. Then, send the rest of your troops to a far, far away spot. Ideally, somewhere that takes more than an hour to reach. Make sure to time it so that the battle will be over when they return. This ensures that the majority of your troops will survive the onslaught. Keep in mind that any troops you send to gather resources can be attacked, so keep an eye on your forces beyond your borders.

You’ll likely lose your traps, take some Castle Wall damage, and lose any resources not protected by your Warehouse’s limit. However, these steps will minimize your losses and the amount of time you’ll need to recover from this invasion.

Equipment Sets
What equipment set should you use? Well, it depends on what you choose to focus on. Different sets give different boosts and you can mix and match equipment from different sets to suit your needs. We recommend that new players focus on equipment that grant Resource Boosts to develop their turf before moving on to equipment with Army and Troop Boosts. It’s also helpful to have different sets saved for different situations. To do this, research Quick Swap in the Academy to unlock Equipment Sets. You can save Equipment Sets by using Equipment Quills, which can be bought in the Guild Shop.

Guild Hives
What is a Guild Hive?
A Guild Hive is an area where all guild members gather their turfs.

How do I relocate to my Guild Hive?
A) Tap on an empty tile (ask your guild members for the coordinates!)
B) Tap the Relocate button (make sure that all your Troops are in your Turf)
C) You’re there! Welcome to the Guild Hive!

– If you are in a different Kingdom, Migration Scrolls are required.
– You can use a Novice Relocator to migrate to another kingdom if your account is less than eight days old & your Castle is below Lv 6.

Where can I get Relocators and Migration Scrolls?
You can get these items from the Guild Shop. Get Guild Coins by helping your Guild mates!

There are 4 different types of troops. Each type has 4 tiers, 3 of which are unlocked through research in the Academy (in the Military tree; Academy Lv9 unlocks research for Tier 2 troops, Lv17 unlocks Tier 3, Lv25 unlocks Tier 4). Each type has their strengths and weaknesses.