A guide for players looking to use heavy builds effectively in Mordhau. This guide will outline the gear and strategies used to do well using heavy builds. It will contain example classes and tips for how to use them in-game; in duels, skirmish or the clusters that are frontline and deathmatch.

In all the builds in this guide the armour equipped is top heavy. This is for 2 reasons:

The builds in this guide focus less on perks and more on the player’s weapons and armour. Perks in Mordhau gear you towards certain styles of play and the fact is that having the heavier weapon and armour will often give you the upper hand. The perks I do find myself using to make my builds more effective are:

I have not found good reason to use the other perks in a heavy build although I’m sure some of them give advantages in specific circumstances, again though heavy builds will always be more gear focused.

All builds display the points put into them, what the weapons are like and the best ways to use them. I have given 5 examples of builds that I have been using, it is up to you to customise the cosmetics and change the builds so that they fit your play style better. That being said I think the builds are fine as they are and that you should give them a good try before changing anything non cosmetic.

For the perk I usually use Tenacious, other good perks for this class are Cat and Acrobat.

Overview:
This kind of build rewards either fighting in a group or duelling. If you are alone and faced with multiple enemies you will not see much success.

Mechanics:
The Eveningstar is a very high damage weapon, it can combo, but it does however suffer hit-stop on non-lethal hits.
The Alt mode of this weapon shortens it, but it keeps the same modifiers. This weapon is analogous to [Slash/Stab]:

Strategy:
To use this build effectively in team fights go for already damaged enemies or low armoured enemies and aim to swing through kills into other enemies. A mix of swinging and stabbing will keep the enemies backing up, just don’t try to take too many enemies on at once.
To use this build effectively in duels, make the most of the extremely slow swing speed and reasonably fast jab speed. Switching between the weapon’s modes keep the other player on their toes and will allow you to change the range at which the fighting is taking place. The weapon will 2 hit consistently if you’re aiming well and are making use of both modes. 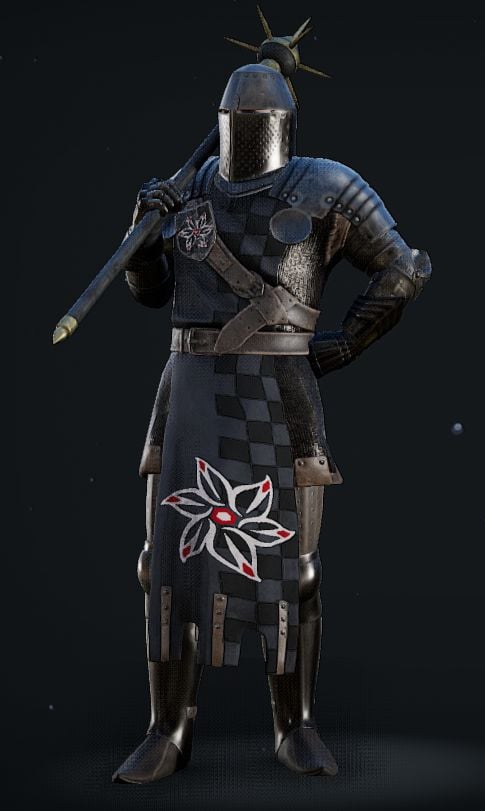 IV-b. Compensating for Something

Overview:
This build is good for taking on groups of enemies, duelling is alright and if you’re fighting next to teammates pray that at least they have the friendly perk.

Mechanics:
The Zweihander is the best weapon in the game, it does not suffer from hit-stop, it can combo, it has high swing and high stab damage, and is stupidly maneuverable for it’s length.
The alt-mode of this weapon shortens it, but it keeps the same modifiers.
This weapon is analogous to [Slash/Stab]:

Strategy:
To use this build effectively against many enemies, riposte and switch which enemy you’re aiming at mid swing/stab. There is a slightly odd mechanic that makes it so that when you are riposting and already in the swing you cannot be flinched (but hey I’m not complaining). You have to use this mechanic to your advantage to take on lots of enemies. If you are good enough with the aiming and your character placement Frontline almost becomes Horde mode. Every time you kill an enemy your stamina and health refill by about a third, you can chain enemies with the Zweihander like no other weapon, 10-15 kills without taking a break from swinging are definitely possible given enough enemies and enough external stimuli for them to be also worrying about (eg. you cutting through the side while teammates are holding a line). You can take off 3-4 heads per swing with this weapon. To use this build effectively in duels, use the alt-mode and stab.

Extra Tips:
Figure 8 while swinging and you’ll be able to take on as many enemies as you want. Try to make your legs look armoured, having a long skirt and keeping colour consistent will help with this. This is also the most effective weapon to use on a horse, time your swing properly and try to knock the enemy you want to kill just to the side of your horse, they will be sort of dragged into your blade (you’ll know when it’s happening right).

For the perk I usually use Tenacious, choose wisely as you only have 1 point.

Overview:
This build is a mix of the two previous builds, it is less powerful than either but it gives you the ability to play with both play styles.

Mechanics:
The Executioner’s Sword is a the highest damage weapon in the game, it does not suffer hit-stop, it can combo and it’s specifically designed to lop off heads. It is analogous to [Slash/Stab]:

Strategy:
This weapon is really just a non hit-stop Eveningstar that you can’t stab very well with.

Extra Tips: The ringer blade looks cool. The stab is weak but unexpected.

For the perk I use Tenacious.

Overview:
This build is good for defensive play, it is the most heavily armoured build of the guide and on top of that has a shield.

Mechanics:
The Bastard Sword is a One/Two Handed sword, it does not suffer hit-stop, it can combo and there is no reason to use it Two Handed. It’s really just the mid-range sword of the game and therefore not really comparable to anything else:

Main : Sword/Also a sword
Alt : Just don’t. Put your shield away sure, but keep the sword one handed.

Strategy:
This weapon is alright and does decent damage, try to keep the enemy close. Never use it two handed and get good at kick dodging/blocking.

Extra Tips: Shields really aren’t that good, it’s all on the guy with the shield to read the enemy. Better for team fights when you’ve got multiple enemies doing staggered swings. 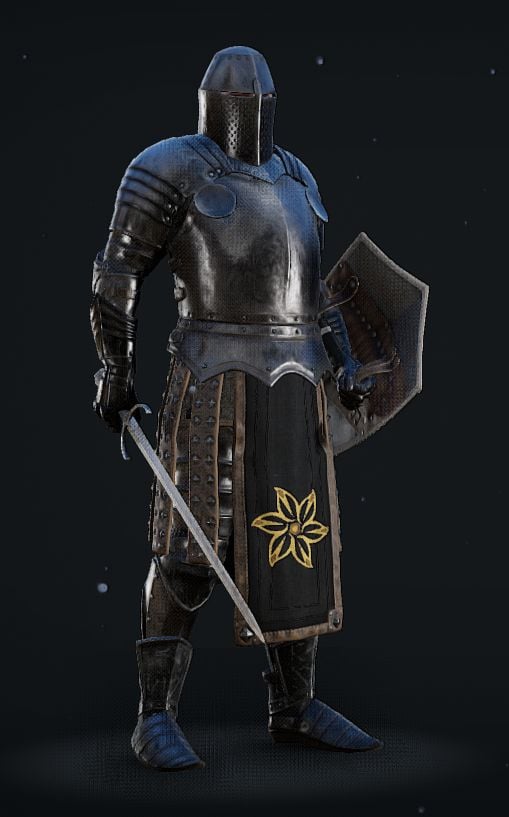 You can’t really have a heavy build with perks if you’re using an 11 point weapon.

Overview:
The Halberd is a weird weapon, in it’s main mode it’s a slightly worse Zweihander and in it’s alt mode it has nearly the same length as a spear but 5x the swing damage. Both modes work quite well and swings out of nowhere followed by a cheeky stab will catch many enemies off guard. I prefer to use it in alt-mode.

Mechanics:
The Halberd leaves 5 points spare for armour/perks and the two playstyles you get from the modes are “Zweihander’s Little Brother” and “Spear’s Big Brother”. The Alt mode of this weapon lengthens it, and prevents it from comboing. This weapon is analogous to [Slash/Stab]:

Strategy:
The Halberd’s good if you learn how to use it properly, it’s all about keeping distance. Think of the Halberd as a really deadly broom and you’re trying to shoo away a rabid dog. If the dog gets to close to you you’ll die of rabies and if it pushes you backwards too much you’ll trip over something (or walk into a wall) and die of rabies. Just take long range melee fights and make sure they stay long range.

Extra Tips: If alt-mode isn’t working, switch to the main mode and try to use it like a sword (in main it has combo). 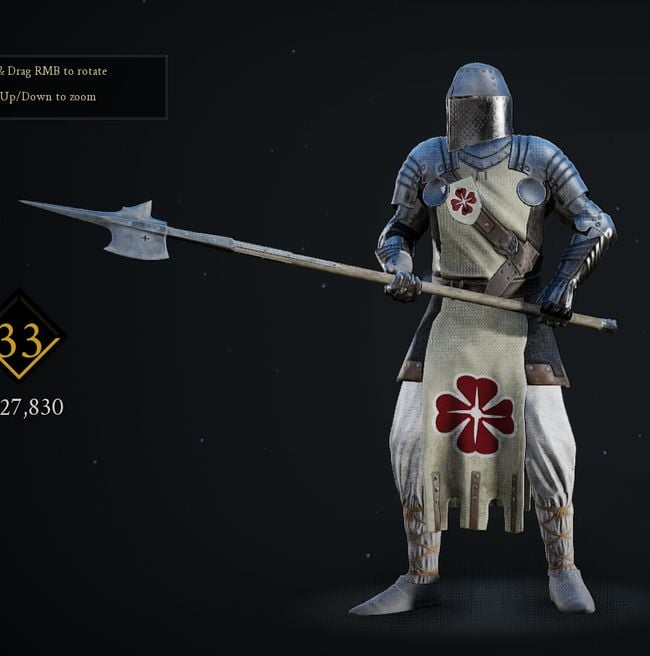 Maul: One hits anyone in the head. Swing speed not too bad, throwable and costs 7 points. This means you can have a throwing Maul and a backup Maul (I’m sure someone will make something of that). I have seen players use it very effectively.

Greatsword: Big sword with decent stab damage, worth having a look at.

Spear: Length and speed becomes a problem in close range, more so than the Halberd. Alt-mode makes the weapon more usable.

Small Weapons <5 points. You will find that smaller weapons and the slow repositioning speed of your character will not make for a good mix but some of the weapons are manageable:

1. Equip your weapon in the 3rd slot. In the 3rd slot the weapon is always the last to equip and will auto equip on weapon loss. This means that midway through a fight when you pick up a throwable to peg at the enemy, as soon as you throw the spear/axe/sword you’ve picked up, your main weapon will come out with no delay or need to click anything. It will become habit to click 3 (or whatever) to go to your main weapon when you’re doing other things anyway.

4. Using horses with a Zweihander will single-handedly (literally) net you 100 kill Frontline games.

5. Cosmetics in this game will help the enemies decide how much of a threat you are. If you look really easy to kill people will underestimate you, if you look really difficult to kill you add some scare factor. 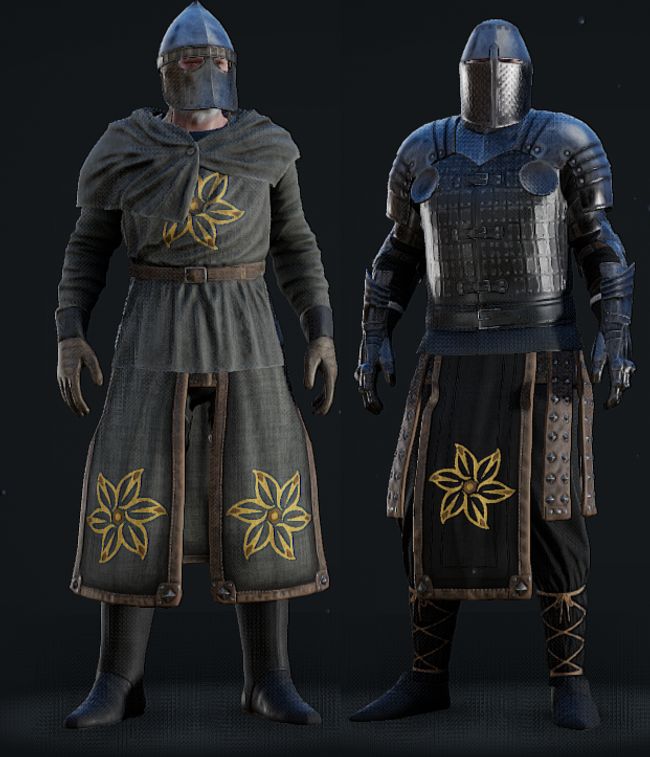 Obviously this will become less of an issue as people learn the game more, but for now wearing weird combinations of armour and cosmetics can give you a bit of that puffer fish effect and whatever the opposite of that is.