Mordhau console can be opened by pressing one of the following keyboard hotkeys: (`), (~) or (End). Type a command into the text box and hit enter to send it. Happy cheating!

Mordhau uses a points based loadout system. You start with a total of 16 points, which you are free to spend on Weapons, Armour, and Perks.

The Mordhau Armory has a wide variety of weapons and armour in its arsenal. The weapons and armour you equip will [usually] influence how you predominantly play. There are general (all purpose) weapons; There are also more specialized weapons for dueling & support roles.

There are 3 slots to equip weapons/utilities. The first slot is usually your primary weapon, second slot is secondary, and third slot is tertiary. The best way to categorize weapons is through their point-cost.

1-3 point weapons: Side arms & backup weapons, either they lack damage or reach, but can really help out if you just need to land one more hit on someone.

3-5 point weapons: Dueling Weapons. These fill the role of backup or primary; these weapons are usually suited more towards duels, but can be used in teamfights pretty well, especially the longsword and the messer.

6-8 point weapons: Middle-ground weapons. Bardiche, greatsword, poleaxe and battleaxe are pretty great in every situation, especially if you use the alternate modes.

8+ points weapons: Support weapons. These tend to shine in team fights, with great reach and good damage. Eveningstar packs a massive punch but is slow, while something like the spear can get super quick stabs in from crazy far away. Halberd/zwei are awesome cleaving weapons and work best when you don’t stick to a 1v1, instead switching around to get kills on people who are fighting someone else.

Blunt weapons usually deal the most damage to armored opponents, but can only hit one person at a time due to hitstop. (this does not apply if you kill the opponent, where your swing continues fully through release.) Hitstop helps the player conserve stamina in 1vX situations, because they don’t have to CFTP to protect themselves.

Sword/Spearlike weapons deal the most damage to unarmoured/light opponents, while remaining fast and being able to cut through multiple enemies, but require more stamina to play in 1vX situations

Most weapons have an alternate-grip. Pressing ‘R’ will switch to your weapons alternate grip.

The alternate-grip allows you to wield your weapon at a different range. It usually gives you more speed at the cost of less damage & range (or vice versa). Some examples of Alternate-Grips are:

If a weapon doesn’t have an alternate-grip (such as most 1-Hander’s); Pressing ‘R’ will throw your weapon.

Mordhau offers a variety of throwables you can equip:

There are 3 slots to equip armour,

The first slot is your head, second slot is chest, and third slot is legs. 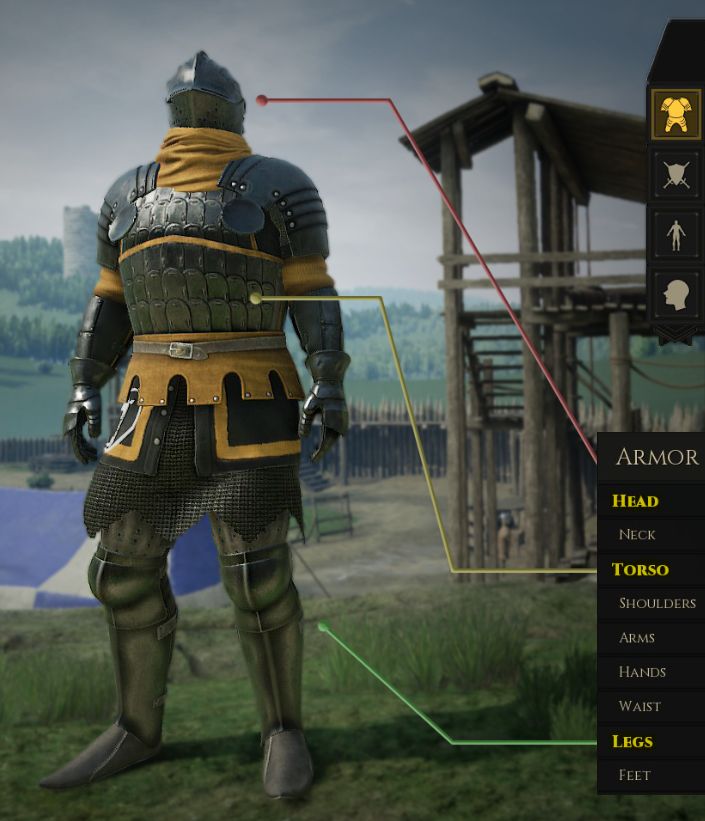 Armour is important, as it will mitigate damage dealt to those parts of your body.

There are 4 tiers of armour in Mordhau.

Each armour tier has progressing amounts of damage mitigation, at the cost of footspeed.
Cosmetic/T0 items are purely aesthetic, as their name implies.

For example, Heavy Armour will slow you down the most but you can take more punishment. You may mix and match armour tiers in your loadout.

Players commonly refer to their armour loadouts with numerical terms. For example, full heavy (head, torso, legs) would be 3/3/3. Mix match would be 2/3/1. No armour would be 0/0/0, etc.

Which armour should I use?
That depends on your playstyle you want for that loadout. 3/3/3 would be the epitome of ‘stand your ground’ playstyle’. Whereas 0/0/0 would be the ‘run away and bait playstyle’. A lot of players like to strike a balance between the two with mix matching. Many new players are drawn to using little armour & big weapons (like the Chivalry Vanguard). Beware of this as many weapons can easily cut through Tier 1 & 2 armour. I would recommend at least a Tier 3 chest-piece.

Also, if you are new, wear a helmet. Good players will identify your weakness and target your head. The helmet and torso/chestpiece are two of the most important pieces of armour.

Player Perks offer unique passive buffs & abilities for your character. Each perk you choose has an associated point cost with it; so you must choose wisely.

Some possible changes to certain perks?

Horses are extemely powerful vehicles located on the battlefield. Horses have a few purposes.

1. Use it to trample players. If the Horse is traveling fast enough, it will damage and flinch players upon impact (damage depends on speed of horse).

2. Couching – Using a lance or polearm to skewer players along your path.

3. Speed/Traveling – Using the horse to quickly get to a critical objective or location.

You can wield any weapon/shield while on a horse, however, only some of them are couchable, like a lance (or other polearms). Calvary has momentum based damage; The faster you are riding, the more damage you and your enemy will receive from attacks.

Couch: to lower (a weapon) into position for attack.

Lances
You will usually find lances next to stables.
You can only couch a Lance when you are traveling fast enough.
You cannot parry with the lance. However, you may perform basic attacks with it.

There are 3 types of horses:

Catapult:
Launches a large rock and causes AoE damage. Anyone within the radius of the impact will die. The best way to use catapults is to shoot them at castle/fort chokepoints such as wall openings, gates & bridges. Once youve ‘dialed’ in the distance to the chokepoints, launch rocks at it. Beware not to hit your allies!

Ballista:
Launches a large bolt over a great distance. Scoring a hit on an enemy will instantly kill them, but also requires greater accuracy over the catapult. Ballistas are best used for sniping enemies off walls, chokepoints, and taking down horses.

Ladders:
You can climb up ladders, for obvious reasons.You may also fight on a ladder by equiping a 1-hander weapon.

Fortifications:
Fortifications can be built by players with a Toolbox. The Toolbox has a total of 6 ammo. You always start off with 3 ammo, making Ammo Crates an important resource to utilize for engineer loadouts. Press ‘R’ to toggle between the different fortifications.