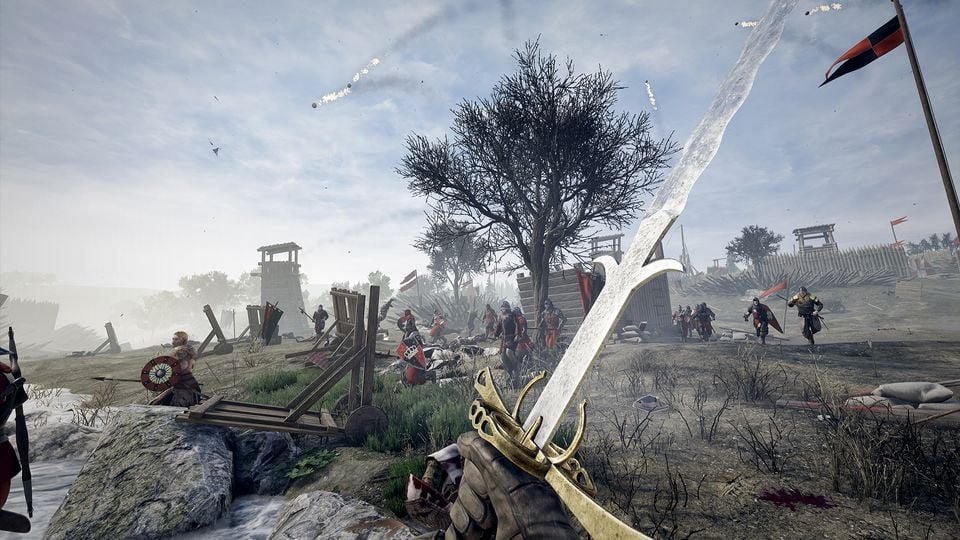 There are 3 slots to equip weapons/utilities. The first slot is usually your primary weapon, second slot is secondary, and third slot is tertiary. The best way to categorize weapons is through their point-cost.

1-3 point weapons: Side arms & backup weapons, either they lack damage or reach, but can really help out if you just need to land one more hit on someone.

3-5 point weapons: Dueling Weapons. These fill the role of backup or primary; these weapons are usually suited more towards duels, but can be used in teamfights pretty well, especially the longsword and the messer.

6-8 point weapons: Middle-ground weapons. Bardiche, greatsword, poleaxe and battleaxe are pretty great in every situation, especially if you use the alternate modes.

8+ points weapons: Support weapons. These tend to shine in team fights, with great reach and good damage. Eveningstar packs a massive punch but is slow, while something like the spear can get super quick stabs in from crazy far away. Halberd/zwei are awesome cleaving weapons and work best when you don’t stick to a 1v1, instead switching around to get kills on people who are fighting someone else.

Blunt weapons usually deal the most damage to armored opponents, but can only hit one person at a time due to hitstop. (this does not apply if you kill the opponent, where your swing continues fully through release) Hitstop helps the player conserve stamina in 1vX situations, because they don’t have to CFTP to protect themselves.

Sword/Spearlike weapons deal the most damage to unarmoured/light opponents, while remaining fast and being able to cut through multiple enemies, but require more stamina to play in 1vX situations.

Most weapons have an alternate-grip. Pressing ‘R’ will switch to your weapons alternate grip.

The alternate-grip allows you to wield your weapon at a different range. It usually gives you more speed at the cost of less damage & range (or vice versa). Some examples of Alternate-Grips are:

If a weapon doesn’t have an alternate-grip (such as most 1-Hander’s); Pressing ‘R’ will throw your weapon.

Mordhau offers a variety of throwables you can equip: