I’m making this guide because I’m tired of seeing randoms being so helpless and oblivious when it comes to playing with a post scorer in their team. I see it way to often where people won’t pass it to a post scorer when it posts up, but they will pass it when he’s completely open on the 3 point line when he was screening shooters. To me, it means most people don’t understand what a post scorer is, hence why I created this guide.

Post scorers have received a buff, especially when the takeover activates, so they’re even more of a viable option than previous years. Post scorers/back to the basket big men have always been a very good build to make, but are usually poorly utilized by their teammates. It’s an “easy to learn, hard to master” type of build, which is among one of the reasons why you might see them in fewer numbers than other big men builds.

Note: this is not a build on how to play post scorer, but for you on how to utilize a post scorer in your team.

What is a Post Scorer?
A post scorer is a back to the basket player. They’re among the strongest archetypes every year (max strength) and have great offensive attributes in everything except 3 point shooting usually. If you’re really new to basketball in general, I suggest looking up people like Hakeem Olajuwon, Kareem Abdul Jabbar, Shaquille O’neal, David Robinson to see how a Post Scorer plays (80-90% of the time, they played with their back to the basket). For some more present day examples of post scoring, look at Joel Embiid, Demarcus Cousins, Lamarcus Aldridge, Karl Anthony Towns and Nikola Jokic (40-60% of the time they play with their back to the basket).

For this example I’ll use the 7’3 Pure Post Scorer on Center to explain what a Post Scorer can do. 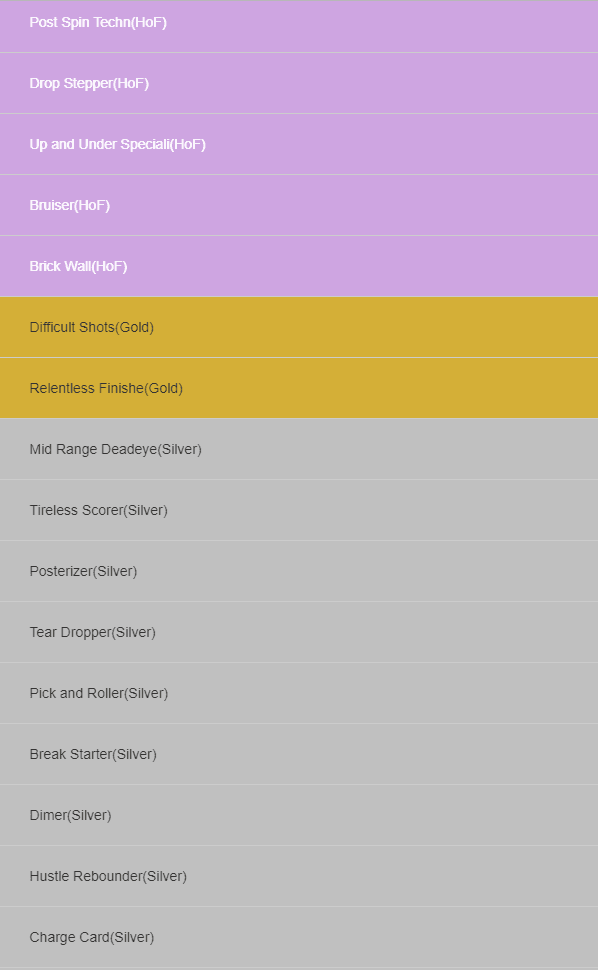 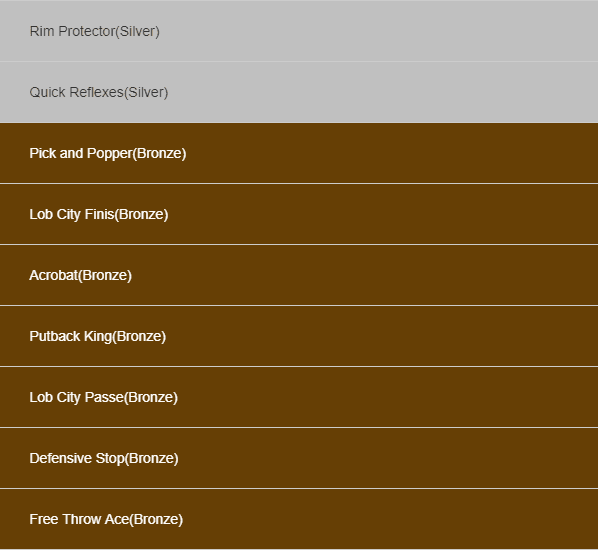 Looking at these screenshots, you can see all the badges they get maxed out. The HOF badges are there to score in the post. The brick wall speaks for itself. But as you’ll see, the post scorer is a very versatile build that can score inside but also a little bit outside. It can also help teammates since it gets silver dimer. This is great when a post scorer is doubled and he needs to pass it to you who’s open. It also received a buff in rebounding, since it can now be a decent rebounder, despite being very unathletic. It also has some silver defensive badges to go with it. 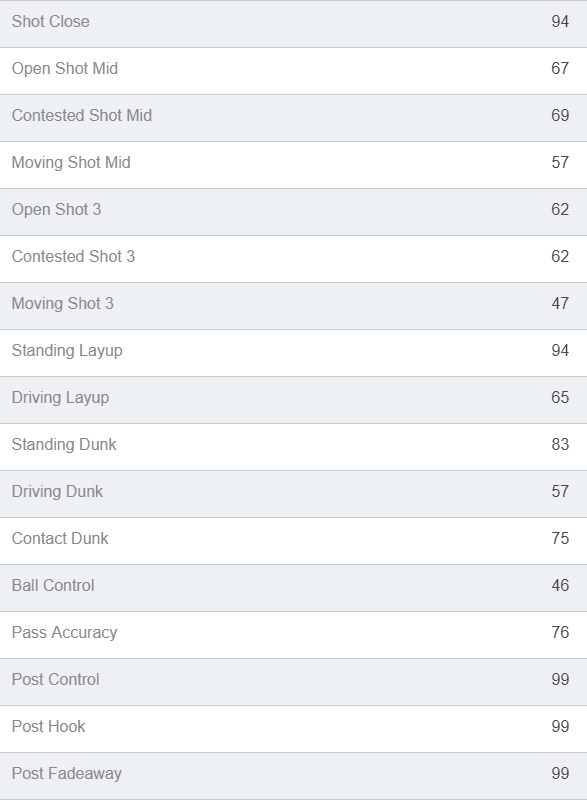 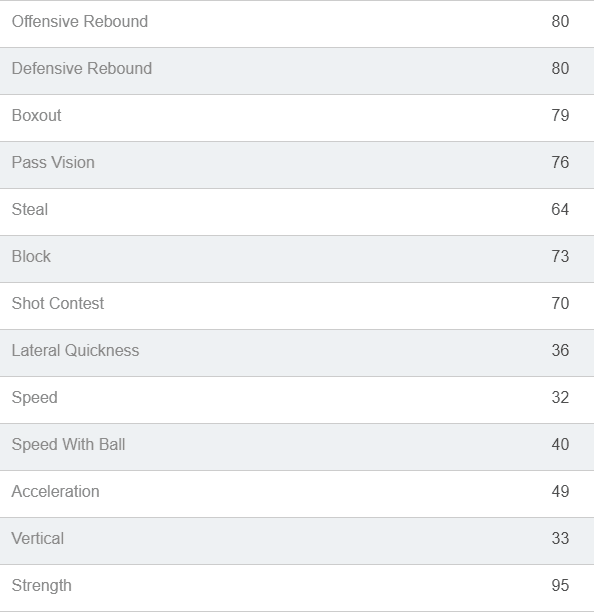 For this, I won’t go into the numbers too much, since it’s self explanatory. But you’ll see that typically, a post scorere is much better at scoring from everywhere compared to other big men archetypes. They’re typically one of the least athletic archetypes though, which may bring problems to rebounding and defense at times, but it’s up to the post scorer how he deals with that. I hope this draws a good picture of how many offensive attributes a post scorer receives. That’s why I said it’s sad that most randoms don’t lob it into the post, but they will pass it when they are open on the 3 point line, which is their least effective offensive rating.

This is a scoring option, not a role player like rebounders and rim protectors. Use them as such.

Yes, post scorers have decent badges when it comes to rebounding and defending, but glass cleaners and rim protectors also received buffs this year in those aspects. Don’t expect a post scorer to be a Steven Adams type of player who does all the dirty work, i.e. grabbing many offensive rebounds. Their strength lays in scoring and playmaking, so when you have a post scorer try to involve them in the offense. I’m not saying, they have to score every possession or whenever they touch the ball, but their position in the post is a way for them to make plays. Today’s post scorers make more plays than older ones imo, such as these:

All the above examples are all playmaking that is done by the post scorer. When I talk about passing to the post scorer, it doesn’t only mean for them to score. They have to utilize their teammates as much as possible, since basketball is a team effort. It’s such a great threat, that they usually get doubled, so the rest can get easy buckets. In the next section I’ll go into how different archetypes can position themselves to allow a post scorer to make plays for them.

Shooters positioning
I’d say, as you see in the clip when you run the offense through a post scorer, is that the 1-3 position always try to space the floor, since these are generally your shooters. Post scorers will get double teamed quite fast, so it’s crucial that shooters know their role and stick to the 3 point line. Most shot creators this year even have silver limitless, so make use of that. You’re not helping anyone by cutting to the basket every second, or worse, standing in the paint, as this will only bring more defenders to the post scorers. Plus you most likely can’t score in the paint if you’re not a slasher primary at a small position (1-3).

https://streamable.com/64rbq This clip right here is a post scorers’ dream, when doubled, to have a shooter wide open to take a 3. You see Hakeem trying to drive to the basket, but another defender will be there to face him, which happens to leave a shooter wide open. Don’t forget post scorers will typically have silver dimer, so you should be able to make those shots consistently.

Stretch big positioning
Where the stretch (four) comes in, is when the other teams’ big decides to double team. This allows a stretch for a complete wide open shot. As you’ll see in this clip: https://streamable.com/ylaqd, Dennis Rodman will glock the paint so Hakeem can’t make a drive. This allows Horry for a clean open shot. It’s a post scorer’s dream to have a big that can shoot, because this will mean the opponent’s big can’t leave the stretch open to double team the post scorer, which means the post scorer will only have to deal with his own opponent.

Rebounders positioning
The other big (4 or 5), can either stay around the mid range or screen for shooters. He shouldn’t be very near the bucket, as that will only bring the other defender to the post scorer, which ruins the spacing. Even if he’s a rebounder, he should stay a bit further away, just close enough to crash the board when needed. A good example is this right here https://streamable.com/xfkkz, when the rebounder is damn near the 3 point line, but it allowed for great spacing for the post scorer.

NOTE TO NON REBOUNDERS: I see way too often, where the smalls of our team decide to crash the board if a inside big misses a shot. This will usually leave the opponent wide open to shoot a 3 in case they grab an offensive rebound. Understand your role, play your role and don’t try to do things it simply cannot do. Let them grab 10 offensive rebounds, do not leave your guy open to go and “help” rebounding.

Slashers positioning
I talked about it a little bit above, that no one should cut to the basket when a post scorer has the ball. This is usually only valid when it’s in the low post, as Hakeem usually does. If a post scorer gets the ball in the mid post, as you’ll see here https://streamable.com/b1zk5, a slasher can easily cross the court to the other side’s corner. Embiid get a hand off from Simmons, Simmons cut to the basket and got the ball back from Embiid. If you’re a post scorer, utilize your teammates’ strengths. Post scorers, depending on position, can get bronze up to gold lob city passer, which greatly complements slashers in their team.