No Man’s Sky Next – Weapon and Combat Manual

Documentation of how various weapons work in the NEXT era of No Mans Sky. Also some combat tips that may help you kill things faster. Hopefully.

Other No Man’s Sky Guides:

The point of this guide is to provide some explanation for weapon functionality due to the lack of explanation of how exactly the weapons work. The idea is to prevent wasted material on bugged or bad weapondry. Also I’ve yet to use all the weapons in the game but will hopefully get to them all sooner or later.

This is the basic tool available from the start on all Multi-Tools. It’s pretty much useless in combat due to removal of combat upgrades so it is best used simply as a tool.

A typical, reliable automatic projectile weapon with a mediocre fire rate, low recoil, good damage, and slow accuracy loss. So far, this has been the weapon that was the most effective for me and upgrades and good aim allow it to take down sentinels quickly. Relatively long bursts can be fired before the accuracy loss results in a decrease in effectiveness of the weapon. A large magazine and relatively fast reload speed allow for this weapon to be shooting more than reloading.

I’m not sure if this thing is suppose to be a saturation cannon or an SMG but it fires very fast and has a lot of recoil. Each shot consumes 3 ammunition but doesn’t justify this increased ammo cost with increased damage. The first few shots in a burst experience extreme recoil but stabilizes, trading accuracy for stability. The large magazine of about 90 depletes extremely quickly due to the 3x ammo consumption and high rate of fire. This weapon may have a “spool” where longer bursts create additional projectiles for the proportional cost of ammo.

An absolute blunderbuss. This weapon is hardly effective outside of melee range due to its high spread and quick falloff. The magazine only allows for 3 shots to be fired and suffers from both a low rate of fire and extremely slow reload. Just imagine Sledge’s Shotgun but half as fast and even more spread. Each projectile from this shotgun doesn’t deal a spectacular amount of damage but is about on par with the Boltcaster. This weapon is basically a glorified melee weapon.

I’m not sure how the hell I’m suppose to engage in actual combat with this thing if only 3 out of 8 pellets can hit a concrete wall at 30u. (Aiming point is elevated due to recoil) 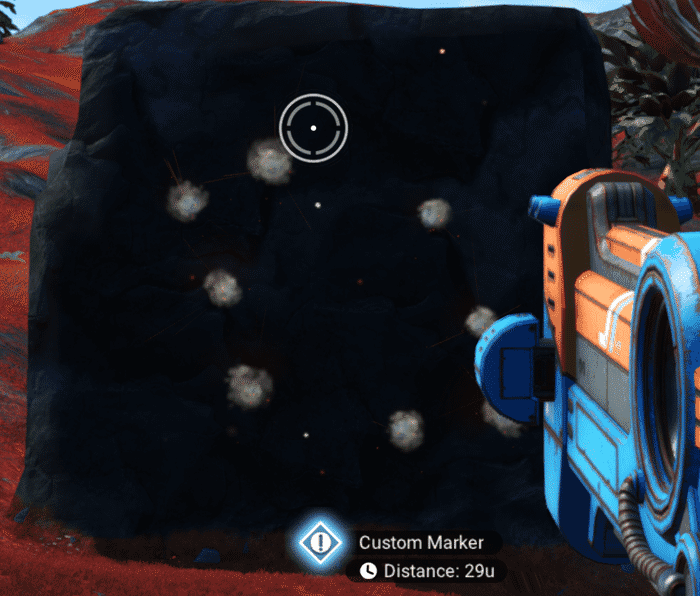 For comparison’s sake here is an image of all eight pellets hitting a wall of dirt at 30u.

Being the only hitscan weapon out of the bunch and one that functions differently from the rest, the Blaze Javalin is a charge up laser that can do a large amount of damage in a single, precise hit. The weapon suffers from slow charge times but this may be remedied by upgrades while simultaneously increasing the damage. This weapon does not use physical projectile ammo like the other three weapons but a charge akin to the mining beam. It can be fired at a partial charge for reduced damage but there is a threshold of about 5% for minimum charge. It takes about 2 seconds to fully charge this weapon without upgrades and the charge is held until the trigger is released. This weapon has potential, but will require some upgrades before it reaches conventionality.

Since you can no longer use your weapon with your Analysis Visor, the Combat Scope is suppose to provide some zoom and recoil reduction for long range shooting. This device appears to be bugged as it drastically increased the spread of the Boltcaster when in use. It can also show an ammo count of -1 or 50 which probably doesn’t mean anything but it is concerning to see an ammo count on a device like this. It is recommended to avoid this device.

This is your combat grenade launcher. The projectiles have a slow travel time, steep drop and do not explode on impact with the ground. This weapon is extremely powerful and extremely useful for taking out Resource Depots, Sentinel Quads, Sentinel Bipeds, and doors to Manufacturing Facilities. Upgrades can improve damage, explosion radius, bounce capability, and projectile speed but on its own it is a powerful weapon. Requires one Unstable Plasma for every 20 shots. Highly recommended secondary.

Acts like the old Plasma Launcher where it can damage entities and destroy the terrain. It does less damage than the Plasma Launcher but it is a fast, but expensive way to harvest resource deposits. Similar to the Plasma Launcher, it requires one Unstable Plasma for every 20 shots. This can be refined in a Large Refiner using Oxygen, Carbon, and Ferrite Dust (10x, 20x, 10x). There is likely a way to craft it in your pocket but I’ve yet to find the recipie.

Haven’t used this one either cause it seems kinda lame but I’d assume its a directional shield that has a damage threshold before it needs to be recharged. Whether or not this requires manual charging, deactivation, or simply waiting isn’t known to me but I’d assume its one of these. You also can’t use any weapons while its active, as seen in the description.

This is the basic weapon attached to all Starships by default and cannot be dismantled from them. This is a well rounded projectile weapon which does not need to be recharged or reloaded but can overheat with elongated bursts.

Held beam weapon that is likely more useful for mining rather than combat. Relatively low DPS and quick overheat times prevent it from being useful in space combat. This weapon cannot critical hit a ship when shot at from behind but has higher than average per hit damage on regular hits.

Low per shot damage, high fire rate, and a quick overheat make this a sort of large scale SMG. There is an upgrade which you can learn the blueprint of that is called “Nonlinear Optics” that is incorrectly labeled as a Photon Cannon upgrade but is actually for this weapon. The upgrade adds a third cannon for this weapon, theorectically increasing DPS by 50% assuming this doesn’t cause even faster overheat.

High damage, low rate of fire, and low projectile speed makes this weapon seem similar to a Particle Projectile Cannon, but with a low velocity. Its not really a sniper or a blunderbuss…guess the only way to describe it is as a ballista. Even with its low rate of fire, it can overheat after a small amount of shooting but it requires generous amounts of lead to hit a moving target.

This is your super space space shotgun. The spread on this isn’t as bad as the Scatter Blaster meaning its actually somewhat useful (last I checked) and has a decent fire rate but overheats quickly. Its very good for making short work of asteroids but may be lacking in actual combat due to range limitations caused by spread and possibly falloff as well.

This is the weapon you pull out when you know you can make one good hit to wipe out your enemy quickly. Featuring a slow projectile, extremely high damage, and very quick overheat, it is best that this weapon is used only when you know the shot will land. The fire rate is relatively slow but it usually overheats after a shot or two anyway. Did I mention it does a lot of damage?

Being that killing enemies quickly and efficiently is ideal, hitting enemies where they take the most damage is usually pretty helpful for accomplishing this. All ground units have a critical hit location somewhere on them and they can be hit for a 4x multiplier. 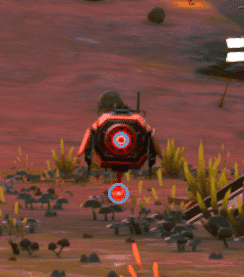 The critical hit locations on this are in the eye and the tip of the bottom antenna. The eye location can be finicky to hit but missing the critical location is less punishing. Critical hits usually ignore combat armor from armored drones. 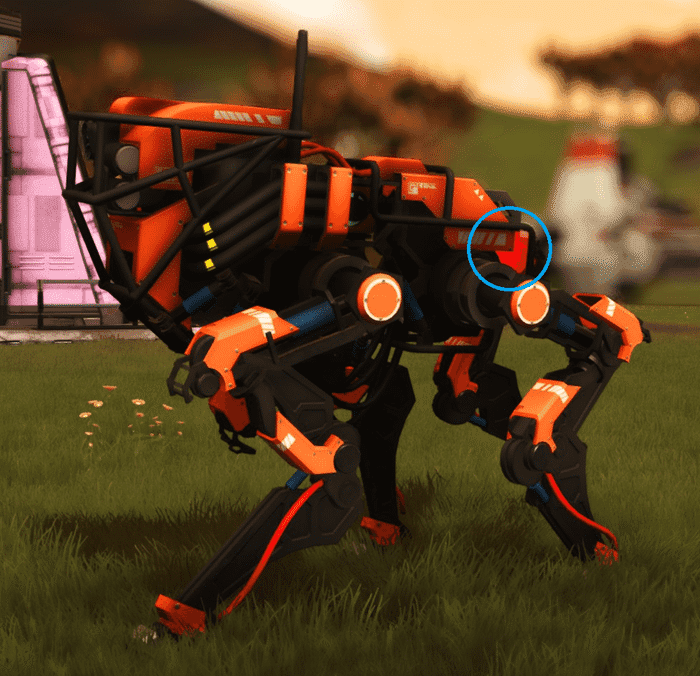 Its the red light on the butt. The hitboxes of this enemy are generally quite wonky and it tends to turn to face you. There might be other critical locations but this one was the only one that seemed halfway reliable. My recommendation: use a grenade launcher, one good hit should do. 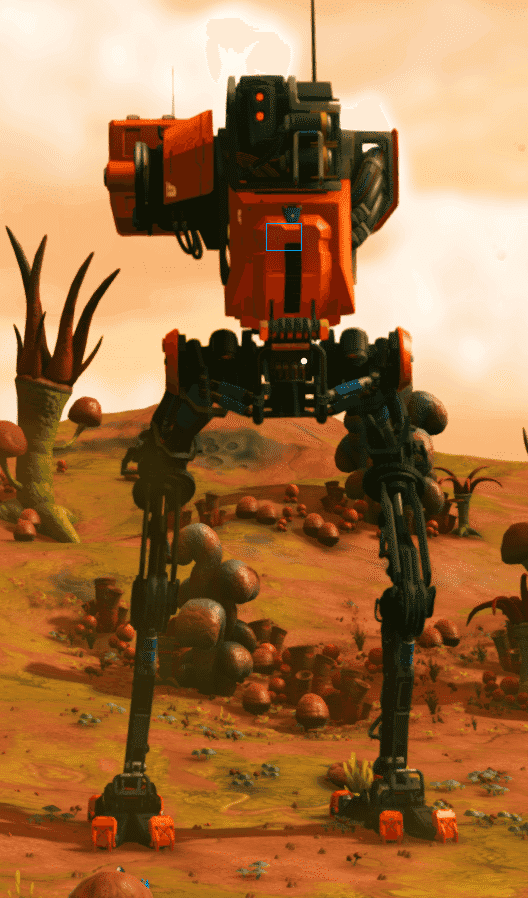 While there are critical hit locations on the leg armor, and possibly the head armor (if you can call it that), I’m going to focus on the location that will actually take the thing down. The location is below and slightly to the left of the arrow thing on its torso as seen by the blue box in the image. The hitbox seems to be slightly below the model because you have to aim at slightly different locations when shooting from different angles. The hitbox is usually pretty reliable and relatively large compared to other ground enemies and you can land a grenade on the hitbox.

As you might know, 5-star wanted levels don’t go away, like ever. While you could kill yourself or save and quit, you could also not do that. Going into space and staying in space is a good way to get yourself back to a 5-star level or dead due to attrition. When you go into space you will be placed back at a 1-star wanted level which will spawn a single Sentinel Fighter. You will want to stay near the planet or moon, kill the fighter, get back into the atmosphere quickly, land, and hide. Your new 2-star space wanted level will carry onto the planet allowing you to simply hide in a building and wait for the timer to reach zero. Depending on how fast you can save and reload the save, this may or may not be something that will save you time.

This one probably doesn’t need a picture and is relatively self explanatory, so here we go. Shoot them in the butt. Not exactly rocket surgery but you might have to lead the target a bit but your ship gives you a good indicator for that. Other than that, just try to stay behind the enemy and not get shot. Keep in mind that Sentinel Fighters have the agility of a Fighter class ship with upgrades to its Pulse Engine so it might be harder to stay behind them than the typical enemy ship and their AI seems to be a bit smarter. They also don’t drop shield restores so you’ll either want to bring a lot of Sodium Nitride or be prepared to spend the time to evade them so your shield can recharge.