Home Noita Noita: Guide for Building Your Wands
No comments

Noita: Guide for Building Your Wands

Noita is a magical action roguelite set in a world where every pixel is physically simulated. Fight, explore, melt, burn, freeze and evaporate your way through the procedurally generated world using spells you’ve created yourself.

Noita: Guide for Building Your Wands

Build the wand of your dreams with these tips! 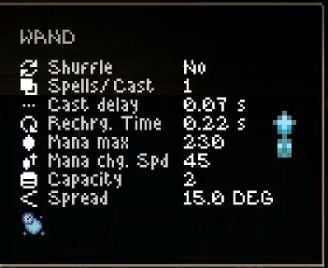 (You can hover over the stats ingame to see what each stat does, if it is not obvious).
The only non obvious things are with the shuffle stat, which I will explain more in the next picture!

Attacking spells will only use formations/passive effects, if the attacks are right to them.
So you want to place the passive effects on the left.

While using the wand, it will go from left to right, keep that in mind. This is only for wands without shuffle though.

If the wand has shuffle set to “Yes”, then it will randomly pick a slot.

If you understand what that means, then you will come to the idea to place the best passives as far to the right as possible (but still before the attacks), so that it has the highest chance of being applied with shuffle wands.

Observant readers could maybe see, that the build in the picture is not what you should do, because the passive I was hovering over is on the last slot and therefore will never be used.

I hope you learned something!