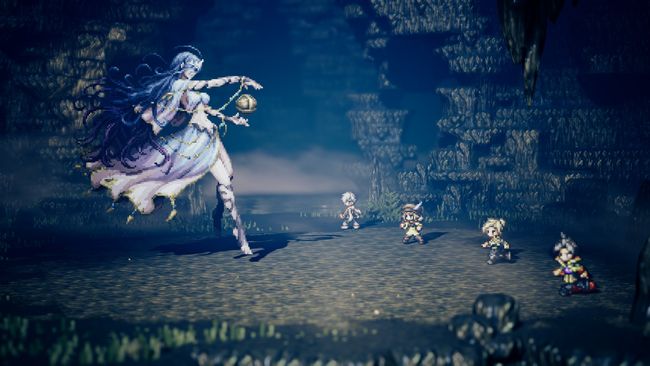 Octopath Traveler How to Beat Vanessa

With this being our, what… 6th “Chapter 2” fight, we found it rather easy. Vanessa follows suit with many of the other bosses in the game and has her two sellswords guard her, meaning you have to deal with THEM before you deal with her.

That’s OK though, as they aren’t too hard. As you can see, Ice Attacks are likely the way to go with them as your Scholar party members can very likely hit them twice per turn (and if you can do that twice per round, you can waste their shield points away). Bow users may get lucky with the multi-hit bow attacks as well, although that’s much more random. Save your Scholar’s Boost Points for when the two sellswords are broken though as you can boost a dual-hit Ice Attack to really take them out.

In the meantime though, Vanessa isn’t going to stay still. Being an Apothecary, she has a lot of different concoct abilities she can use. A lot of these are status-inducing, so having Alfyn “Rehabilitate” people is going to be a common theme in this fight (you could also have people use items, but remember that rehabilitate prevents status ailments for 2 turns as well!). Her most dangerous attack is her “Concoct Explosive” move that can hit the whole part for 400+ damage to all, but at this stage in the game that should be rather laughable (one cleric spell can deal with that easily enough). There’s always the worry of that and the Sellsword’s using “Slice”, but as long as you have 1,000+ HP you should be OK in this fight.

As you may have guessed, Vanessa can call in re-inforcements, so when you do get to her lay it on thick and take her out! You may have to deal with another round of sellswords, but if you stay on top of healing status effects and keep your health up throughout the fight you should have this easily.

Let’s go over her attacks:

Overall, this is a pretty easy boss fight, as long as you don’t let the status effects get out of control (always prioritize healing them!) and keep your HP up. Do that and you will likely have a fairly easy time with this fight (especially with our tip on bringing spear users earlier in this section!).