I’m Asahio. An EU player that started playing on the public release of Omega Strikers.
I’ve climbed rapidly from Rookie to Challenger in the first week of release. Currently I’m Mid-Challenger.

In this guide, I will go over:

Understand though that this guide will not go over everything in full detail. It assumes you have a basic knowledge of Omega Strikers and are familiar with some of the terminology used.

First of all, I would like to clarify my play-style in detail. So you can understand if this guide for Aggressive ‘Omega’ Forward Era aligns with what you expect, or how you want to play.

Supportive Era
Supportive Era is the Meta. Many people play her on their own field / in the middle of the field and focus on passing to their other forward. The reality is that playing like that has its negative sides. Which for me, isn’t how I want to play Era:

“Aggression”
My aggressive play-style does NOT focus on K.O.’ing opponents.
This might be confusing as the guide is called “Aggressive”.
I believe there are 2 types of aggression in Omega Strikers:

1. Core Aggression: focusing most of your abilities and movement on controlling the core. Ideally, you want the opposing team to feel out of control, reacting to where you are on the field and what you decide to do with the core (angle, speed, direction, passes,…).

2. Striker Aggression: focusing your abilities to K.O. enemies and oppress their player count. Disallowing them to move, intercepting their passes and overall being a nuisance.

This entire guide and my personal play-style is all about Core Aggression. I believe that it’s one of the strongest ways to play the game and many aggressive players are too blinded by K.O.’s to properly play around the core.

Positioning
A core principle is to understand that you are supposed to be on areas in the field where other strikers (enemies AND teammates) are not. You are responsible for being in a position the goalie can reach you easily, and the goalie is responsible for getting the core to your position.

The closer you are to the opposing goalie, the riskier you play, but the more opportunities you get to score a goal. Ideally you want to be around the edge of the opponent’s goal area. This will give you a lot of leeway to catch passes, rogue balls and dribbling room.

Most people run this build or interchange Super Surge with Stacks on Stacks.
The reason this build became as popular as it is, mainly comes from the bursts of haste it gives using your Flutter Fly and Crossover strikes. It allows you to catch cores faster than almost any other striker, do faster passes and be “everywhere” at the same time.

Its a good build if you are playing more save and supportive. However, the build loses its integrity when you are primarily aggressive and can’t guarantee continuous strikes on the core to keep Crossover active.

You are weak and easily bullied by enemy forwards. Obviously you can utilize your speed around this. But for me, this was not enough in higher rankings. People started targeting me and K.O.’s started becoming more and more unavoidable. This is where the next build comes in to play. 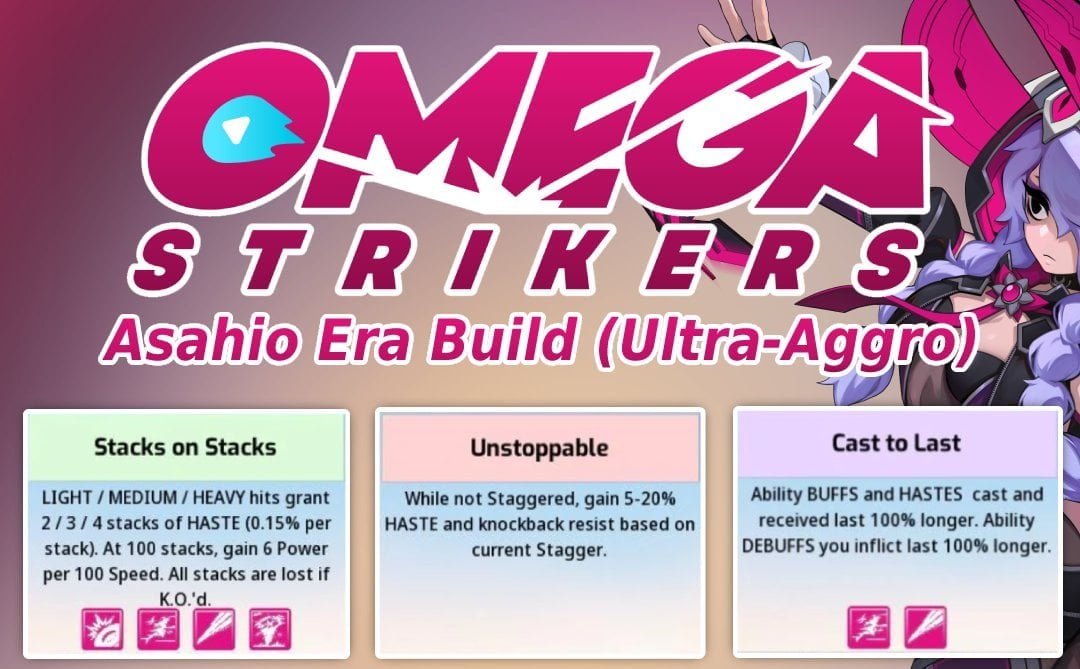 This is the build I use 99% of the time. It is a strong build that trades a little bit of burst haste into more overall base haste and power.

This build becomes more viable at higher rankings. This is because opponents will start trying to get you away from their field more consistently. If you are a known Era Aggro Forward player, you will get name-focused (they will recognize you) and know to try and shut you down.

Unstoppable is a factor that most people can not mentally take into account. You will get knock-backed less far, causing opponents that try and K.O. you to overestimate their distance.
The more they hit you, the faster you become.
This is another factor you can use to your advantage to:

This build takes time to get used to, but you will feel literally more “unstoppable” the higher your level is. There’s almost nothing the opposing team can do against it, other than focus even more on you.

After the patch on 10/06, this build became even stronger. Stacks on Stacks is easier to stack and unstoppable was untouched. 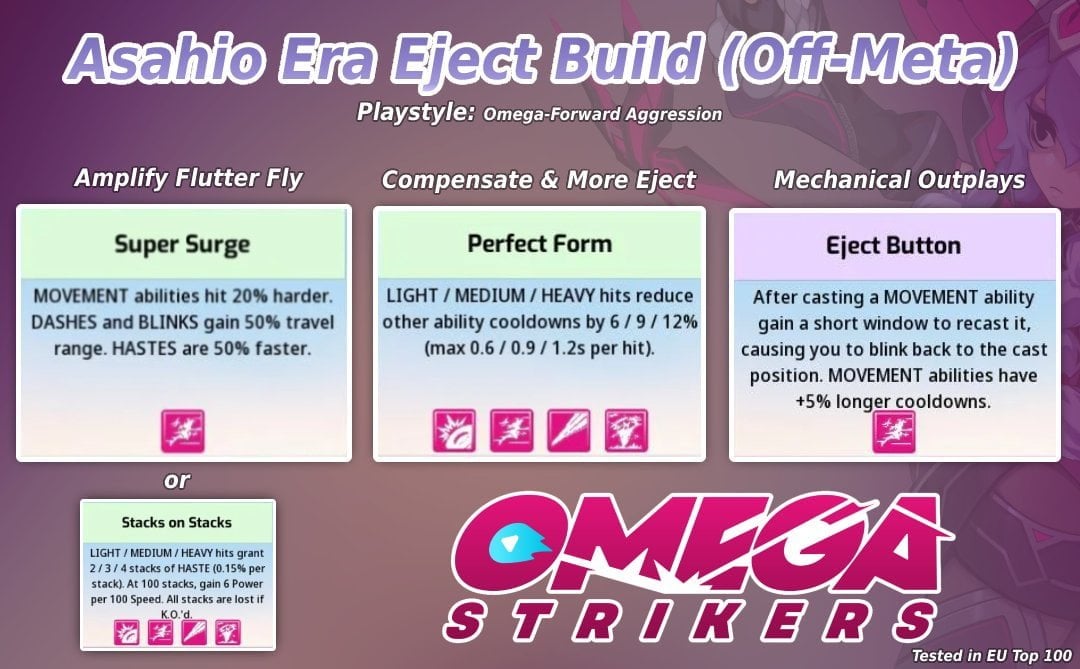 This build is gimmicky. You are reducing your support element and duration of (de)buffs. It’s an experimental build I’ve tried for a while, giving me mixed results.
I believe eventually when skill ceilings will increase more, Eject Button becomes a surprise element which can elevate your Era game-play to new levels. Don’t take this build too serious for the moment, but if you are looking for a new element to play around: Eject Button can generate some really nice mind-games with the opposing goalie and improve your positioning at times.

After the patch on 10/06 this build has become more viable due to the removed CDR increase on Eject Button and increased CDR on Perfect Form, I believe Super Surge is now exchangeable for Stacks on Stacks.

Dribbling
Era is extremely good at dribbling (hitting the core against the wall and catching it again, then repeating this until you are close to the goalie) due to Fluttery Fly and can throw goalies off if they expect you to instantly shoot the core forward.

Side to Side
Use your mobility ability Fluttery Fly to move from one side of the enemy goal to the other, while striking from corner to corner. Most of the time you will be quick enough to do at least 2 strikes. Unless the goalie does a straight pass.

Double Hit Beam
Use your beam in the direction of the core when striking to the goalie, to hit it directly after the goalie tries to strike it away.

After Hit
This is something not unique to Era. When the core is going at a slow to mid speed towards the enemy goalie and nobody is around you, simply follow the core and wait for the enemy goalie to strike, then immediately strike the core again. The goalie’s strike will be on cool-down and you will get a free goal.

Bans
I personally always ban Drek’Ar. In my opinion he is an overlooked, underrated striker that is way stronger due to his slows on not only the core but also on you. A good Drek’Ar will be able to slow down your gameplay significantly. If you are not afraid of Drek’Ar, ban whoever you have most difficulty playing against/who you lose most to. Don’t care about Meta.

If you’ve read through this whole guide. Thank you.
I want to really clarify, this build is not for everyone. Most people will feel like Support Era is better and feel more comfortable to play so. It makes sense, it is the meta for a reason.
Don’t take everything I say as factual, I made this guide based on my personal experiences.

Have fun playing the game and hopefully this guide will help you climb up the ranks if you decide to play Aggressive Forward Era!