A guide to Zhin, the Tyrant.

Welcome to my filthy guide on how to play the best flank in both ranked and casual; Zhin. I’m a Zhin main because he’s Chinese and has a sword, and also a lore that Hi-Rez doesn’t want to dig deeper.

Zhin is a flank champion, very deadly both at medium and close range. Make sure to deal damage from behind their backline and ALWAYS sneak up behind them because you can’t survive a 1v5. He is the easiest champion to use so it can take 10 matches to figure it out what is the actual f*ck is going on.

He’s slow with the movement speed of 390 and does not has the right skills for burst unlike the rest of the cast. He has Whirl which boost his movement and deal damage at the same time; make sure to use Whirl while facing the wall because Paladins’ mechanic make it so that when you face the wall while jumping you’ll jump higher; boost distance by a mile.

Inferno blade: He deals 400 damage for the first two swings and the final one is 700 damage. It has the size of a car so any of you braindead nibbas that are reading this make sure to land the final strike in case you can’t land the first two. The reloading time is 1.5 seconds, pretty slow but you can buy deft hands.

Billow: gain +20% movement speed for 2s, and cannot be targetted by everything which means you can get the f*ck out when at low health and they cannot see you because “reveal” targets you. Damage over time can be cancel if use Billow, so when a Skye sneaks up on you and spam their posion dart, you’ll know when to get the f*ck out of there.

Counter: After the removal of retaliation, Zhin’s counter became a sack of sh*t hanging on his worthless Asian behind, but it deals 600 damage and it fires a normal projectile that comes out of his inferno blade. This is very useful tool to escape when your Billow is in cooldown and you can deal an additional 600 damage!

Whirl: Deal 400 damage and can deal damage to multiple enemies, it is an important skill because you can get out of the fight and combine it with Billow and you’ll get away from tough fights farther than you think. Remember to jump whenever you use Whirl because it will help you fly further.

Spite: Deal 2000 damage to an enemy if you hits them with this for 1.5 seconds. DO NOT use this when your team got decimated because you can only deal 2000 damage and the enemy’s gonna aim at you while their healer heals your target. Use your ult to escape, it may slingshot you like Ash’s shoulder bash because Hi-Rez cares about skin contests but it worths a try. Aim your ult up in the air and use Whirl for extra distance. Guillotine will make this stronger but as long as the enemies has a good healer, you won’t stand a chance.

He has three legendaries, they are useful in some cases but some is better than the other.

Yomi: The best legendary, it makes the final strike deals 850 damage, it goes pass the enemies which mean you can deal 850 damage to multiple enemies if it hits, and it kinda has a range limit but it disappear at a very far distance. You gain about 10% of your ult charge every 2 enemies you hit, I think and I don’t want to check. Overall, best legendary and it puts the rest into the throw pick thresholds. The final strike is faster than the other two for some reason.

Smolder: This legendary heal you for 20% of your max health when using Billow, good in some cases but it doesn’t have the extra damage that Yomi give and that slows down your burst potential.

Guillotine: Only the man with balls of steel can play this legendary. It only benefits your ultimate and you can one-shot everyone with this. Deal 25% of the target’s max health and give you damage immunity while using it( it doesn’t protect you when you use your ultimate to escape). Charge towards your enemies 15% faster and no your ult charge still the same as before; use morale boost if you want to kill someone.

Now, we talk about his cards and how you can use them and build an effective deck.

Wild Fire: Reduce the cooldown of Whirl by {0.5|0.5}s for every enemy hit. Doesn’t use it much but it can be good if you want to spin a lot faster.

Viciousness: Successfully Countering an attack will generate {2|2} ammo. This card is good for you people who are running Retaliation. Now the only thing that this card is good for is when you’re using Guillotine for that extra damage or any legendary you see fit.

Up In Smoke: Increase the Speed of Billow by {10|10}%. Perfect card for all legendaries, I use this in my Yomi deck and Smolder, because it boosts your movement drastically during Billow. Combine this with Hideout will render you hard to kill but someone is following you while escaping – you’re f*cked.

Hideout: Increase the duration of Billow by {0.4|0.4}s. The best card if you want to go Smolder, it increases the duration and it will give you a better chance at surviving the match.

Heartless: Kills grant {10|10}% Movement Speed for 4s. Move faster after a kill, like as if you gonna kill someone that fast at the beginning of the match.

Kindling: Activating Whirl generates {1|1} ammo. When you fighting an enemy, and you use Whirl but only has 2 sauces left on your blade; use this if you want to guarantee a kill.

Infamy: Increase your maximum health by {50|50}. Make you durable, and mess their backline longer; I recommend it in your Yomi deck because you can deal damage longer and increase your overall survivability.

Perfect Block: Successfully Countering an attack will Heal you for {100|100} health. Another remnant of Retaliation, but if you want to survive the fight, bring this up to 3 or more.

Footwork: Activating Counter increases your Movement Speed by {10|10}% for 3s. Boost your movement speed for 3s after counter, useful but only 3 seconds; use it if you want.

Embers: Activating Billow generates {1|1} ammo. You can reload after Billow, you use your Billow to get away from the fight in the first place so why bother adding this card.

Fuel For The Fire: Whirl grants {5|5}% Lifesteal for 2s. Don’t use lifesteal cards, people are shooting at you with every cauterize effect they can get and your sword’s damage can only do so much.

Dragon Oil: Increase your ammo count by {1|1}. Useful to spam Yomi, and make you deal damage more than reload. Use it if you feel like your deck needs a filler card.

Blade Dance: Boost your maximum amount of units you can cover with Whirl, very useful when you’re trying to escape or close the gap between long range champions.

Fan The Flames: Kills reduce the cooldown of Billow by {20|20}%. Punish your poor choice if you don’t execute correctly, very useful card to bring down your Billow. Sneak behind their backline and if your Billow is in cooldown; make sure to kill their healer first then Billow out of there. DO NOT Counter and Billow after as they will damage you. Counter has a little delay which means that you’ll be vulnerable after 0.3s of Counter.

With all of that out of the way, we can finally dive into the deck buildings. I will give two of my favorite decks that I’ve made, and yes I have to log into my account and screenshot my deck. 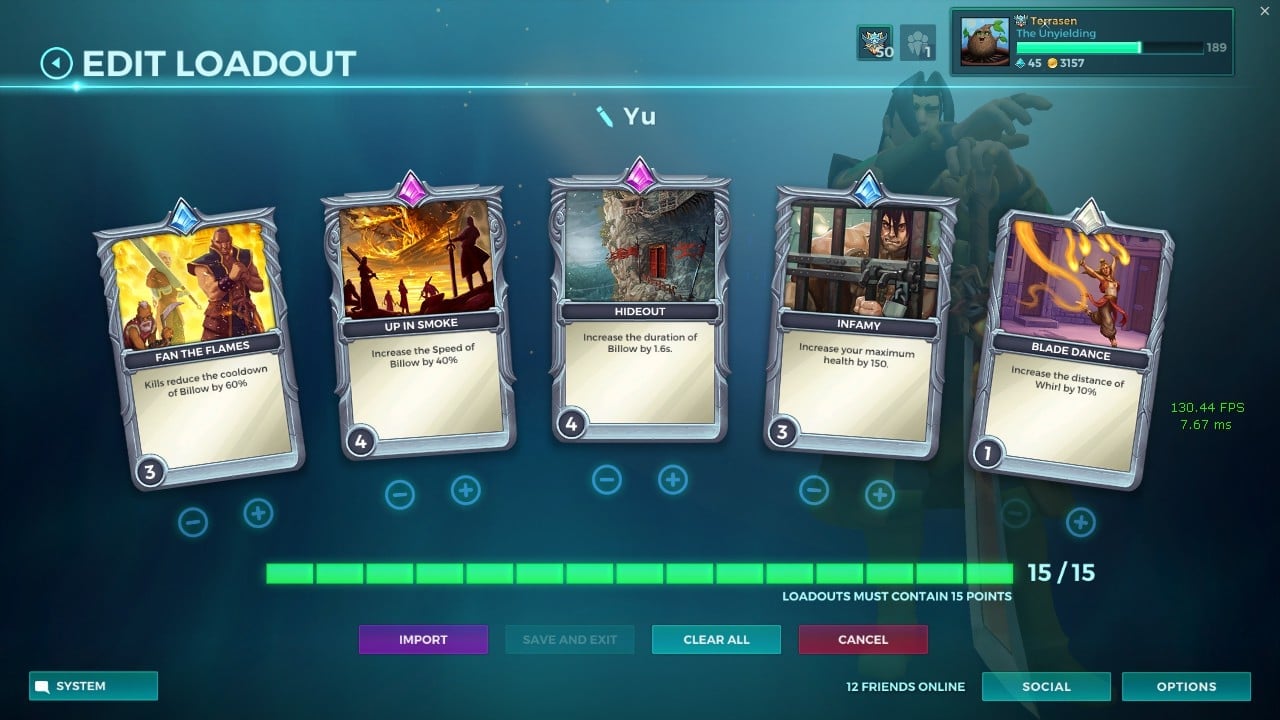 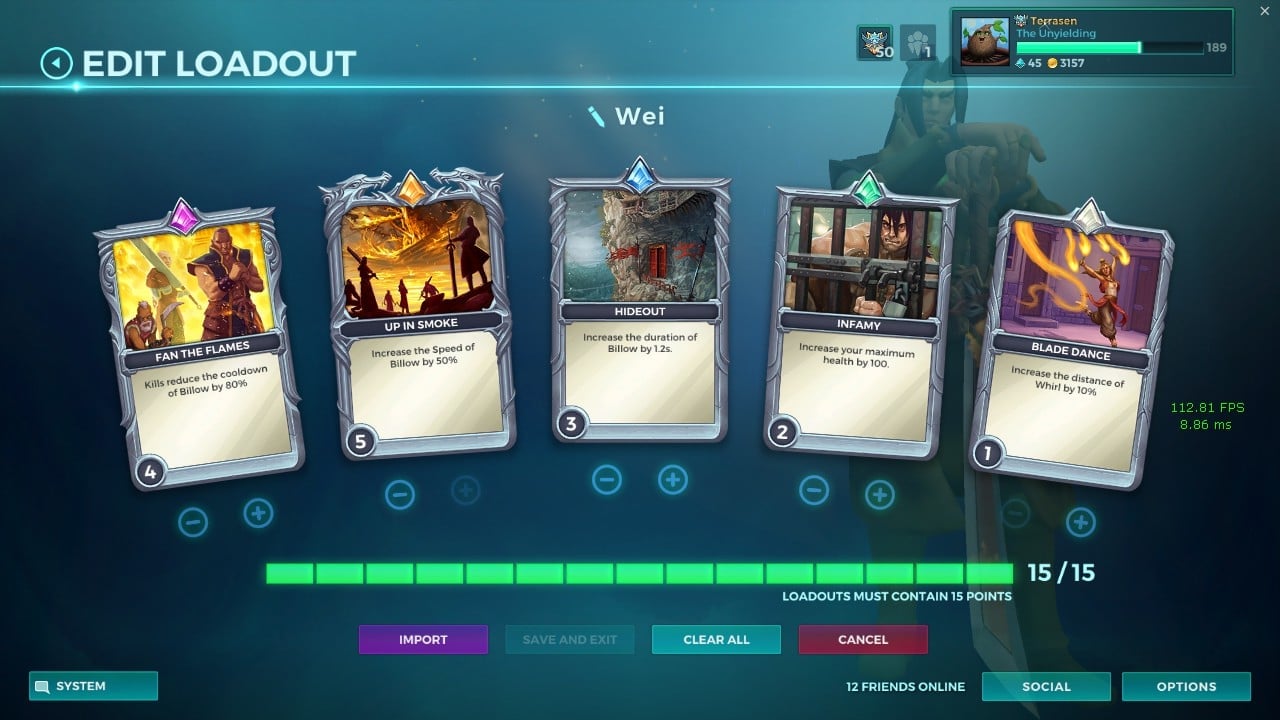 They are the products of both Smolder and Yomi, choose them as you see fit because I have 60% winrate when I play as Zhin. Paladins is full of clueless idiots so you have to practice with my deck in bot training first because bots are way smarter than these people.

I’ll show the animation skip that works with any skills.

Use your ult as mobility and if you don’t land your ult on anyone, it will refunds you 30% of your ult charge. The final seconds of the video is just me showing you how long the distance your ult can cover.

Overall, this is a very fun guide to make, share my thoughts to everyone while no one asked for my opinions in the first place. I hope that this guide will make you a better Zhin player, it’s not your fault that your team lose; it’s their parent’s fault for having a brain dead son that can’t play an FPS team-based shooter.

Remember that you’re a flank and not a damage class champion. Sneak behind their backline, use your surroundings to hide and if you play on casual press C to toggle third-person for a better view of what is going on and press C again if you want to go back to first-person. If they have a thick line of defense both inside and out, you have to wait for a weak spot to strike and if you can’t then you have to stay with your team because it’s impossible to sneak.

I love the game but the state right now is unbearable, cross-progression is live and everyone in console doesn’t know what are they doing. 90% of the people in Paladins is already bad but adding more stupid players into the servers is unacceptable.