This will be a guide for Drogoz; that greedy dragon we all know and love.

What makes Drogoz special, what are his main objectives?

Hello, today we are going to be covering Drogoz; the fiery gold-lusting lizard. We will be covering his infamous Salvo combo’s, ways to utilise his aerial movement, and much more. Being a blaster, Drogoz excels in dealing with grouped up enemies – with all his attacks doing blast damage, however, he is one of the most counterable champions; let’s get into it.

A run through of Drogoz’s abilities, when to use them, and how to maximize their impact.

Drogoz’ primary fire packs a massive punch, essentially an upgraded Evie Staff, the rockets deal 850 damage per shot, every 0.85 seconds. Each successful direct hit will give 4% ultimate charge, meaning Drogoz’ has a quickly charging ultimate – this can allow for ultimates at first point fight to take out a pesky Frontline. As with all Blast Damage, having a height advantage over your target greatly aids your chances of winning a fight, so consciously contest highground as much as possible, this will make hitting successful rockets much easier. An important tip for fighting other aerial enemies, such as Andro, is to get as close as possible, this will make hitting shots many times easier.

An extremely unique mechanic, Fire Spit has many uses – and is incredibly powerful in the right hands. Here are some situations where Fire Spit excels:

Unrecognised by some, Fire Spit marks enemies directly hit by the projectile; they will receive 30% additional damage from your attacks for 4 seconds. Ideally, you want to be shooting the fire spit for an 1000 damage burst, but this is a nice bonus for when enemies decide to annoyingly block your Spit.

Salvo is another insanely useful blast ability – allowing you to load all remaining ammo into the attack, your next fire shooting all the pre-loaded rockets; these rockets deal 250 damage per shot with a large explosion radius. Additionally, they deal 200% bonus damage to shields, this makes taking out enemy frontlines that much easier. The ability is also the key component to the infamous Salvo Fire Spit combo – it’s extremely aggravating to play against, and takes little skill to pull of successfully. Simply prime up a salvo, then fire a spit, shooting them in the general direction of the enemies and simply watch the slays come in. This combo can bring full health champions to death in a second or so, and is another great way to initiate a team fight.

From the already described abilities, we can see Drogoz is a unique and versatile champion – his aerial mobility and booster resource system just reinforces this. It’s a key component of the Dragons kit; as mentioned in the Rocket Launcher section thrust allows you to gain a height advantage, making shots much easier to hit, it also makes landing the fire spit combo a million times easier. A nice tip to conserve booster fuel is to repetitively tap spacebar, rather than hold it, this will allow you to move slightly further. Furthermore, there are some areas on maps where you can camp in the top of rooms, or move over areas, allowing you to sneak up on unsuspecting victims or avoid attacks and give an extra edge in 1v1’s. However, you need to be careful not to put yourself in very open air situations, as this makes you an easy picking, try and stick around buildings.

This ultimate is incredibly crucial – and there are a number of tips that allow you to maximize your chances of success. Firstly for some general information:

Normally, your key targets are enemy frontlines, or maybe supports. Additionally, you are the biggest counter for Ancient Rage (Makoa’s Ultimate), so as soon as you hear that the ‘Challenge’ has started, get in a safe place and hit that ultimate key. Oh; and one more thing, be very careful not to hit deployables, you can fly high above the battle to avoid the chance of punching a stray Ying Illusion… and to add insult to injury, you won’t be refunded a scrap of Ultimate Charge.

Fire Spit now applies knockback and deals an additional 30% of its damage to targets hit over 2s.

Probably my favourite talent, Combustible offers an extremely powerful playstyle for Drogoz. The Talent allows you to consecutively disrupt team fights, knocking enemies around and disorientating their aim and vision, making it the perfect way to initiate a fight. On top of this, enemies hit will follow a predictable flight path, making finishing rockets ever easier. Combustible also acts as a sort of reveal for the 2 seconds enemies burn for, allowing you to prefire corners and track enemies positions – using the loadout provided in the loadouts section, Fire Spit’s cooldown can be instareset depending on how many enemies you hit – this means the talent is a must pick when going up against teams with deployables such as Ying, Inara, or Barik, and offers a powerful method of crowd control.

With it’s recent nerf, Fusillade has fell much more in line with the other Legendaries – it is still very viable in the majority of situations. If you are very accurate with your rockets, I would still very much recommend this Card, especially on maps where you can reliably prefire rockets for guaranteed hits, for example Serpent Beach. An interesting fact is Salvo rockets also deal 25% more damage with a direct hit, making the fire spit salvo combo ever more prevalent.

Increase the Flight Speed of Booster by 40%.

Arguably the worst card, WYRM is, in my view, a bit underused. Giving a constant speed boost, WYRM is not only a ton of fun, but also makes navigating the map a million times easier. Generally you’re going to want to pick this talent when facing a multitude of slow projectile champions, like Evie or an enemy Drogoz. Overall, I think the main disadvantage of WYRM is that speed is countered by something that cannot be judged by simple means: good aim (apart from Lian, of course). This overall makes WYRM a more unreliable pick, and hence explains it’s rare use.

Recently buffed, Reign Of Terror is now relatively viable – similarly to combustible, Reign Of Terror excels against deployables; with a certain card loadout, if you hit more than 3 enemies, you can instantly reset the cooldown… This makes controlling chokes and small points incredibly simple & effective.

General notes on what to purchase with credits. This section is to show you some good Items to buy on Drogoz. Obviously these are subjective and can change depending on the situation!

What You Should Buy For Drogoz?

Early Game – As for any class bar Support, I would recommend investing into early Cauterize – however Drogoz is also a viable Wrecker, so if the enemy team has a number of shields and your teammates can’t pick Wrecker up, feel free to.

Late Game – After a red item, I’d heavily recommend picking up Haven; your biggest counters are all hitscan / direct damage, so Haven will do a great job at giving you the extra edge in fights against them. Of course make the judgement between a blue item yourself since they are all situational and dependant on the enemy team’s draft. After a blue, I would recommend either Rejuvenate if you are in need of extra healing (especially a Jenos), then you can stack into a Yellow item. Nimble is a viable option, and allows you to navigate the map much more frequently, but really any yellow item will do – as seen in the Itemization figure. 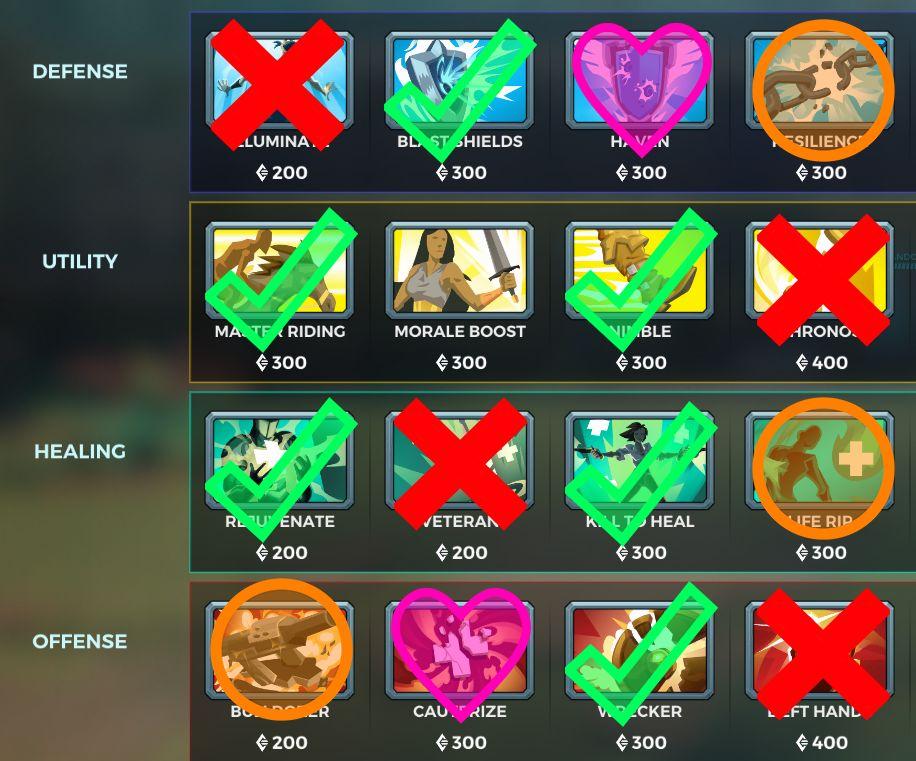 Tips on how to use Drogoz, special circumstances, etc.

There are quite a number of useful tips that you should always keep in mind when playing Drogoz. Being one of the most Aerial champions in the game, there are ‘flank’ routes that can’t be achieved by Ground Based champs – most well known is the roof on Bright Marsh, many a time have I glided across the hay roof to rain down a Spit + Q combo, they never suspect a thing. There are many more of these spots on different maps, for example on maps like Serpent Beach.

Being arguably one of the most counterable champions in the game – as a Drogoz you need to learn how to deal with enemies that openly have the advantage over you. You can do this by slowing down your playstyle a little bit, and focusing on putting yourself in favourable situations and doing damage from further back; sometimes just spamming rockets down a choke will do much more for the team than you running in to get a Kill and die – in the open air, you are a sitting duck. There’s also a certain amount of skill involved when playing against snipers – try not to challenge popular sightlines, and instead use your Fire Spit and Salvo to create pressure when they can’t land shots on you. Combustible excels in displacing and distracting snipers from doing any further damage to the rest of your time, not to mention it majorly messes up their aim.

A large part of the skill needed to play Drogoz well is involved in reliably hitting fire spits from all sorts of angles – I’d recommend visiting the shooting range and practicing shooting fire spits while falling, moving or ascending, do this until you get a feel for the speed and slow drop of the projectile. I guarantee this will give you the edge in a number of matchups, and will help you get the hang of more complicated & long range Fire Spits.

Drogoz in ranked, when he is banned, who he might counter, who counters him.

As of now, Drogoz is a top pick, top ban. He is extremely strong, but in my eyes, takes the spotlight a bit too much – he is very easily counterable, but has a relatively low skill requirement. A champion like BK on the other hand, has a very high skill requirement, but is not really countered by anything to the level of Drogoz. Overall, Drogoz is a very map and draft based pick – on maps like Jaguar Falls and Bright Marsh, he’s extremely solid, however on Timber Mill he is merely a dead-man walking. I’d recommend trying to wait till later in the draft to pick him on his worse-off maps, however if Snipers are banned, and your team can pick up Lian and Drogoz, in my eyes that’s a solid pick. On the other hand, a good Drogoz can devastate the enemy even if they have counters to him – lots of his counters have high skill requirement, eg. Andro and Snipers, which means you normally have a bit more breathing room – just play carefully and abuse blast to avoid enemy sightlines. Not to mention he offers one of the biggest counters to Makoa, being able to counteract his insanely powerful ultimate. Overall, I would recommend banning Drogoz on his good maps, if he is open, don’t just blindly pick: think carefully about the draft and how you can avoid being put into a bad situation.