This is a brief guide written by No.1 Fernando in order to help players in using him to his complete potential.

Welcome to Fernando guide, also known as Cyberbulling 101. Fernando is a top tier tank with a huge damage output. He is at par with the likes of Makoa, Khan and Inara. Even with 4600 HP, he has one of the highest effective health pools ingame. He has the best shield ingame that can completely block attacks from a side while he regenerates himself. His kit makes him a true knight of fire.

Frontlines usually have a very short range of attack, and Fernando has the least of them all after Terminus. This requires him to dive into close range and get branded as “Dumb Flanknando” all the time. A good fernando is one that can neither be classified as flanknando or tanknando. It’s one that frontlines and helps the team in all aspects. 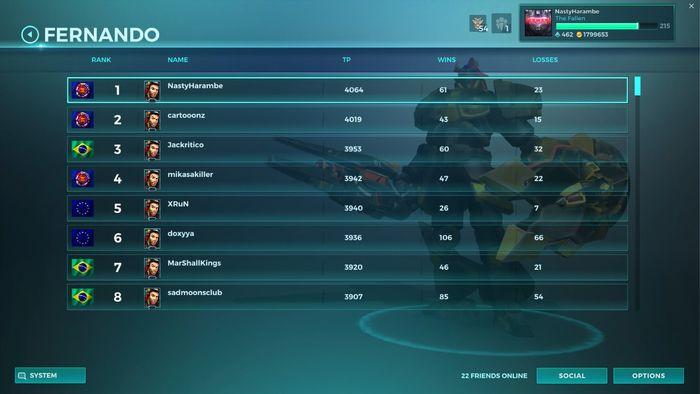 Scorch Fernando is the best way of playing Fernando. People can argue against it by telling that “People don’t usually let you stack your fireballs”, but trust me they do.

Coming to loadouts, there are a few mandatory cards and a few situational ones. That’s why creating more than a single loadout is always recommended.

1. Incinerate V: Why would anyone want to miss out on a 3 second cooldown for fireball? Maxed out Incinerate lowers the cooldown from 6 seconds to 3 seconds. This lets you annoy all your opponents with rapid spam.

2. Last Stand II: If you don’t have this in your loadout, you’re doing it all wrong. After diving into their backline, you need to retreat instead of dying. When opponents take out most of your health and try to finish you off because you’re low, you gotta show them they’re wrong. This is when you take out your shield out and start healing yourself till you’re back to half health.

3. Hot Pursuit (V/II): “Frontlines lack speed, they can’t dive.” That’s where Fernando and Makoa come up with a straight slap on your face. With the cooldown of fireball reduced to 3 seconds, maxed out hot pursuit lets you have 50% increased movement speed for 66% (2 seconds) of your combat duration.

4. Heat Transfer I: After investing heavily on other cards, there’ll be a card on which you can only spend a single point on. The best for this purpose is Heat Transfer, that reduces the cooldown of your charge for each second that your shield is up. Now, charge is an ability that’s both defense and offense, so you gotta choose which according to the situation. 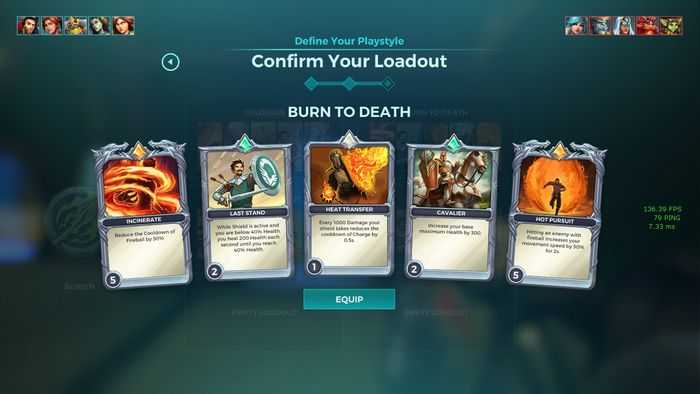 1. Brand V: Oh, a controversional card. The ideology of this is simple. If you’re using brand, then invest 5 points on it or just don’t use this card. With this maxed out, you’ll be applying 75% cauterize through your fireballs. Do not buy cauterize if you’re using this card, it’ll be a waste of items. Hence, brand 5 is a situational card that you’ll use when you need to buy Bulldozer for Inara or Barik or Wrecker for Torvald or Ruckus.

2. Immovable Object V: The same goes here, if you’re using this card as resilence, you need to have it maxed out and you’ll not buy resilence ingame later. Some teams are heavy on crowd control, with champions like Bomb King, Maldamba, Pip, Ash and Khan.
PS: It doesn’t work against Inara’s or Tyra’s cripple, because those are debuffs and not duration based.

3. You might’ve noticed that you can add only one of these to your loadouts, so in situations where you need both, it’s better to buy either Resilence or Cauterize depending on the card you dont have. If you aren’t using both of these cards, then you’ll have an extra card that you can add. Understand your playstyle and add the card whose effects you need. 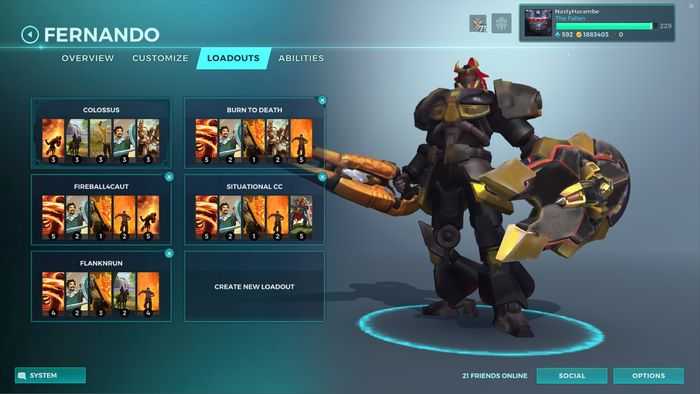 Fernando is a tank that can be played in all the maps but his potential varies. The 2 things that matter for him are the tightness of the map using which he can stack fireballs and the amount of time he requires to dive in and out of the backline.

Coming to team compositions, Fernando’s only real counters are ones from his own class or to be more precise, the ones that can cancel his shields: TERMINUS and KHAN. Among supports, Furia’s pyre can cancel his shield. As for damagers, Bomb King and Drogoz are your worst nightmares. Among flanks, Maeve’s pounce is a big nuisance to you.

Fernando is pretty weak to be a solo tank, unless you’re playing on a tight map where you can beat your opponents through brute damage.

To make the most out of Fernando, you must have a tank strong enough to hold the point and prevent any sort of retakes and what better point tank than an Inara?

PS: The most effective way of drafting tanks in ranked is to ban Khan, giveaway Makoa to grab Inara and Fernando: The tankiest and the diviest frontlines.

PS: Khan comes under neither categories, he’s a support tank that must always stick with the team.

Now that you’re done with all the pre-game stuffs, what you do ingame is the thing that matters the most. Frontlines have a lot of work to do and they control the pace of the game.

As a Fernando, you must be doing one of these things at any given moment.

1. Protect your backline from opponent threats: Everything except frontline is a part of the backline. The easiest approach to winning is destroying the backline and then outnumbering the frontlines that are left. Protecting your backline doesn’t always mean protecting from a flank but flanks are your biggest priority target.

Frontlines have the ability to beat flanks as hard as damagers have the ability to beat frontlines. Once their flank is dealt with, you’ve pretty much protected your backline. You need to have your eye over everyone’s position to do this effectively and also help your teammates know opponent positions by using the VGS system. Don’t be surprised when their frontline or damager comes to flank your backline, flanking is something everyone can do and not just the champions from that class.

(Since people in lower rankeds have classified “Mid” and “Flank” as the only 2 things ingame, you can easily make your way through to platinum as a Frontline, especially nando or koa.)

2. Bully opponent backline: You should play along your damage/flank for doing this, your job is to seperate their backline from the frontline. Bullying doesn’t always mean you need to get the kill, you just have to prevent them from doing their roles. Surviving is very important and be ready to fall back any time you see them grouping up to beat you up.

(This is why 2 man parties with one tank and one damage/flank is the best party that you can form and play in ranked. )

3. Help your in team in point fights or payload pushes: This mostly happens in the climax where a major 5v5 goes down, like in a 99-99 objective capture or an overtime payload push. At this point, a frontline’s duty is to have a heavy amount of presence and buy space for the team to do its stuff, you should poke everyone with little damage, shield your team once in a while, and lead out a proper ultimate management.

4. Zone your opponents after securing the point: When you’ve cleared out the opponents, it’s best to have EITHER your point tank or your support capture the point or push the payload, while the remaining team moves a bit ahead and dismounts them to buy time.

Zoning decides the outcome of the game, you either end up getting killed and turning things into a 1v5 for your objective worker or you dismount them and gain space without anyone from your team being taken down. Again, your work is only to dismount them and deny space, not killing them. The opponents will try to be sneaky and get into the point somehow, and even if one of them manages to get in while your team is somewhere far away, then you’ve failed in zoning.

1. The Moonwalk: You can get back to 40% of your health with the shield up, so not getting bursted down with shield is a very important thing. When you’re in the need to retreat but you can cover only your front using your shield, you jump-turn back-charge-turn front. You need not be perfect in this as long as you’re able to survive, but this ensures a safe retretat.

2. The Longrange snipe: Your fireball has no range, it can go as far as the map lets it go. Even though it’s just 585 damage, it’s enough to make their squishies consider backing off. You can do crazy things like outsniping a Strix on timber mill or landing a kill on Evie as soon as her ice block is down, or perhaps even timing it for Zhin’s billow.

3. The Afterburns: Your flamelance does 200 damage over time and using this you can finish off targets that think they can go really low and then retreat. Ohh poor lex.

4. The Flame: “I’ll keep burning and burning them”. Nah, if you’re having to reload then you’re missing out on all the damage you could do while reloading. Burn for a while, fireball them while your ammo loads and continue the roasting.

5. The 0 damage ultimate: A viktor is using his ultimate on you, gosh you’re gonna die. You’ll take 0 damage from it if you move backward while your shield is up.

6. The Hardcore Charge: Your dash can be used as both retreat and a push. It does 200 damage as well, as if the afterburns weren’t enough. Using all these set of moves at once, you’re pretty much a monster.

7. The Ultimate: If you’re using you’re ultimate alone, then you’re wasting it unless you’re able to secure at least 2 kills before ending up dead anyways. Your ultimate is what steals the momentum from opponents during the climax scenes. Your ultimate isn’t just an ultimate, it’s an ultimate-canceller. Give opponents the hopes of getting the kill on your ally, bait them out and make them the ones that die.

8. A fernando fighting frontlines is a waste of his potential. Fernando is one that makes the backline vanish and make the opponent frontline face despair.

Fernando is the PIP of all tanks, he’s a jack of all trades and can do just about anything: He attacks, he flanks, he defends and he heals himself. Fernando is a reliable tank in all the ranks.