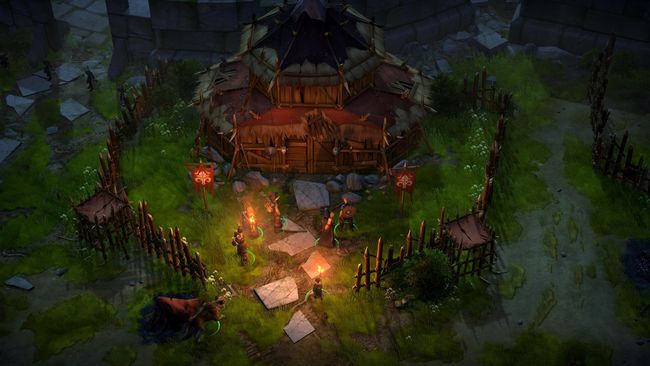 Nok-Nok and the Trouble with Goblins

If you took Nok-Nok in your squad, he will come to the throne room and ask for help sooner or later. Take a goblin with you and go to Oleg’s Trading Post. Talk to Nok-Nok’s kinsmen and decide whether to kill the giant or ask Nok-Nok to get rid of him. In any case, the quest will be completed, and you will get 1200 experience points.

However, if you allow Nok-Nok to send the giant somewhere, he will offer him to visit the capital. After a few hours of in-game time, you’ll get messages that citizens of the capital are having trouble with the giant (certain kingdom parameters will decrease). To make the capital safe, return immediately, go to the throne room and find a new card ‘’Munguk’s Drunken Rage’’ in the events. Appoint an army advisor to chase the giant away along with the army. Another advisor won’t be able to do anything! If you ignore the problem, the capital will fall after a while.

Tip: Munguk may terrorize your town several times, so we advise you to attack and kill him at the first meeting. Ideally, avoid completing this quest because if the giant does not head to the capital, goblins will come.

Nok-Nok and the Great Mother Quest

This quest starts shortly after you complete the Nok-Nok and the Trouble with Goblins quest and only if the goblins settled in the capital after you let them go. Talk with Nok-Nok, open the world map and you’ll see a new location to the west of the capital — the Goblin Clearing. Go ahead until you meet Nok-Nok. Again, you need to talk with him and then decide whether you let goblins build their shrine or not. A series of quests will be postponed if you let goblins do that or they will end if you don’t.

Nok-Nok and the King’s Return

Nok-Nok will visit your throne room a few days after you complete the Nok-Nok and the Great Mother quest and only if you let goblins build their shrine. The guest will tell you that the dead goblin king came back to life. Go to the Goblin Clearing with Nok-Nok alone (this is where the goblins have built Lamatsu’s shrine). Soon you’ll meet the goblin king. After you show your concentration skills, you’ll find out that the king is none other than a demon pretending to be the goblin king. Now you should either kill barghest or try to deal with the enemy without a fight. If you choose the second variant, then Nok-Nok will have to spill blood. That will make the elf confused.

Barghest will run away (this doesn’t have any effect on the later events). Return to the capital, talk with the goblin and tell him that he can become a Royal Droll. Here the quest will end.