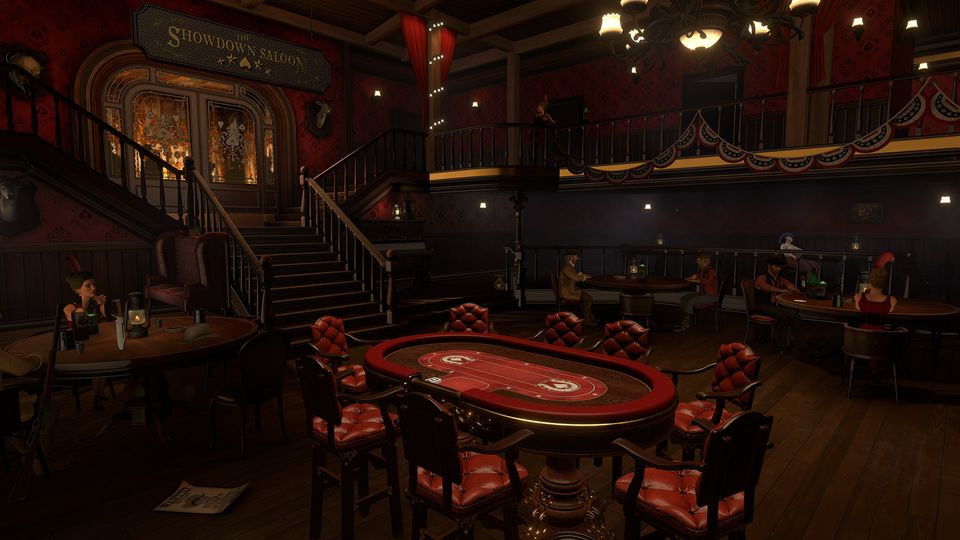 This guide is primarily to explain how to get into a game and how to play a game, since no tutorial currently exists. Hopefully this will be corrected later.

Importantly, this guide does not explain the basics of texas hold ’em poker. It is only intended to explain how to do what in VR on a Vive.

The Lobby and the Wheel

When you start, the first thing you’ll want to do is get some FREE CHIPS. There’s a wheel in the centre of the room you can spin to get them.

Teleport over there by holding and letting go of UP on your trackpad. You may have to press it twice, once to bring up your teleport arc, and then point to where you want to go, then press it again. Holding UP might work, I don’t know, my trackpad is a bit broken. Thanks HTC.

To spin the wheel, you’ll need to get relatively close to it, near where the pink pointer is above the dollar sign of the value it’s pointing to. Teleporting to it can be a bit of a pain to get just right. You have to teleport onto the edge of the wheel, and while you’re holding the teleport button down, when you have the teleporter destination in the right spot on the edge of the wheel, it’ll automatically change to a new icon and move itself slightly away from the wheel (bizarrely). If you’re too close, teleport away from the wheel and try to teleport back.

The small pylon appears at the edge of the wheel. What you’re meant to do here is grab that pylon with your hand, hold GRIP, and give the wheel a spin! Just as if it were a real wheel. 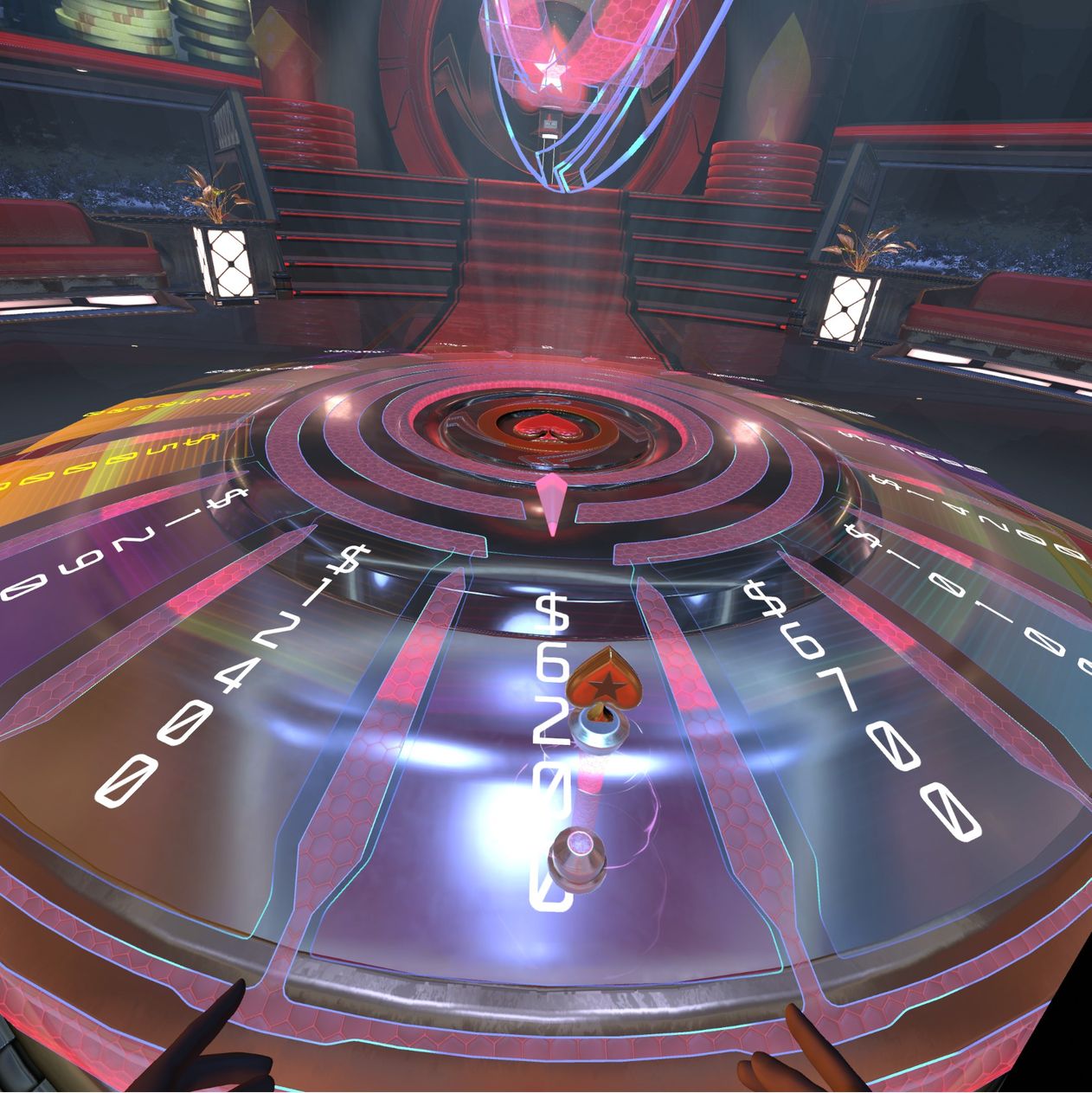 You can see the pylon’s positioning in this screenshot. Taking a perfect screenshot in VR is a nightmare!

This is your only way of getting more chips (except for winning them). Once you run out of money while playing poker, you’ll need to wait out the 8 hour timer to get more (spin twice daily if you can). Bet wisely!

The menu can be accessed and toggled on or off with the MENU button which is your wristwatch. Look at your left hand and tap your watch’s screen with your right hand until a menu springs out of it.

There are a few settings here you may want to look at, notably your Avatar so that you don’t look like a pure white silhouette. To get into a game though, tap LIVE GAMES and then find a table with an empty seat, and tap JOIN TABLE.

At the time of writing this, “QUICK JOIN” on that menu does not work, do not use it.

Buying Chips
When you arrive at your table, you’ll need to get some chips. There may be a hand already in play, you cannot join that hand.

To get some chips, open your wristwatch menu, go to chips, then go to BUY CHIPS on the right. There is an “Auto Rebuy” option in the settings of the wristwatch menu; personally I do not use it since I want be able to quickly choose if I want to bail out of the table if/when I run out, and you can always manually buy more chips anyway.

Wait till the current hand finishes, you’ll get your chips, and you’ll be able to begin.

Look at your cards – Use TRIGGER on your cards and roll your controller away from you (don’t lift upwards) to look at them. Don’t worry, nobody else can see them no matter where they look. Even if they take a photo with the game’s camera, they can’t see what you have. The exception is when there’s two people left in the round.

Raise (or Bet) – If there is already chips in the circle and you wish to raise, just pick up an amount from your chips with TRIGGER, and throw them in. The call amount in the circle will automatically throw themselves in as well. For example, if the circle has a $25 chip and you want to raise to $100, you’ll need to throw in $75 (3x $25 chips) from your chips.

Check – A green tick marker appears in between your cards and the river when you’re able to check. Tap it once by moving your hand over to it, and it’ll turn from green to red, tap it again to confirm you want to check. Remember you should always check instead of folding if you can.

Fold – Pick up your cards with the GRIP button and throw them in the centre. Note that even if you hold up your cards to other players this way, they cannot see what you have until there are only two people left in the round (eg. if there are 3 players and 1 folds, the remaining 2 players can show each other their cards).

Increase/Decrease Chip Value – Understand the denominations – $5, $25, $100, $500, $1000. Chips can be converted by picking up a chip or several chips, rotating them so that your wrist is facing you, and tapping the new icon that appears. For example, you can convert 4x $25 chips to a $100 chip by picking up exactly 4 $25 chips (no more, no less, precision can be tricky). Picking up a single chip, rotating your wrist, and tapping the icon can convert that chip into its lower denomination.

Re-centre View – Move your head where you want to be and press DOWN on both trackpads at the same time. You can do this as many times as you like until you get it right.

Show your cards – To flip your cards over so other players can see them (only when there’s 2 people left in the round), press GRIP to pick them up (as if you were about to fold) and press UP on the trackpad to flip them. You can press UP again to flip them back. If there are more than 2 players left, other players will see the cards flip, but will not be able to see what your cards are. If you leave them face up on the table, there are rare cases with 2 people left where your opponent will be able to see your cards.

Is it my turn?
In most rooms (except the Void), there is a very thin gold line on the table and a section of it glows next to the player whose turn it is. In the Void, the player’s area becomes encased in blue. Look for it carefully so you can easily keep track. Also look for the circle where your call chips appear.

Leaderboards
The leaderboards are based on your net profit winnings, not your bankroll.

Any money you get from the FREE CHIPS wheel is part of your bankroll, not your winnings.

You can view your net profit winnings by going to the MENU, then on the TABLE tab (while at a table), click on yourself. You can see your stats here, including LEADERBOARD RANK. 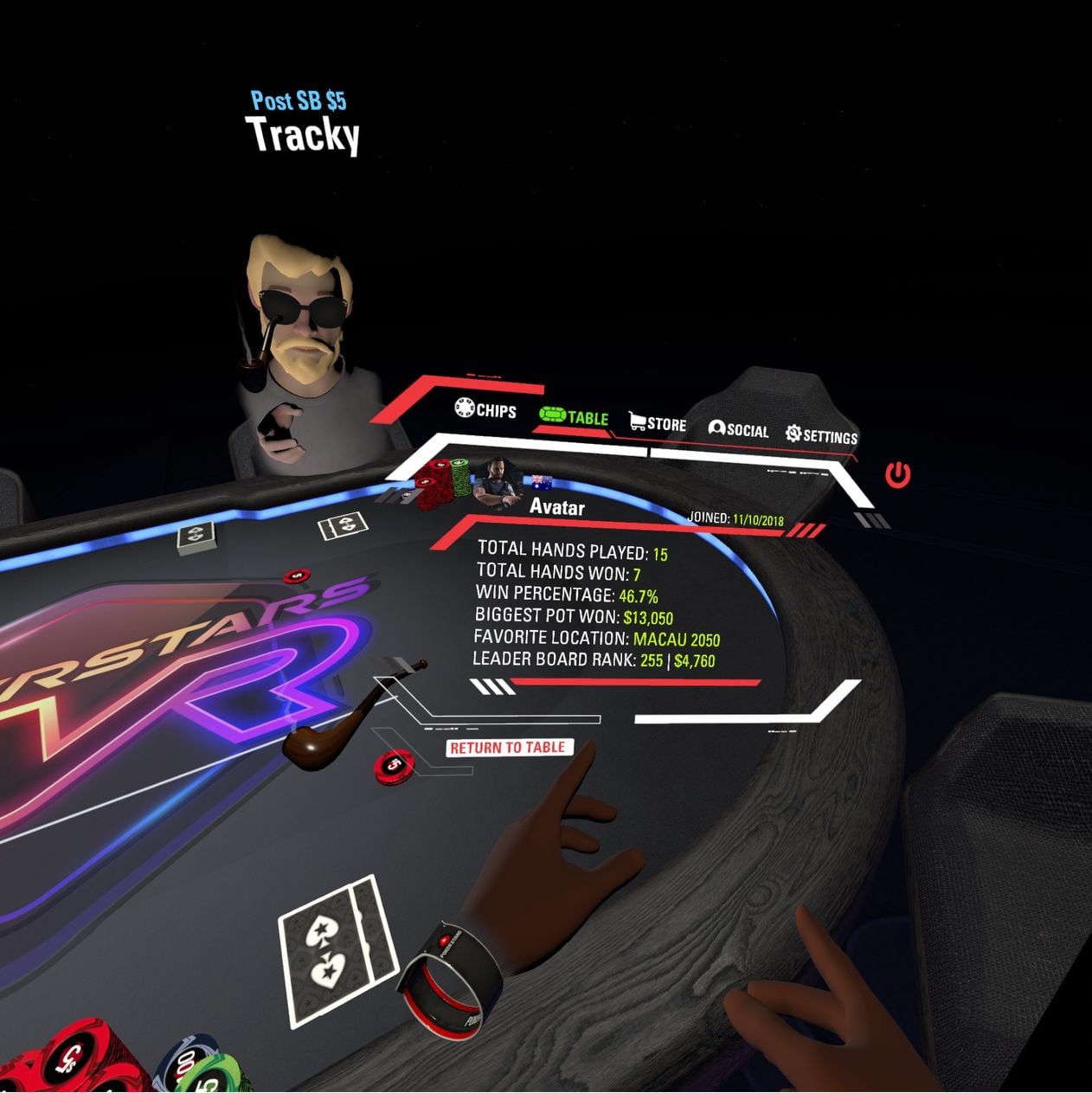 Buying Gimmicks
I’ll only cover one point here briefly, because gimmicks like guns and fireworks are usually abused and annoy the♥♥♥♥♥♥out of me after a while, so someone else can write up an extensive guide into what works with what.

When you buy a gimmick from the MENU’s STORE tab, you are not paying for it with your bankroll that you use to play poker.

Instead you have a separate currency called VRcoins, you can see it at the bottom of your store page. You earn VRcoins by playing hands or winning hands. You get 1 VRcoin by playing a hand, and 1 extra VRcoin if you win the hand.

Taking Photos
The camera gimmick isn’t a regular gimmick you buy in the store. In the menu, there’s an option on the left hand side under SOCIAL next to the twitch icon that looks like a camera.

Any photos taken with this camera become real screenshots, located in
(your “Pictures” library)/PokerStarsVR_Photos

You can use the trackpad directions to either move the camera further away or closer, or to spin it around so it’s facing you or facing away from you.