A complete walkthrough of Cruel Dude Thesis with all secrets and poster unlocks. (+boss guide)

Upon your entry into the level, you will start off in an elevator that will take you downwards.
You’ll stop in a room with all the weapons you’ve come across throughout your brain journey.
There’s a Quick Pillz here too, be sure to get it if you want to make the fight as painless as possible. 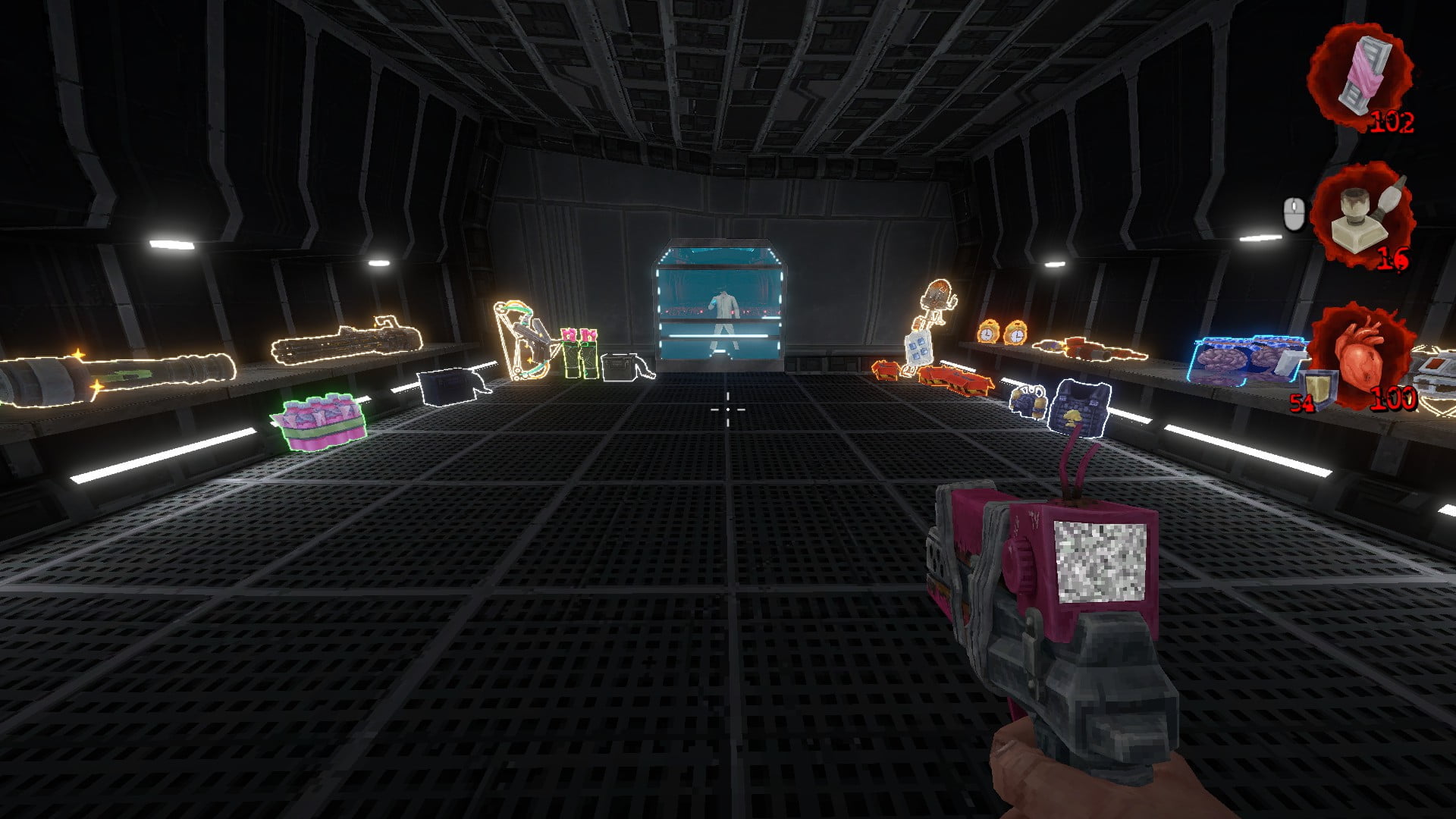 If you turn around to look at the elevator that you had just gotten off from, there’s two posters on both of its sides. Don’t forget to grab this before you continue to the fight. 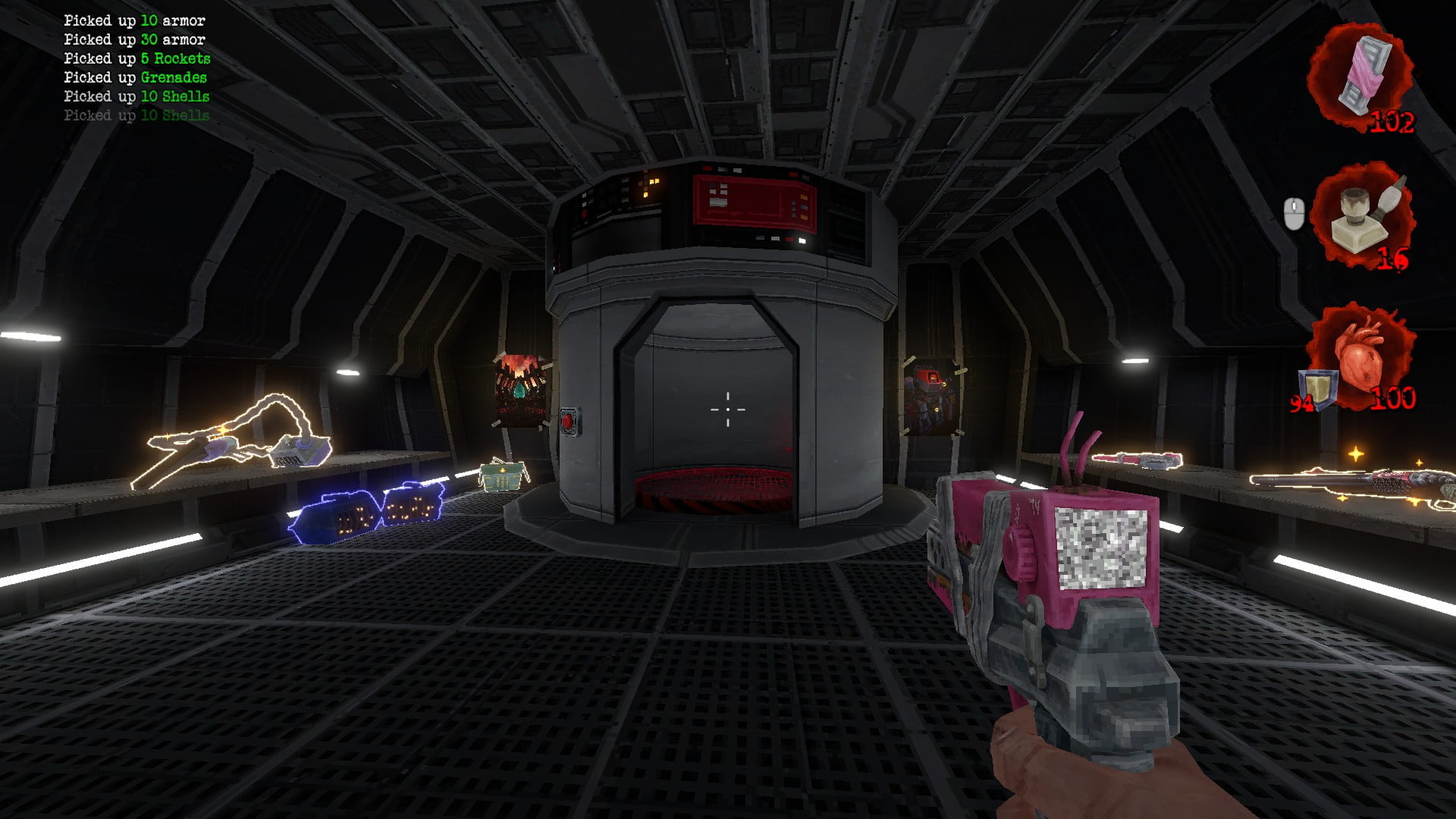 Poster #3: The Other DUDE

This poster is found on the wall that’s right underneath the robot. 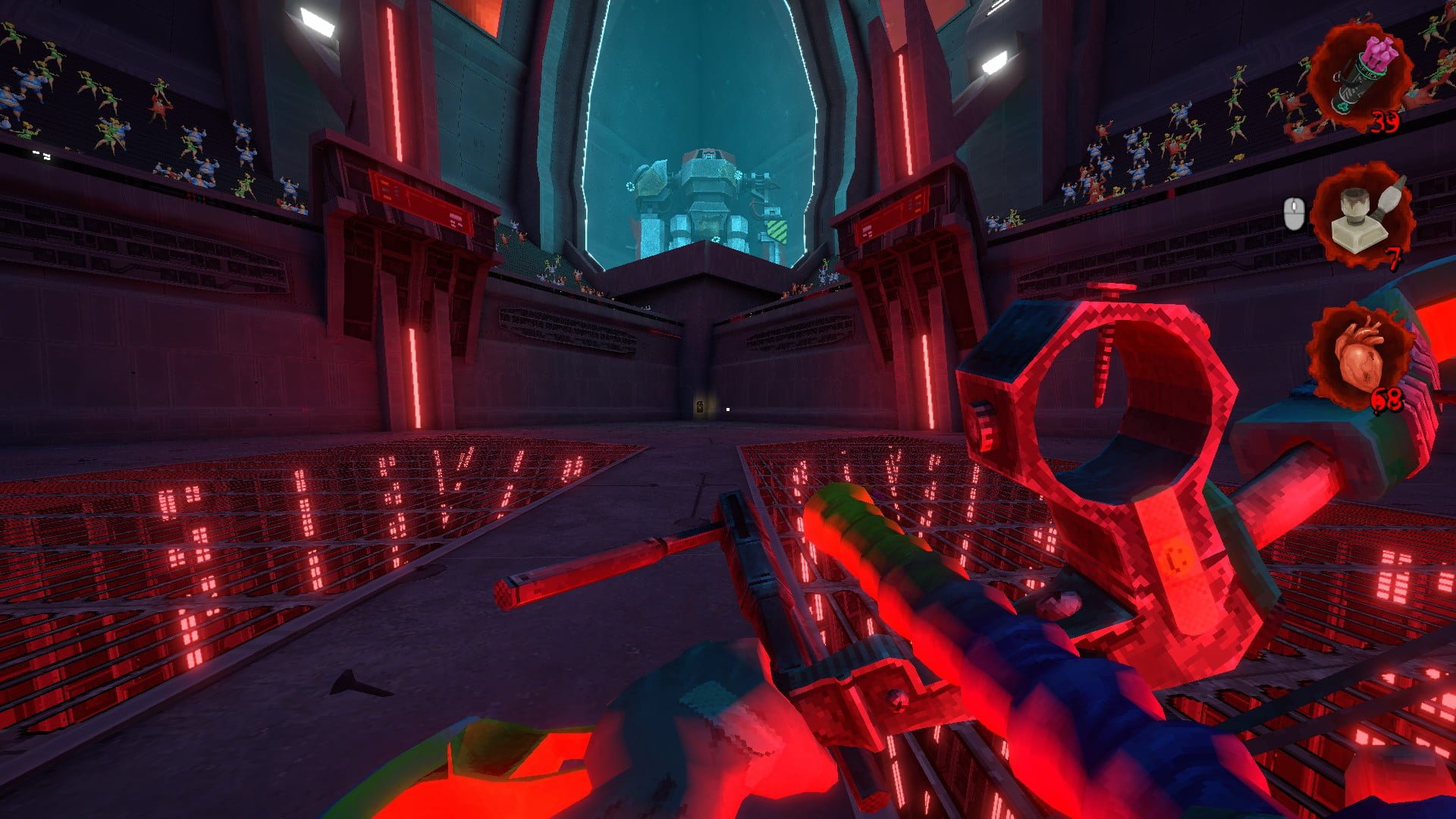 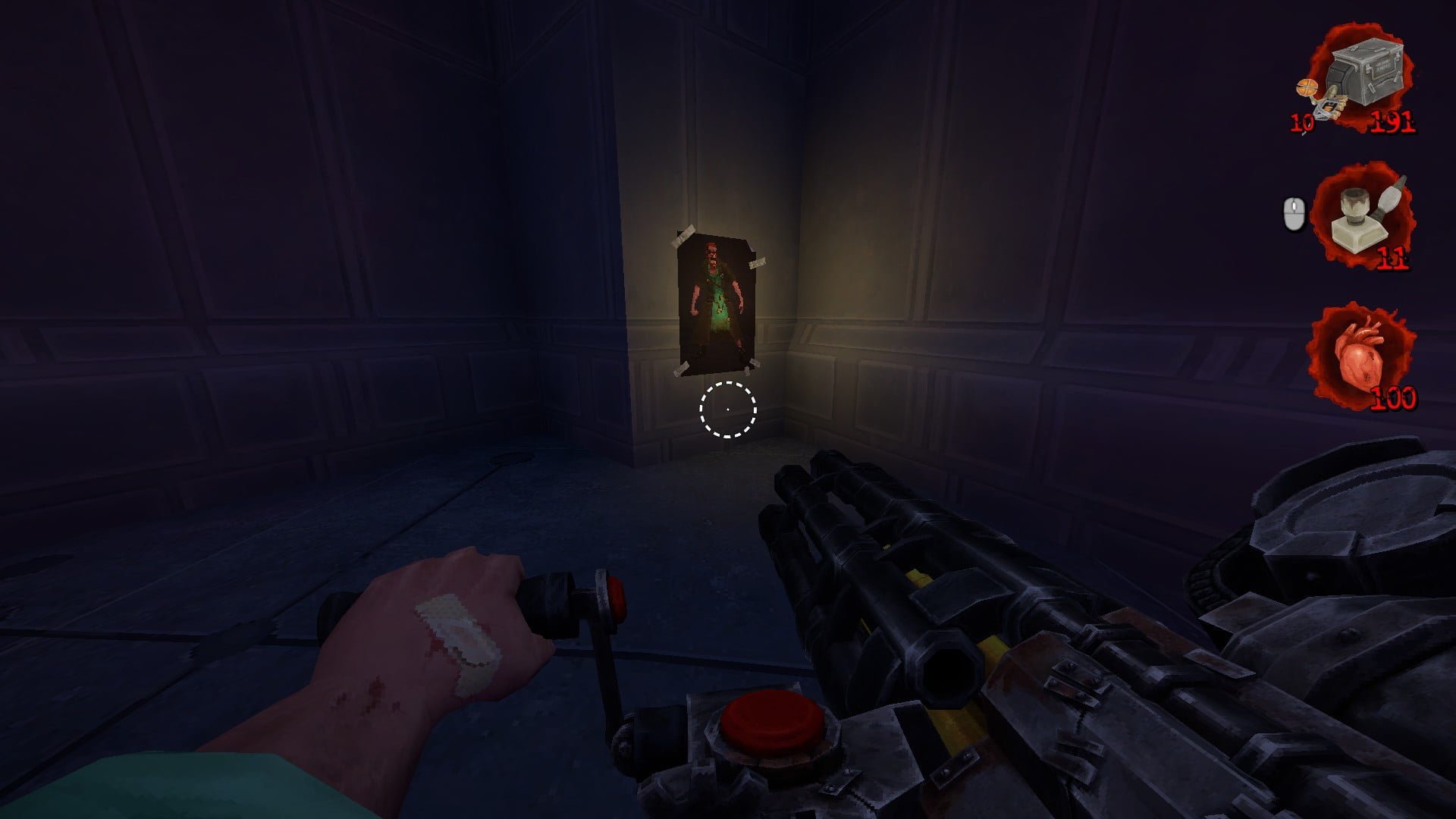 However, I recommend you get this immediately after beating the first phase.
You can still get it after you beat the second phase, but it’s better to get it before you forget.

Surprise! Turns out Leon Dusk is The Other DUDE who’s been harassing you in your dreams.
You’ll be fighting him personally in the first phase of the boss fight. 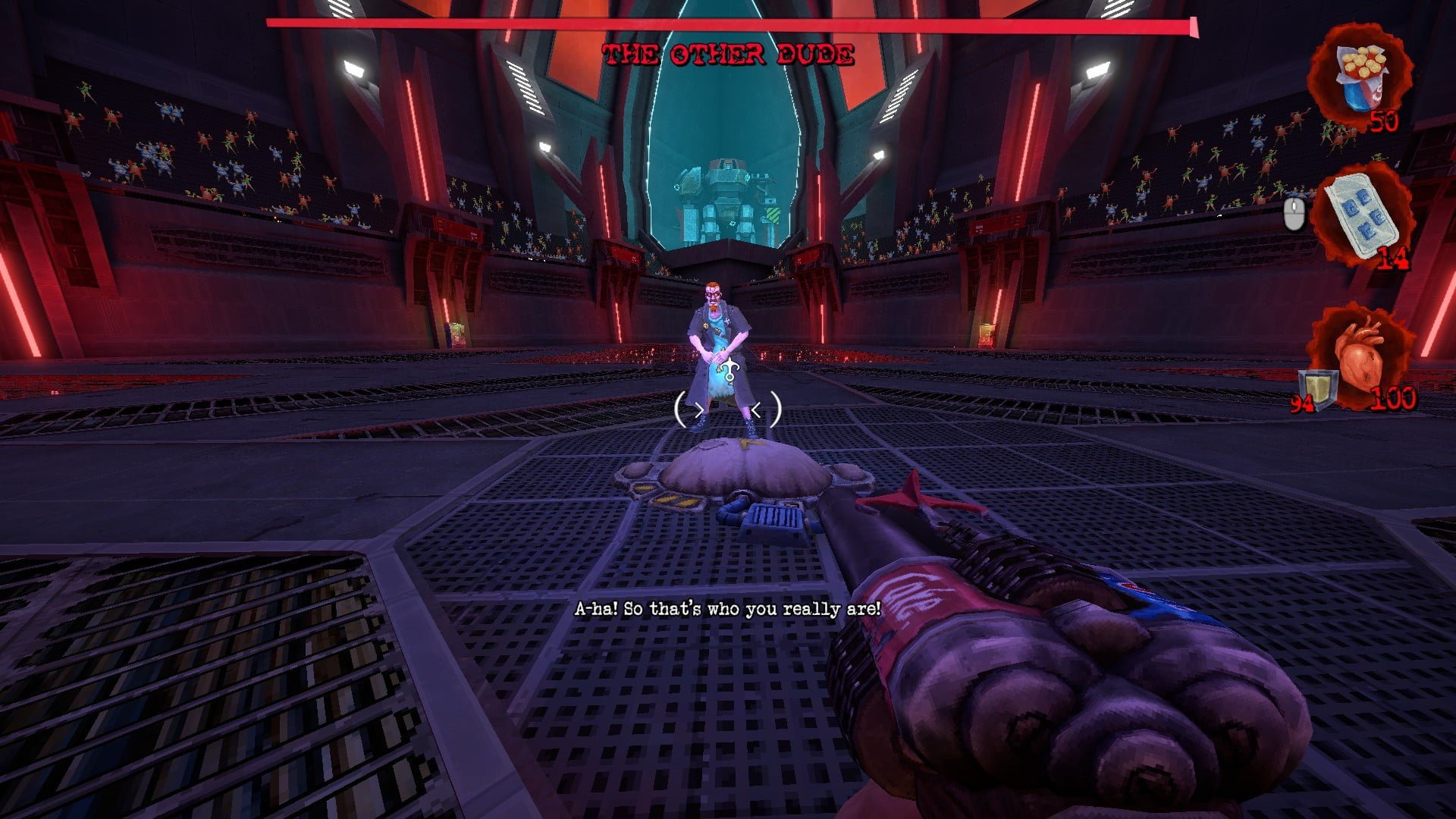 You’ll notice that he uses the same mechanics and weapons as The Postal Dude.

The Other Dude’s Attacks: 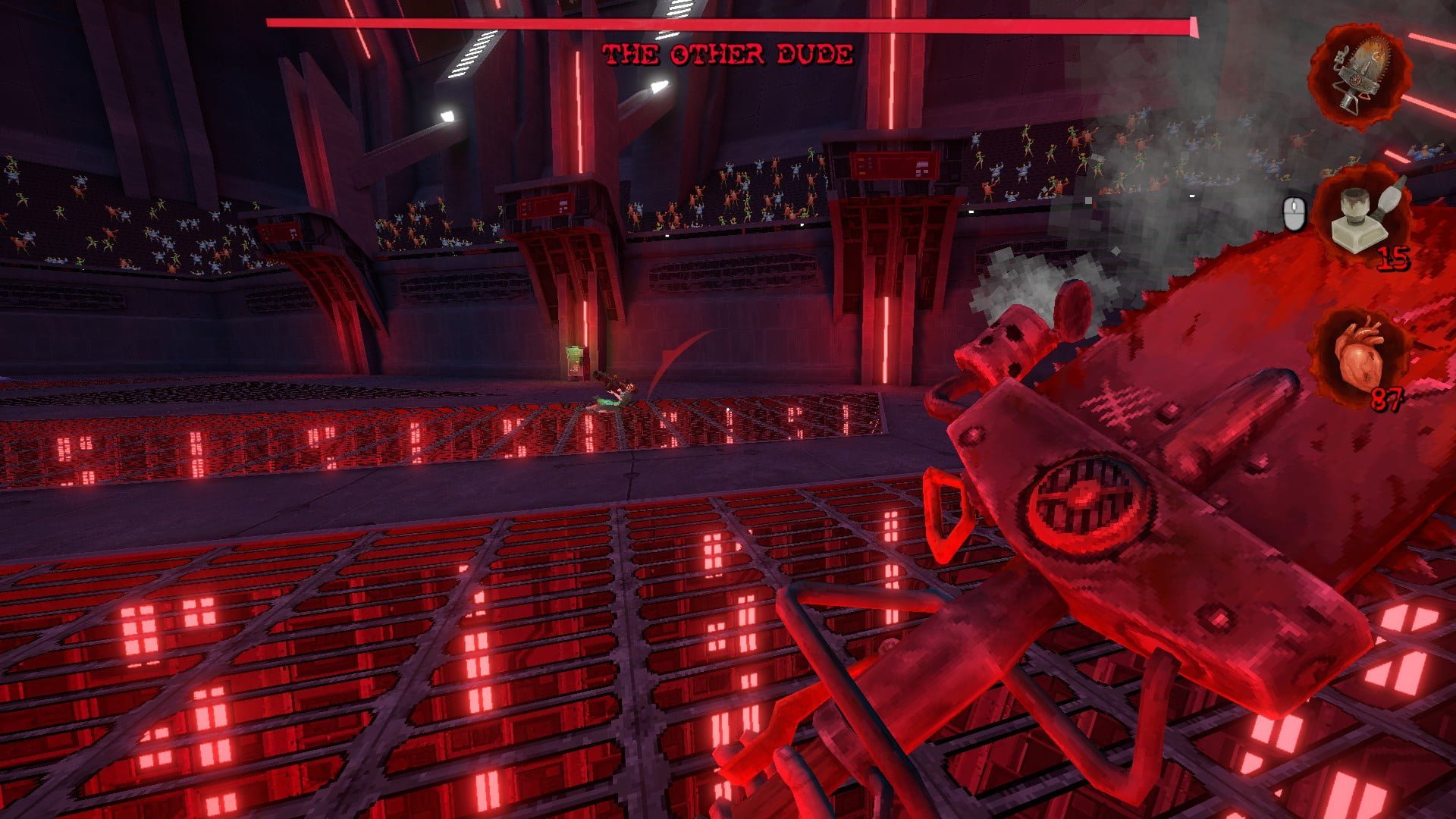 Throughout the fight, The Other Dude will keep sliding and jumping.
This makes him an exceptionally tricky enemy to hit. 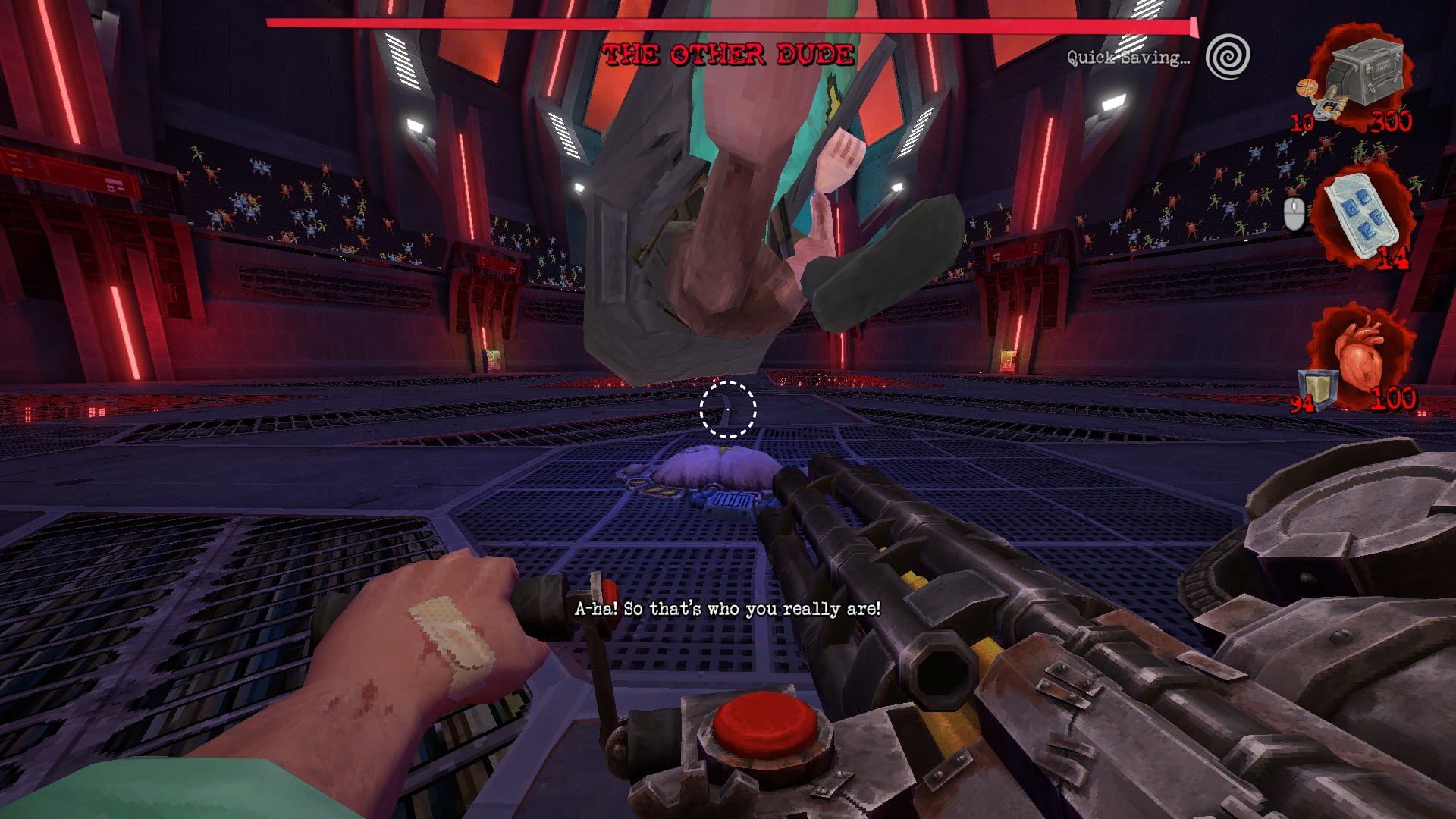 He will also kick you if you get too close to him. Sorry for the picture. 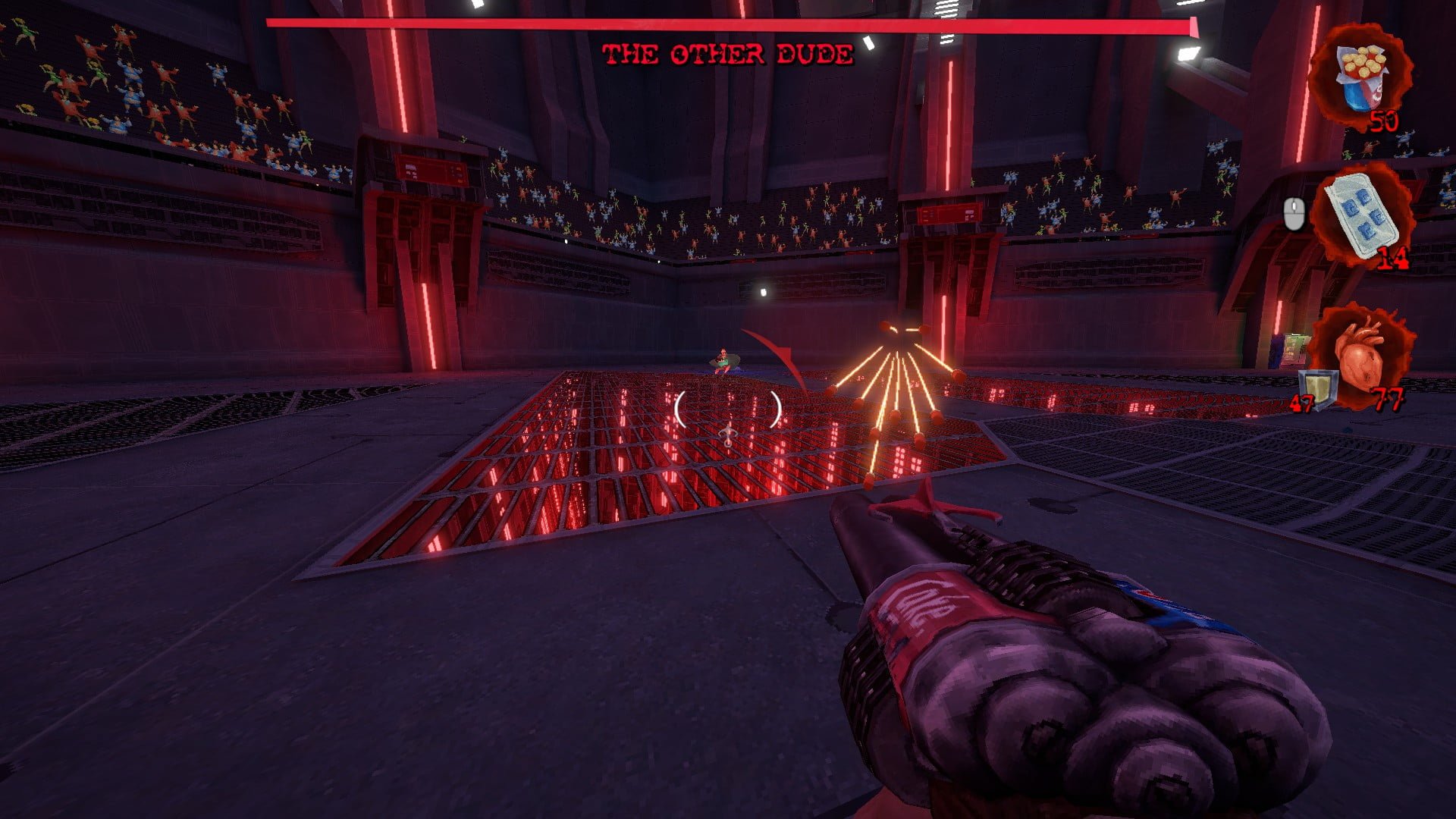 This attack is very deadly if you stand too close to him or if you stand in front of all those pellets.
The shotgun fires deceptively fast. It doesn’t help that he can slide aggressively towards you and pull off a close shot on you. 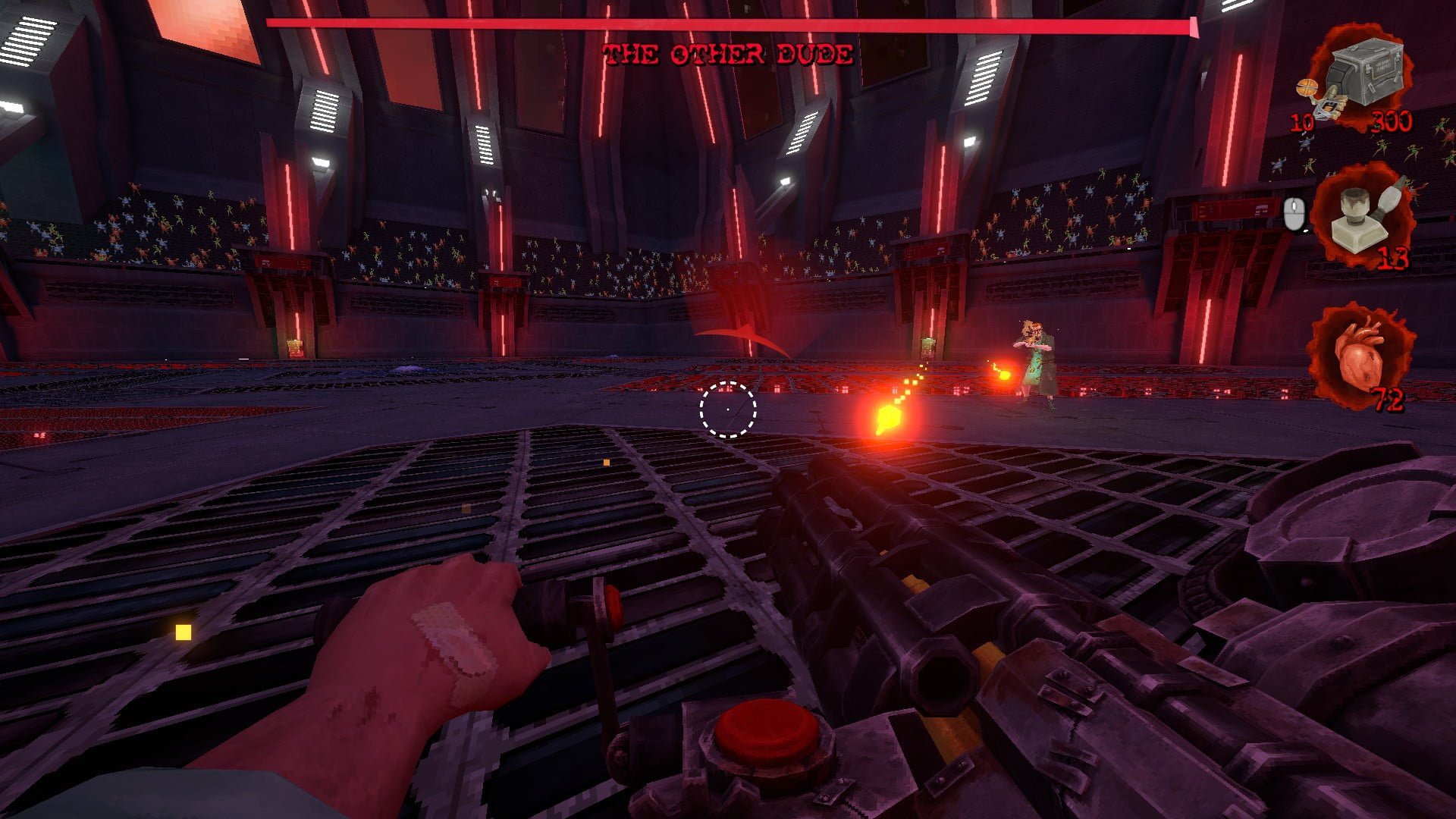 Occasionally, The Other Dude will pull out a red machine gun. While the bullets don’t deal a lot of damage themselves, they are fast and very accurate. He will often use it in small bursts after hitting you hard, or just spray it to whittle your health down. 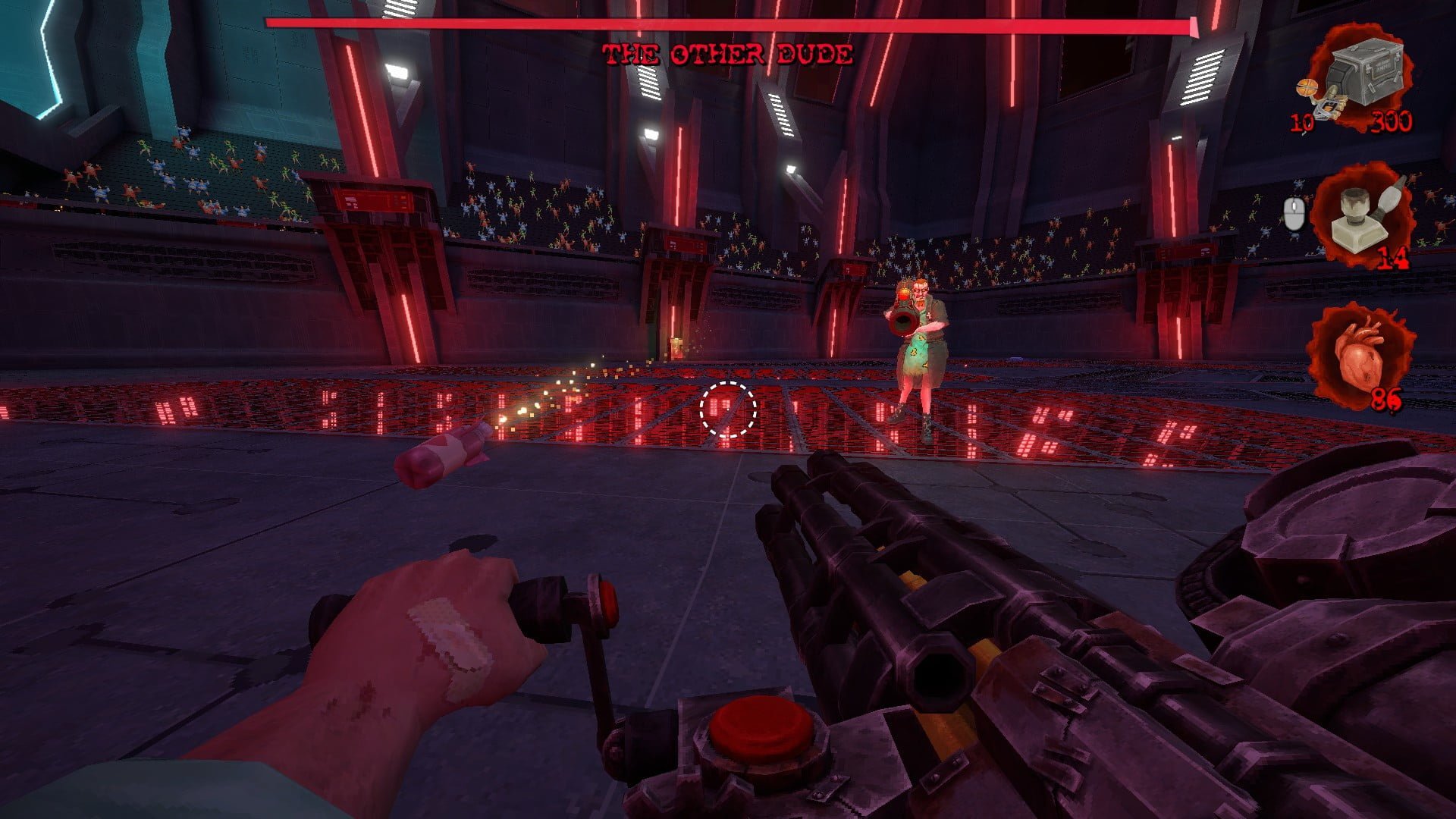 The Other Dude will pull out a rocket launcher and fire rockets at you.
This attack isn’t dangerous if he uses it from afar, the real danger is when he decides to use it pointblank. So far from what I can tell, he doesn’t suffer from self-inflicted damage.

If you want to skip this phase almost entirely, remember that Quick Pillz you picked up earlier in the prep room?

You’ll want to use it as soon as The Other Dude jumps in as shown in this picture. 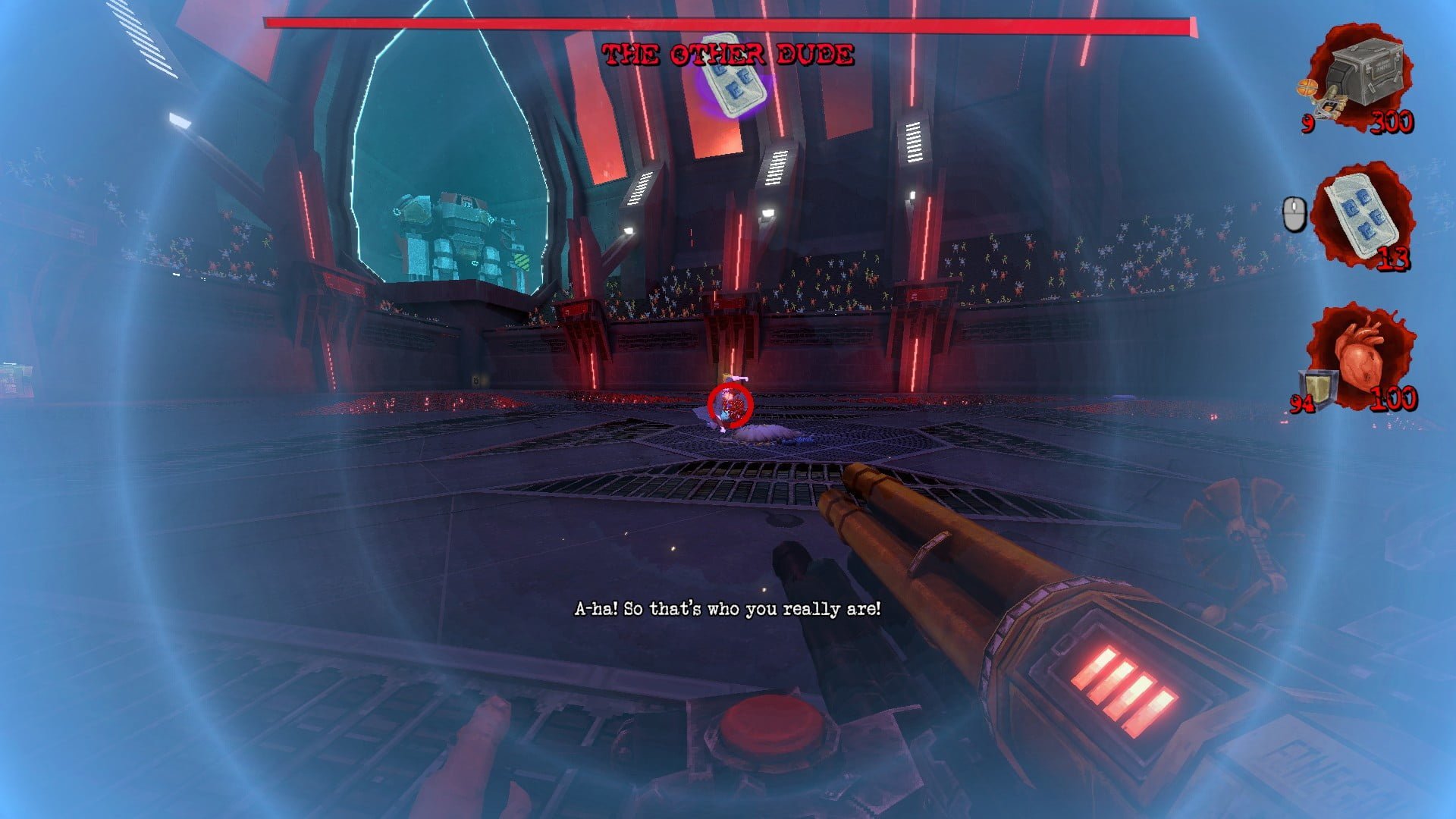 This is your prime opportunity to spam as much bullets into him as you want.
I would personally recommend walking close to him and unleashing a couple pointblank shotgun blasts in his face. This will take off several chunks of his health bar.
You can use any other weapon as well, just make the most of the Quick Pillz powerup as you can.

FYI, you CANNOT use the Double Akimbo powerup while you have the Quick Pillz activated.
Otherwise it will cancel out the slowdown effect and you’ll have a relatively harder time hitting him.

I highly recommend you quicksave at this point because this second phase is very deadly.
So unless you want to enjoy fighting phase 1 again, you should get that third poster and save.
The Other Dude will jump into the Teslaborgelion suit that has been in the background of the arena.
While this boss is much larger and relatively slow compared to phase 1, it does not mean that it’ll be any easier at all. 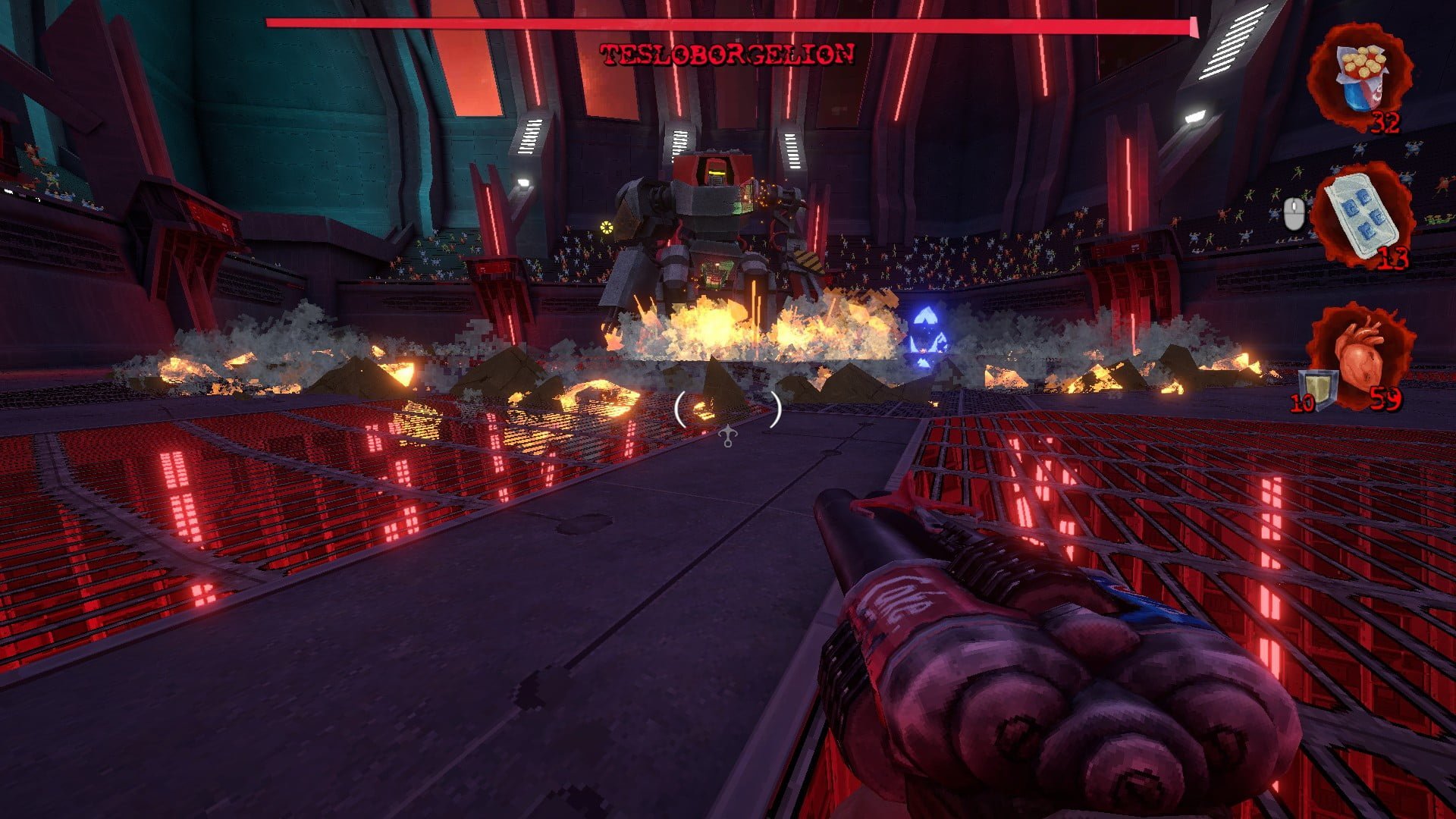 Anytime the robot jumps or starts to stomp, it’ll emit a shockwave that’ll traverse through the arena.
You can simply jump over these waves to avoid damage. Just be aware that it can stomp right after jumping to create multiple waves. 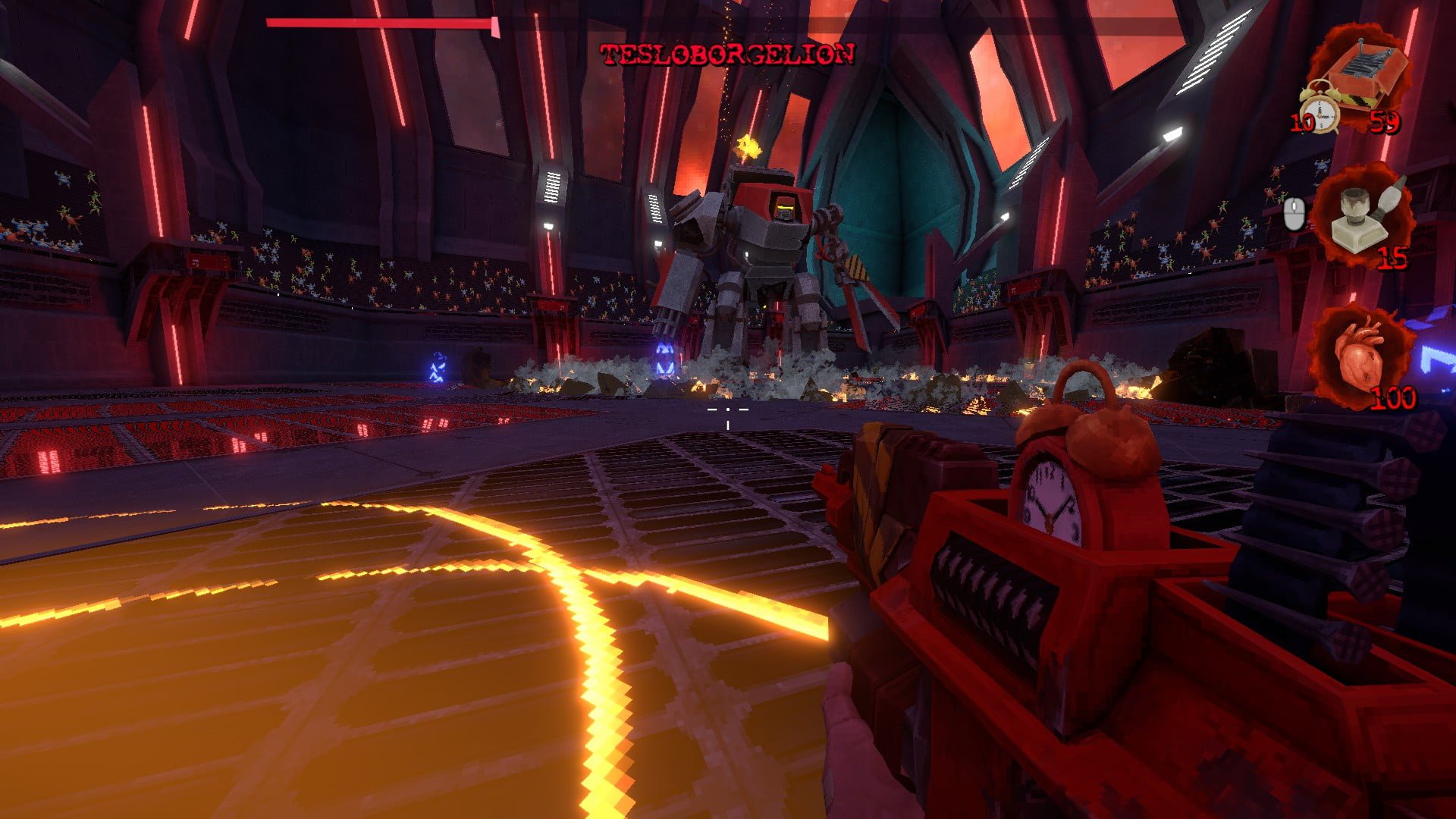 Sometimes if you’re too far away from the boss, it will start launching rockets up in the air.
The rockets will land in the area indicated by the yellow circles on the ground, usually around your general location. Just move around these circles and you should be good. 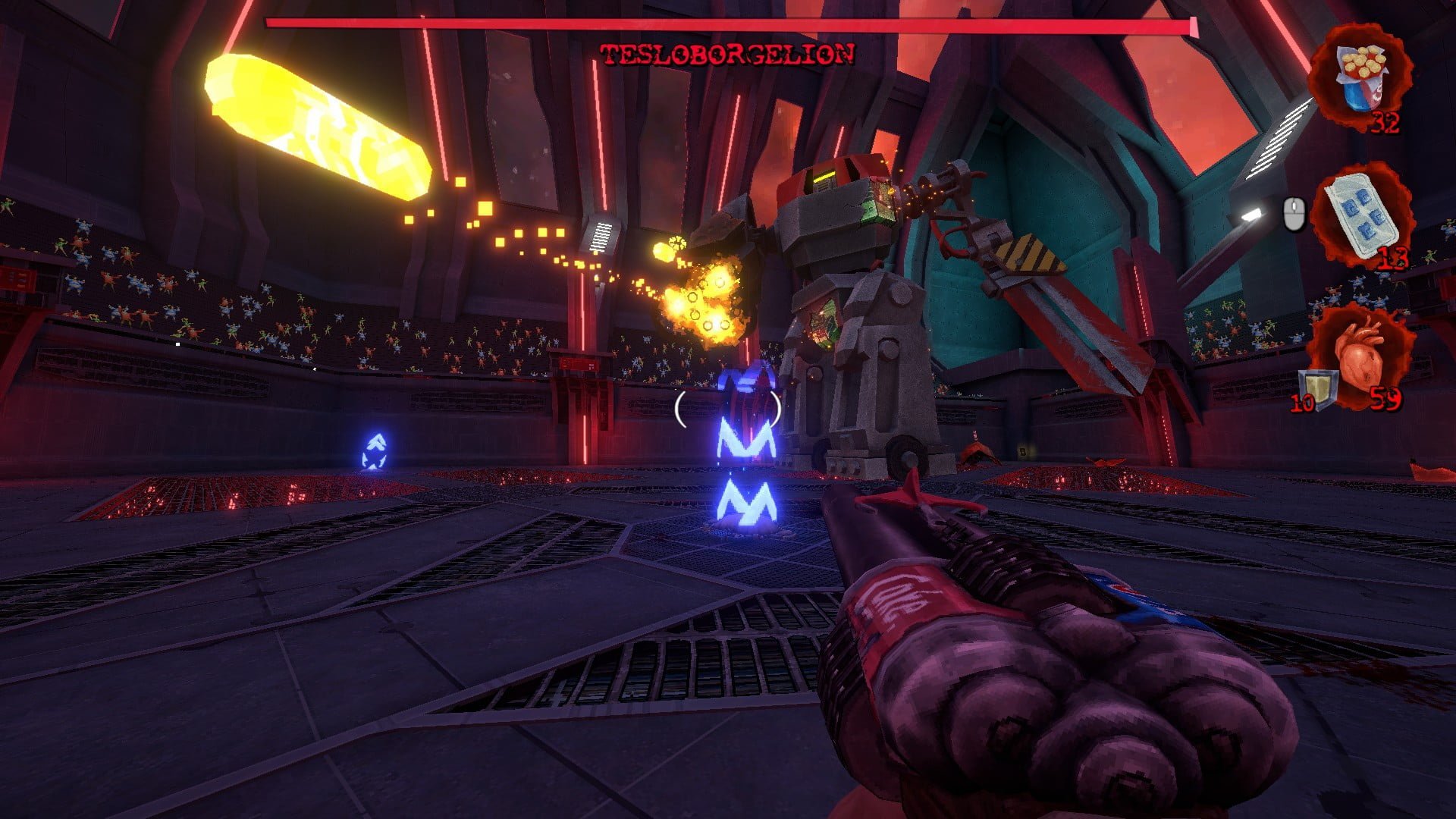 The boss will rev up the gatling gun on its right arm before unleashing a bulletstorm of death on you.
This attack will track you and will absolutely kill you fast if a few bullets catch up to you.
It’s a dangerous attack that can end your run quick, so make sure to keep sliding to the side to outrun the bullets. 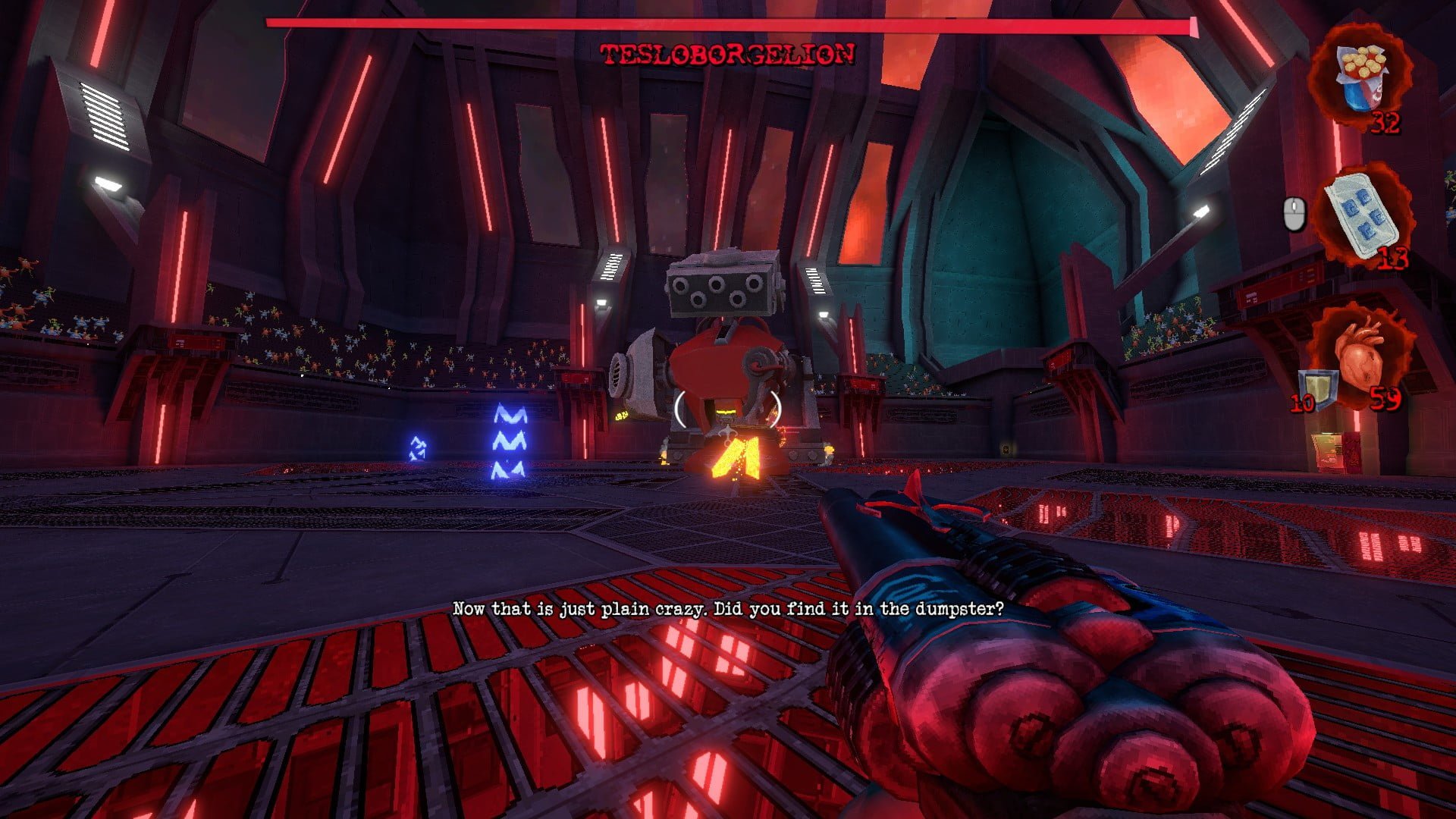 The boss will stand straight up for a few seconds before crouching down.
It will slide towards you while trying to cut you with its scissor claw.
In my personal opinion, this is its most BS attack. If you’re too close to the robot, it can instantly attack you with this move. Not only that but it hits incredibly hard for a nearly unavoidable move. 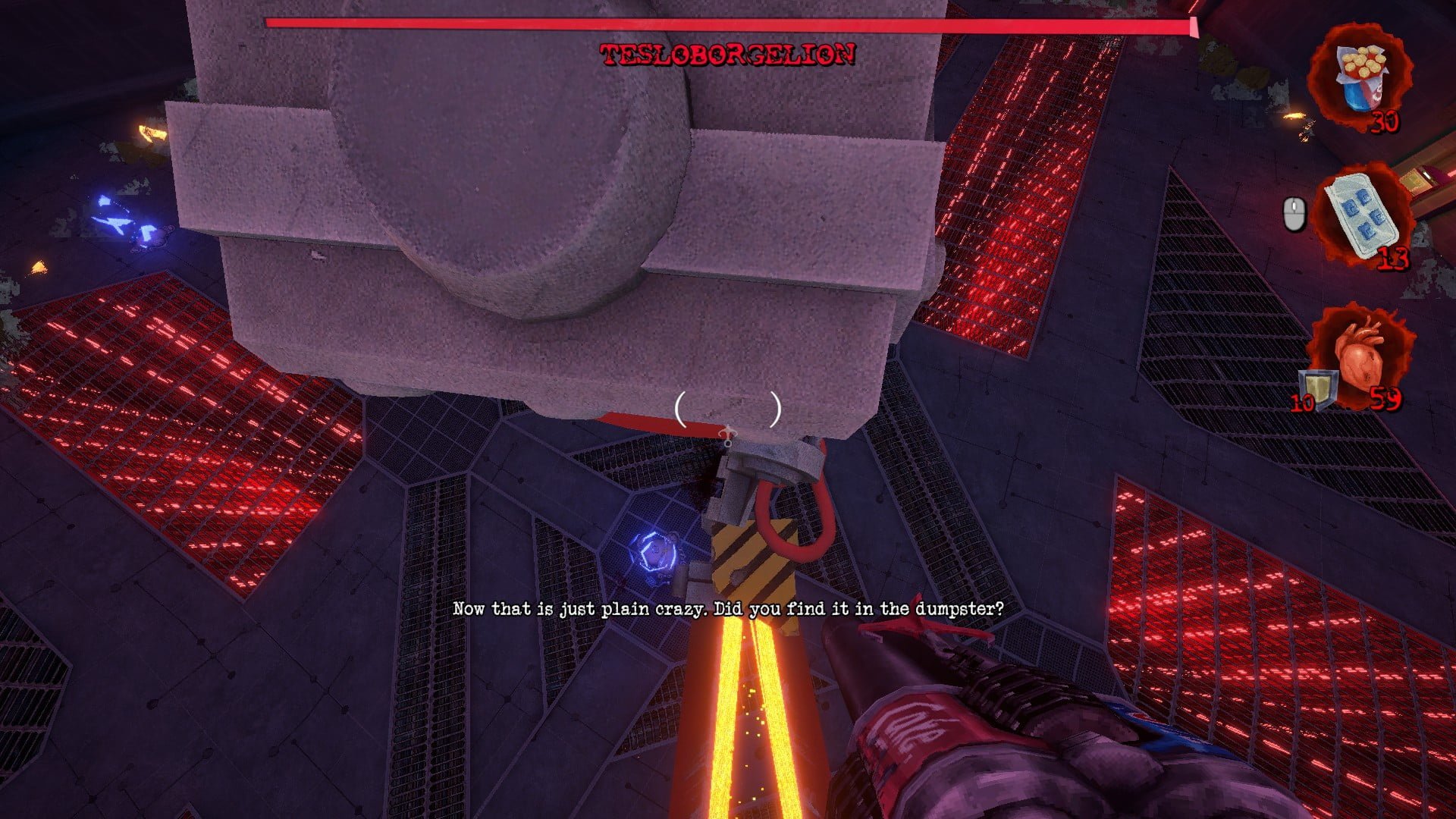 The one way I found that you can somehow reliably avoid this attack is by using the three launchpads in the center of the arena to jump over the scissor slide attack. So keep your eye on the boss when it telegraphs this attack otherwise you’ll take significant damage.

Written by AZRA3L The Eternal