A complete walkthrough of S.I.P., Dude with all secrets and poster unlocks. (+boss guide)

As soon as you beat the boss, you will be dropped down onto its spawn room.
There will be a bed waiting for you, but do not interact with it just yet.
The two posters will be on the walls surrounding the bed. 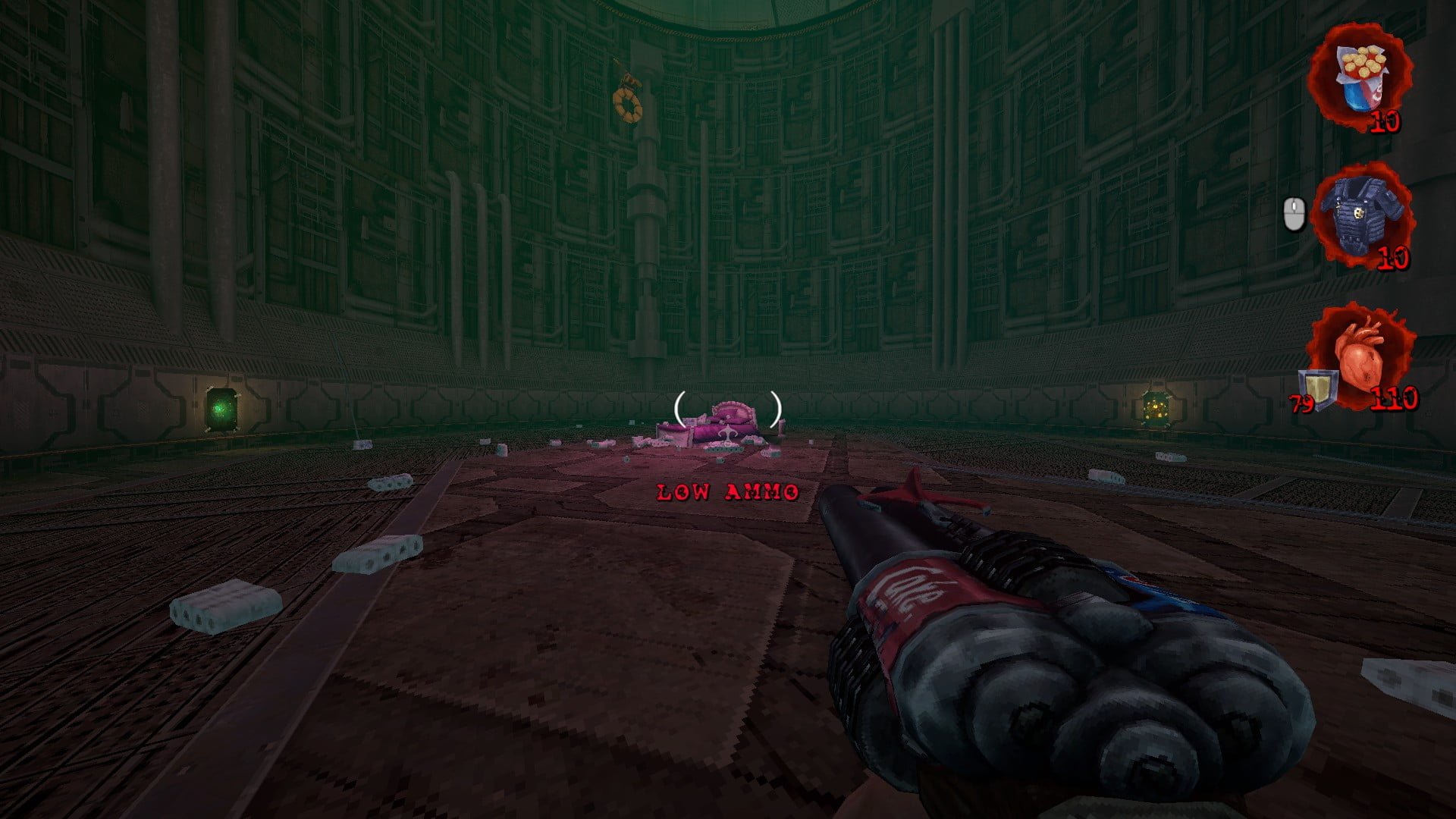 You will start off in this area where you see an ominous red screen on the other side.
Walk around to that area to see two ammo refill machines, portal armor, and a health pipe. 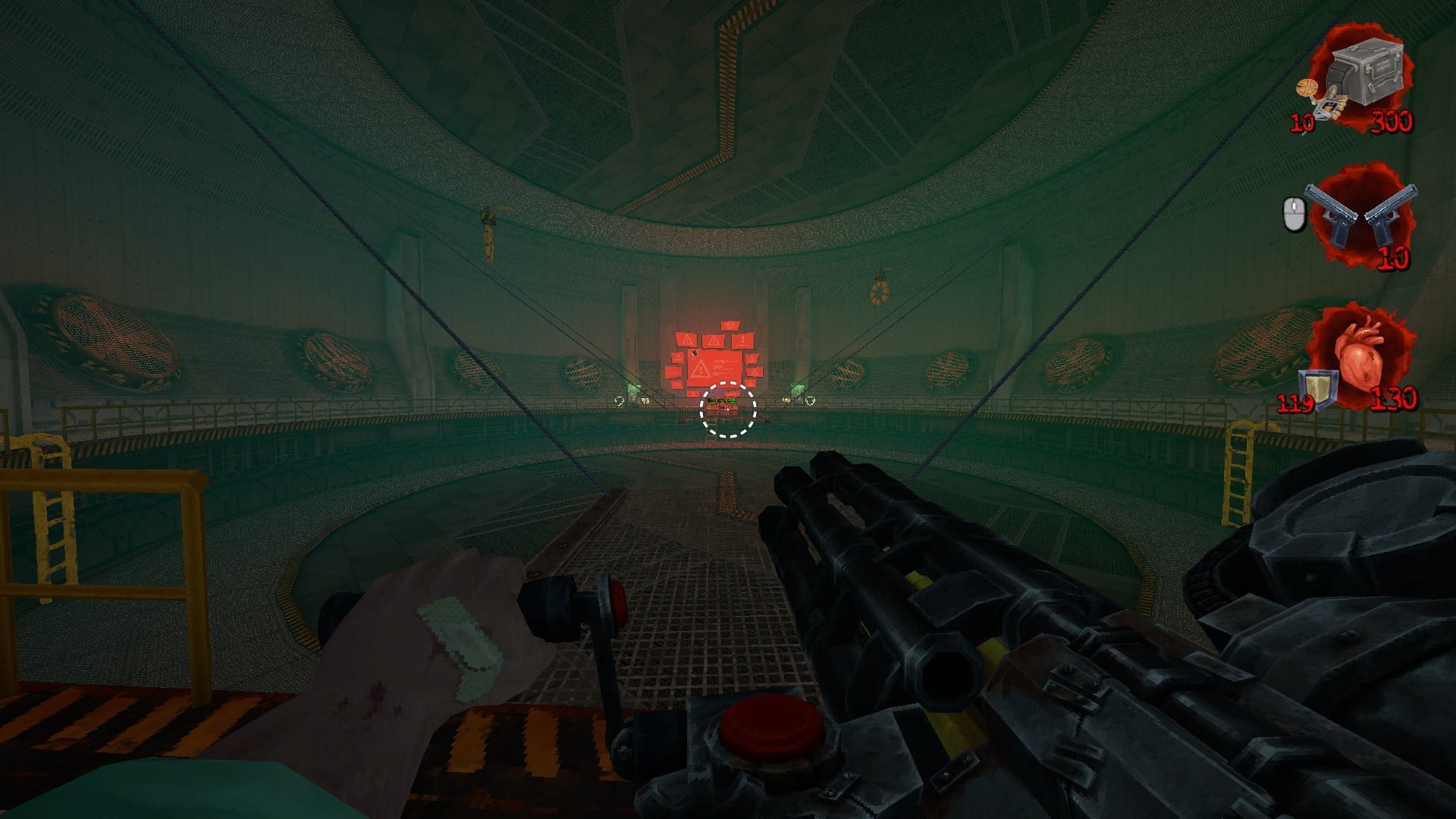 Right underneath the red screen is a pink level.
Pulling this will activate the air vents that will levitate you as well as the numerous grapple points. 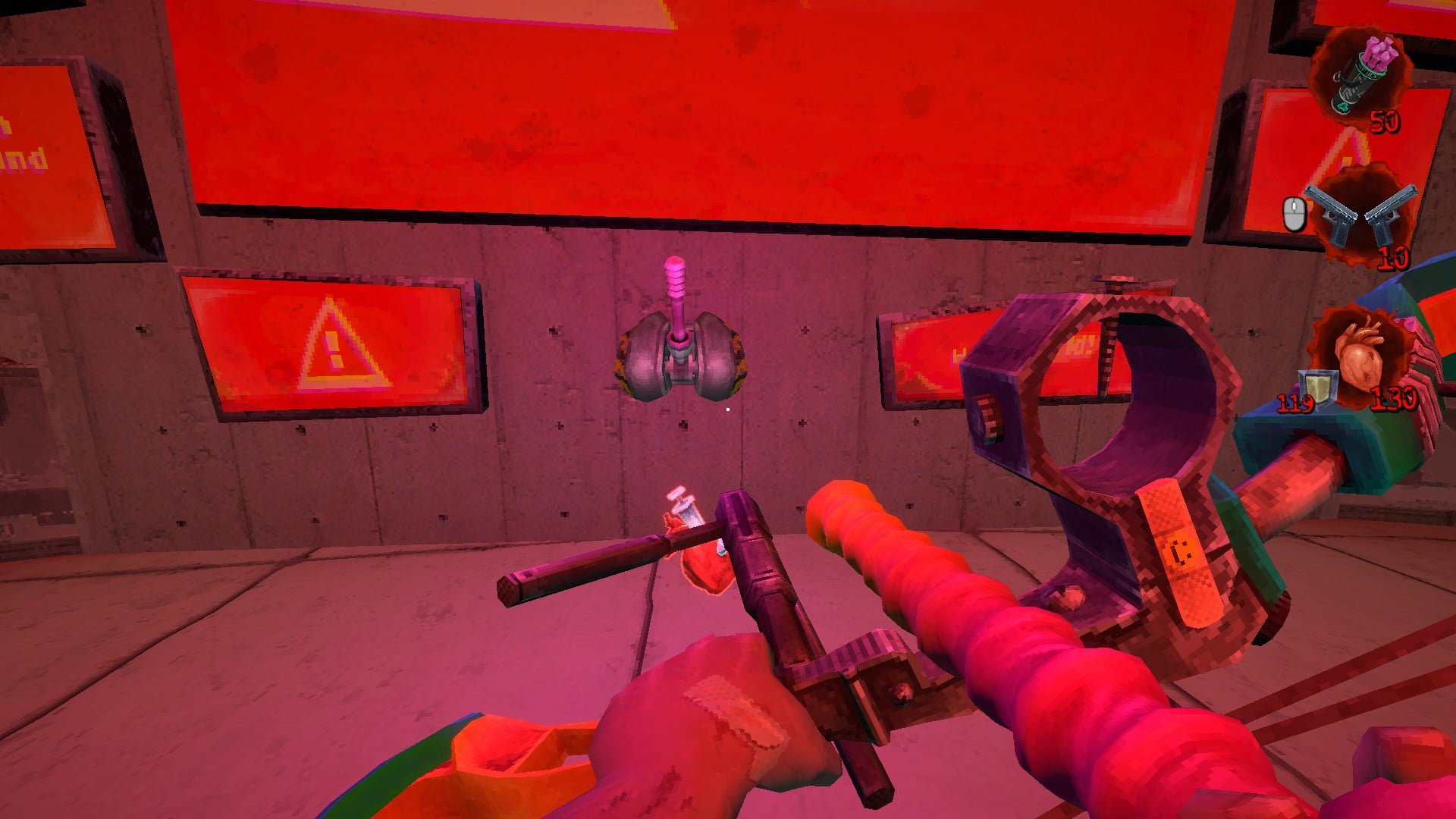 Your next objective is to go into the center of the room using either the grapple points or float over there. 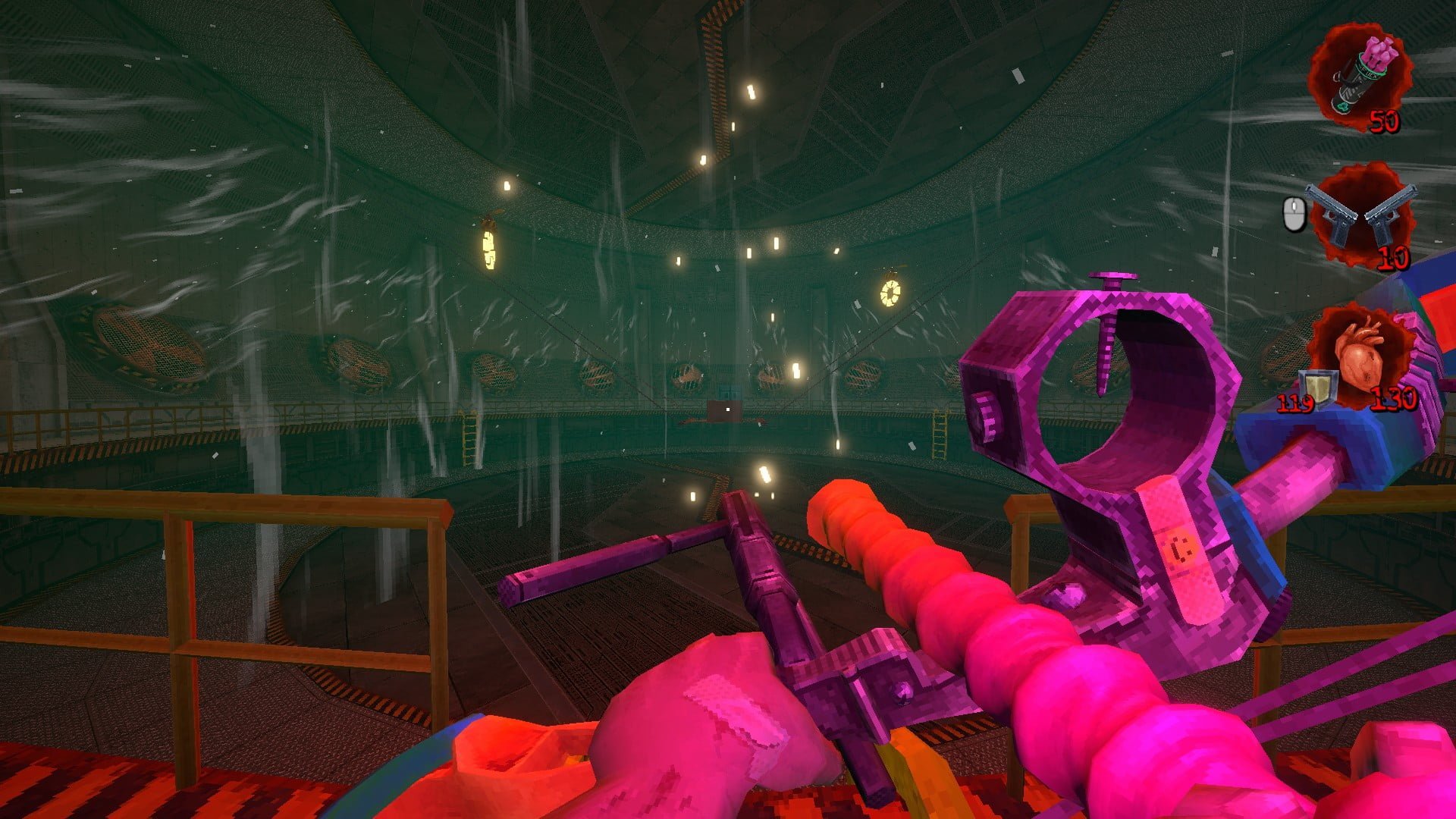 There will be a command console with a glowing button. Be aware that pressing this button will initiate the boss fight. 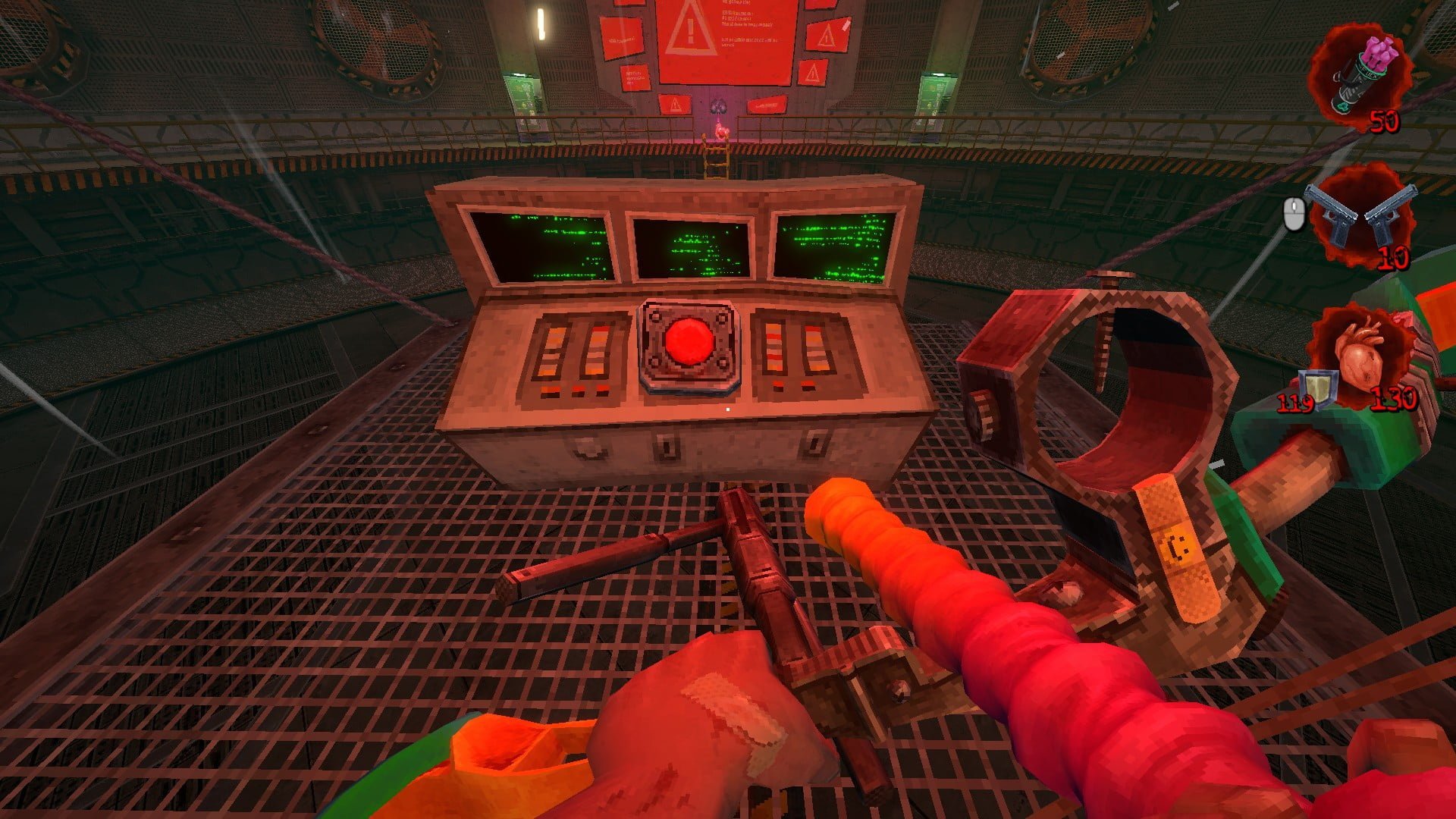 How The Boss Fight Usually Goes

Well curiosity got the best of you when you decided to press the red button.
Now an absolutely hideous abomination will appear underneath your feet.
This is probably the best time for you to start ascending because as the boss rises,
there will be a pool of sickly water that rises too and will drain your health fast if you stay in it too long. 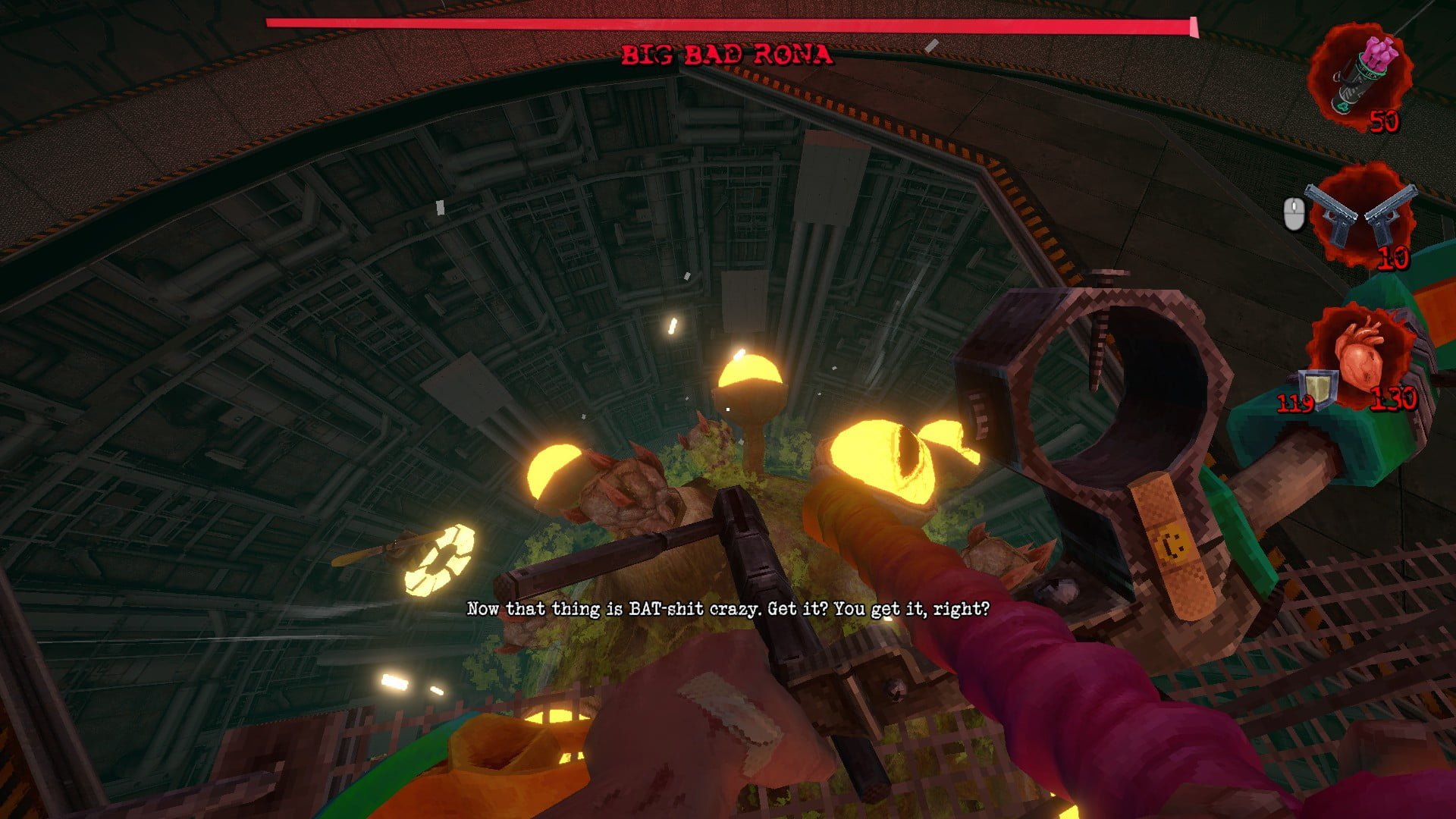 Eventually you will see this targets throughout the fight.
If you choose to shoot these, a trap will be activated that vaccinates the creature.
This is effectively hold the creature in place while exposing its weak eyes for critical damage.

There are some attacks that this boss will do that you should keep in mind: 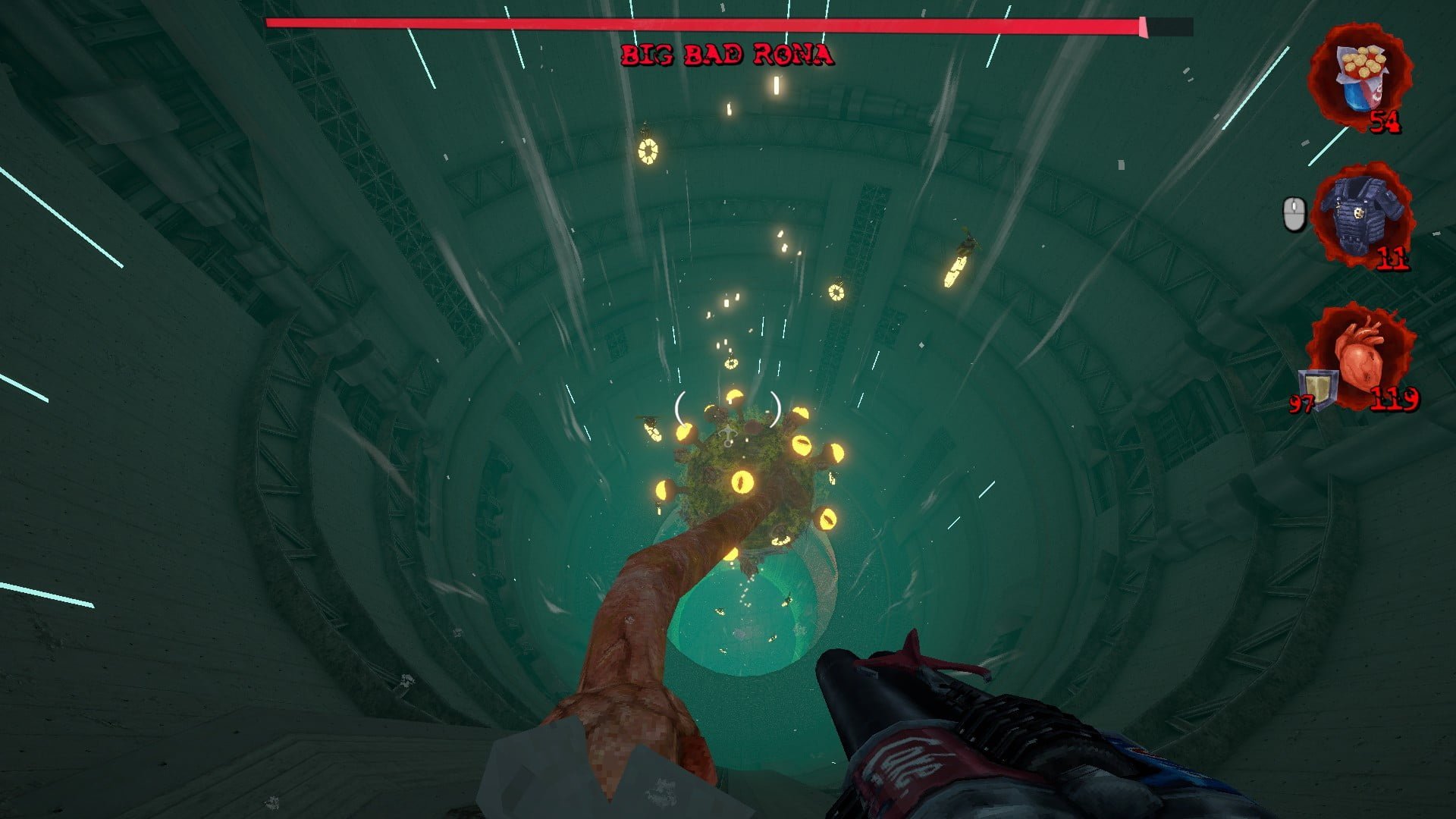 The boss will have some protruding barbs within its body. They will try to strike you with pretty close accuracy. These attacks do a bit of damage and have considerable knockback, so keep on the move. 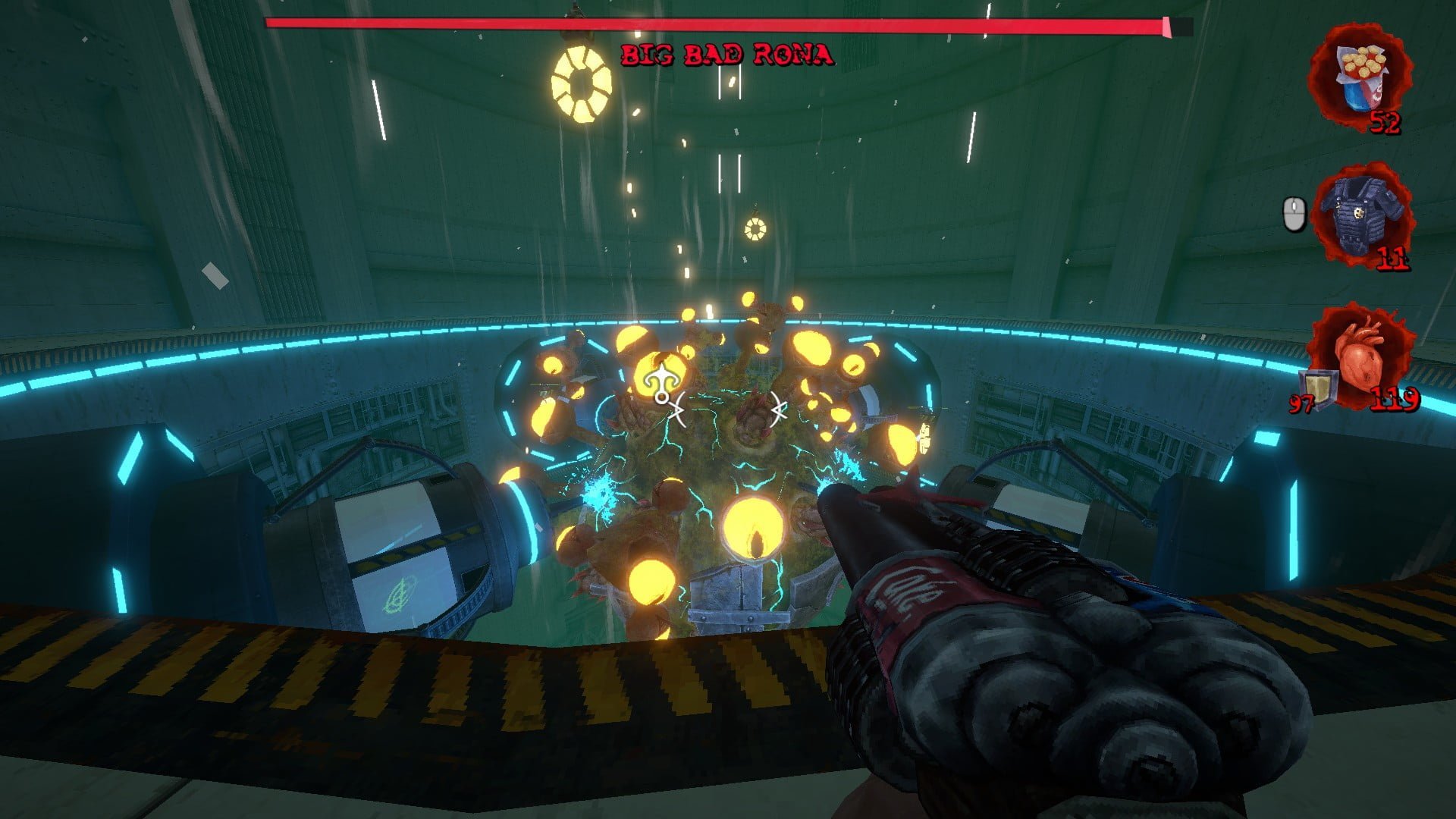 This seems to only happen when the boss gets trapped by the vaccine switches that you activated.
A few Lil’ Ronnies will spawn while the boss is stuck. Watch out for these guys because they can deal a lot of damage. They will follow you then explode itself to leave a lingering gas that drains your health. Just remember to aim for the eyes to dispose of them fast.

This one isn’t exactly an attack from the boss itself, but it is something that you need to try to stay out.
If you don’t keep up with the boss, you will eventually be swallowed by this pool. it’s not an instant death, but it will quickly drain your health and armor if you don’t get out of it.
So try to keep your Super Hooker Shotgun on you to grapple onto the boss and grapple rings to stay on pace.

What You Can Do

First of all, you pretty much need to use the Super Hooker Shotgun as there are multiple grapple rings throughout the boss fight that you must use to stay with the boss. 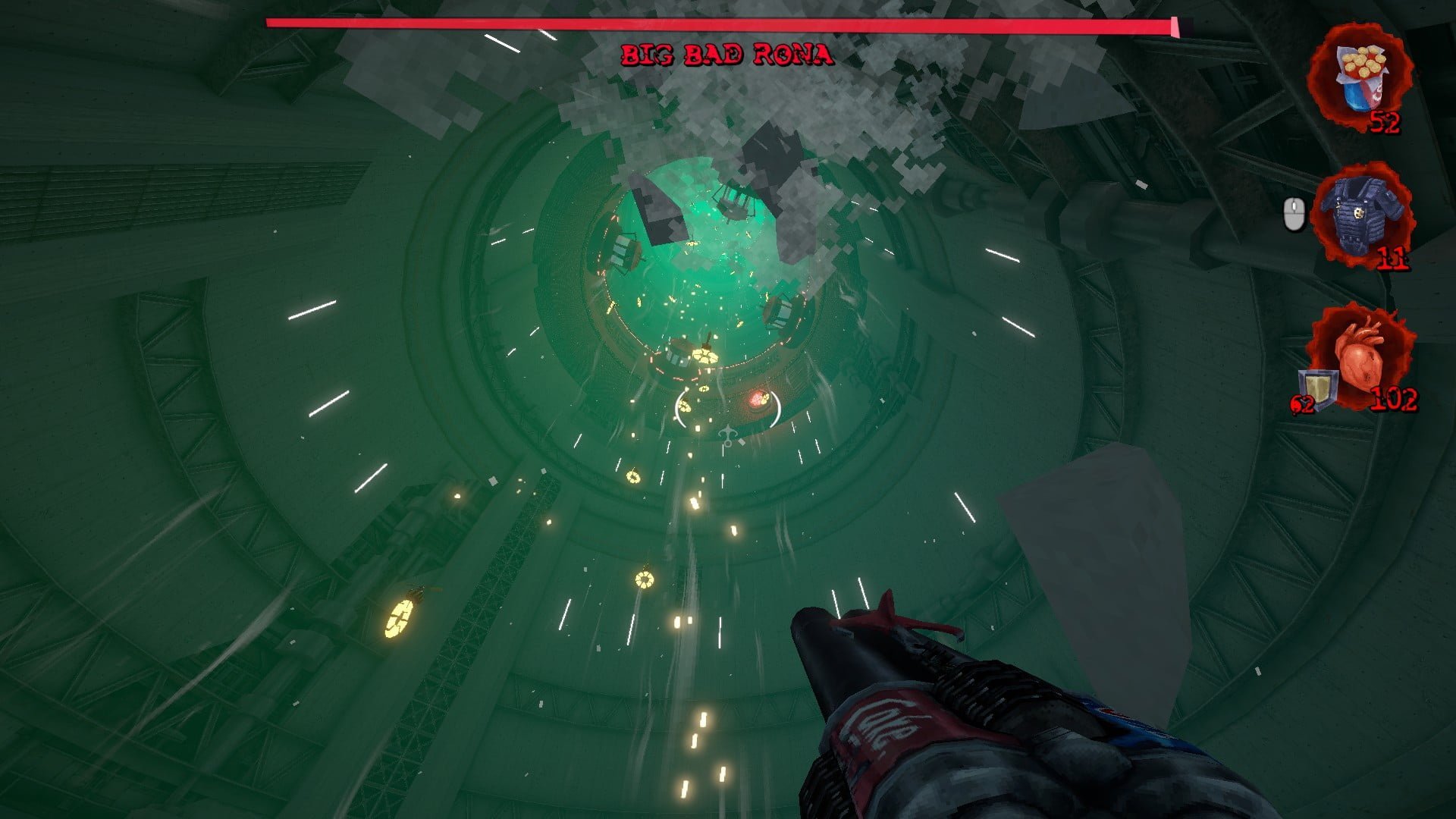 Perhaps the most important thing to know is: SHOOT THE EYES
Shooting the eyes will deal much more damage than simply shooting the main body, but if an eye takes damage, it will retreat back into the body. So make sure to use burst damage on the eyes or any automatic weapons on the body itself. 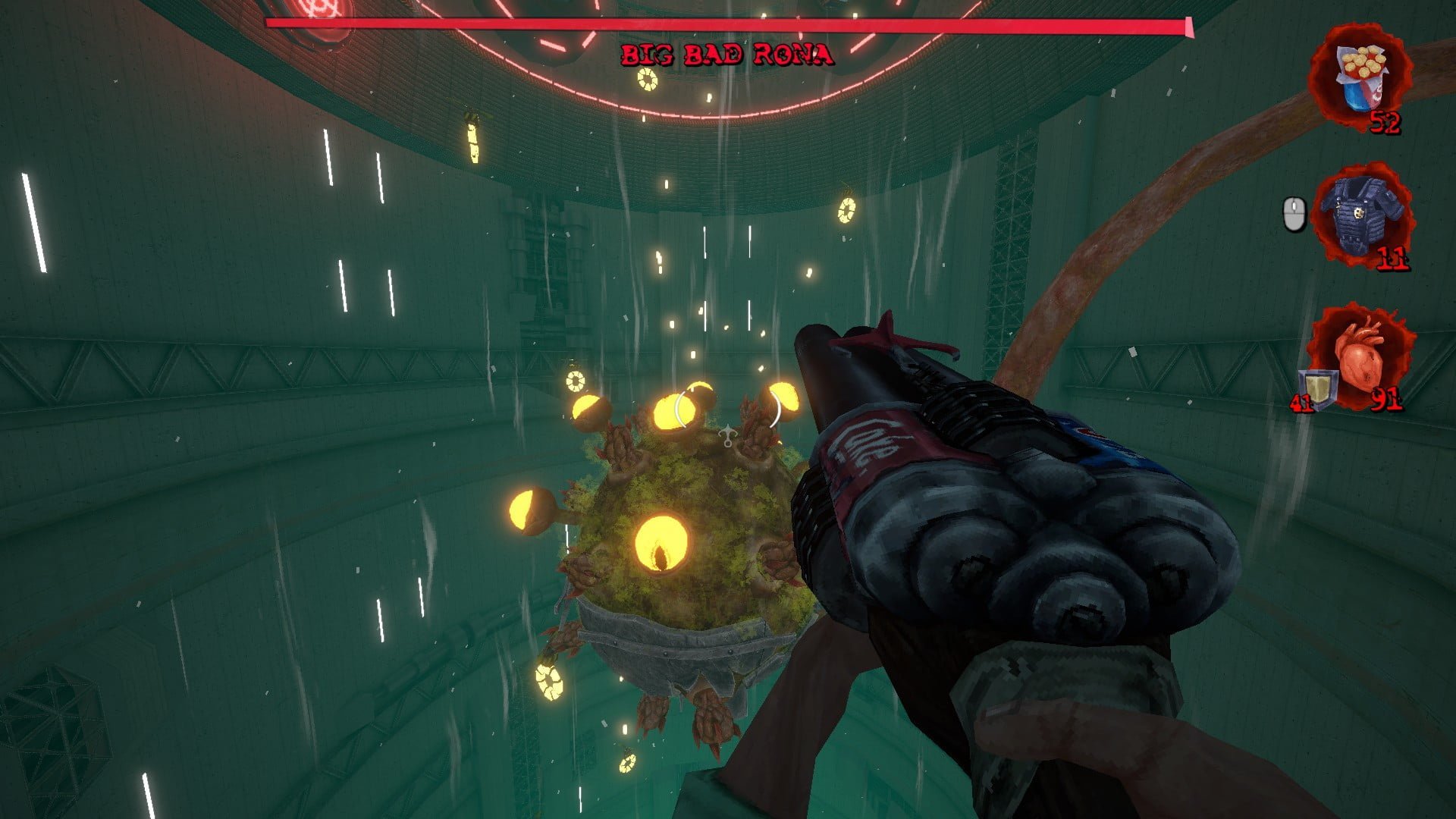 Another key feature you can use to your advantage is to keep a lookout for these targets.
There is an achievement tied to not using these targets, but if you want to kill the boss ASAP then use these. 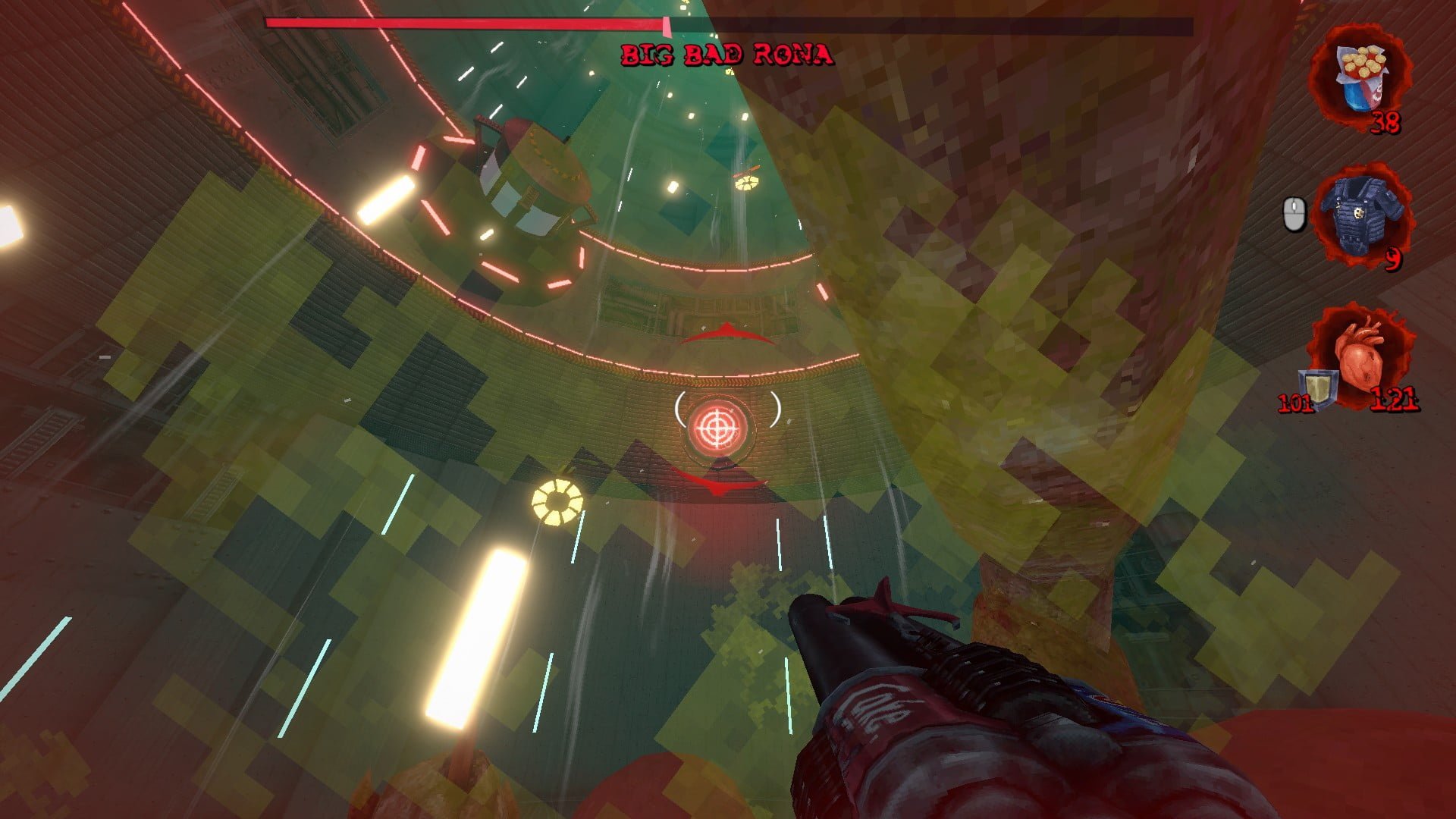 If you shoot it in time then as soon as the boss passes through, it will be stabbed with vaccines that cause it to expose its own eyes and stand still. Use this time to unload your guns onto the eyes! 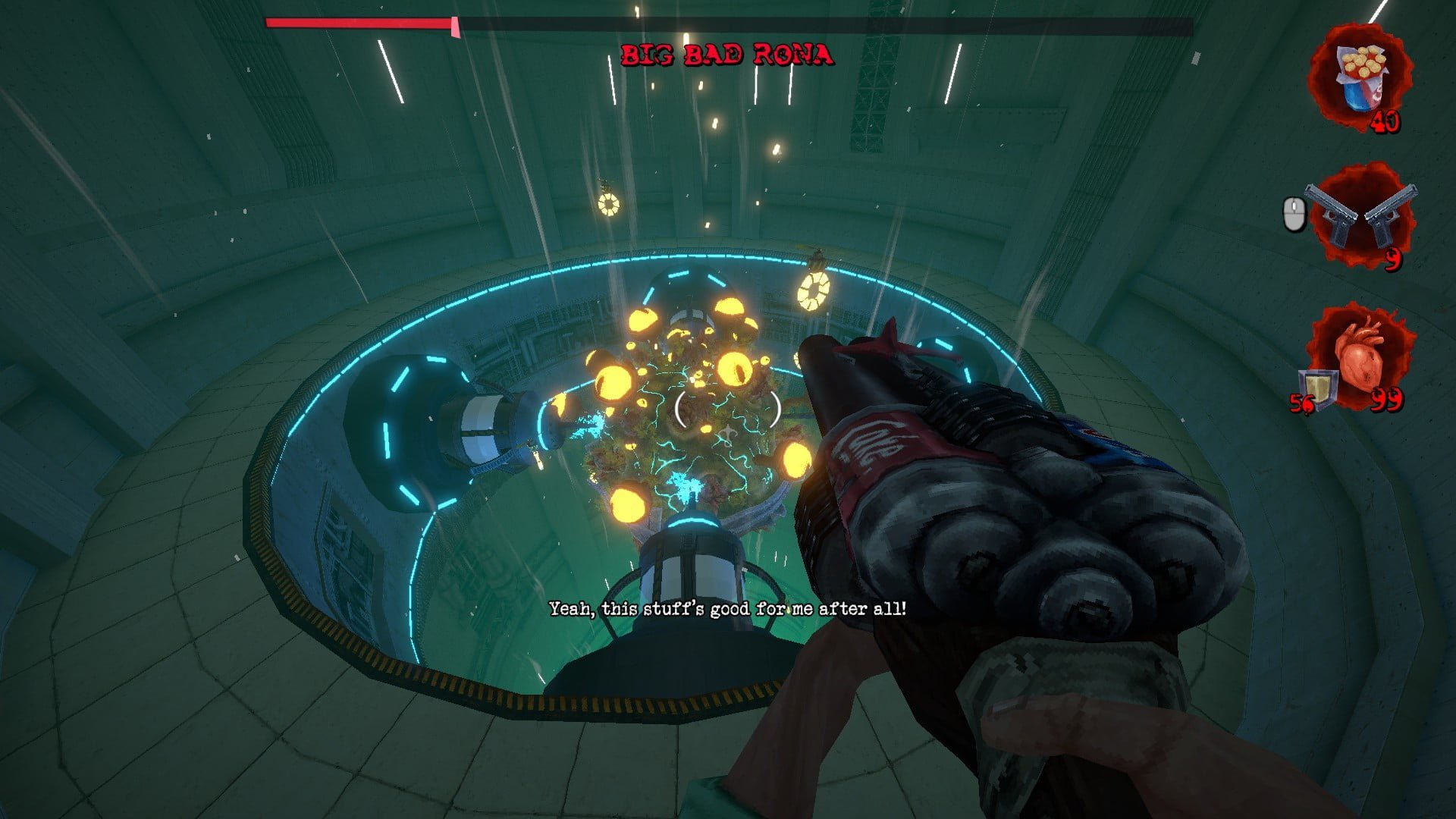 How to Get a “Speedrun”

There are those of you who want to get the speedrun achievement that requires you to complete a level under its speedrun threshold.

Botul recommends doing it on this level since all you really need to do is rush down the boss’s health then drop down fast to the bed. You wouldn’t need to worry about solving puzzles nor any secrets.

Well, I can safely say that you can still easily accomplish this without the power up. All you really need is the Super Hooker Shotgun.

Simply walk on top of the boss.
Walk up close and personal to any of the eyes.
Shoot it pointblank to deal a big chunk of health.
If you fall off or want to shoot the other eyes then grapple onto them to hit them pointblank again.

This strategy works even better if you manage to activate the first vaccine switch to reopen some weak spots.

Here’s a lazy video showing you that it “just works” in the words of Todd Howard.

Written by AZRA3L The Eternal