A Rage Unleashed is one of the main missions available in Red Dead Redemption 2. Eagle Flies and his gang decide to rob a military ship that carries horses stolen from the reservation. 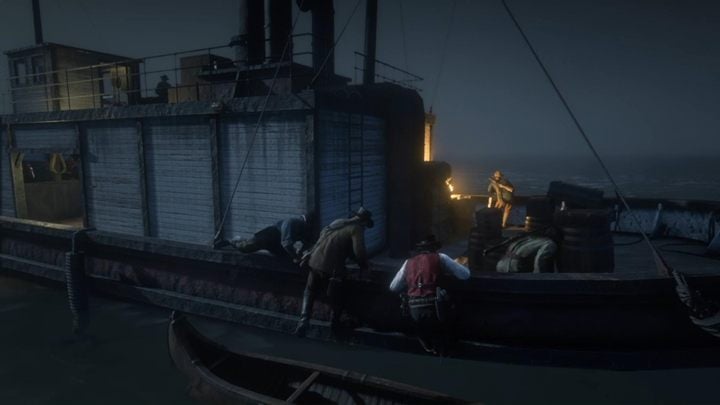 Make sure to bring Weapons to silently kill on this mission.

How to get a gold medal in A Rage Unleashed?

To start this RDR2 mission, talk to Reverend Swanson at camp. He says these are challenging times for everyone. As he’s opening up to Arthur, Dutch interrupts him.

Dutch tells Arthur they’re going to go north to New York. In the middle of this conversation, Arthur is again interrupted, this time by Charles and Eagle Flies.

Eagle Flies says a colonel has taken their horses, and without them, they will starve. Charles told them there’s no way they’re risking their lives over horses, but Dutch agrees to help.

Charles and Arthur leave with the crew to make sure “things don’t get out of hand.” Dutch said he needs to create “noise” to help with their plan. A conflict between the army and the “indians.”

Eventually, you’ll make it to some water, and meet up with one of Eagle Flies’ friends. You wait til nightfall, then leave in a canoe on the water.

Follow Eagle Flies’ boat, then paddle alongside the larger boat so you can all slip aboard.

They say not to kill anyone.

So equip your fists, sneak up behind the first guard, and press circle/b to perform a stealth knockout.

Now go up the stairs, and stealth knockout the guy at the right.

Now go back the way you came on the left side of the boat, then stealthily knock out one of the men playing poker at the front of the boat. Your friends will take care of the rest of them… with bullets.

Now you have to pull up an anchor, but since you don’t know how to work an anchor, blow it up with dynamite instead.

As soon as you do, Dutch looses control, and drives the boat into some rocks. The boat takes on water, but everyone is able to release the horses before it’s too late.

Now, swim toward the horses and lead them to shore. Unfortunately the guys you’re with tonight are jerks, and while they all work together to round up four horses to shore, they leave you on your own with three.

Mount one, and the other two should follow you. Head to the yellow mark on your map, a bit south west of you on the shore.

Dutch gets a bit rambunctious when you get to shore and rides off, eager to see the army’s fort.

Charles tries to convince Eagle Flies that this isn’t the way, and when he rides off, asks Arthur to speak with Rains Fall. Accepting the mission allows you to do the main mission Archeology For Beginners.