Unlocked: Complete Chapter 4’s “The Gilded Cage” and open Mayor Lemieux’s letter. This mission is initially only available at night between 10pm and 5am. Head to the mayor’s house in the northwest part of Saint Denis. After the cutscene, drive to the art gallery. Follow the professor from a safe distance until he takes a left and walks towards a fountain. Confront him here and beat/threaten him until his is intimidated. Return to Jean Marc to complete this part of the mission.

After completing the previous part, read Mayor Lemieux’s second letter and head to his house at night. Head to the highlighted area to the north of Saint Denis. Wait for the red coach to arrive, then hope on it. Intimidate Hector Fellowes to complete this part of the mission.

Head back to the mayor’s house the next night again. You will need to target Jean Marc, the same individual who accompanied you when you were taking care of Professor Shiftacre. Head to Rue de Zacharie that is south of the mayor’s home and confront Jean Marc.

Carry him back to the mayor’s house carefully without being detected by anyone. The park in front of you is a great way to do this. Use its northeast exit, then head west and finally north. You can follow the mayor back to his property, after which you are given a choice.

If you spare Jean Marc, you’ll gain honor. If you kill him, you’ll need to drop his body in the water and enjoy a permanent 10% discount in all Saint Denis shops.

Idealism and Pragmatism for Beginners is a multi-stage mission in Red Dead Redemption 2. Arthur can help the Mayor of Saint Denis to solve a variety of problems by relying on less legal methods of action. 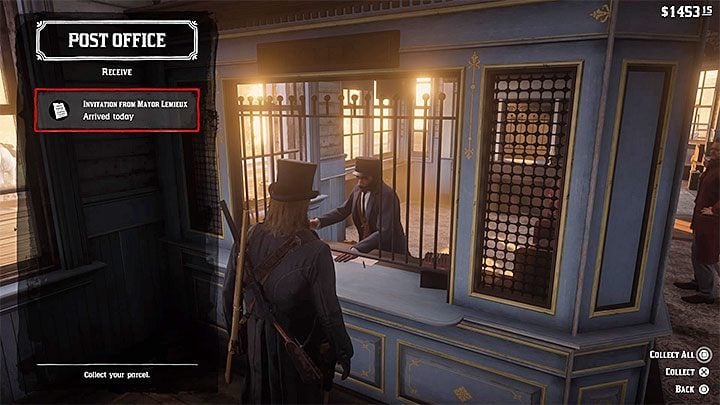 You can perform missions for mayor Henri Lemieux in chapter 4 of the game, but unblocking the task is quite troublesome. These are the requirements for unlocking this mission: 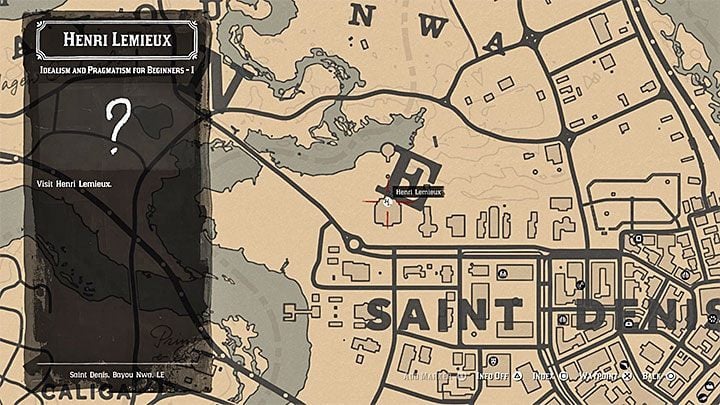 Then, read the Invitation from Mayor Lemieux from your inventory. Wait till the night falls. Only then on the map of Saint Denis will a marker of the place where the mission starts appear. (the picture above)

First mission from the mayor 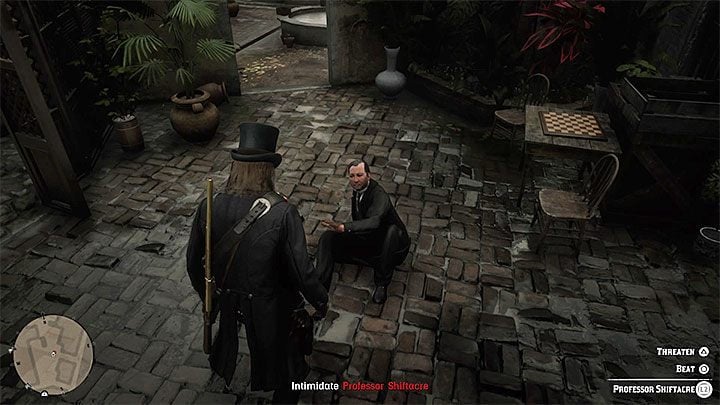 The mission starts at the back of the property. Tap on the glass door. Talk to Jean Marc, who will lead Arthur to the mayor. Listen to the details of the first job you can do for him.

Get in the car and start your journey to the art gallery. Once you’ve arrived, you’ll need to follow Professor Shiftacre. Keep a safe distance from him in order not to be detected. Do not approach the professor until he is in an isolated place. (the game will update the mission goal) You can only intimidate him by strangling him several times (do not hold the button for too long not to strangle him!) or beating him (negative points of honor). Return to Jean-March to complete this part of the mission.

Second mission from the mayor 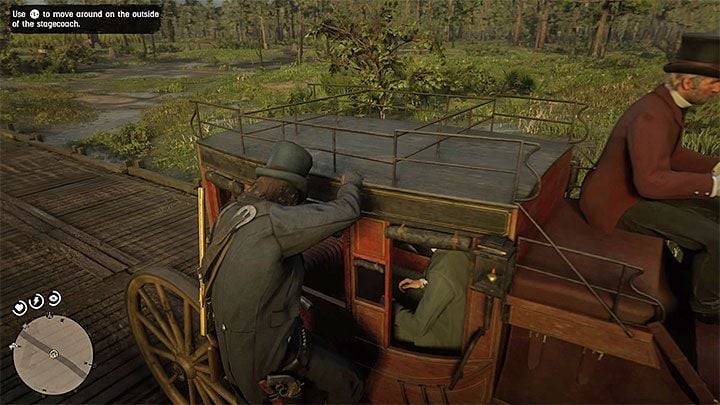 In order to advance to the second part of the mission, Arthur must again receive an invitation from the mayor by post. The invitation should arrive about 24 hours after the completion of the first part of the task. As before, reach the back entrance of the mayor’s property during the night hours. Listen to the details of the next task.

Head towards the road leading to the swamps. You have to approach the stagecoach on horseback, jump on it and move Arthur along its wall to get into its cabin. Arthur’s task is to intimidate Hector Fellows travelling by stagecoach. Press L2+R2 / LT+RT at the same time to catch him and pull him out of the stagecoach.

The third mission from the mayor 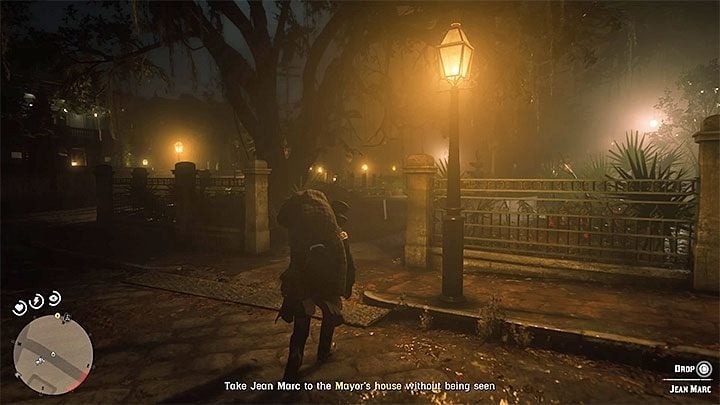 This time you don’t have to wait for a letter from the mayor. Return to his property at night and meet him directly. You will receive a book (Farm, Field and Falconry) as a gift. Lemieux wants to kidnap Jean Marc, to whom he has lost confidence and bring him secretly to the property.

Reach Jean-Marc’s home. After being stunned, go back to the property. Don’t use your horse and avoid being discovered by police officers patrolling the streets of the city. It’s a good idea to zoom in on the mini-map so you can see them from a greater distance. Go through the park shown in the picture. 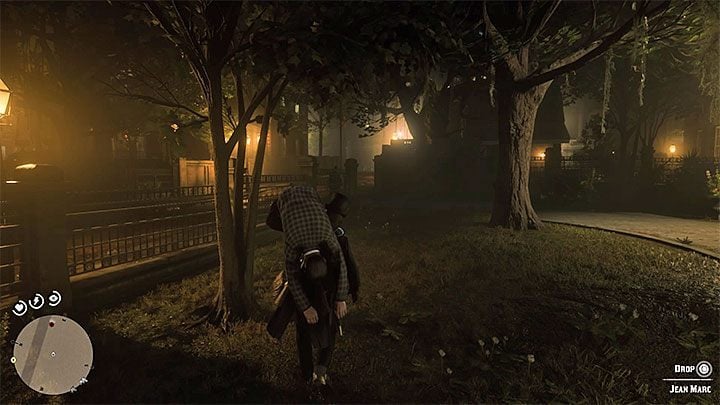 Reach the opposite end of the park and wait until the policeman patrolling the street along the park turns right. This will allow you to sneak behind his back and turn left.

Continue your journey towards the mayor’s property. On the way, watch out for the passing stagecoach – stop for a moment as soon as it appears. When you reach the property, go to the back of the property as the mayor wishes. 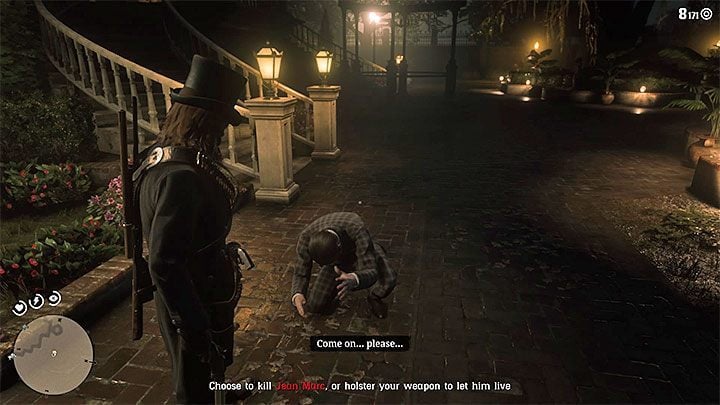 After watching the cut-scenes this mission can be completed in two ways: