Unlocked: Chapter 6 onward – For this stranger, you will need to head to the west of Annesburg. You will find him against a rock by O’Creagh’s Run. Talk to him, then head to the highlighted area on the map. You will find the man’s horse by the lake. Walk up to the horse and calm it. Once you have placated the horse, lead it back ot the veteran.

24 in-game hours after returning the horse, head during early morning to day time to the veteran’s cabin. Once inside the boat, row to the highlight area and equip your road with the special lure and start fishing. When your companion falls in the water, row to him to help him. Row to the fishing spot again to get the Northern Pike to bite. Pull the rod up when it does and reel gently to successfully fish the northern pike.

24 hours after the fishing experience ends, you can visit Hamish Sinclair once again in his cabin during the day. You will find yourself on the trail of a wolf. Use Eagle Eye to follow the trail. At the end of the path, you will be ambushed by ap ack of wolves.

Use shotguns and Dead Eye to deal with them effectively. Your last encounter with Hamish Sinclair can be triggered 24-hours after dealing with the wolves during the day time. After the cutscene, you will need to go after a legendary boar until its trail leads back to Hamish.

Inspect the dead wolf at the top of the nearby hill. When you hear gunshots, head to the highlighted area to find Hamish again. Shoot the boar multiple times in the head to take it out instantly during the Dead Eye moment. Take the trophy from the animal. You can choose to claim Hamish’s horse right now or take him to a stable to keep it safe to complete this stranger quest.

The Veteran is the title of one of the side missions in Red Dead Redemption 2. In this multi-part task, Arthur befriends Hamish Sinclair, a disabled war veteran. The main character can go fishing with the veteran and embark on several hunting trips together. 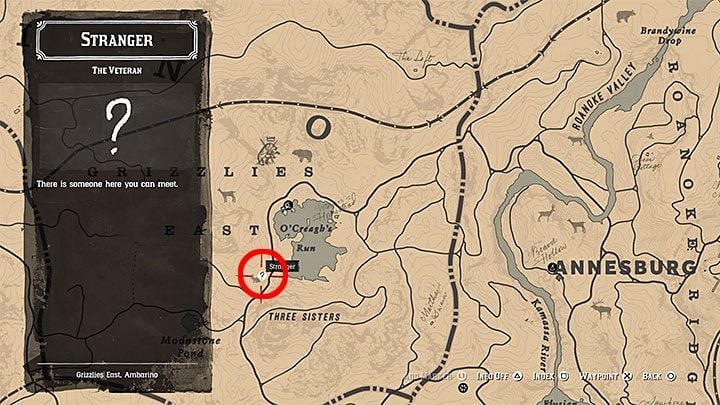 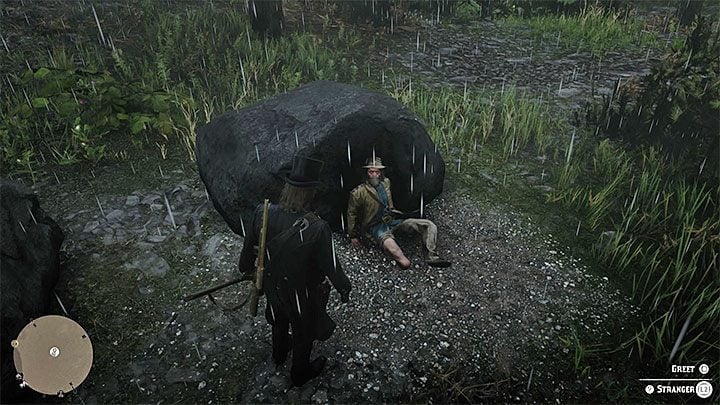 You can find the veteran while playing chapter 6 of the story campaign. Explore the area around O’Creagh’s Run west of the town of Annesburg. You’ll find Hamish leaning against a huge boulder and he’ll need help. 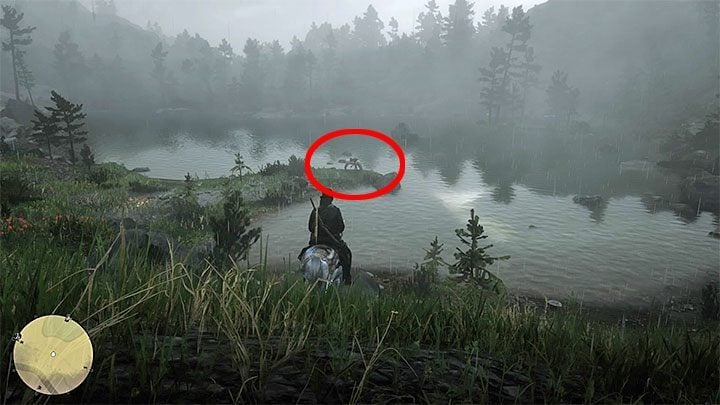 The prosthesis is carried by the veteran’s horse, Buell. Look for the horse in the direction of a nearby lake. The place where the horse is found is depicted in the screenshot. Get closer to the animal and calm it down enough to be able to lead it. Return with the horse to Hamish. 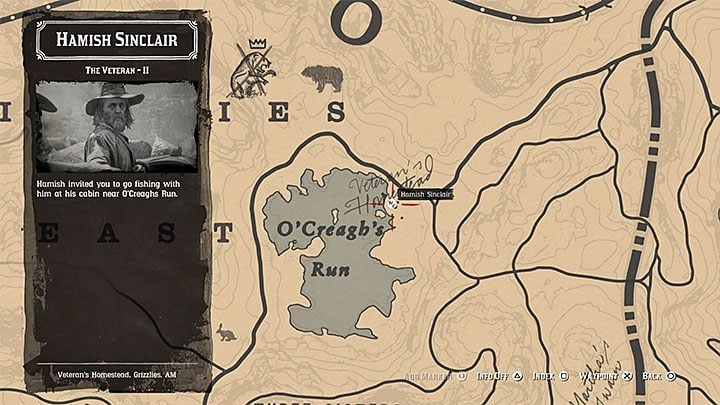 Hamish will invite the hero to fish, but you can’t take care of it right away. Wait about one full day. A new mission marker will appear at the lake – it’s the Veteran’s Homestead. 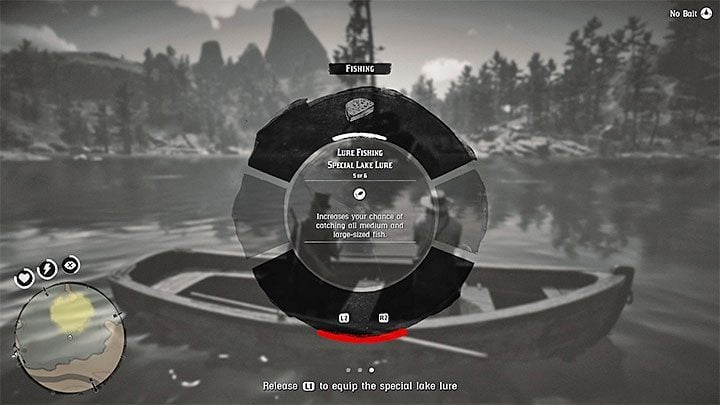 When you reach the hut, knock on the door. Hamish will propose you join him on a fishing trip. Its aim will be to catch a legendary specimen of The Great Tyrant. Climb into the boat and take it to a marked spot on the lake.

Hamish will give you a special type of lure for catching legendary fish from the lakes – Special Lake Lure. Set it as active. During the first attempt to catch the fish, Hamish will have a small accident and fall into the water. Stop fishing and drag him back on board. 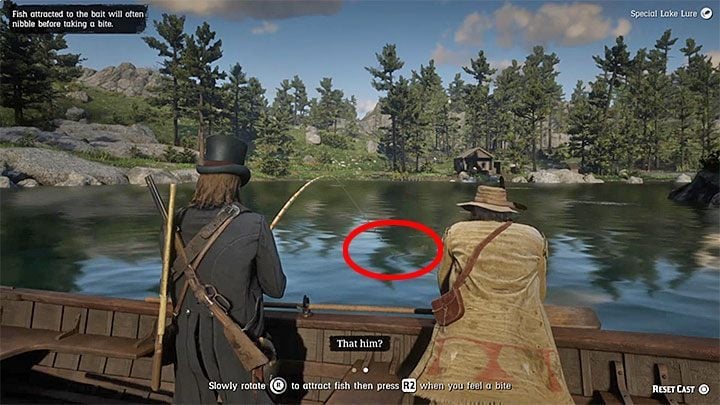 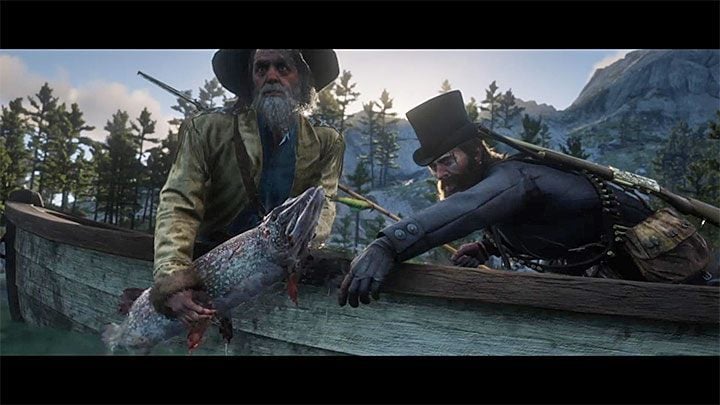 Reach a new area on the lake. Only now will you start THE fishing. Catching the legendary Great Tyrant is unfortunately much more difficult than hooking an “ordinary” fish. It’s a much stronger specimen and if you rely on standard activities connected with catching fish with a lure, you’ll have to wrestle with the fish for a very long time.

Fortunately, there is also an alternative method to catch the legendary fish much easier. After you cast the rod and the lure lands in the water, start retrieving the line much faster while waiting for the fish to be caught with the lure. If you are lucky, The Great Tyrant catch the lure after most of the line has been rolled up (see example in picture 1). This will allow you to shorten the time of wrestling with the or even trigger the cut-scene right away.

Return to shore with Hamish to complete the second part of the mission. It is worth mentioning that catching the legendary great tyrant is one of the ways to get the achievement It was THIS big! awarded for catching a sufficiently big fish.

Again, you must wait at least one full day for the new mission marker to appear next to the veteran’s hut. This time Hamish will tell you about a she-wolf that appears around his farm. He will decide to hunt her down.

Get on the horse and follow Hamish. After some time you will leave the horses. You can take the initiative and use Eagle Eye to find the wolf’s footprints, or let Hamish track down the animal and simply follow him. 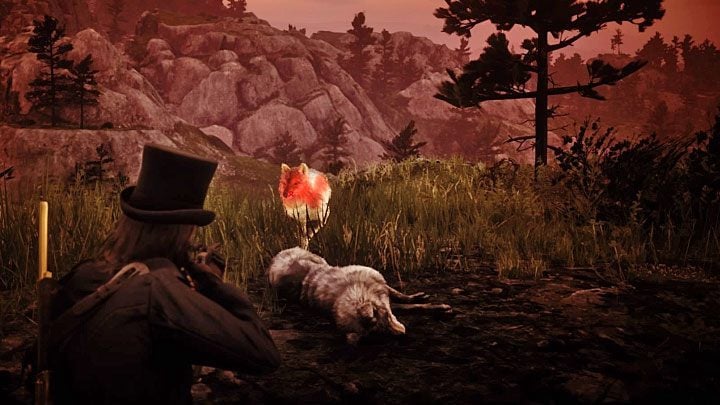 Soon after reaching the edge of the cliff you will get an opportunity to shoot the wolf. It turns out that it was a trap and the heroes will be attacked by several other wolves. Be ready to eliminate them quickly and efficiently, which can, of course, be achieved by Dead Eye.

The biggest wolf will attack last. He will knock Arthur down on the ground. Throw him off the hero and shoot him quickly before he jumps again. As a gift from Hamish, you will receive a good quality wolf skin. Of course, you can also skin other wolves that have taken part in the attack. 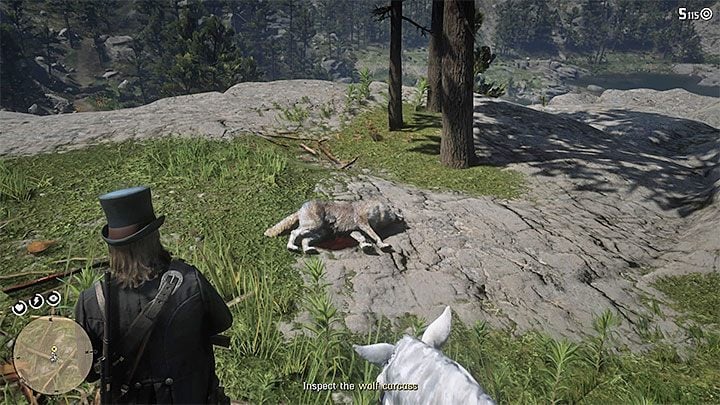 Likewise, wait for about 24 hours. When you reach the veteran’s hut and watch the new cut-scene, you have to go hunting for the huge wild boar that has appeared in the area. Pursue the boar on foot. After it escapes Arthur, use the Eagle Eye to locate its trail. At the same time, Hamish will come with the horses and you will be able to continue the search on horseback.

Follow the boar’s trail. Hamish will soon suggest splitting up. Choose the path leading to the top of the mountain. You must reach the corpse of a wolf and investigate it closely. 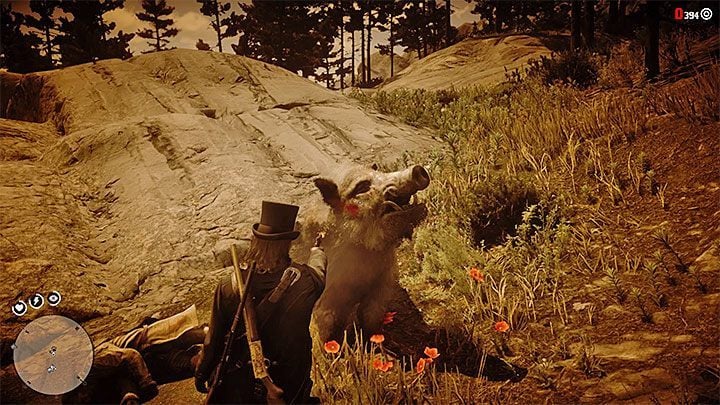 After hearing shots, go to the area that the veteran was investigating. On arrival, you will find the dying Hamish. Expect a huge wild boar to attack you. Empty the magazine to make sure the boar dies before it comes close to Arthur. 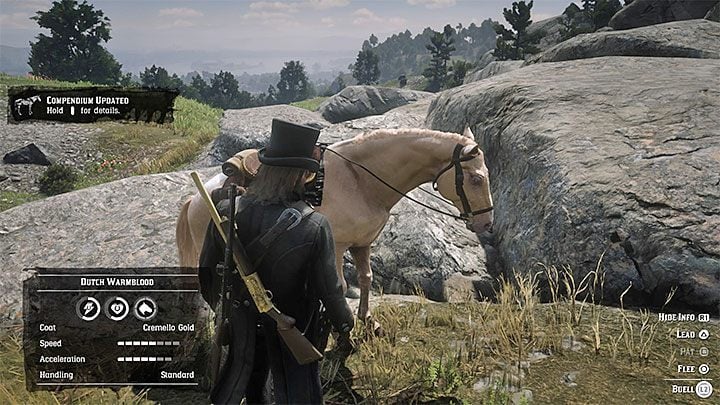 Interact with the defeated boar to get the trophy. You can also take care of your veteran’s horse. When you place a saddle on it, it will become Arthur’s horse – his statistics are shown in the picture above.