Visiting Hours is one of the main missions available in Red Dead Redemption 2. Arthur and Sadie are sailing to Sisika island. They want to rescue John.

How to get a gold medal in Visiting Hours? 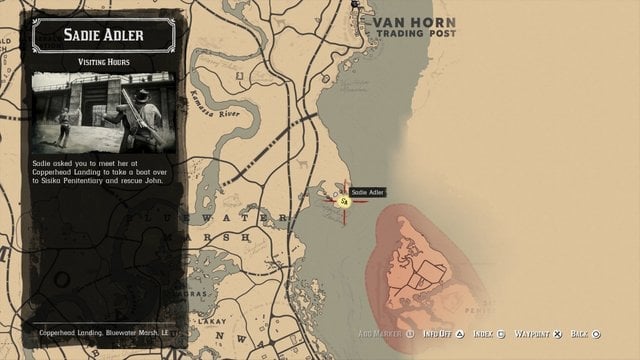 When you get there, Sadie will be telling Abigail Roberts she can’t come with. Abigail will eventually agree to be left behind. 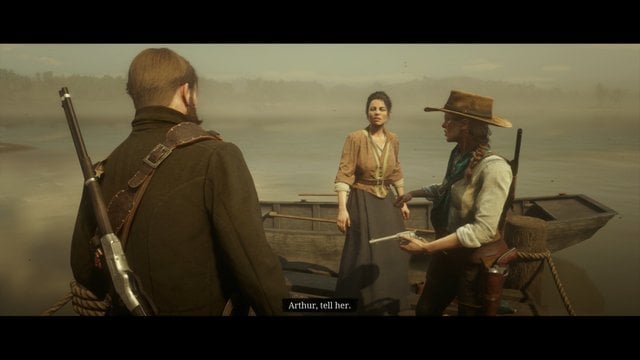 Arthur gets in the row boat with Sadie, and the two of them make it to the island without issue.

Stay low, and head south with Sadie toward the watch tower. When you get there, climb the ladder, and make sure to equip a handheld knife. 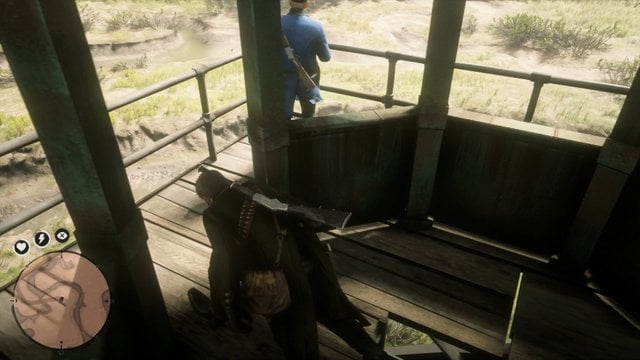 Use circle/b to stealth kill the guard at the top of the tower.

Sadie will look out with binoculars, and tell Arthur to pick up the rifle and look through the scope.

He’s in the group directly south in front of the barn, to the right of the guard. Sadie will want you to snipe them from the tower. 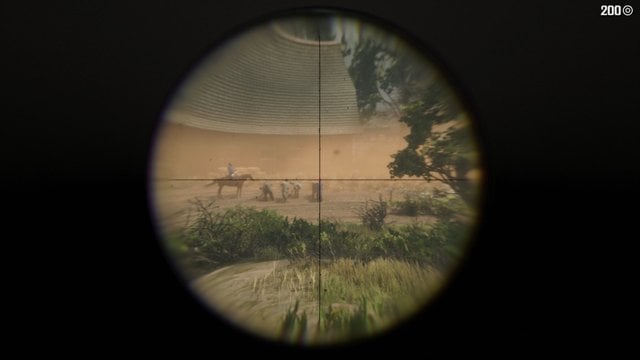 Get headshots on both Prison Guards when sniping from the tower here. To do so, follow these steps:

After killing them, Sadie will exclaim that she didn’t think that was actually John. Follow her down the ladder and across the field to the downed guards. 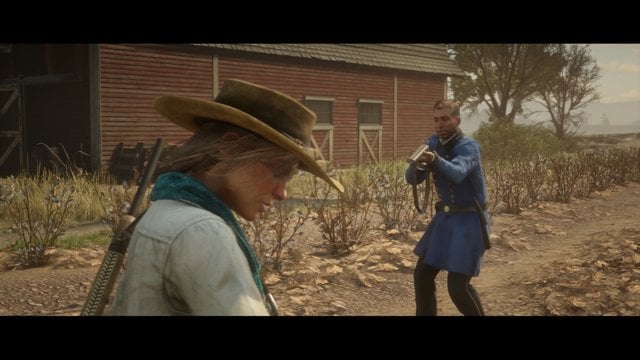 While Sadie is questioning the one who’s still alive, a guard sneaks up and points a gun at her. But, Arthur is there, points his gun at him, and takes him hostage.

Walk slowly toward the entrance of the prison. Sadie will knock out guards as you go. 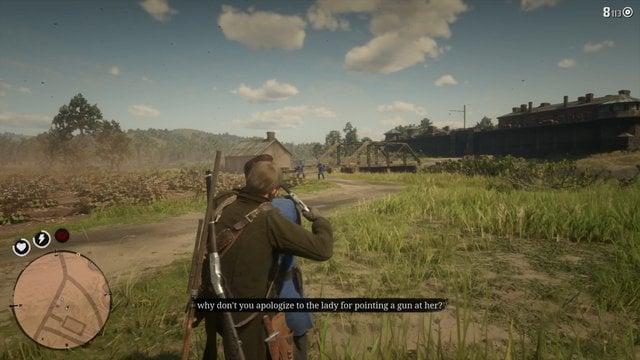 Once you get to the entrance of the prison, Arthur will hold a gun to the man’s head and demand they trade John for him.

Eventually, they relent, and bring John to you. Sadie releases him from his ankle shackles. 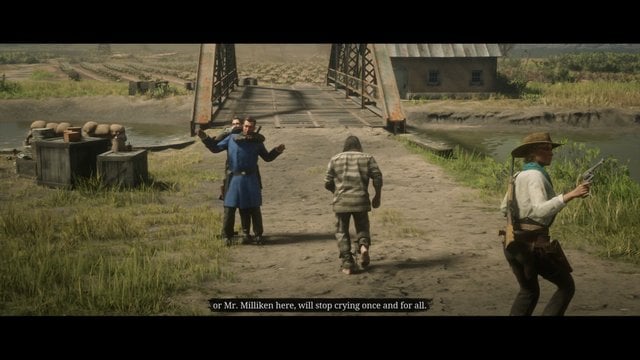 Now, make a run for it. Cross the bridge and take cover behind some boxes. You can see the guards from there. 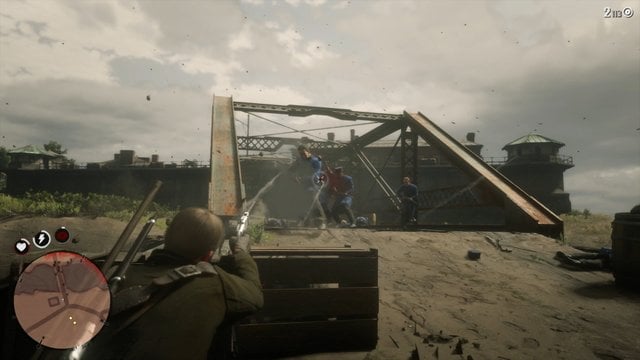 Kill while moving toward the boat – keeping relatively close to John and Sadie – so you will proc the next goal until you reach the boat.

Once you get far enough, Sadie will tell you to hold them off. Keep doing what you’ve been doing until you get into the boat. 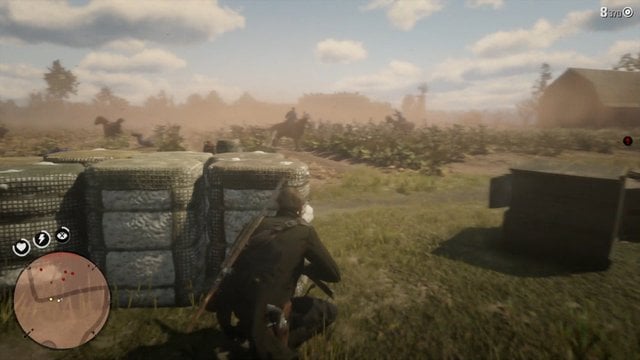 Once you’re in the boat, crouch to get better accuracy, then use Dead Eye to kill the guards on shore.

Once you’ve killed enough of them, a cutscene will start of the three of you getting out of the boat. 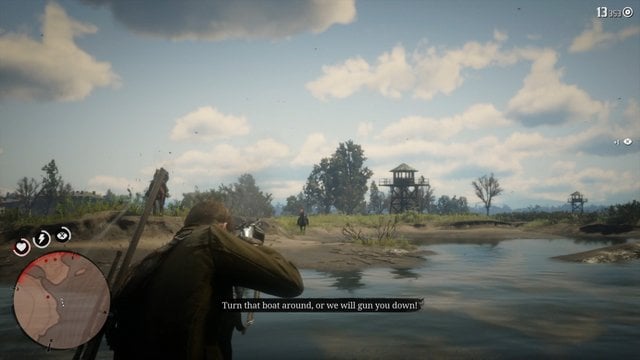 Mount your horse and follow Sadie and John on horseback to Beaver Hollow. Arthur will start telling John about all that has happened while he’s been detained. 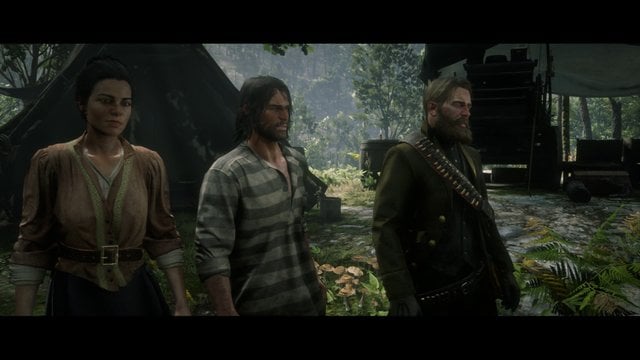 After arriving at the camp, Dutch won’t have many nice things to say. He claims he had a plan, and says the law will now be on all of them, to hang them all, instead of just John.

Dutch has a point. When you resume RDR2, a huge swath of the map will be drenched in red, marking you and your gang wanted, dead or alive.