Remnant From the Ashes How to Beat Ancient Construct

Remnant From the Ashes Ancient Construct

How to Beat Ancient Construct 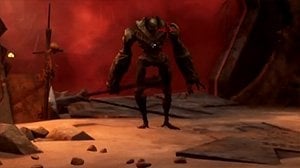 To trigger the boss fight with the Ancient Construct, you’ll need to interact with the figure shown in the image below. You can do this outside the Wasteland Merchant’s shop by inserting Control Rod into the inanimate creature.

The boss itself is slow and weak, but the turrets helping him are numerous. These continue to fire at you chipping away at your health. Thus, our advice is to shoot down these turrets first. Since there are many turrets, you can deal with them methodologically by taking cover behind the metal sheets and taking them off one by one.

The Ancient Construct yields a long cleaver like weapon which it can use to hurl projectiles at you. It can also charge at you with a running melee attack so dodge accordingly. A slightly ranged attack is when it swings the blade while leaving hold of it. Roll backwards when this attack is initiated. Deal damage when he completes performing an attack, as you have an opportune moment at these points.