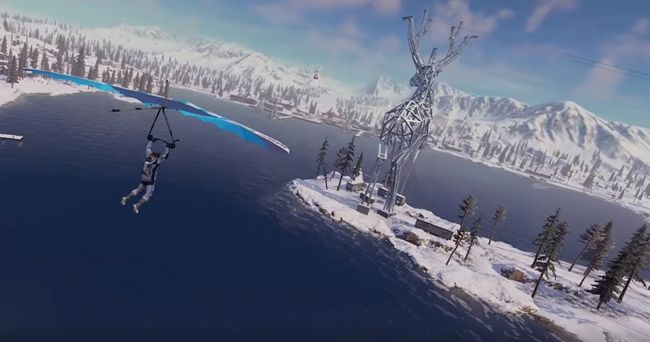 Tips and Tricks for Beginners

1) You can switch directions on the zipline simply by pressing backwards (S) while riding; useful if you end up taking the wrong zipline, or realize your about to drop into a big firefight.

2) You can jump off the zipline as soon as your character lifts their legs up; they perform an animation to indicate when you are able to jump off. This can mean getting back to your gun slightly quicker than running the zipline until the end of the line.

3) If you swap a similar type weapon (SMG for another SMG, AR for an AR, etc) it will automatically attach the available attachments you had on your previously equipped weapon.

4) If you selected the Hangglider kit, you carry the least amount of weight as compared to the Snowboard (additional 50 lbs), and the Grapple/Zipline (+100, or 50lbs more than Snowboard) However you can drop your pistol (and ammo) if you need the additional free weight to carry more ammunition.

5) I find footstep noise to be key to winning close range firefights; keeping that in mind you can Sprint/Run/Walk both standing and whilst crouching. Meaning you can move a little faster while crouched, or conversely; move even more quietly if you’re in the same house for example.

6) This may or may not seem obvious, but you don’t need to hold down E or ‘Use’ when completing an action – I thought you had to, but pressing it again will actually cancel the action.

7) You can move (albeit slowly) while healing. So, if you’re near a corner, you can start the healing process a little sooner knowing that you can still get behind that cover/corner.

8) You can select any spawn point during the initial countdown; this can be useful for blocking a hot spot, and then clicking somwhere else during the final second.

9) Take note of where people are spawning, as if you spawn in a very secluded corner of the map, you may be forcing yourself to move quite a distance when the first zone appears.

10) The Hangider isn’t effected by trees, so don’t worry about constantly correcting your flight path to avoid them.

11) The game does have bullet drop, so get familiar with the snipers rifles, and the scopes to know the distance involved.

12) If you press Q at a target it puts a marker there and indicates the distance. This is very useful when playing Duos/Squads to let your teammate(s) know where the enemy is, or where to meet up, or get to.

13) Silenced weapons are extremely quiet – to the point where you can be within 30 ft of your opponent and they may not immediately know exactly where they are being targeted from. Use this to your advantage as you can fire off a quick burst, get behind cover, and if they lack cover (use at your own discretion) know that the enemy only has a vague idea – behind, left, etc.; of where you’re hitting them from.

*Please note that this is purely anecdotal speculation on my part – I need to do further testing.

15) Auto-Run by Default is =, consider using it if you have to “hoof it” for quite a distance. Consider re-mapping it if you use it alot.

16) Smoke grenades aren’t just for obstructing vision; they emit a ‘hissing’ noise while active, and this can mask your footsteps if you know an enemy is nearby, and need that added stealth.

17) If you’re in a vehicle with multiple seats, you can switch seats, not only to fire out, but you can heal as well!

18) Attachments that are equipped don’t appear to add to your overall weight, as compared to attachments you carry. From what I’ve noticed, once equipped to weapon the indicated weight is subtracted from my current carry weight.

19) You can use Sprint to climb ladders faster, and also to slide down them.

20) SMG’s and pistols allow signifcantly faster movement while ADS’ing than do assault rifles or sniper rifles. Useful if you are trying to peak a corner and quickly get back into cover or just make yourself a harder target.

21) In addition to being able to use SMG while on a glider, you can also use them while driving snowmobiles. So can the passenger. So you can have the driver of the snowmobile and the passenger both weidling SMG for deadly drive-by potential.

22) Cars do not always smoke prior to blowing up. So do not rely on that as an indicator. If your vehicle is getting shot at a lot, abandon it.

23) If you get out of a moving vehicle you will take damage, the faster it was moving the more damage you’ll receive. However, sometimes this is better than remaining in a vehicle that may simply explode.

24) Hold CTRL and drag ammo/items to the center of the screen in order to drop an indicated number as it’s not well-explained how to do this in-game. You can also type in the amount you wish to drop.

25) You can deploy the hangglider by tapping spacebar again (no need for F).

26) Snowboard goes slow as hell on paved roads. You need snow to pick up speed.

27) On a flat plane, you go faster pedaling the snowboard (pushing your foot against the ground) than you do sprinting. Tested in squads. So if you have the board, it’s generally better to use the board to cross open areas, unless the terrain is going uphill, in which case going on foot is better.

28) The mini-map tells you where the zipline points are (squares for the hubs and solid lines for the ziplines themselves).

29) The mini-map tells you where climbable walls are (indicated by a red pickaxe icon).

30) The vector is a deadly CQC weapon. Insane fire rate, minimal recoil. Great weapon for city fighting – despite its low mag count; thus the extended clip is usually required, as 13 bullets will disappear in no time

31) The 7, 8, and 9 keys on the keyboard use your medits, first aids, and bandages. I would consider mapping these to side mouse buttons for easy access.

32) By default, voice chat is set to squad only. If you want to proxy chat enemies, set it to “All”

33) The Snowboard appears to increase the height at which you take fall damage.

34) Smoke grenades to do not rise high enough vertically to completely obfuscate the helicopter ladder. So don’t rely on smoking out the ladder for your safe ascent.

35) If you are in a ski lift (or vehicle with multiple seat), use CTRL+1,2,3,4 to shift seats. If you ADS, you can get a pretty good view of where you are going and potential enemies. You can also heal while in a passenger seat.